It so happens in life that at times the least expected things will offer the highest level of excitement. Of course, there is nothing wrong in it. This time, Yamaha offered me such a feel. It was not with the company’s Deluxe segment bikes for India like R15 or Fazer or for that matter, even the FZ series of bikes. 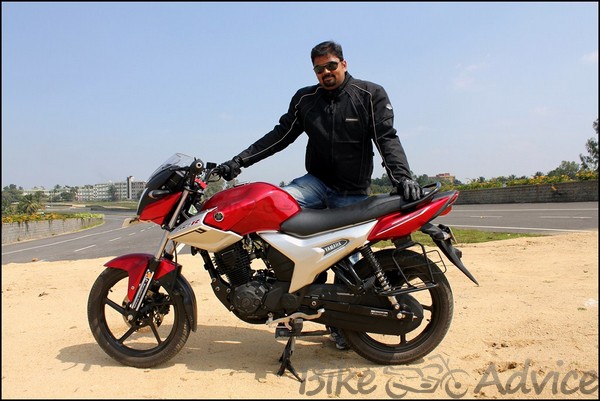 This time it’s the Yamaha SZ-R which offered an exhilarating feel for me. Yamaha has always had the guts to come up with a product that tends to change the game soon after its launch.

Many of our readers in BikeAdvice were probing me to review this bike which is how the idea of choosing the Yamaha SZ begun. If I’ve to explain the ability and capability of the SZ series of bikes, this is how I need to go ahead as.

This particular series of bike had received 5 awards in the years 2010 and 2011 from various sources put together.  Here is the list of it. 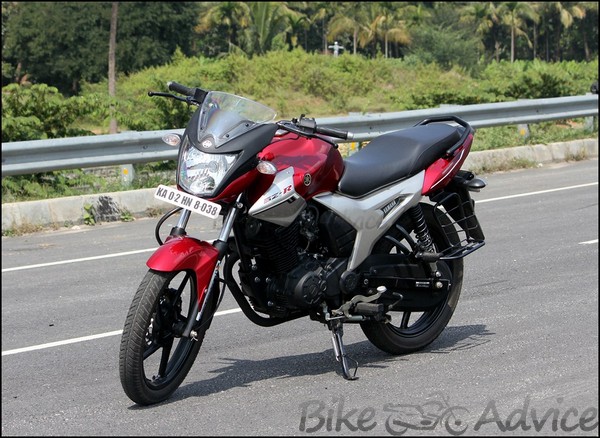 The SX series of bikes from Yamaha comprises of 3 models within the bracket. The SZ, SZ-X and SZ-R are the finest range from this brand. To throw more light on the models, the SZ is the basic one among the above mentioned three. It has no disc brakes, no Electric Start and even lacks the aesthetically designed air scoop. This implies the fact that this is the least promoted variant of the entire lot. 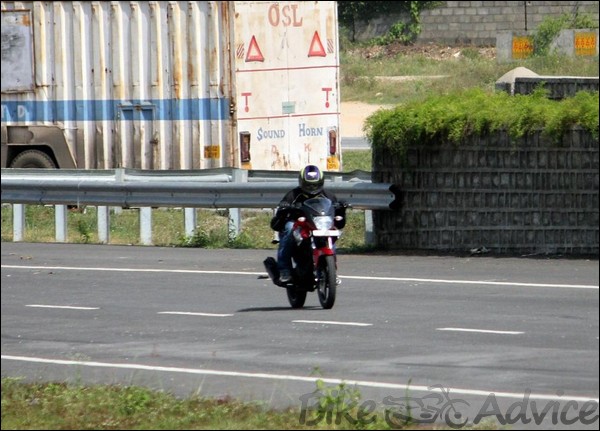 This is in fact very similar to the LX variant in most of the Maruti Suzuki cars. Neither the dealers nor the company will promote these variants. Coming to the SZ-X, this variant boasts of an air scoop which offers it a cool look differentiating itself heavily from the bare SZ. It also has an Electric Start facility fitted onto it. Also, if you can notice this variant on road, you’ll be able to notice the fact that the body color and the air intake scoop color will be the same as against the SZ-R which is the end variant. 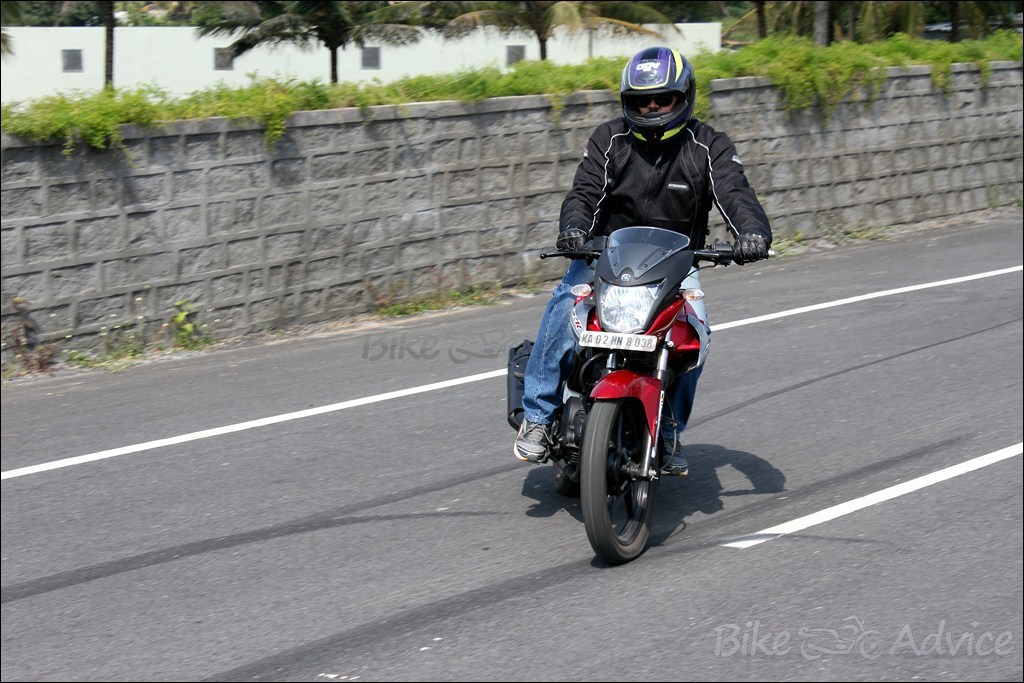 Coming to the one we tested which is the SZ-R, it boasts of front disc brakes, Electric start and an air scoop which differentiated itself from the body color through a paintjob. The best thing about the SZ series or with all Yamahas is the fact that all variants of SZ series comes pre fitted with alloy wheels as part of its standard package. 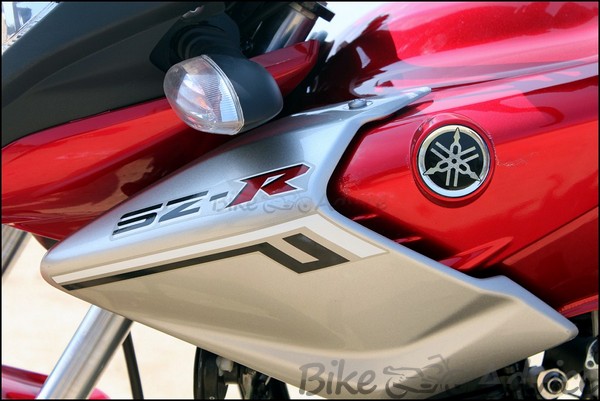 Reviewing a bike these days has become very similar to reviewing a car or for that matter any other four wheeler. See, we’ve even started talking about variants and the distinguishables between them. Hmmm, I’m loving it!

The SZ-R finds itself positioned in a very unique manner. It gets a seat for itself in an all new segment referred to as a ‘Powerful City Commuting Bike’.  I’m gonna add one word at the front which is ‘Sporty’. Indians have now stared to feel the need of a bike which is a performance bike but restricted to the need of catering commuting purpose alone.

Gone are the days when people wanted a 100cc bike which would enable transporting them from Point A to Point B and then back. It’s become a style statement to own a 150cc bike for city usage knowing the fact that you’ll never be able to recognize its potential as long as you stay under the control of traffic signals intense traffic. This need is what Yamaha took advantage of. 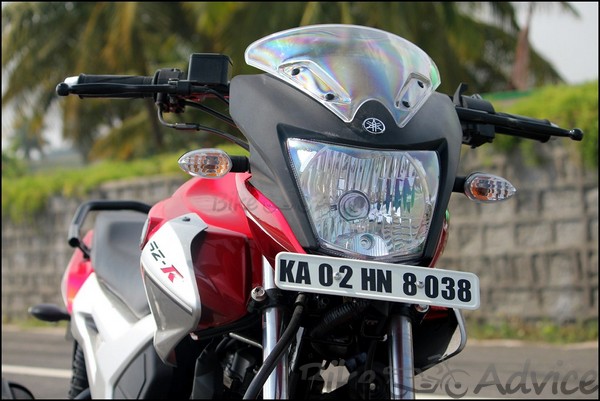 The SZ-R is not one of the hottest looking chicks in the Indian market. It’s for sure, not a head – turner. But, it’s got the ability to impress you right at the first sight. The size is not macho but makes you feel that it’s nimble enough which will be ideal for commuting and for light highway drives as well. The headlamp fairing comprises of two colors.

Major area is dominated by a matte black finish which offers a classy look from the front half of the bike. The rear quarter finishes in a sharp manner which offers a decent look from the rear part as well. These two are the style quotients which best defines this bike. The sir scoops are really cool on the bike. The Grab rail is definitely a ‘turn off’ for the SZ series of bikes. Unlike most other bikes in the India market, it is designed for utilitarian purpose and to boost aesthetics at all. This could have been taken care of.

Anyways, it’s not a major drawback on the SZ-R. Let’s now get to the highlight of the SX-R. It is the muffler cover over the exhaust. It reminds me of the massive machine gun used by Arnold Schwarzenegger in the Terminator. Stunning design and awesome engineering. It is in a way hotter than the R15 also. Seriously sexy man! 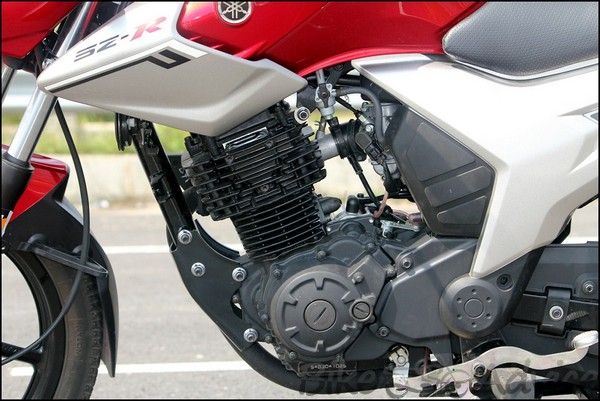 The powermill of this bike is same as that of FZ series of bikes. But, the engine is de-tuned for less power and for improved fuel efficiency. The engine is Air cooled, 4 stroke, SOHC, 2-Valved with a displacement of 153 cc. The engine is capable of pumping a max. Output of 12.1PS @ 7500rpm and a max. Torque of 12.8Nm @ 4500rpm. The engine is mounted to a 5 speed gearbox which is crispy to be operated and is par with the other bikes from the Yamaha stable.

The seating position is pretty upright which is not ‘The Best’ compared with its rivals in the market. But having been positioned as a commuter series of bikes, the seating and the position is nothing to grumble about in any of the aspect. I’ll have to mention the point here that SZ-R is not the bike for you if at all you expect a bike with ‘Lean Forward’ position so as to offer a catchy look as you ride your bike. 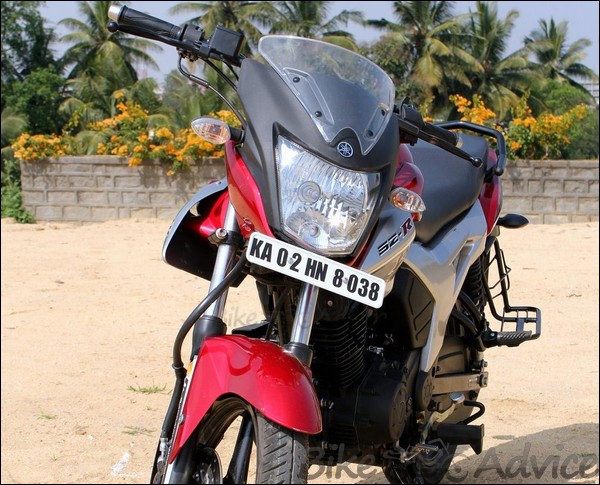 However, for highway rides and other long cruises the seat is not at all suited. For occasional rides, it just might be fair enough. The reason for the uncomfortability is because of the short gap between the seat and the handle bar. But to remind you again, this is the bike that is designed keeping the regular commuters and occasional or light highway riders in mind. 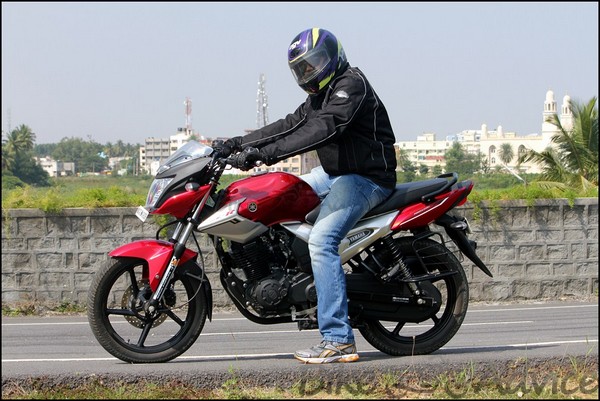 This bike is really fun to handle and the city dwellers will find it a boon to spend time with. It is very nimble to flick along the traffic to make way for itself where all its big bros get stuck.  The bike is not too tall which will make handling a little tough for tall people to take control of.

The handle bar is pretty firm so that there are no vibes observed. To mention a word on the suspension, there is nothing great to specify specifically. But, the front Telescopic suspension and the rear Swingarm suspension does its function perfectly.

On the whole, you’ll be impressed with the riding impressions of the Yamaha SZ-R. The tyres are also cool enough to handle the city roads. The dimension of the front tyre is 2.75-17 41P and that of the rear is 100/90-17 55P. Both these tyres offer sufficient grip that the bike requires. 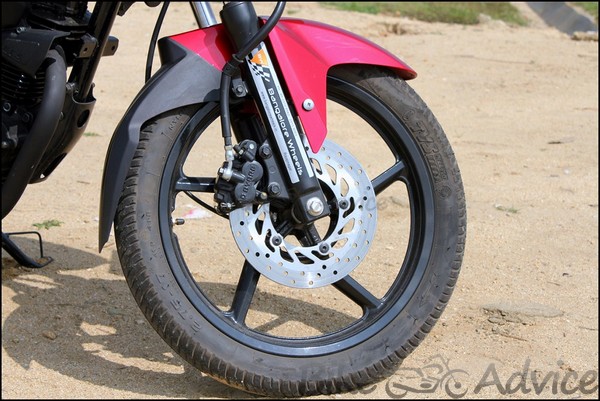 The SZ-R houses a single disc at the front and the regular drum brake for the rear. Yamaha’s brakes are always found to be very effective & impressive and the SZ-R is no exception for it. As I took the bike for a review to the NICE (Nandi Infrastructure Corridor Enterprises Ltd) which is the connecting road between the Garden City – Bangalore and Sandal City – Mysore with Sharat, our new photographer as the pillion rider we had an ‘Emergency Braking’ situation which arose.

There was a guy in an Activa who was riding in front of us and all of a sudden he turned his vehicle   to the right as we tried to overtake him. I was forced to brake very hard at that point to avoid hitting him and the SZ-R proved its braking potential to the fullest. I wouldn’t mind giving 100 per cent marks to the Braking aspect of the Yamaha SZ-R.

I do know that this is an aspect worth considering for a bike like SZ which caters the need of city commuters alone. But still, there is a reason why I still write on this particular aspect. 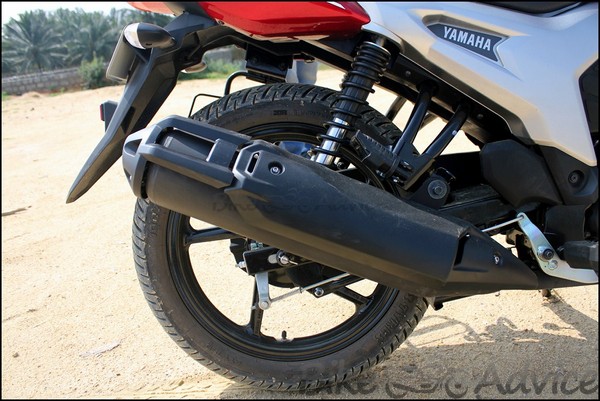 Way back along the NICE road back to Bangalore, there was a small stretch of road which made me reminded of the racetrack in a flash. It was in the shape of ‘S’ with two stunning curves.

Though we were two in number, that stretch prompted me so much that I leaned my bike to the fullest and I both of us were really stunned on the response the SZ-R offered us in return. I leaned till the side stand gave a scratching noise and the bike was still stable. This was something I least expected from this bike. 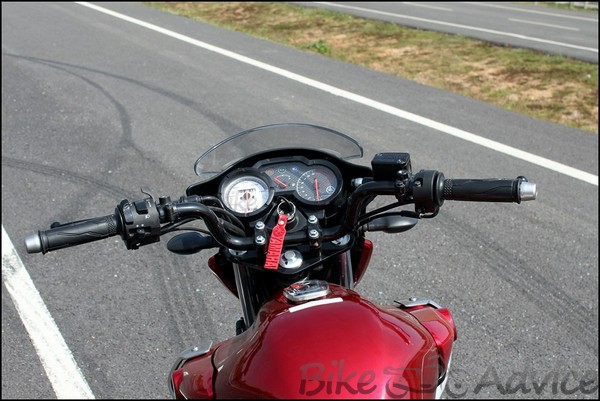 However there are very few minor issues with this bike, as with every other bike. The entire fuel tank along with the air scoops on the sides are very loose that they move pretty freely if shaken. I, in fact had a doubt if that was the case only with the bike I reviewed or with all others as well.

So, as soon as I returned back my bike to the Bangalore Wheels, I tried shaking a couple of other SZ models and I found that this was the case with all bikes. This is a very minor problem which Yamaha could t to reach the showrooms. But, this could have been easily rectified. Hope it does for the ones which are in the production stage. But, note that these shakes create no unwanted vibrations as you ride it. So, you don’t get to feel anything about it till you notice this problem. 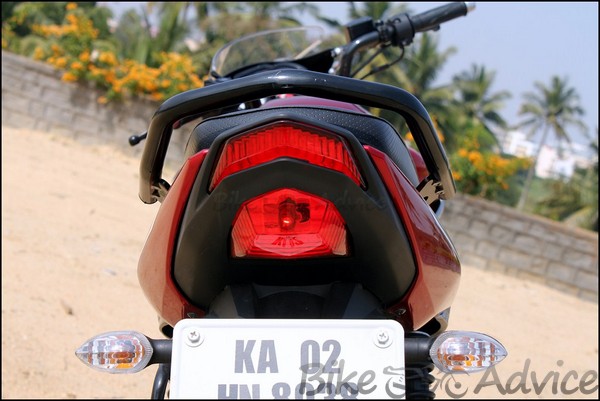 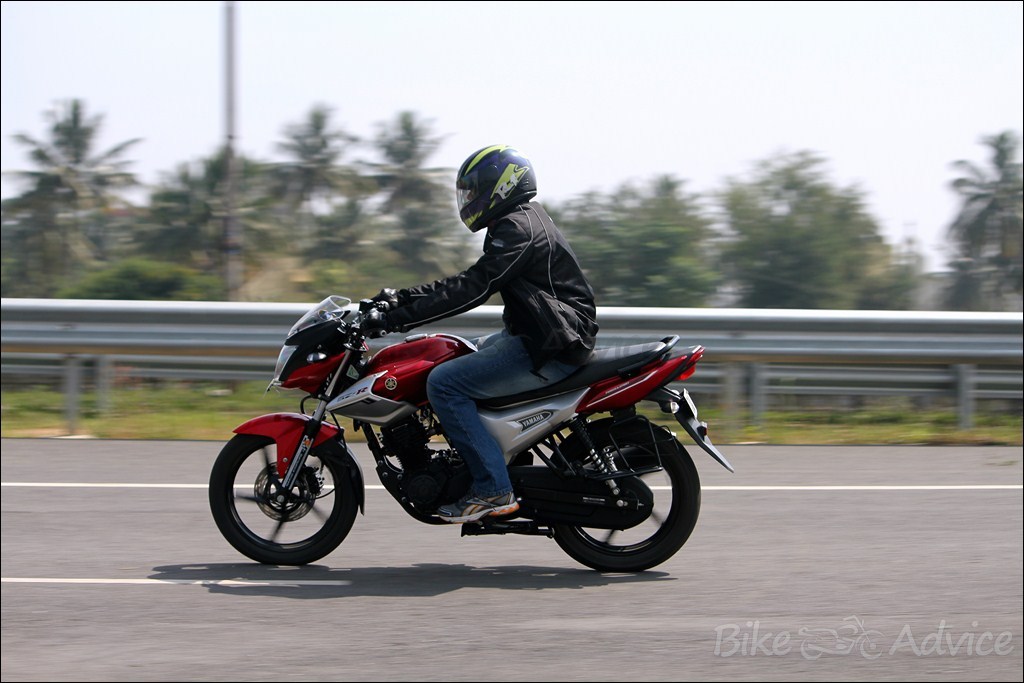 The Yamaha SZ-R is available in three different colour schemes namely Quality Blue, Quality Red and Quality Black. As mentioned above, all the colours on SZ-R has a pinch of grey on the air scoops and along the sides as well.

On The Whole, What Is It?

To convey in a nutshell, the Yamaha SZ-R is a Powerful Commuter as I’ve been mentioning right from the beginning of the review. Yamaha has not only found a new segment to position its bike but has also come up with this wonderful product to sustain for a long time in the Indian market. 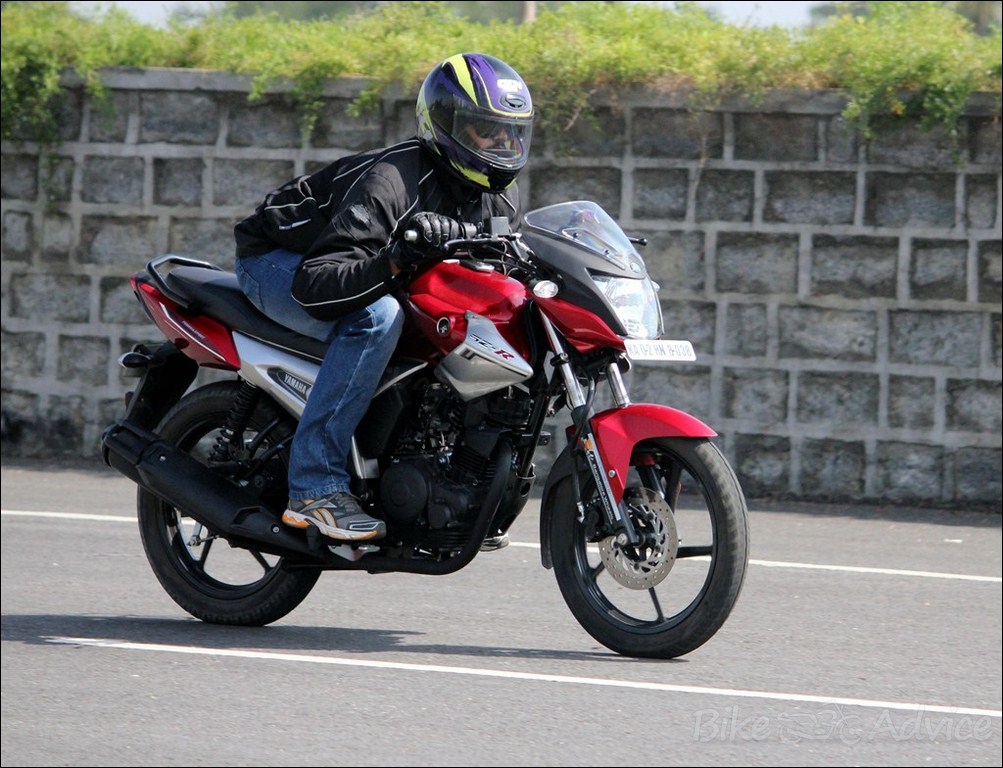 BikeAdvice Rating: This is indeed a segment leader and with the intensity of awards it has received in a shortwhile in the Indian market, it certainly deserves 4.5/ 5.

BikeAdvice thanks Banagalore Wheels, the authorized Yamaha showroom located in Rajaji Nagar, Bangalore for their consistent support to us by providing the required bikes for our review as and when we need them.

You can view more photos from this test ride here.

Reviewed and Written by M.Naren
Photography by Sharat Aryan 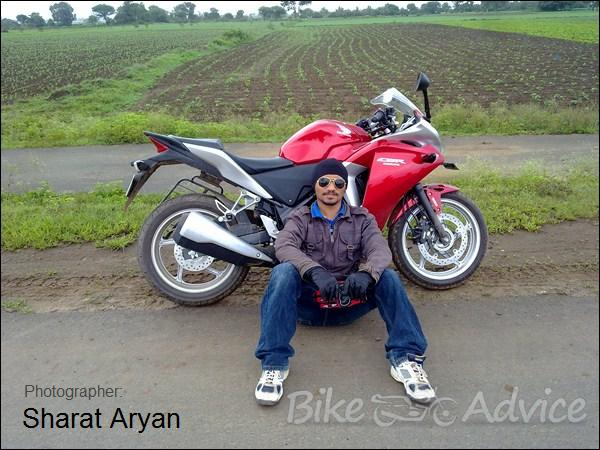