Hi everyone, it is Sumon Datta. I am opting for my first review in BikeAdvice.in. I started browsing this site around January 2011. I am from Bangladesh. I studied Agricultural Engineering specializing in Civil Engineering in Bangladesh Agricultural University. Recently I bought a Yamaha SS125 Gladiator. 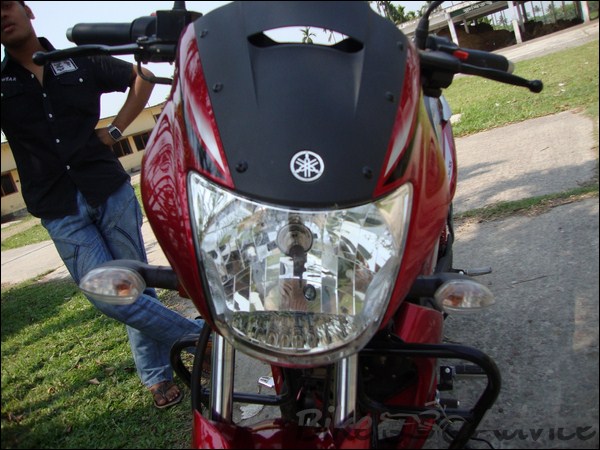 Biking History: Enough for introduction. Now I am going to tell my biking history to you all which is very small. In just few days in January, suddenly I was attracted to bikes in my city that is Mymensingh. There is a lot of bikes in Mymensingh. Before that I had no interest in bikes. But when some of my friends started to buy bikes, I was somewhat jealous to see them riding. Therefore, I wanted to buy a bike of my own.

Now the thing was that – I wasn’t able to ride bicycle the then in January 2011. But when I fell love with bikes, I instantly leant riding bicycle which is mandatory for balance. Then was the learning period of riding bikes. Despite of being 21, I couldn’t ride bikes – that made me look measurable. So I started to learn riding bikes from a university friend who owns a Bajaj Discover 100cc. 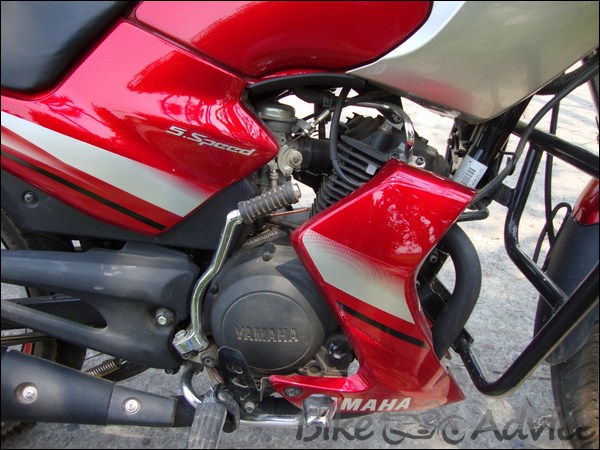 While learning on weekends I only wished to buy a bike. After almost 2 weeks I had somewhat good control of a bike. As Mymensingh is too crowded and my university was outside of town, I rode in city for only 2 times to make sure I can ride in traffic. I did well.

Now the decision period came only after 3 weeks of my bike learning. To mention one thing, my mother and father both have been very supportive for my entire life being only son of them. I just love them. When I proposed for bike in home, they were very worried to lose their only son in a probable accident which is very likely happens in Mymensingh. But I assured them about everything about safety.

Then while making decision I went through some specifications of mine. They were:

Now the options I had were:

Then the decision making day came. From my recommendations I just test drove Discover 100cc which has straight gears. The dropped bikes were for my dislikes and some features.

Pulsar 135LS: It is a very good bike with a lot of power for a 135cc bike which out-casted many 150cc bikes in acceleration. But I hated the finishing looks and hated the silencer. Also sitting position wasn’t near comfortable that’s why I had to drop it. 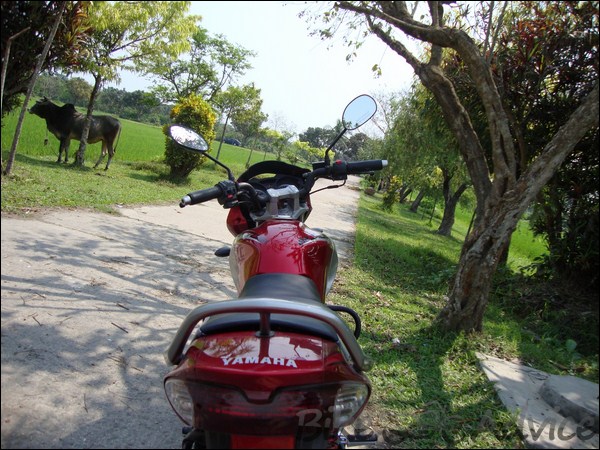 Discover 100cc: This is the bike with what I learnt biking. But i hated the look of it. And also it had bad reviews for morning starting which I heard from my friends. And It hadn’t enough power, had lousy acceleration and don’t know why It felt heavy to me all the time and driving panel looked like a toy.

Honda CBF Stunner 125cc: Well, say what I was impressed with this bike rather than the price of the bike. It had power, acceleration, and almost everything. But it was kicked out of my decision because of its sitting position and it was way out of budget for a 125cc bike.

Hero Honda Glamour 125cc: It looked nice but I saw say what about 100 of this model in the town so it was also out of my list.

Then I went to Yamaha Showroom. I saw Fazer, FZ-S, G5, Libero, and back of all Only one Gladiator. I felt in love with this bike at the first time I saw it. What a bike it was. It had meet all of my needs. Sitting position was awesome and all. So without saying everything I bought the bike. Seller said it was the only bike in Mymensingh that’s the another reason for buying it.

The service station was 0.7-0.8 KM away from store. I grabbed that and rushed to there. On my first ride to that I felt love embracing.

After completing all procedures, I was denoted following things for RUN-IN Period:

It can be described in one word: Mind-Blowing. While riding in city in traffic and also in rush all people keeps looking at the bike because of good look and under engine Racing cowl as Yamaha calls it. I was asked the price of bike several times while stuck in heavy traffic jam, People just can’t take away their eyes. 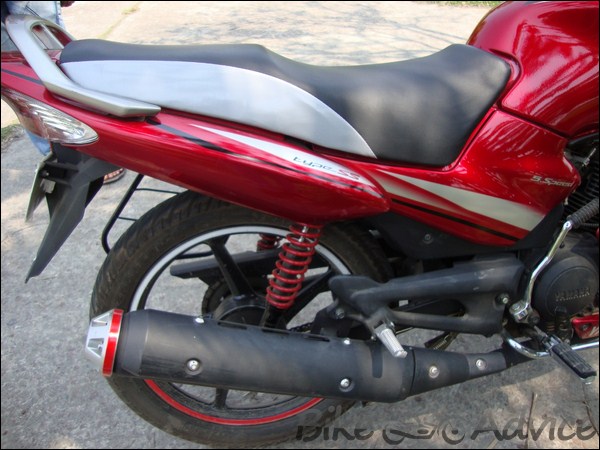 The head light does pretty good job with 12V 35/25W Halogen bulb. Tail – Light has an uniqueness like CBZ-Xtreme. Aerodynamic has sporty looks with dynamic sporty graphics. The aerodynamically designed three piece racing cowl which provides stylish & sporty look and a Racing Feel to the machine. And also the stylish muffler is awesome. I just love it. Rear Fender can be removed to make it look much sportier.

The analogue panel is a charm. It provides full details that anyone wants. Handle bar is another charm. Footrest is adjustable.

Here comes another charm with the engine that Yamaha provided with SS125. Engine seems ultra-refined to me. Even at 9K RPM engine seems very stable. As I am in Run-in period, I haven’t tried much out of it. It has a square engine and Yamaha Throttle Position Sensor (YTPS) in 123.7cc displacement which provides 11bhp according to Yamaha which helped me a lot in staying ahead in traffic over pulsars. I am too novice in biking so still have less idea about that torque thing. 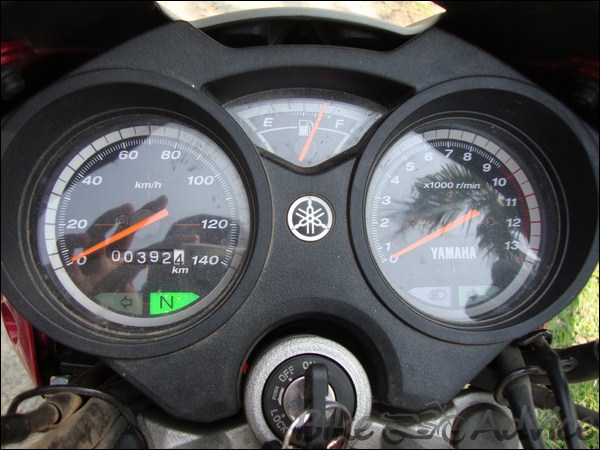 The main thing is that in cold condition, till now with auto choke, I didn’t have to kick more than once to get the engine started. That’s the most amazing part of the bike. Self-Start also works like a charm. Engine sound is barely heard. 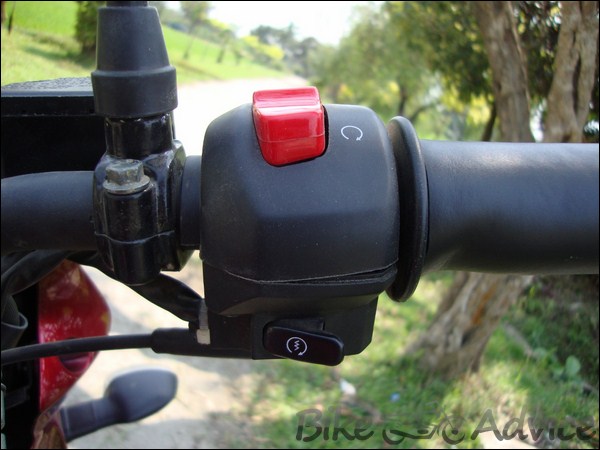 There is absolutely no vibration in engine at high RPM. Air filter does pretty much good work. And the engine gets warm rarely. Staying at one gear for long is observed as a reason to get it overheated.

Well, It has 1 down and 4 up gear system. Neutral is in the middle. At first, for 1-2 days it gave me pain. But after that it was butter smooth. The sound of changing gear can rarely be heard. 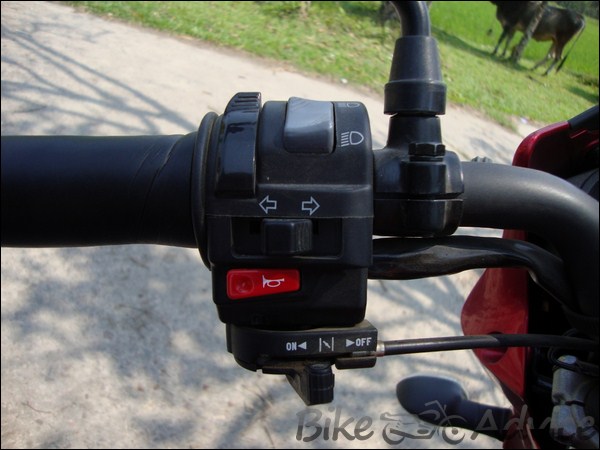 Till 2nd service, my bike is tuned to low speed thus lower gear ratio. For 1st gear it goes 15-18KM/H and at 2nd gear at 3500RPM it goes 29-32KM/H. But as the engine is new I change gears as soon RPM reaches to 3000RPM and Every day for once I try to use full gear and speed to make engine used to it without doing any harm.

Well, I am new to the bike system. I find this bike much more in control than discover 100cc with what I learnt biking but not as great as CBZ Xtreme. Going through corners is like a charm. Handling in traffic is much easier. 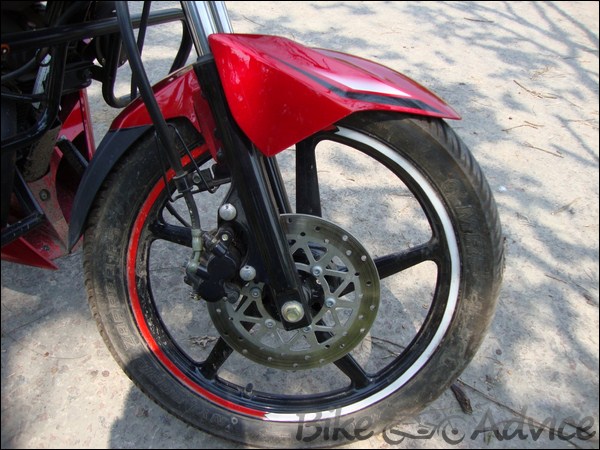 Braking system is like heaven. It has saved me twice till I have owned this bike. 240mm Front Disc Brake has adequate power to stop the bike from 45KM/H in just 2 seconds for under 3 meters approach. Rear 130mm drum brake is also a piece of art. Braking system is pretty good for a beginner like me.

To many people this attribute might seem important, but for me, it is nothing. A good engine will always consume much oil. That’s nothing to be worried of. So I wasn’t and ain’t worried of that issue right now. Usually I get 43KM/liter which is more than enough for me and after 1st servicing I will get 50KM/liter—said Service center engineer. So this is not much more concern for me.

This is surely a great bike for current generation like me as it has everything packed in bottle. Stunner 125cc may seem nice but it has got more raw power in it that can be unleashed through many occasions. Yamaha SS125 is a menace in 125cc segment.