After the previous successful seasons of the R15 One Make Race, Yamaha is back again to enthrall the racing enthusiasts with the Yamaha R15 One Make Race Championship – 2011 at the Madras Motor Race Track in Chennai. The racing event is part of the Indian National Racing Championship 2011 being organized by Madras Motor Sports Club (MMSC) and the Federation of Motor Sports Clubs of India (FMSCI). 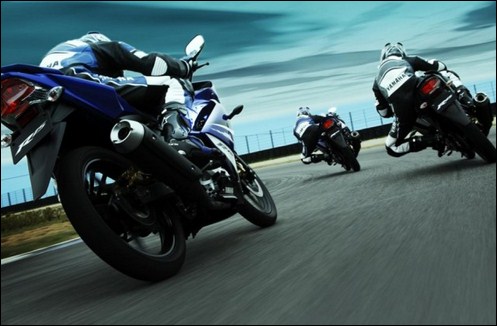 The 5 round championship kick starts from 4th June, 2011 and will conclude on 2nd October, 2011. Each round will have separate races for Novice & Expert categories. The races will be held at Madras Motor Race Track, Chennai and the Kari Motor Speedway, Coimbatore.

Like the previous years, this year too, the event will be open to all Yamaha as well as non-Yamaha customers thereby offering them an opportunity to stir their racing instincts on Yamaha’s flagship model – the YZF-R15. Participants are sure to have a thrilling experience as the competition bikes would be modified with Daytona Racing Kit. These kits are developed using valuable experience gained from MotoGP & World Superbike racing and are designed exclusively for racing purposes in a closed circuit.  (Oh wow! That’s even more amazing)

Commenting on the occasion, Mr. Hiroyuki Suzuki, CEO & MD, India Yamaha Motor said, “Motor Sports is an integral part of our Brand Image. It has always been Yamaha’s endeavor to promote motor sports along with safe biking. There are thousands of our customers who want to participate in these events for the love of the sport & thrill. This also gives us the opportunity to come closer to our consumers as they get to experience the true racing instinct of YZF-R15. The event has seen huge participation in its previous editions and we surely hope to witness the same this year.”

All the riders participating in Yamaha R15 One Make Race Championship will be evaluated on the basis of their performance. The 3 best performing riders may be given a chance to participate in the “YAMAHA ASEAN CUP RACE” in Thailand later in 2011. This event is considered to be the stepping stone for all beginners who would want to make racing as their career.

The technology in YZF-R15 has percolated from Yamaha’s best sportsbike – The R1 (Delta box frame/ Fuel Injection/ 6 speed gearbox/ styling/ Liquid Cooled 4V engine). Just like R1, it is light weight, has power-on-demand, besides having centralized mass, stopping power, aerodynamics, ergonomics and stability/ rigidity, among others. It also has the controllability and maneuverability to maximize riding/ cornering/ braking performance.

Yamaha’s corporate culture has always given special importance to bike racing in India. It is a way of expressing the ‘spirit of challenge’ that Yamaha values highly.  Through the R15 Championship which is one of the biggest and one among the best initiatives by Yamaha, the company aspires to take racing culture to scale new heights in India. Yamaha plans to continue this championship as a valuable step for carrying forward the racing legacy in the country.

For all those who are participating, BikeAdvice wishes you a Happy Racing!