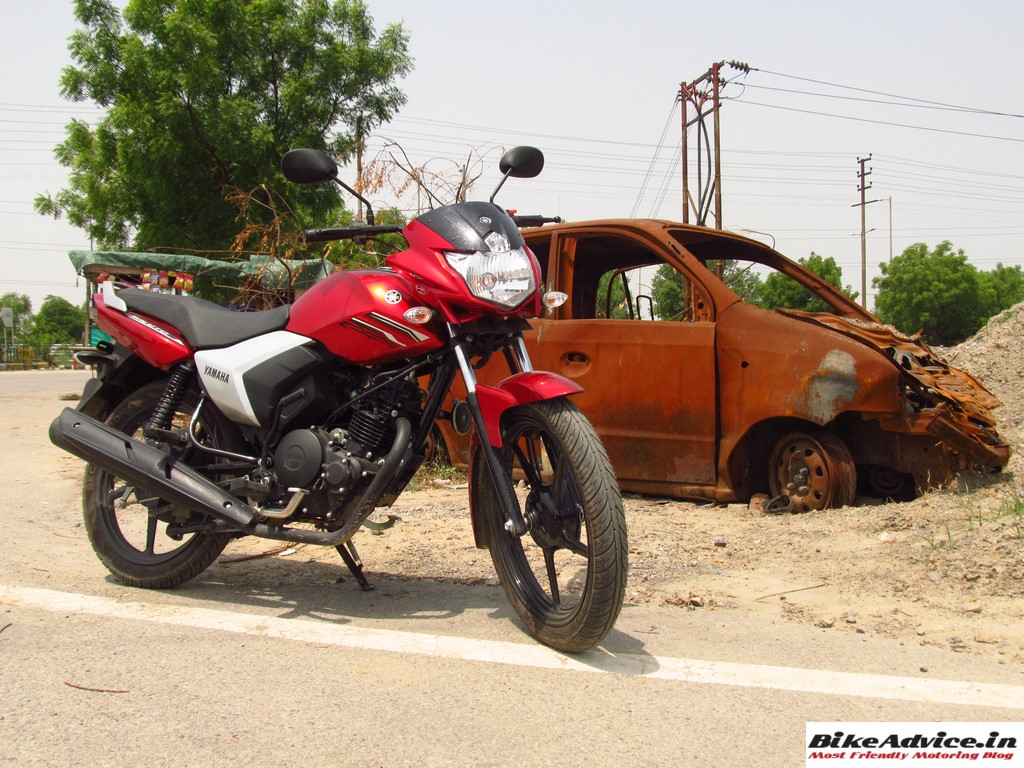 The whole point of the evolution of 100cc motorcycles to the 125 cc segment was to create a balance between power and fuel efficiency. Like all manufacturers, Yamaha too made their entry into the segment and made up a name with the Gladiator and SS125 (talking about recent four stroke bikes, otherwise YBX and Enticer are still our all time favorites!). With its energies concentrated on the bigger bikes (since they get them the maximum sales), Yamaha has yet again thought of trying a hand in the commuter segment and hence, the Saluto was born to take on the segment’s best seller the Honda Shine. Our tester Neelanjan took the bike for a spin in Delhi’s traffic and here are his findings…

The pretty looking bike, unlike the SS125, is aimed to be a family oriented commuter and not an enthusiast’s puppy. It interestingly now becomes the only 125 cc motorcycle to be sold by Yamaha. Yes, the rest of the drab-sellers are no more… So, let us get down to business and talk about the latest offering… 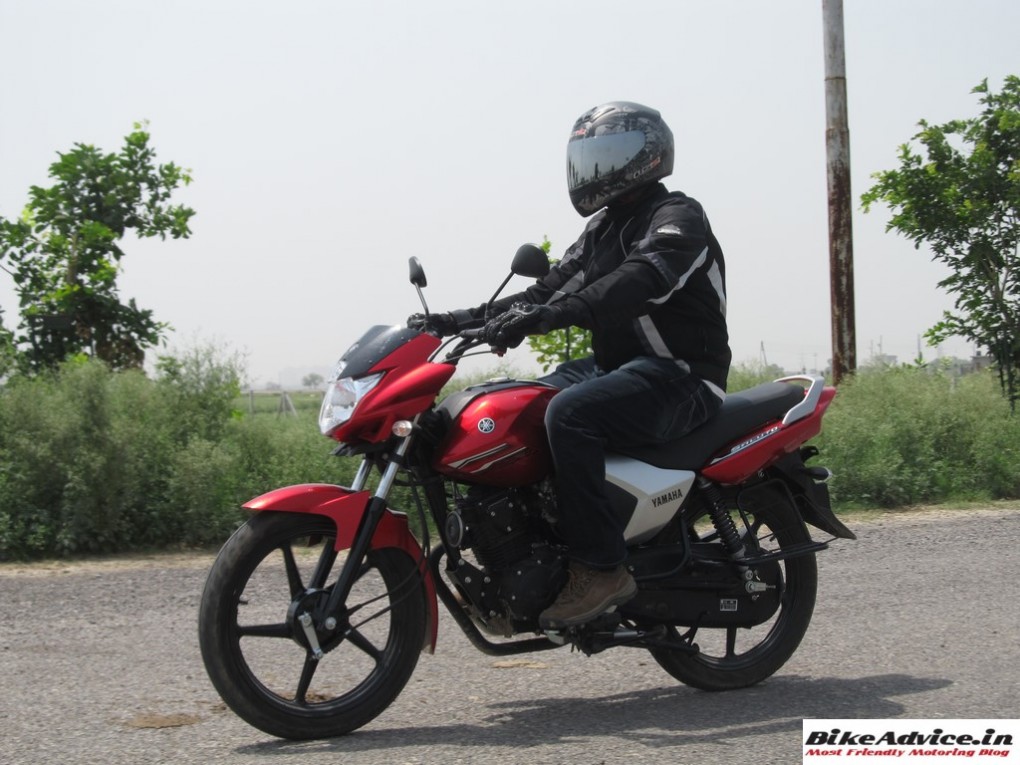 Saluto looks a typical Yamaha commuter, decently good! The minimal use of graphics (which we always love) remind you of the first generation FZs. The neatly designed fuel tank gets an equally neat plastic ending with catchy stickers on the side. In fact I would even take the liberty of calling the tank muscular by the overall standard of the segment. 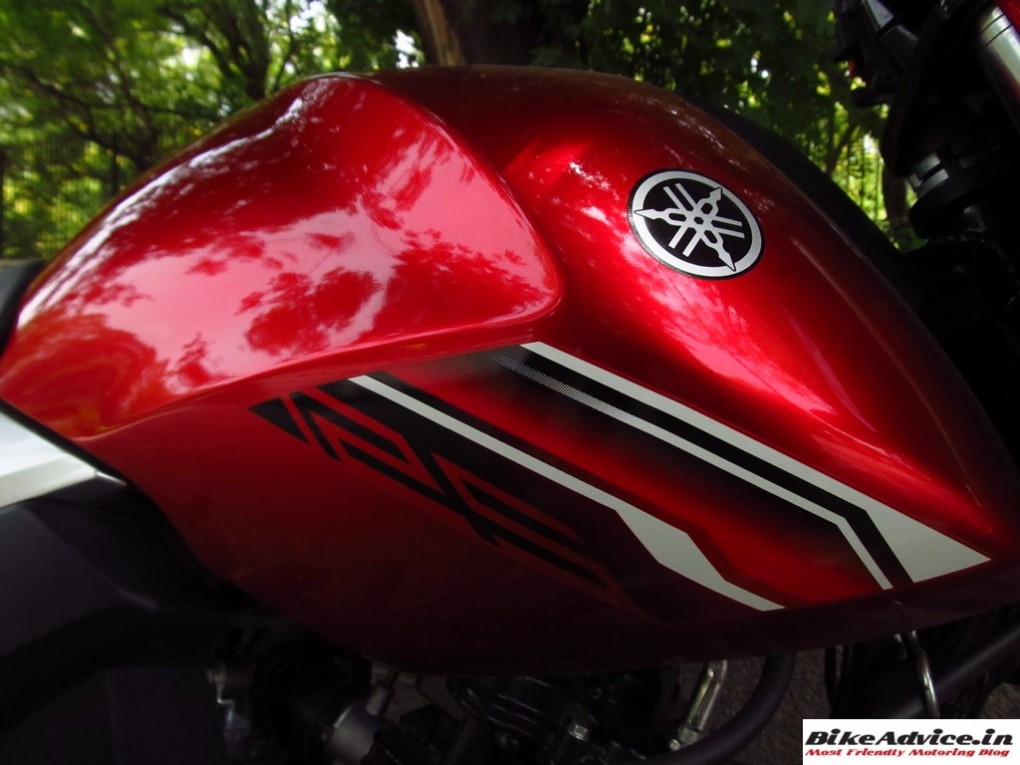 The pointed tail gets a large highly visible tail lamp which is mated well with the grey coloured grab rail. The head lamp console now confirms that Yamaha has finally and officially moved over the housefly-like shit eyes of the long-gone Fazer 125 and there will not be anything remotely close to that! It also sports daytime running pilot lights. 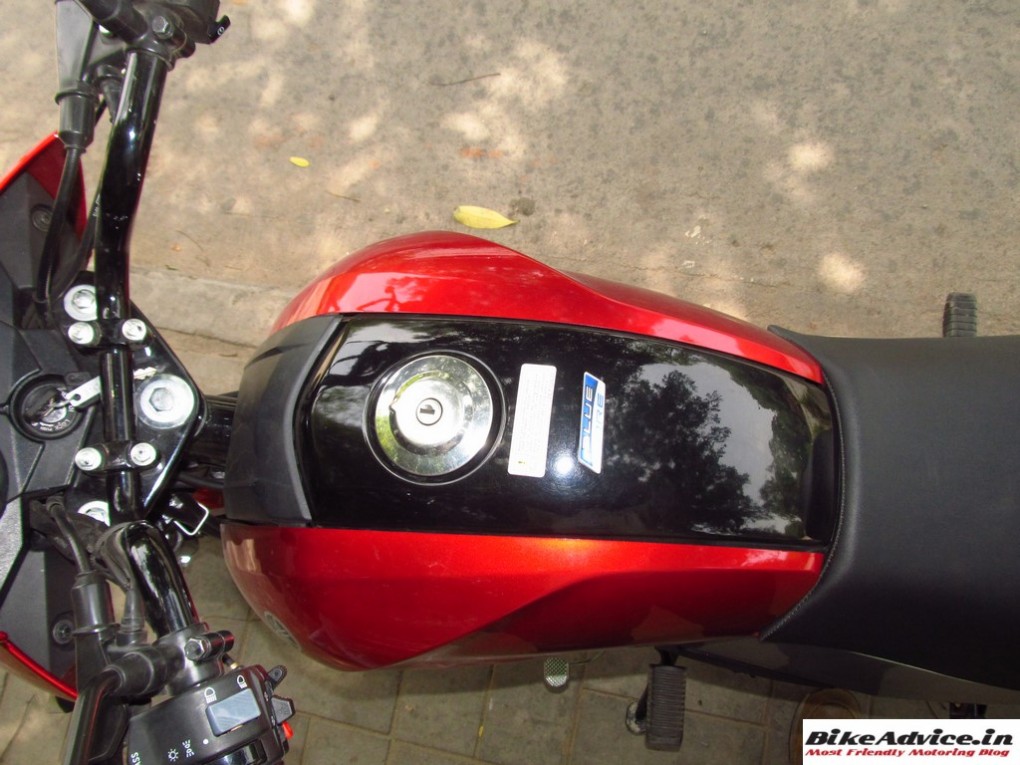 The fuel tank lid is the traditional unit – completely detachable! And it is a little difficult to re-attach initially but again, as the gear lever, nothing which you cannot get used to. The wheels are made of shiny black alloys (why not matte?) and the overall black theme gets carried over to the engine, exhaust muffler and suspension spring. 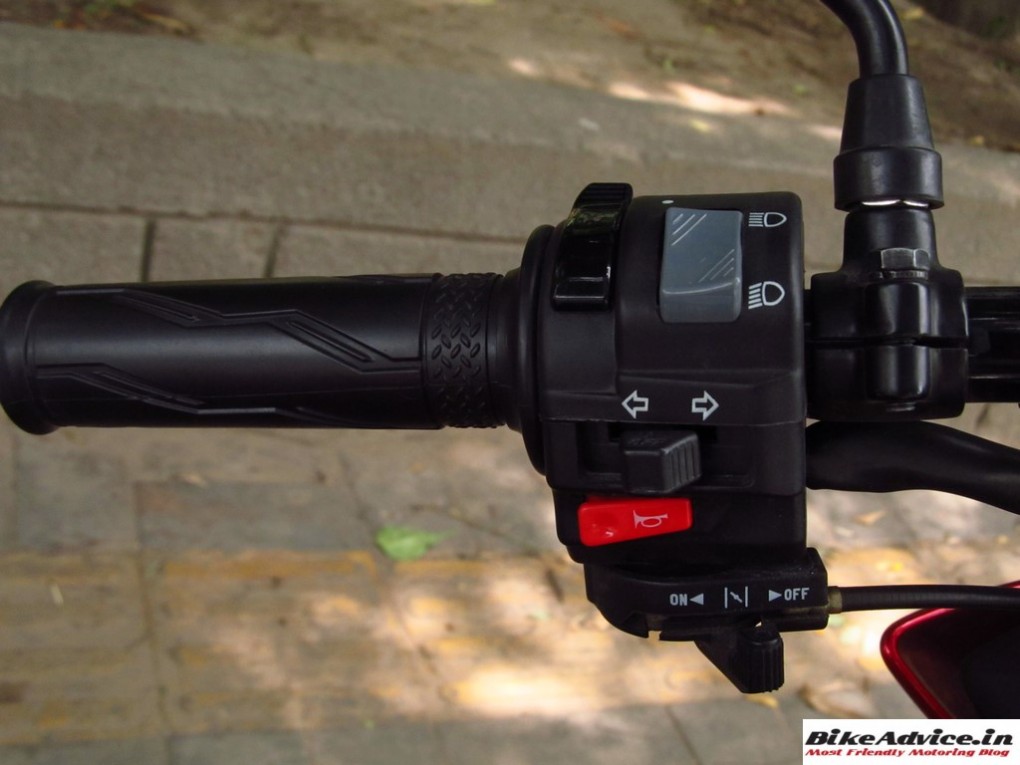 The switch gear is made of decent quality plastics and the overall finish is what you are generally used to see in this segment. I faced a couple of problems with the horn button – One, it is tiny in size and two, it is not placed very conveniently. You will have a tough time finding it when you are wearing your riding gloves! And then there is no engine kill switch! 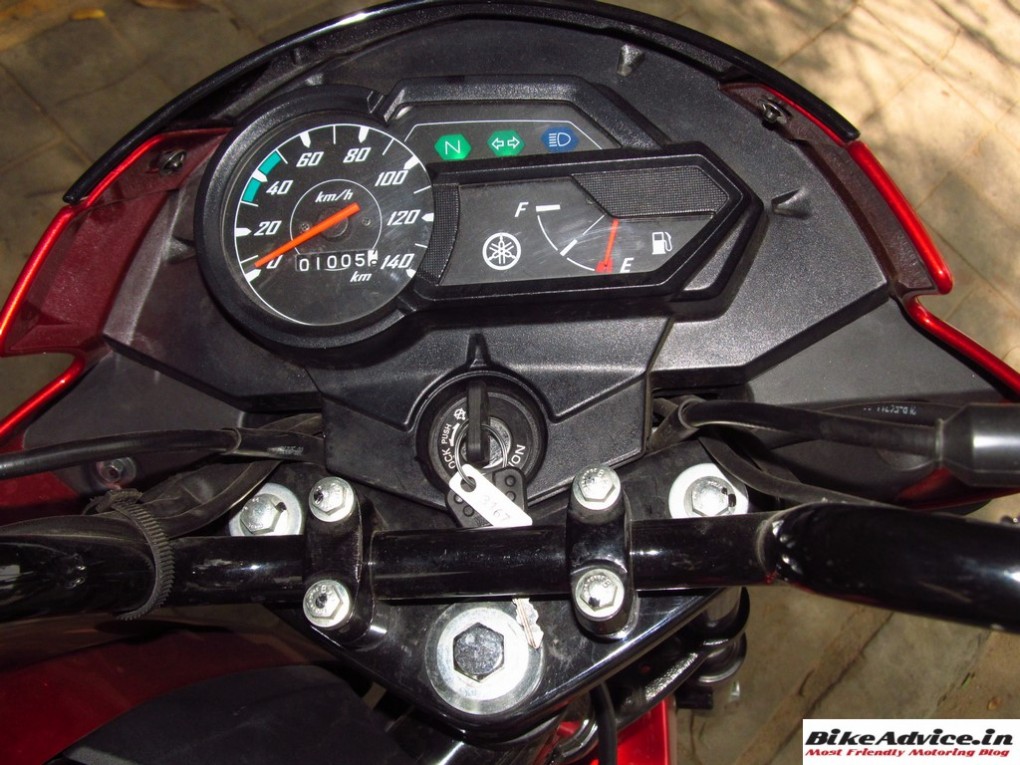 The instrumentation console is neatly arranged and is completely analogue. It gets the basic speedo, odometer, fuel gauge and lights for neutral, indicators and high beam. 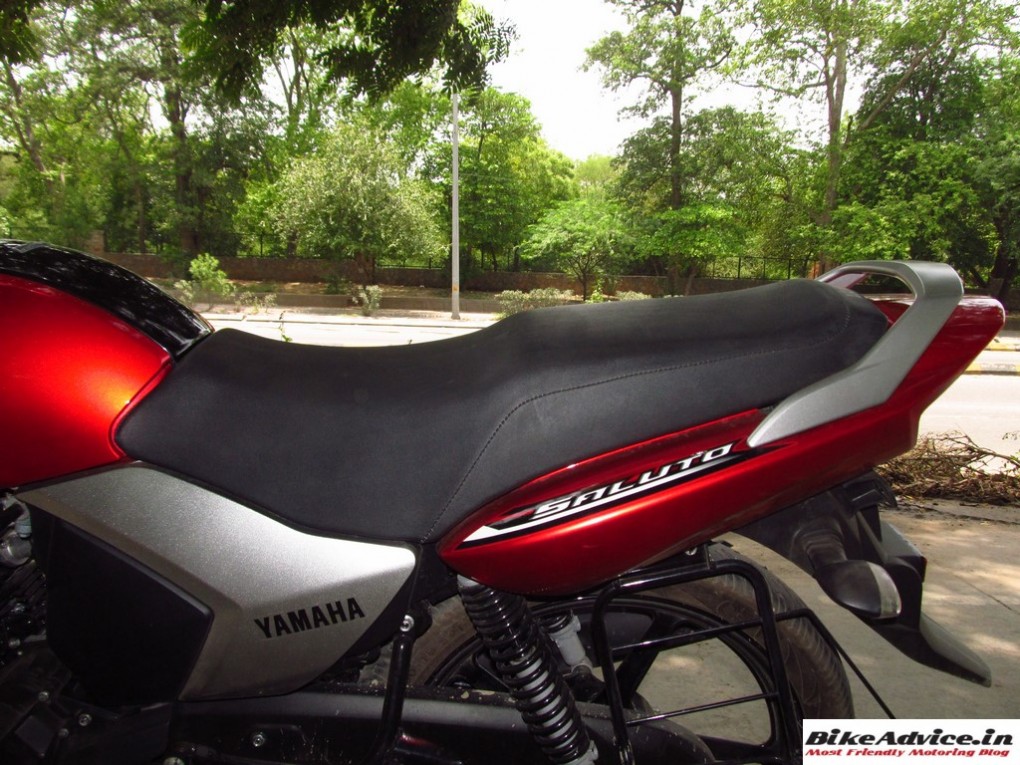 The seat is a very comfortable single unit and rides on the commuter are stress free – small city rides or slightly longer highway hauls both. Even on the pillion seat, I felt very relaxed after a long early morning ride on a hot lazy Sunday for the shoot, the only time I was not the rider! 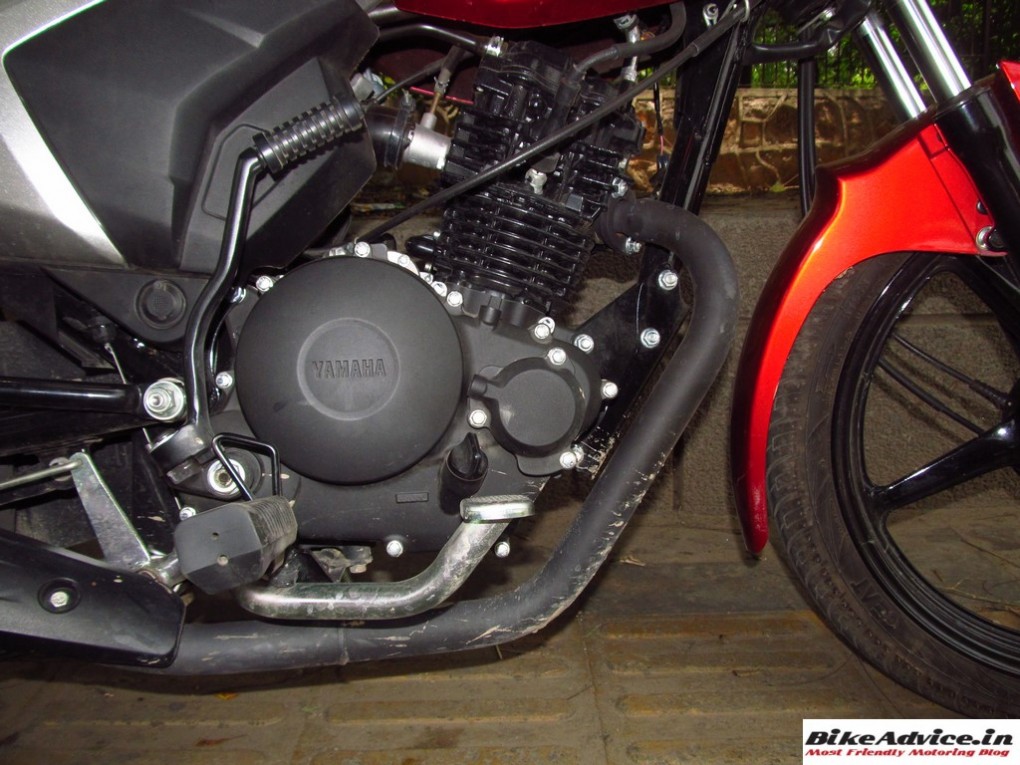 On paper Saluto might not tick your instinct. To begin with its maximum power output of only 8.3 PS at 7,000 rpm does seem to be one of the lowest in the segment. However the low end grunt thanks to the initial torque delivery is pretty impressive for a motorcycle of this size.. 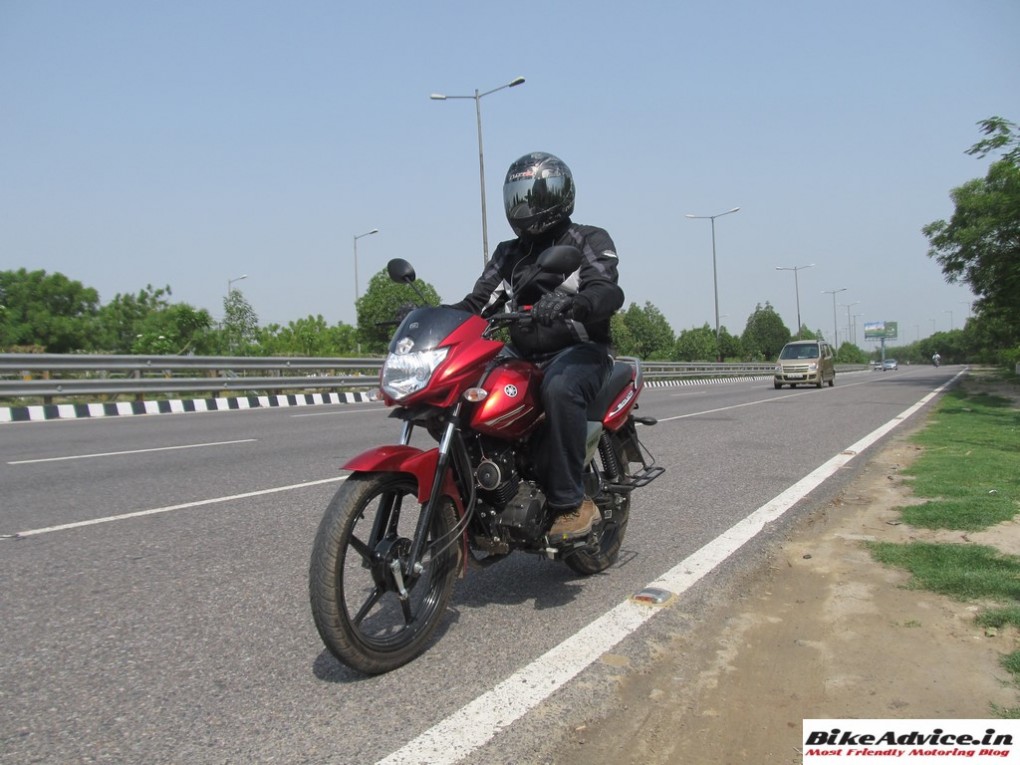 What surprised me even more is that Saluto has enough grunt to record a speed of 110 kmph on the speedo (when our trusted GPS pointed it to be 95 kmph). Now that’s not bad at all for a bike of this category! Yamaha claims that Saluto’s engine is based on the mill of the new FZ launched last year. Segment-lightest weight of only 112 kg also helps here and Yamaha informs that the combustion chamber of this new mill is more compact than the earlier 125 ccs from Yamaha. 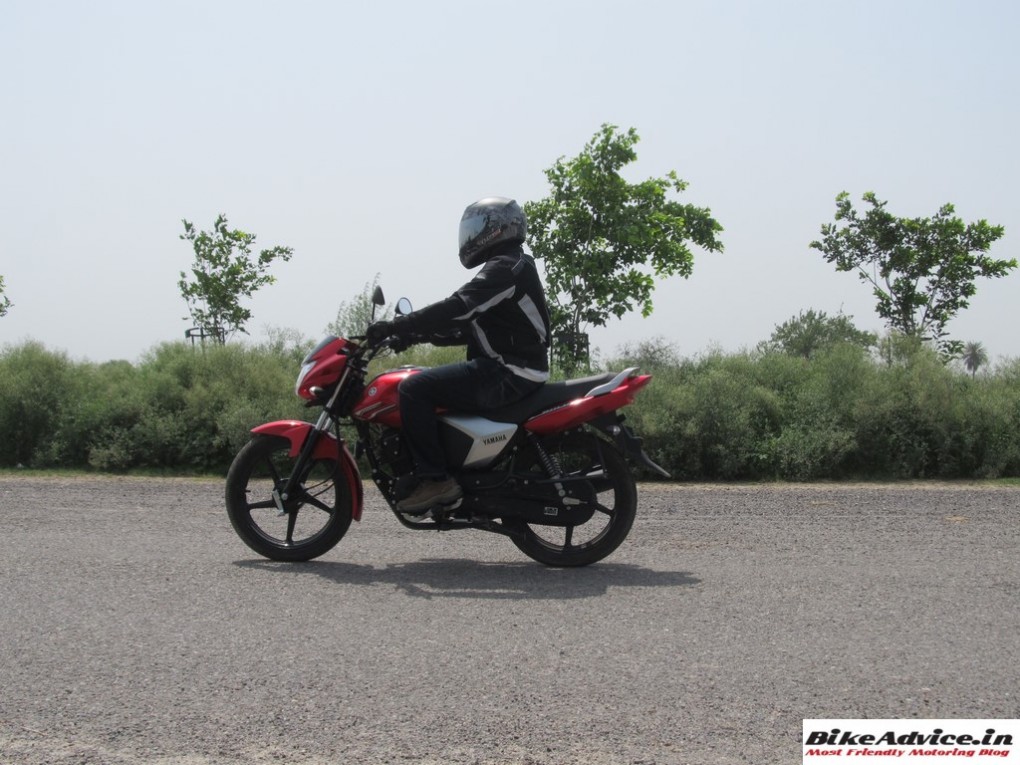 Here is a quick chart to share the approximate top speeds we achieved in every gear.

Quite clearly, the fourth gear is an overdrive and given a long stretch adds up as many as 40 cumulative units in the overall speeds achieved for every gear. 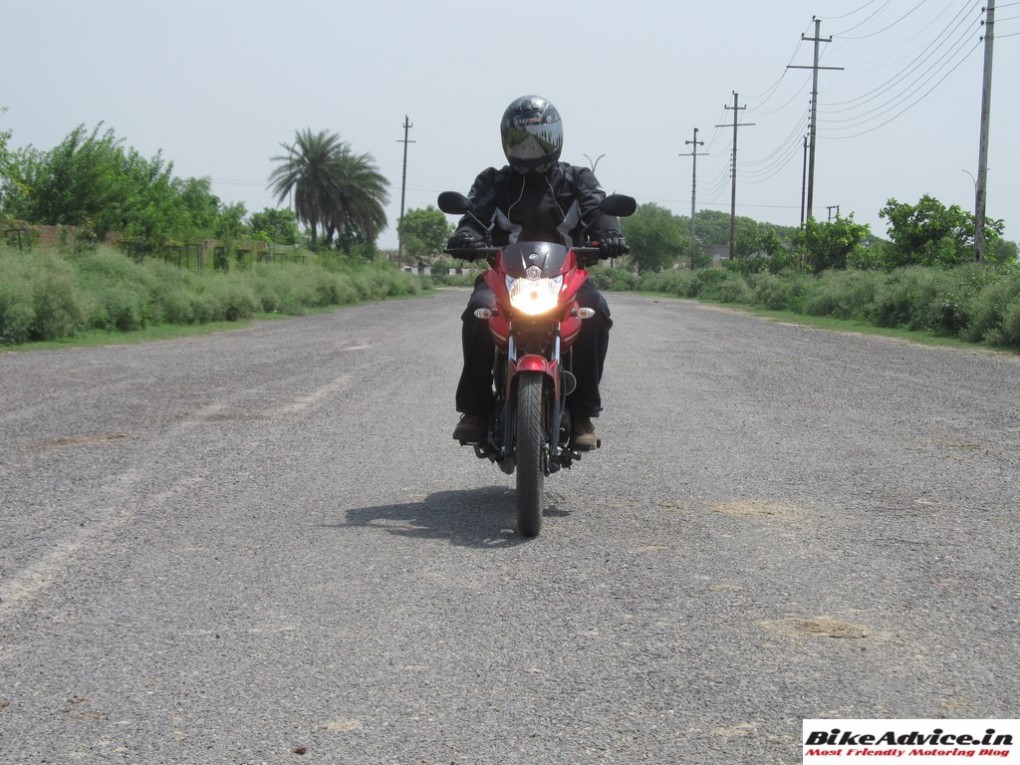 Even though Saluto has been tuned for fuel efficiency it is pretty nimble in city traffic. The max torque of 10.1 Nm peaks in earlier at 4500 and the overall band is concentrated in the lower to mid rpms. In fact, despite being low on power, you will find sprint times on the Saluto almost similar to the other commuter 125 ccs. In terms of refinement, Saluto’s new motor is a wee bit more refined than Shine. 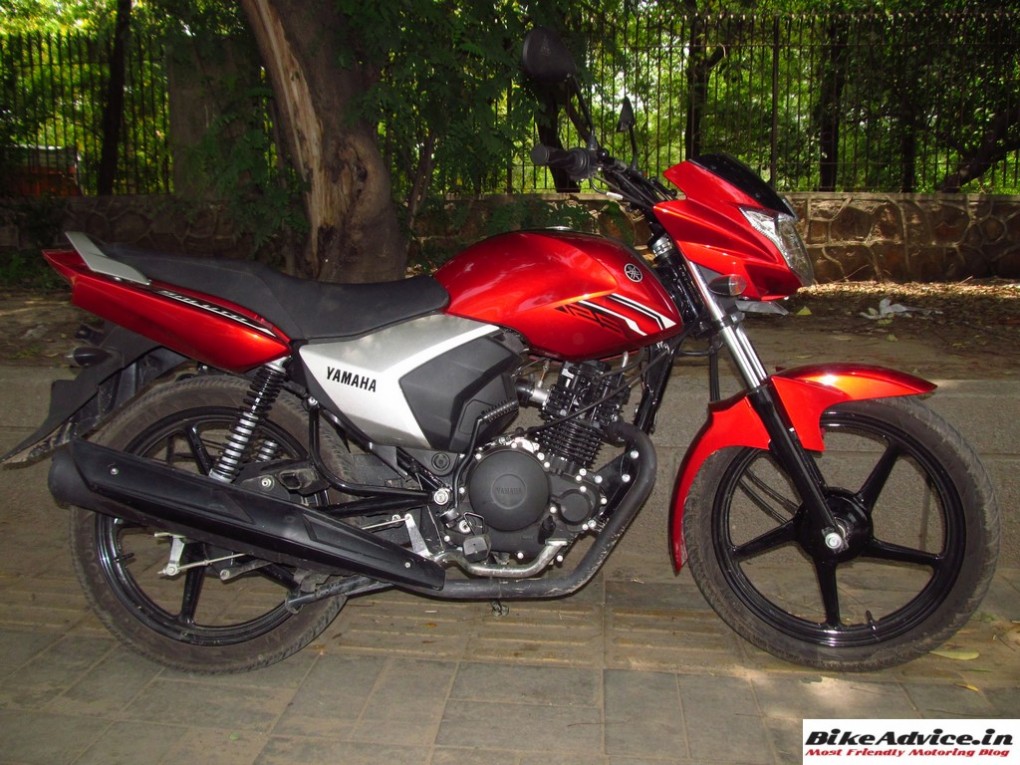 Vibrations have been well controlled, however, they creep in when you are pushing the bike flat out at mid-high to high rpms. But don’t you worry for all your regular riding gestures, there won’t be any issues. 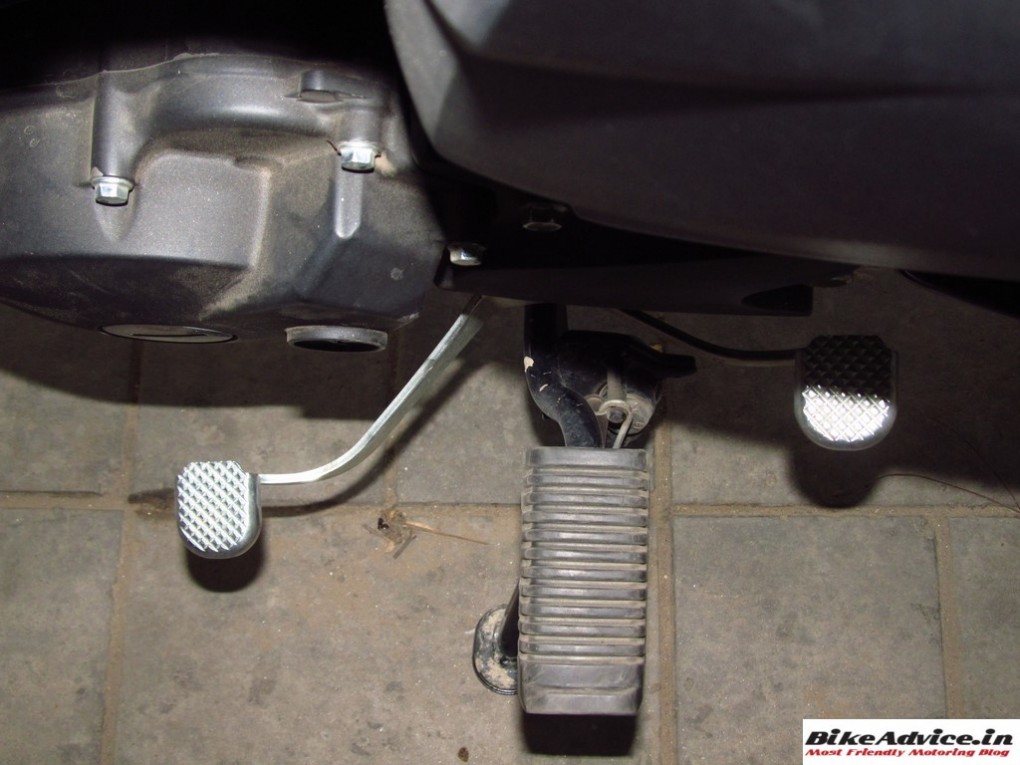 The gear lever is commuter centric heal and toe shifter and the overall feedback from the gearbox is positive. I did not encounter any false neutral in my test. 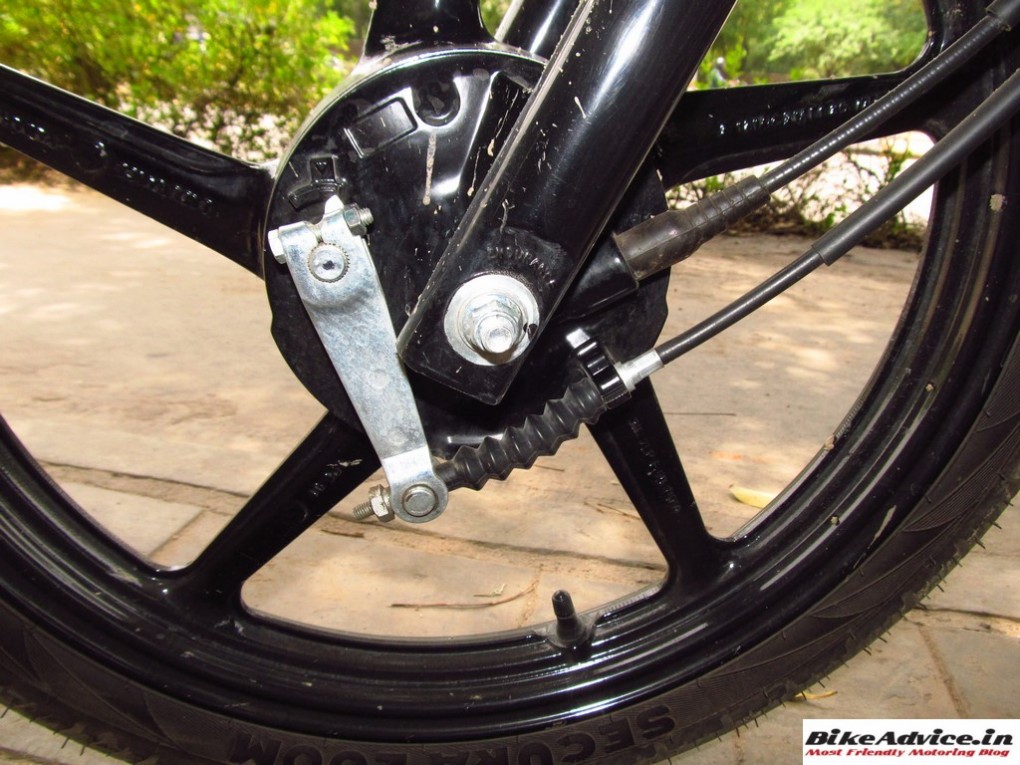 If you think that this bike is just another commuter you are obviously not wrong and it is intended to be one. It is no rocket and does its job of providing a fairly decent commute from point A to B. The stock tubeless tyres Ceat Secura Zoom+ are strictly okay in terms of overall grip. High speed manners are pretty good and the light-weight chassis helps build confidence.

My test machine provided by Yamaha was the all drum-brake version and the brakes were pathetic! Drum brake set up just does not do justice to the bike and frankly I was uncomfortable. But the good thing is that, Yamaha has now launched a disc brake version of Saluto which comes with a front disc brake.

Stock suspension setup is firm and the overall ride quality of offer is pretty decent. The bike absorbs most of the bumps except the really nasty ones. Despite the lighter weight, the motorcycle doesn’t compromise on high speed stability. 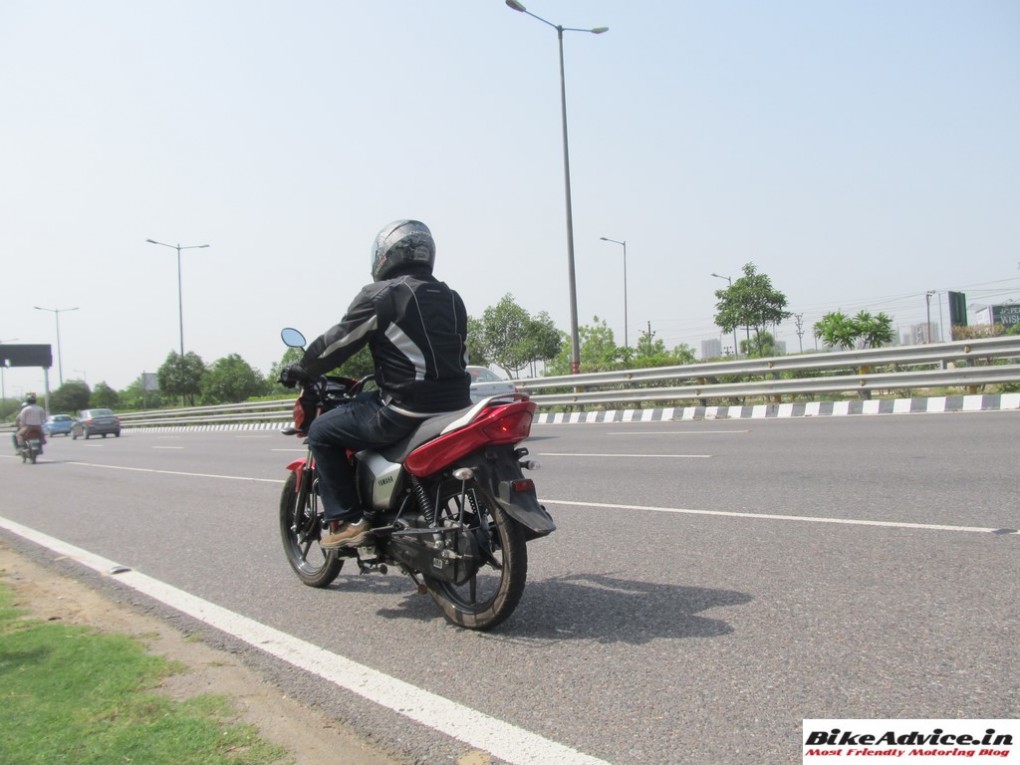 Now a question which I know you all want to know. ‘Kitna deti hai’. The company claims a fuel efficiency of 78 kmpl ARAI certified. In our tests, this red Saluto returned an overall fuel economy of 61.4 kmpl. That’s with a mix of city as well as highway rides with a very generous hand on the throttle. Not ground breaking figures these, but our test bike had done less than 1,000 km on the odo and I believe this will go up a few points when the engine opens up. 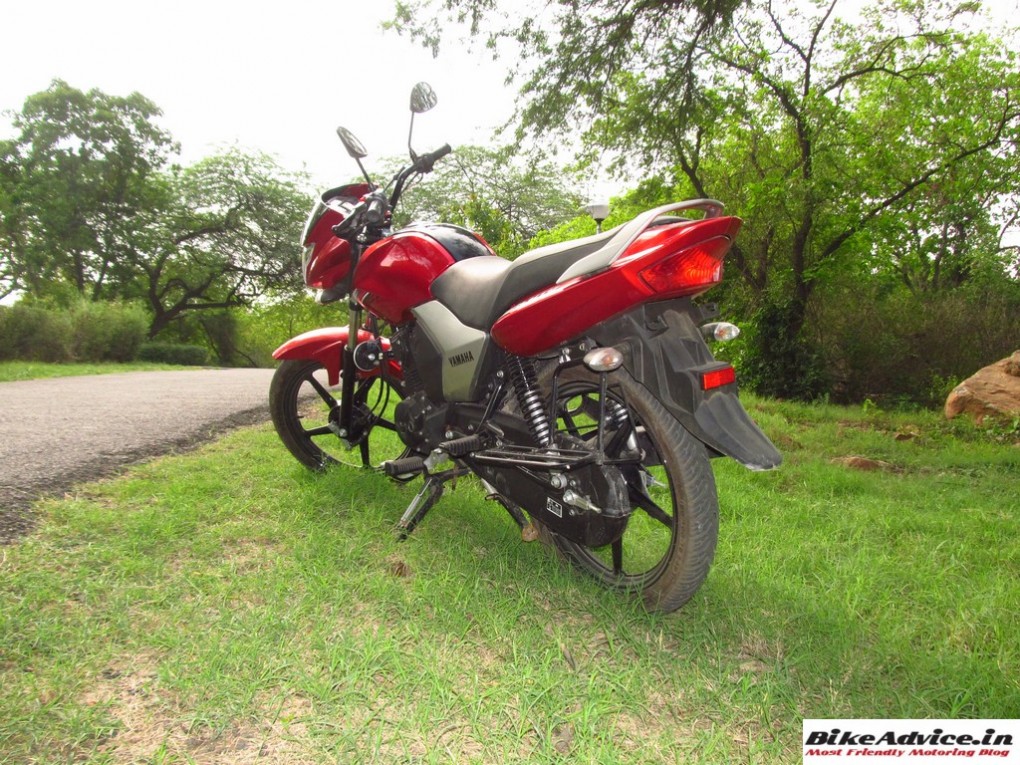 If you feel Saluto is not a very exciting product, you need to tell me which one in this segment is? It is intended to be reliable family commuter which can be an everyday mule and ride without any fuss. The more premium disc brake version (Rs 54,500) also gets better looks (read color combos) and despite being priced at a premium of Rs 2500 from the standard variant (Rs 52,000), it is cheaper than Shine (Rs 58,376) by about Rs 4000 on the ex-showroom Delhi price. Makes a bargain…? 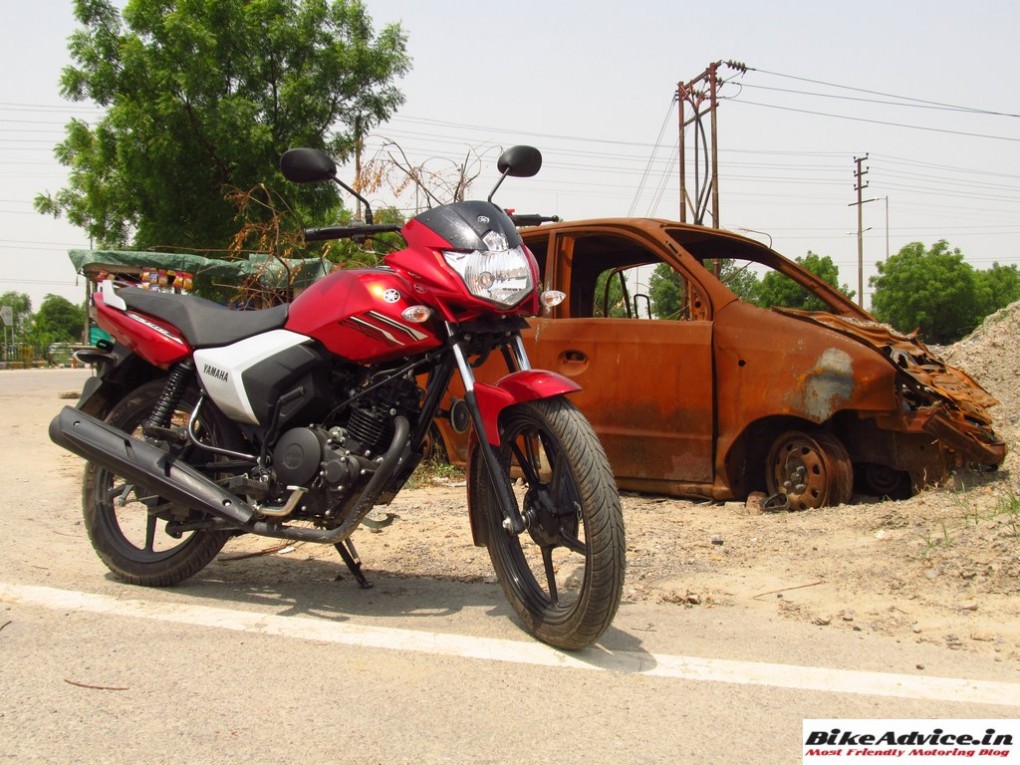 On the product front it is a fairly capable commuter, is easy to manoeuvre and comes with a pretty decent fuel efficiency. While it does not have the flamboyance of the SS 125, it boasts of a calming sensation of a new age Yamaha.

Next: Go to our Official Bike Reviews Page