Hey All, I am Clayton D’souza and I am here to share my RD experience with all you bikers. It’s been 3 amazing years since I took possession, or rather have been possessed by the Yamaha RD350. Passion has few takers, right? We’ve heard about, seen some people who owned RDs. 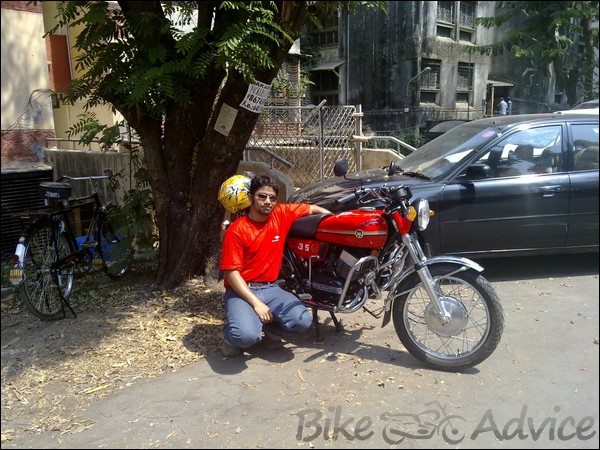 The RD family is otherwise called as Racing Death which probably is just a myth. It stands for Yamaha Race Derived 2 stroke Road. The RD Family consists of the 50, 90*, 125,200,250,350,400 and 500, not forgetting the amazing TZ’s, all Amazing machines in their own right. Anyone who hasn’t owned or at least had a good ride on a RD has missed out on an adrenaline filled, thrilling experience!

The first RD I’d seen was an LC owned by My Mum’s boss. This one was stationary, but loved. Usually you don’t quite see RD’s, just the most amazing Vroooom emanates from afar and by the time you crane your neck, it’s gone way past you and you’re allowed only a fleeting glimpse of some machine fast forwarding ahead. 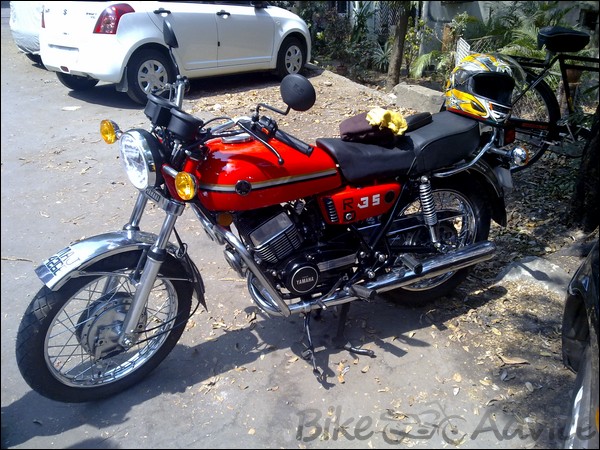 Fast forward many years and I was hanging out with a friend who owns an RD, were getting it tuned up at Sion, when I had a Christine experience. If you’ve seen the Stephen King’s Novel inspired film you’ll know how Christine(the Plymouth or Cadillac tailfin Car), was alive in the movie, the owner being completely obsessed and possessed by the vehicle. I felt like his RD was “Calling” Me, saying, get on, one ride- hold tight and you’ll be My slave forever.

You have to get obsessed with the idea of owning an RD before owning one. As for Myself, I googled like a psychopath, a stalker, who wanted to get more and more information on this target, unable to satiate my hunger, all this info and no time to learn. Damn!

When I knew I was finally ready and “worthy”, I started My search for a Yamaha RD350. I spread the word like a Messenger of God. I asked anyone and everyone for any info on the Holy Beast. I checked out, in all, as I remember,6 RD’s but none of them called out to Me, though I was able to ride just one, my first ride aboard an RD at Sion, July 12th 2007 around 4pm. 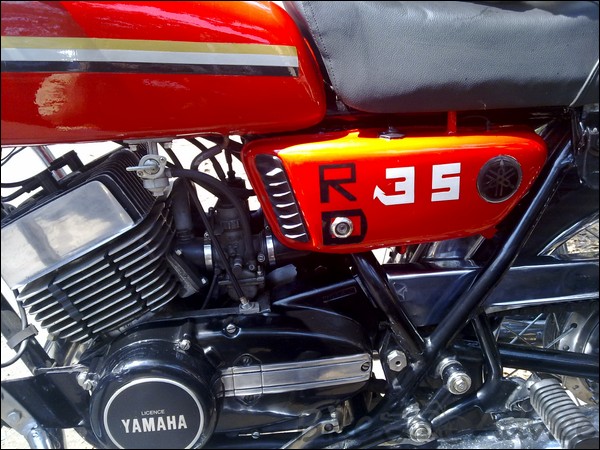 Asking prices for 3 were way too steep than I could afford, one was a goner, and the other had protons and an arsehole for an owner.

Anyway, I got a number from a friend’s acquaintance, (Networking helps) He gave me a number and I reached Chembur to meet Yogesh, the co-owner!. After much coaxing, she (RD) started, took off for a small ride, half scared of the reputation she had and it made me feel like I am home.

It didn’t take much to convince me, I was sold long before this. I had all the ownership documents readied and done in 2 months.I was now the proud owner of “Intoxica”, named RD 350.Every ride is memorable but different. This Motorcycle has feelings, an aura so powerful that you have to ride it to believe and feel the same. Make no mistake, it demands attention and commands respect of everyone around.

You just couldn’t resist the amazing sound this beast makes while moving. .According to me, RD has the most beautiful vroom made by an engine. Well, I haven’t heard many, but still, the only sound better than an exhaust of an RD is the sound of an RD or many RD’s whizzing by through a tunnel, it’s indescribable, really. 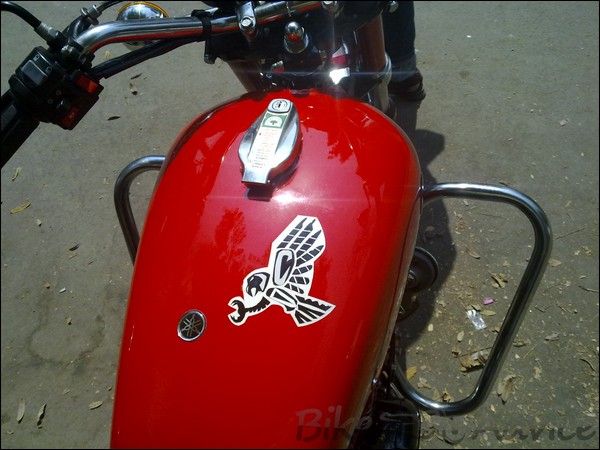 Most Indians want fuel efficiency over power while choosing a motorcycle, or prefer a package of both which is not possible for performance machines, which is why the Motorcycle companies tease us motorcycle lovers, every single time, especially Bajaj, with their adding 30cc to every category on the list, I would love sue them for mental harassment. They started this shit, but the “consumers” too are to blame. Moving on… 🙂

The Question, most RD owners will have answered many a time or would’ve gotten pissed off with is; Boss, Mileage kitna hai? And you have Me here, frowning and telling them; You know what? I’ve never really thought about it, until now. You misers .Err…Sorry, I was in the zone. I’ve met many a penny pinchers, you see. 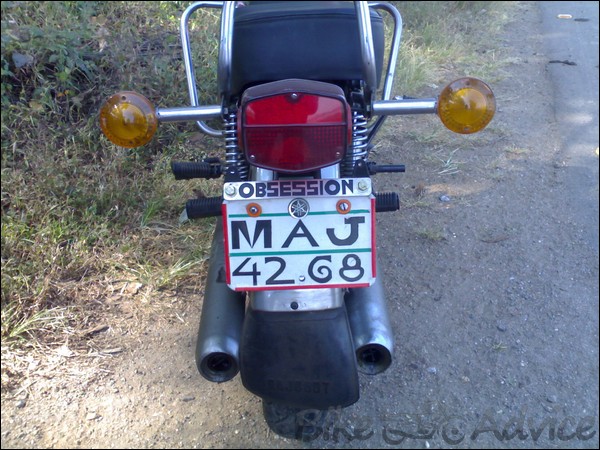 I checked the mileage on mine, just once out of curiosity and it gave me an amazing average of 22kmpl, with both conservative and speedy styles of riding.

What about the Green Peace Blokes, I’m making a hole in the precious Ozone layer, am I? Neighbors complaining she’s noisy? Tell them to “Bugger off!” Mind you, I walk outside the gate, start my Yamaha RD and wait for 3 minutes, heat her up and try to leave as quietly as possible. It’s been 16 years since they were last manufactured, but you still find a lot of people interested in buying a second hand RD, and giving it for a restoration of sorts. The RD is an obsession, you (the owners) are fortunate enough to be owning and riding a magnificent cult machine.

To possess an RD, you have to be extremely passionate about it, you have to learn a little bit about it first, granted I didn’t at the time, but I’m learning now. You’ve got to have some greens on you or the bills will add up making you rue the day you bought it, we wouldn’t want that kind of thought process, do we? So be prepared for insanely high billing, should be able to spend freely on the Yamaha RD without thinking of the returns. 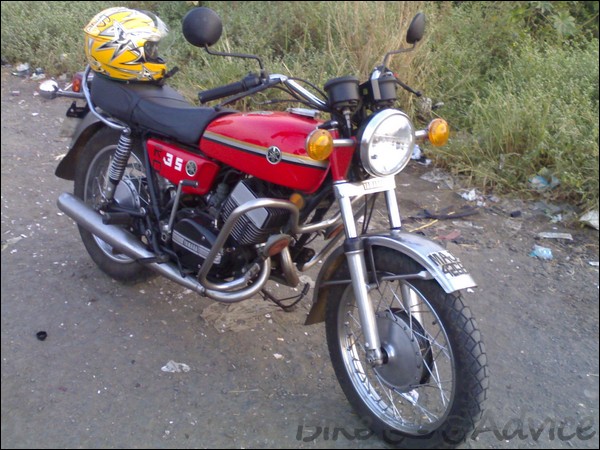 Not meant to be kept in the garage like you keep a doll in a showcase. The RD was meant to be ridden hard to the limit of its power band, planting a devilish smile on the owner’s face every single ride mile after mile. Take good care of her, and She will reciprocate well with every ride, that’s a promise. Although there will be frustrating times with her but that’s all part of the ownership experience, which is something else only!.

I’ve walked with My RD twice now, took me 3 hours from Malad to Andheri(S.V Road),was leaving from work at 5am when suddenly a minute away from the work building she sputters and stops, the fuse had blown, if I had the sense to check it, touching both ends of the wires would start it and wouldn’t have given me sore thigh muscles and a body ache the next day.

Second walk was from Andheri to Dadar (Mechanic), which was planned! Reason being my bike’s coils were giving trouble and My mechanic, being part arsehole and part god for me, kept on delaying his visit. So I went to him, with the bike!

You’ll have friends, girlfriends, neighbors and parents complaining about her but ignore them all, cause she’s paramount.

What about passing it down the line to your kids, can just imagine that wonderful amazing moment, happy but dying inside as well, maybe tears streaming down your face even making sure she’ll be well looked after, parting ways but still keeping it within confines of your family; but only after you’re sure you’ve gotten rid of the possessiveness factor, which is highly impossible. 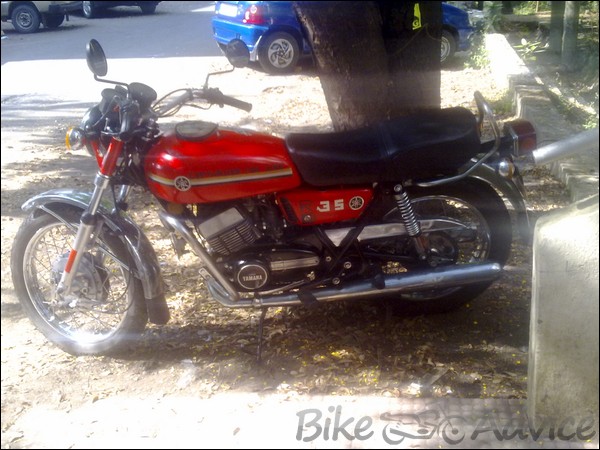 Compared to ‘other’ RD owners I ride My RD350 every single day, there are very few of us who ride every day. I have no second weekday bike nor do I keep the RD 350 for weekends only, what’s the goddamn point?(no pun intended).Currently without a job makes it difficult to ride, also now I have to replace my points as they’ve been consumed, and I have no money!.

I’m an Atheist, but when I board the RD, I’m a Believer.

I’m not into sniffing but I do love the sweet smell of a 2 stroke motorcycle, petrol, 2T oil, paint, thinner and acetone. I already possess the 350AC Or wait, I do think it has possessed me. Well, all the same I would not like being exorcised! As for my own 2 stroke list, if found, I will be picking up the 125AC, 250LC, 350 LC and 500(not sure anyone would part with this one), also a Kawasaki Triple 500 would do me a whole world of good, when time and money permit.

The RD is more important to me that anyone can ever imagine! Very few people will understand that emotion. Even very few Yamaha RD owners would go the extent I can go through for it, its something else. This amazing more Human than machine to me revived my Life when I was down and very close to out. This mean machine has acted as Single motivating factor in my existence. 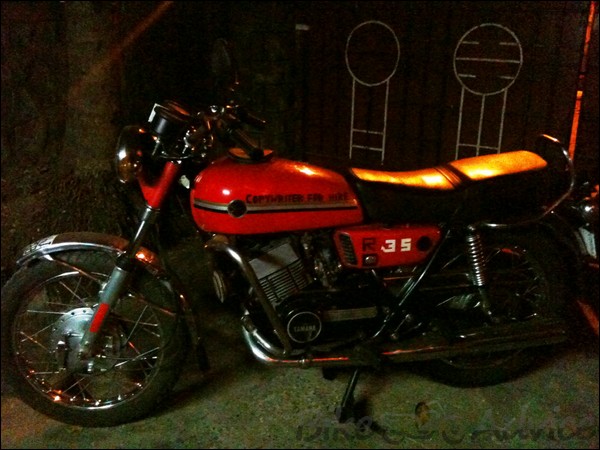 I’m sure that I’d sell myself for its sustenance. You see, for me, she’s a living being. Has given me joys that I never knew existed. She already possesses my very Soul. I have nothing left. So, there she lies still calling My Name and waiting for the next ride. It is truly a 2 Stroke Maniac and will forever remain.