In the world of sports bike, Yamaha R6 dominates the segment with its 600 cc engine. The R6 model was first launched in the market by the Japanese giant Yamaha in the year 1999 and later on in the subsequent years Yamaha R6 models have undergone modifications. However, Yamaha R6 Motorcycle should be taken as a series and every year Yamaha launches one variant of R6 motorcycle. 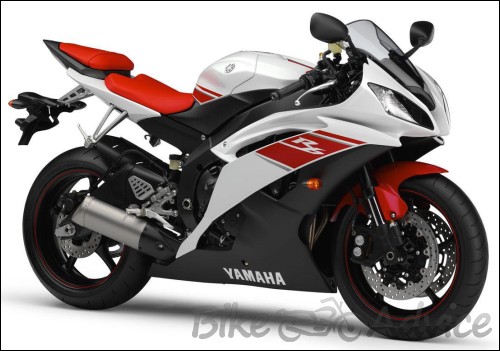 In general, it is presumed by bikers across the world that Yamaha R6 models are nothing but dream bikes for most sportsmen and privileged bike lovers. The first Yamaha R6 sports bike was made to generate a power of 120hp and a dry weight of 169kgs. This racing bike at that time was available in sporty blue and red colors. Several refinements led to the newer versions in 2001, 2003, 2006 and finally 2008 which has the most recent R6 motorcycle.

In the Yamaha R6 models of the year 2001, the weight of the bike was reduced by 2 kilos, and there was enhancement in the tail section styling and also possibility for greater under seat storage. After this, there was improvement of Yamaha R6 models in terms of a totally new chassis. There had been improvement with respect to engine as well with fuel injection system, and weight had gotten further reduced to 162 kgs and headlight was available with new styling. Mistral Grey, another color option got added with Yamaha R6 models along with these improvements. The front suspension of Yamaha R6 models also underwent transformation from telescopic fork to adjustable inverted fork for better performance.

Yamaha senior officials are of the opinion that there is no end to development so improvements will continue with inputs and knowledge from racing experience. The latest 2008 Yamaha FZ R6 model is inspired from Moto-GP technology for better handling and greater balance in the twists and turns of roads. In this model, the die-cast aluminum frame is modified to make it stiff in some places and flexible in other areas. Additionally weight is reduced by using a rear sub frame made of magnesium. The rider position is altered for more comfortable riding experience than the earlier R6 versions. The rider now feels at one with the machine and that was the motive behind the change.

For greater mileage and high performance the engine parts such as connecting rod bearing, tensioner, cam chain and so on so forth got strengthened in the subsequent Yamaha R6 models.

However, the most recent Yamaha R6 version looks more stylized, neat, refined and sharper than its forerunners. Yamaha YZF R6 model delivers 133 PS @ 14500 rpm and torque of 66 Nm @ 12000rpm. It has the option of electric starter and TCI (Transistor Controlled Ignition) system. The fuel tank capacity is at 17.5 liters.

The Yamaha R6 motorcycles are good at the first place but further innovation makes it competitive in international sports bike segment with designer touch in styling and engineer’s brain in performance.