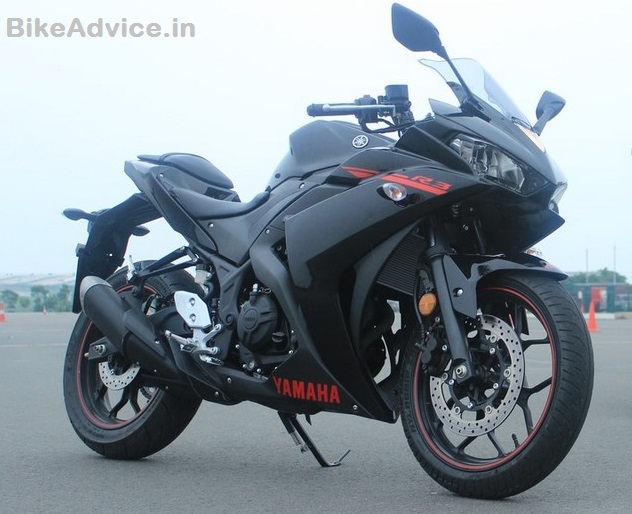 Not too long ago, almost all motorcycle manufacturers were emphatically synonymous with their USPs, which made buying a two-wheeler much simpler. For example, people who wanted fuel-efficiency went straight to the erstwhile Hero-Honda showrooms; Bajaj was entrusted with ferrying a family of five (plus vegetables), and Yamaha was the default choice for performance seekers. I feel those were good days for the companies too, as they all also precisely knew their target customers.

Well, a lot has changed. Hero Honda is not hyphenated anymore; Bajaj has stopped making scooters altogether; and Yamaha does not figure on top of the list of a fast-bike buyer. But, with the launch of the much awaited YZF-R3, it looks like the tuning fork logo is all set to stamp its authority once again in power games. We got to briefly sample Yamaha’s latest at the Buddh International Circuit, and thought of letting you all know whether YZF-R15’s elder sibling has got what it takes to compel others to perform a reality check… 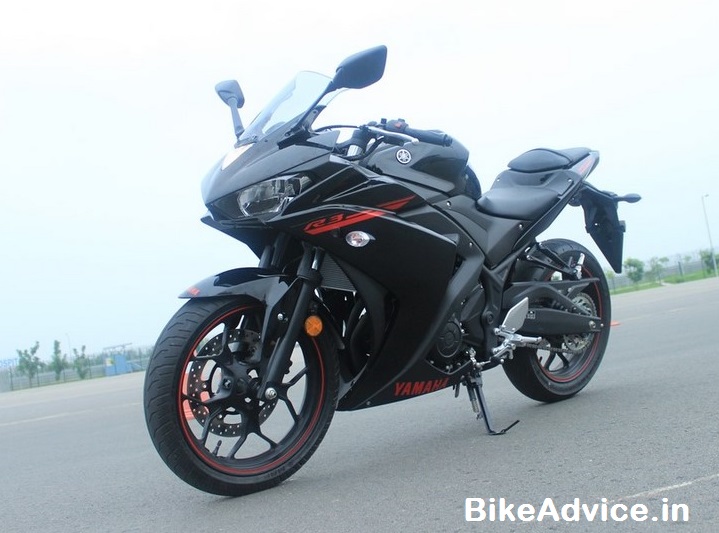 Yamaha, more often than not, designs the best-lookers across all segments, and the R3 is no exception. Without getting all poetic about those sinister eyes or that luscious derriere, let me just tell you that if you like it in pictures, you will love it in person. The proportions are absolutely spot on, making the R3 a motorcycle with perfect form.The bike is available only in two colours — Midnight Black and Racing Blue. I reckon it’s the latter that will get the most bookings; I’ll take the all-black motorcycle then, thank you. Oh, but I love the blue wheels of the, er, blue bike… Okay, I might have to flip a coin to choose. 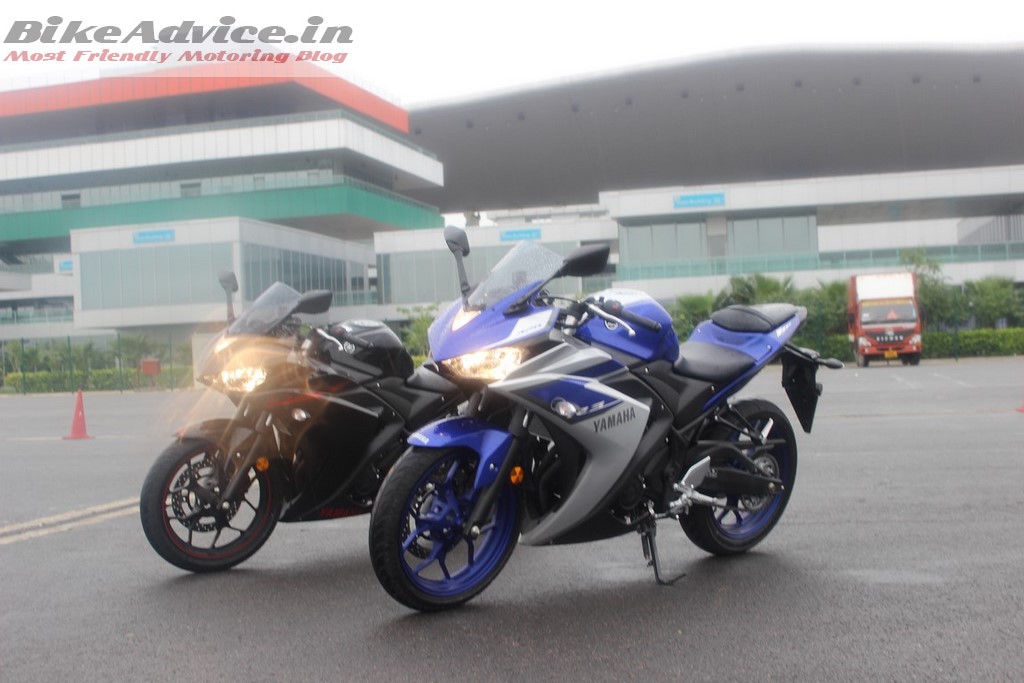 And beauty is not just skin deep here; the build quality too is typical Yamaha (read “excellent”). Plus, the instrumentation is a marked improvement over the Plain Jane unit of the R15 as other than the basic speedo, rpm, odo, etc., readings, it also tells you which gear you are in, and whether it’s time to shift up, among other things. 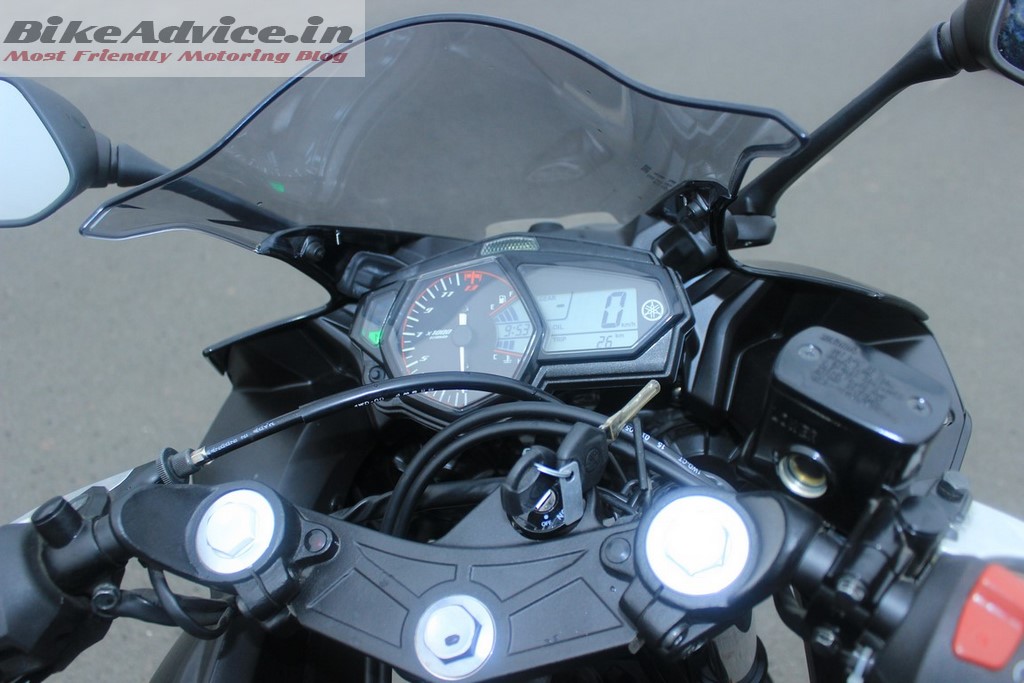 You will also notice that there is no switch for headlamps other than the high/low beam selector. That’s because the headlights come on the moment you crank the engine. No, you can’t switch them off while the engine is running. The low beam stays on as a daytime running light and, yes, the R3 does come with a pass flasher as well. 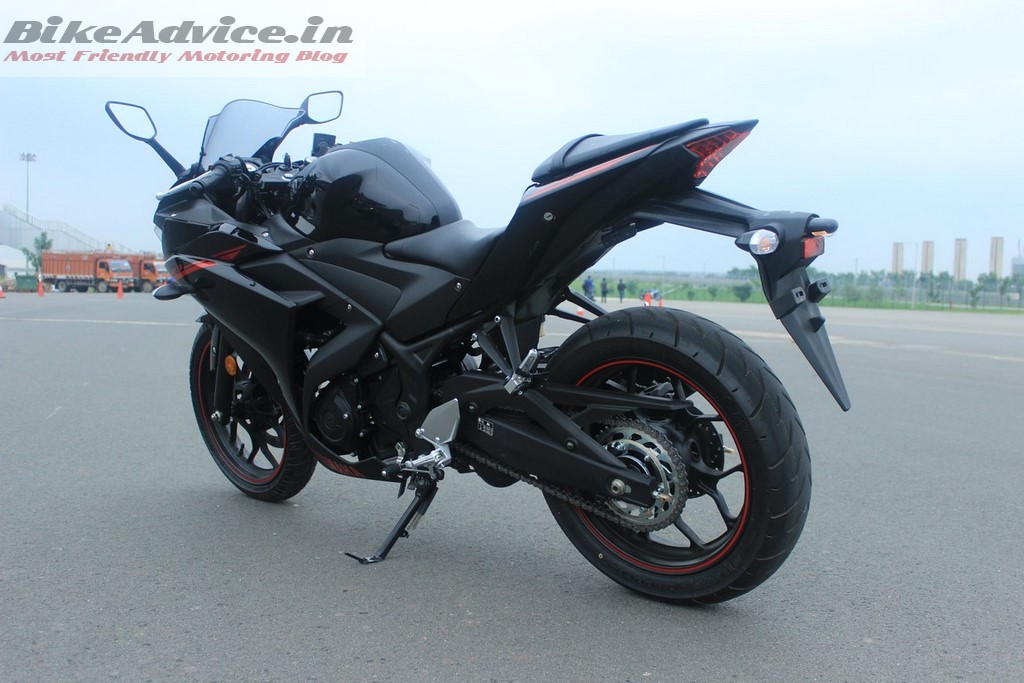 Swing a leg over and you’ll be pleasantly surprised to realize that the seat height is less than the R15’s! At 780 mm, it is 20 mm shorter than the R15’s saddle, making it much easier for shorter riders (like me) to plant both feet on the ground! The ergonomics are perfect and it doesn’t take long for you to get comfortable on this bike and press the starter button. That’s when the 321 cc liquid-cooled parallel twin wakes up with an energetic burble and settles at around 1,100 rpm. Sharp blips of the throttle inform you that the bike indeed has potential… 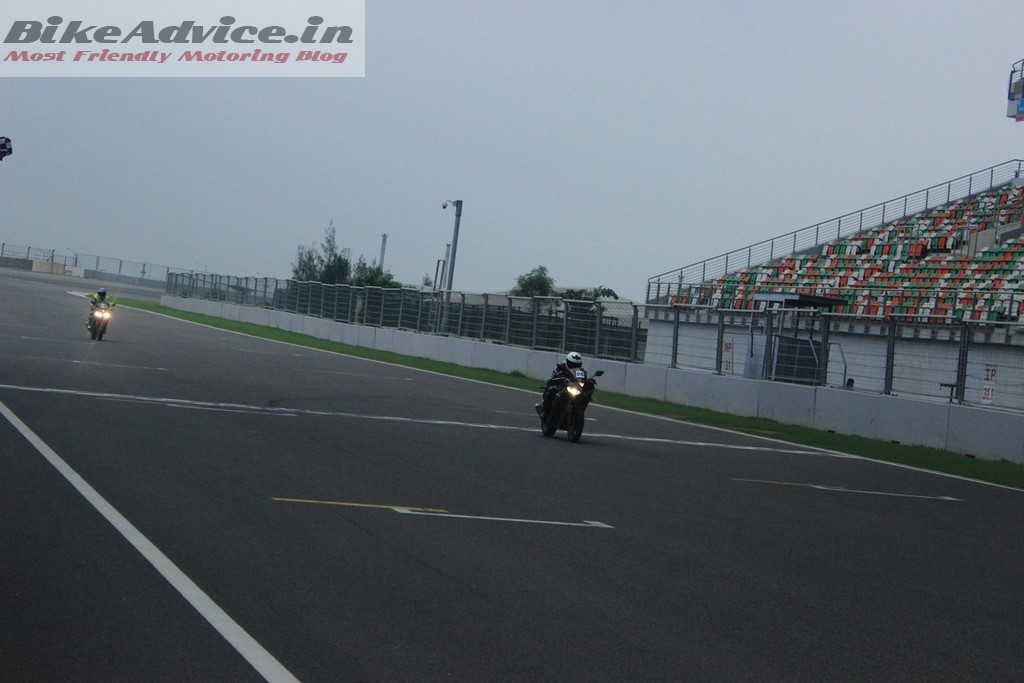 Well, 42 PS at 10,750 rpm and 29.6 Nm at 9,000 rpm are better than the Ninja 300’s anyway, but it’s the progressive build up of power that puts a smile on your face right from the word GO! Of course, the acceleration is not ballistic like the KTMs but this Yamaha is definitely livelier than the Ninja 300 right off the mark. In fact, it feels quicker than the Kawa throughout the rev range! The gear ratios of the super smooth six-speed box extract all that power beautifully, and you won’t be left wanting for grunt at any point in time on our roads. The BIC is a fast track and I did not feel the need to constantly bang through the cogs to remain in the powerband — such is the torque spread of this bike!

The tacho redlines at 12,500 rpm and the bike pulls hard enough to take you beyond 100 km/h in third gear with absolutely zero vibrations! The maximum I could manage on the long straight was a speedo-indicated 175 km/h, and it had felt that the bike would cross 185 km/h with ease. Moreover, despite living near the redline for the better part of the day, it DID NOT HEAT up at all! 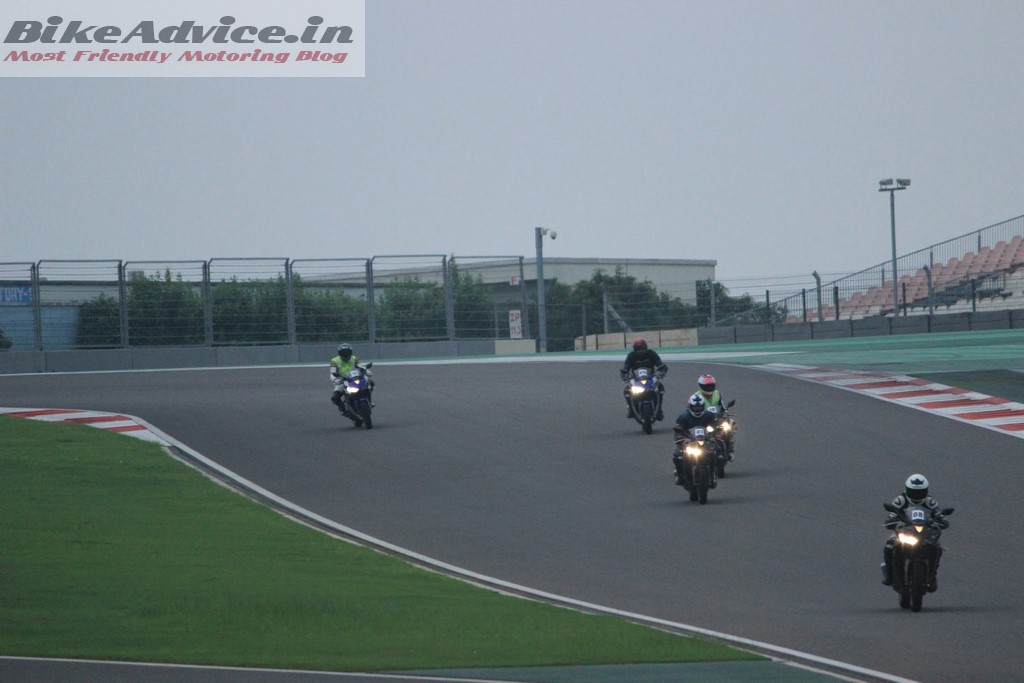 And now comes the most crucial part of a sportbike — handling. I say ‘most crucial’ as no matter how much power you have under that tank, you will be humiliated at the hands, er, foot pegs of a better handling bike, not only on a racetrack, but on public roads as well. 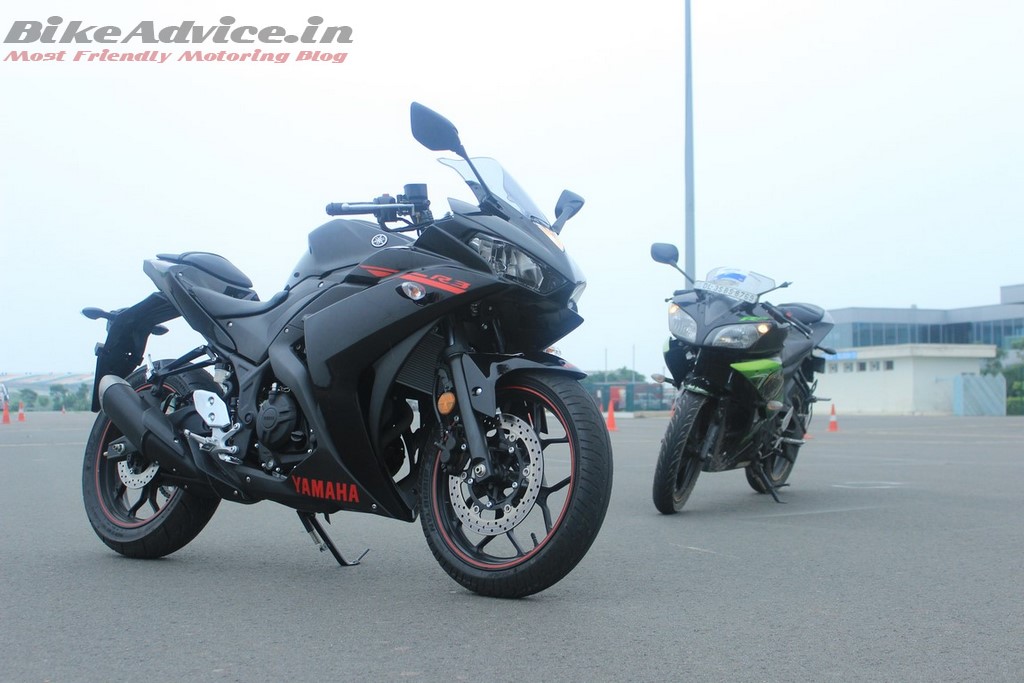 I am happy to report that Yamaha has kept the R15’s legacy intact — its bigger brother handles like a dream. Turn-ins are a cinch and the bike is astoundingly stable in corners — and this was on a damp track! It inspires so much confidence that you start leaning the bike more and more on every corner, despite being a first-timer at the BIC! 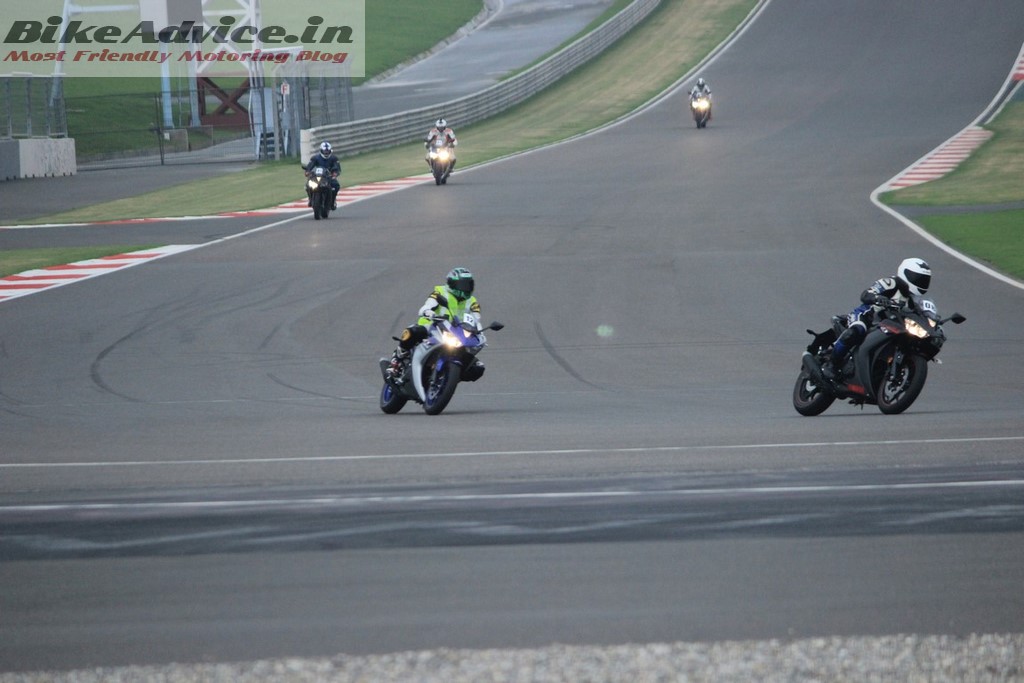 It’s equally stable on straights, and even taller riders had no issues ducking behind the fairing to avoid the wind blast. Thankfully, that stability hasn’t come at the cost of flickability, and the R3 is beautifully fluid in chicanes, requiring next to no muscle power to pick the bike up from full lean and diving immediately into the opposite side with zilch effort. 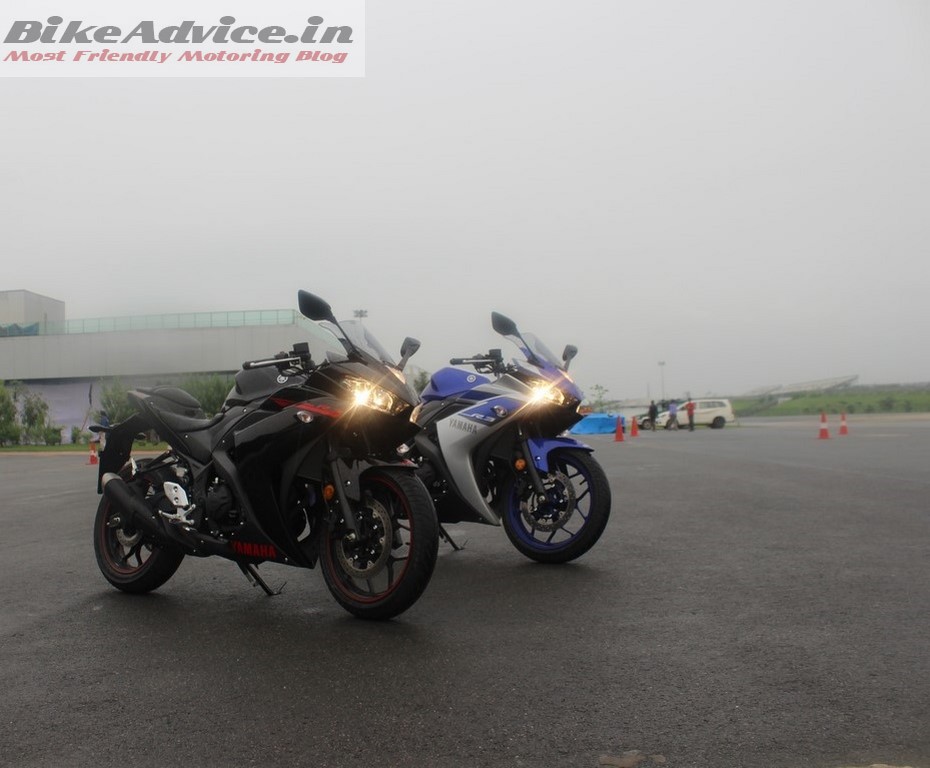 Oh, and those stoppers are incredible! While whiners are already crying for the lack of ABS, and rightly so to be honest, let me reiterate that the brakes are phenomenal. The bite and feel is second to none, and the rotors (298 mm & 220 mm at the front and rear, respectively) continued to shed speed like clockwork without any fade or squeal whatsoever. The brakes not only prevented an overzealous me from landing on gravel, their progressive feel also allowed me to keep on them while leaning over! Super. That should also tell you a thing or two about the grip provided by those MRFs (the whiners won’t stop whining about them too). 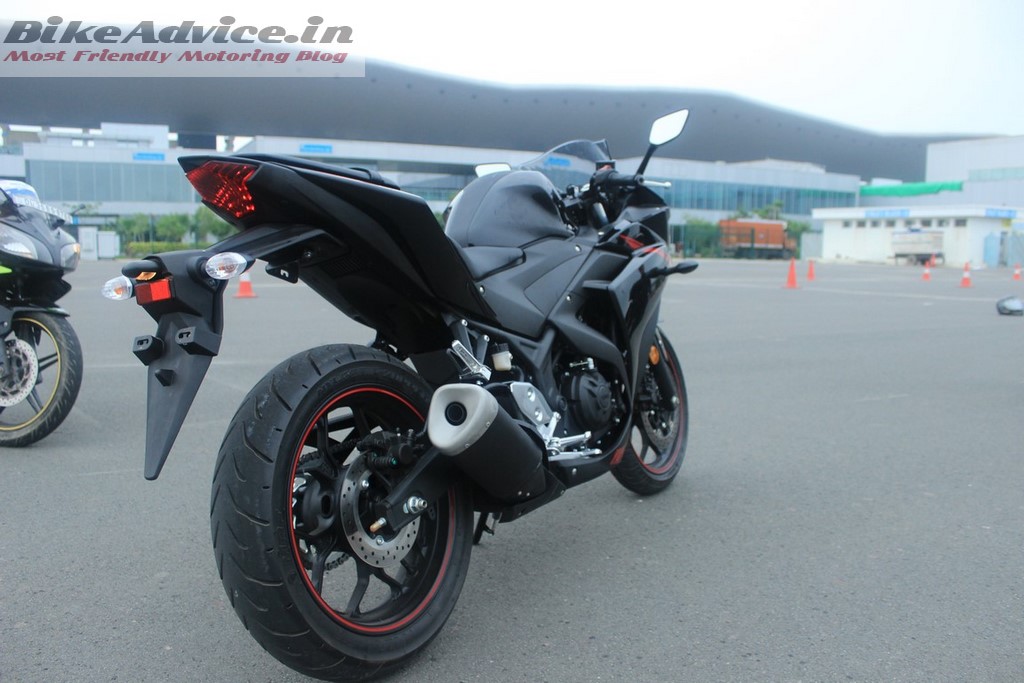 Fellow journos who have ridden the Ninja 300 on track said that the Kawasaki feels softer than the R3. Well, they may be right. The Yammie’s suspension tune felt perfect on the track, and though we can only comment about its on-road behaviour once we have tested it on some, my gut feel tells me that it is going to be a smooth operator on less-than-perfect tarmac as well…

You can check out the following video if you want to see the motorcycle in action. The video also comprises a walkaround, and the engine/exhaust note.

The R3 with all fluids (including 14 liters of fuel) weighs in at 169 kg. The RC390 tips the scales at 170 kg and the Ninja 300 is the heaviest of the lot at 172 kg. Though the difference isn’t much, it would be interesting to check how these bikes fare in a drag with just enough fuel to last 400 meters… The RC might still come on top but the times should be close. Really close. 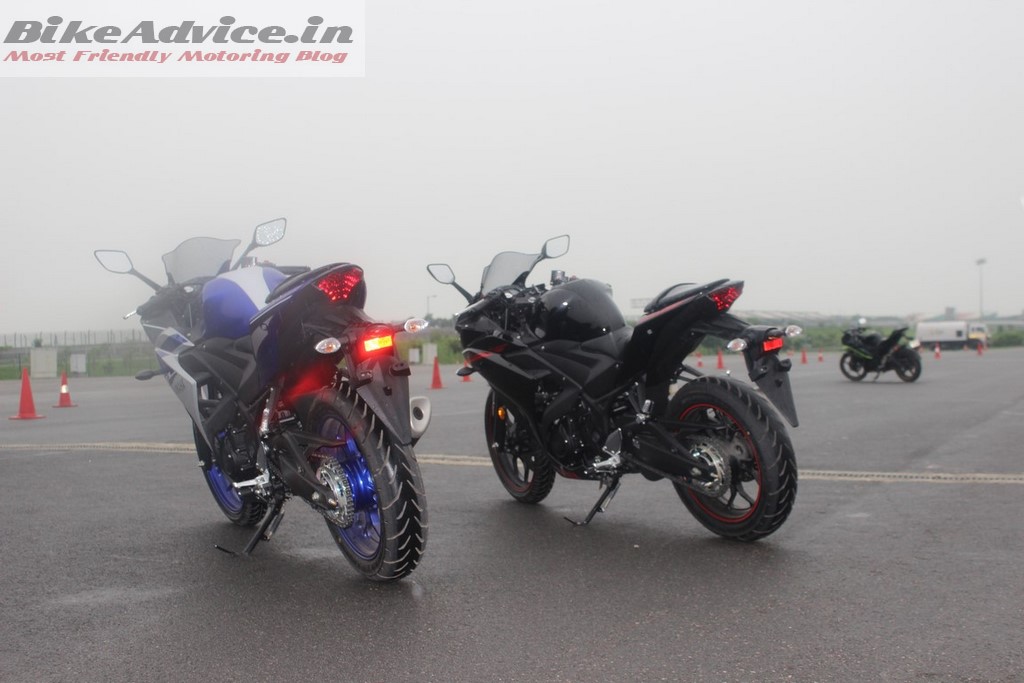 Both the R3 and the Ninja will fight for top-speed honours (the KTM is out, thanks to its limiter) and from the looks of it, the Yamaha should emerge as the new king in this area.

And the new emperor won’t heat up like the KTMs; won’t vibrate like them either; would still be almost as quick and agile, and FASTER; would have a much more comfortable saddle and riding position; would be easier to ride in chaotic city traffic and, being a Yamaha, peace of mind would come guaranteed. Plus, it would be substantially cheaper than its closest rival, the Ninja 300. 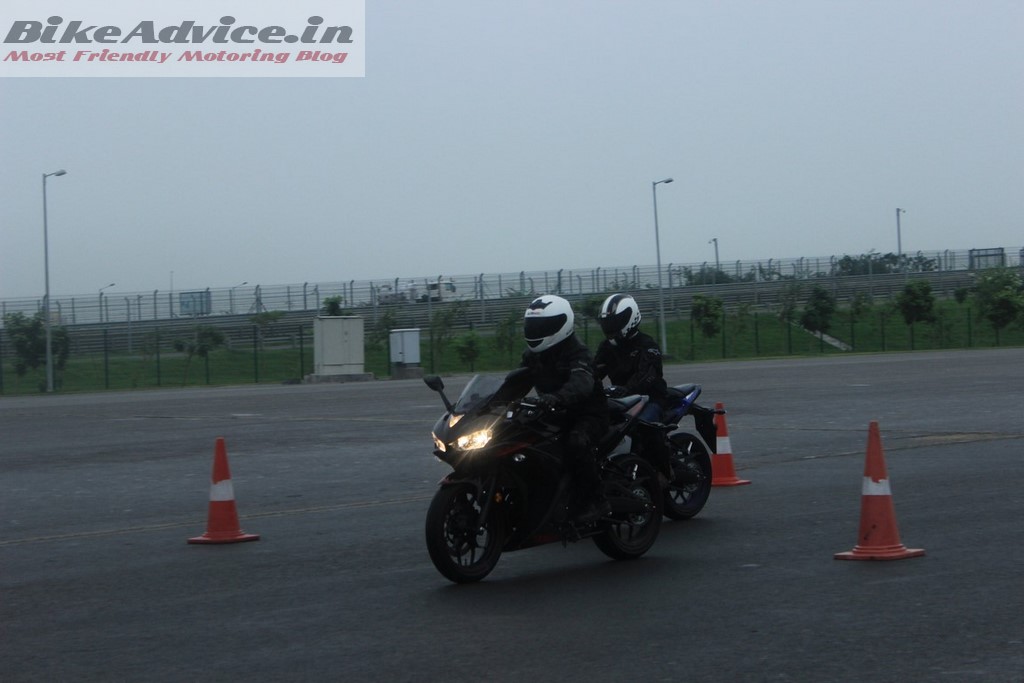 That being said, at INR 3.25 lakh (ex-showroom, Delhi), it still is expensive than the RC390 by more than a lakh rupees. So Rajiv Bajaj can sit back and relax. The KTM is more expensive than the R3 internationally and we can’t thank Bajaj enough for giving us access to a world-class product at an unbeatable price. But, despite being a bomb of a bike, the RC (and even the Duke) does have quite a few niggles. In striking contrast, the YZF-R3, on first impressions, comes across as THE perfect bike in the class.

Let’s see if that’ll be the concluding line of our exhaustive road test review of the R3 in the near future, when we get the bike for a longer duration and put it through our road test rigours on regular roads…

** Fuel efficiency, pillion ride comfort, etc., to be tested once we get to spend some quality time with the bike.**