Lemme begin the review of the Yamaha YZF R15 V2.0 by giving an introduction to Bangalore Wheels. Bangalore Wheels is an authorized Yamaha showroom located in Rajaji Nagar, Bangalore. I approached Mr. T.M.Prabu to have a talk on getting the R15 V2.0 for the purpose of reviewing exclusively for BikeAdvice. Prabu, himself being a biker by heart was indeed happy to offer the bike to us. But, then the bike had not arrived that day to the showroom. So, I was left with no other option but to wait till she comes to the Silicon Valley of India. 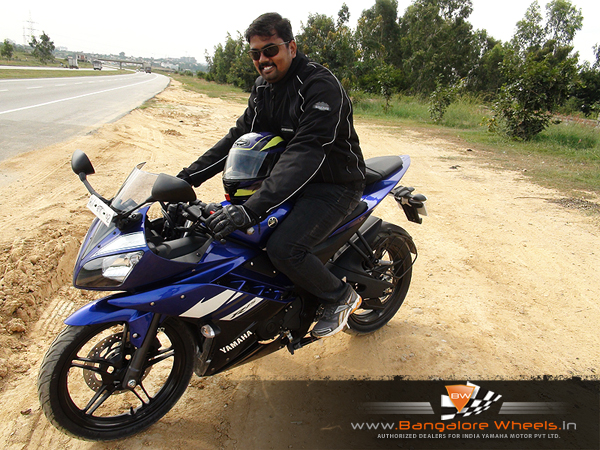 One fine day I got a call from him when I was in college and Prabu was on the other side. The info that he passed to me made me bunk my class and go to the showroom right away. He just said, “Naren, the bike is ready. When do you want her?” Am I a nut to say “Well, not now!” I was in the showroom in the next 70th minutes; 20 minutes to unwrap my jacket and glove to pack them. The remaining 50 minutes was all that I had to ride amidst the (usual and boring) heavy Bangalore traffic and reach Bangalore Wheels.

Now, the bike which made Indian bikers go mad and wait for about half a year was calmly standing for me to take complete control of her. I saw the bike which was standing in the entrance of Bangalore Wheels even before entering the main doors and she was damn appealing. Though, I’d already seen this bike in Delhi at the time of launch in Le Meridian hotel, she still made me stare her for a couple of minutes. Oh Man, she was gorgeous. 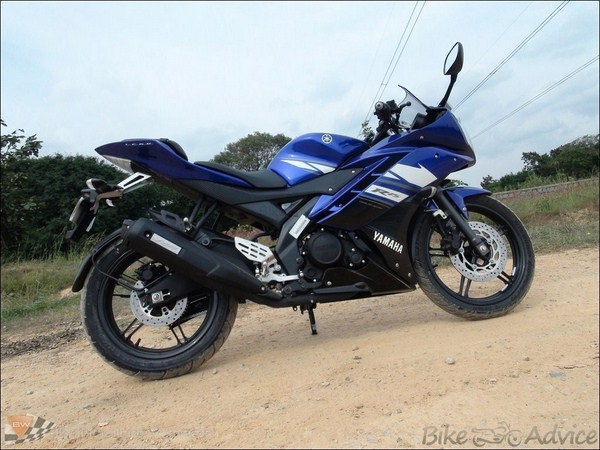 I took the bike along the open highway in order to get to know every single impression she was ready to give me. Since I’d been using the previous version of the R15 for pretty long time, I was eager to know in what manner will she differentiate her from her ancestor.

The R15 to be in specific and Yamaha bikes in general are usually head turners when it comes to their design concept. This is in fact something for which this Japanese giant is known for and is the key factor for the company’s success in the Indian sub continent. The close resemblance of this bike to the R6 (which is my favourite among all Yamahas) has made he looks of this female stunning. There is not much of difference in the front half when compared with the older model, nay the previous model. The front fairing has not seen any change and thereby it’s the trademark R15, when taken a look from the front angle. However, the alloy wheels have undergone a slight cosmetic change. They are shroud with 5 spoke alloy bearing double bar design. 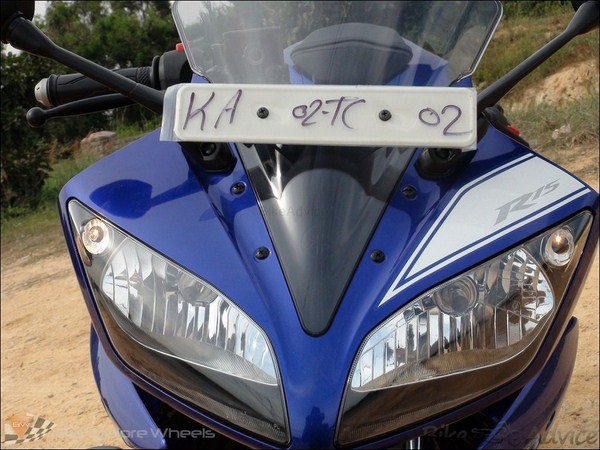 The rear part of the bike is just an R6, if the front half would be covered. The R6 inspired tail light is the beat of all the replacement that the new version is gifted with. Amazing thought by Yamaha engineers. The split seats are perfect race bike inspired and offers the best of the sporty looks which no other bike in India can even boast of.  The way the rear number plate is positioned is inspired from hardcore sport bikes. It actually hangs down in the air. 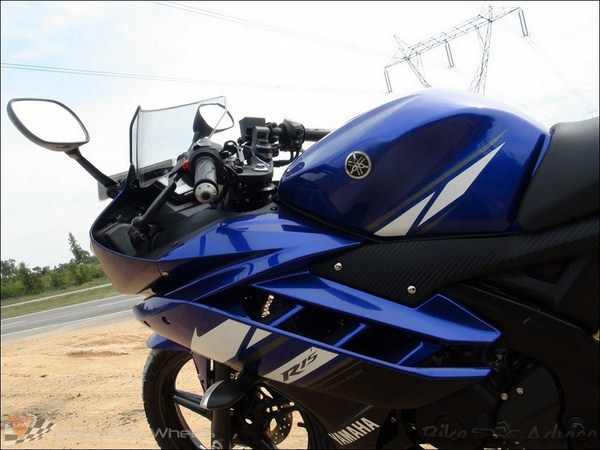 The exhaust is another area where considerable changes had occurred. The ending shape of the muffler is new and classy. The muffler cover is now a kind of black matte sheet with self design embossed on it. This is something which I’ve never seen in any other bike. Though, doesn’t solve any purpose or looks catchy, it is not weird in terms of looks. A small metal strip bearing the name ‘R15’. 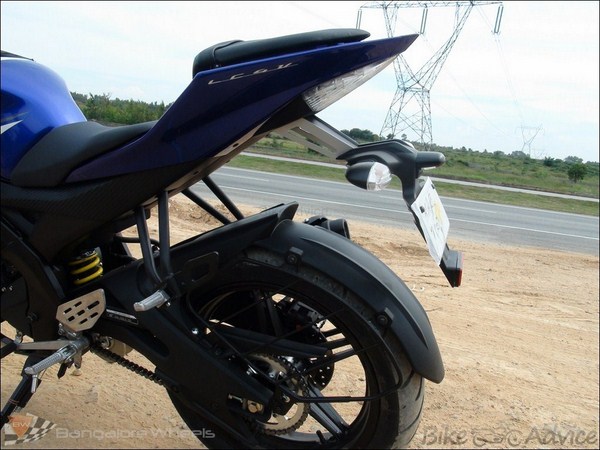 The side fairing is also to an extent, R6 inspired and there are air vents all along the side which besides catering to the purpose of preventing overheating, also enhances the looks of the bike to a greater extent.

Handling of the previous version of the R15 had nothing to grumble about. But, I had indeed mentioned in one of the R15 road test that the company has to upgrade its rear tyre to more bulky one and that has come true with the version 2.0. The rear tyre is now 130/70-R17 which has also resulted in addition of weight on the rear. Moreover, the rear wheel is now ‘Radial’! This is something to rejoice, truly. To mention a word about the bike’s front tyre, it is 90/0-R17 in terms of its dimension. 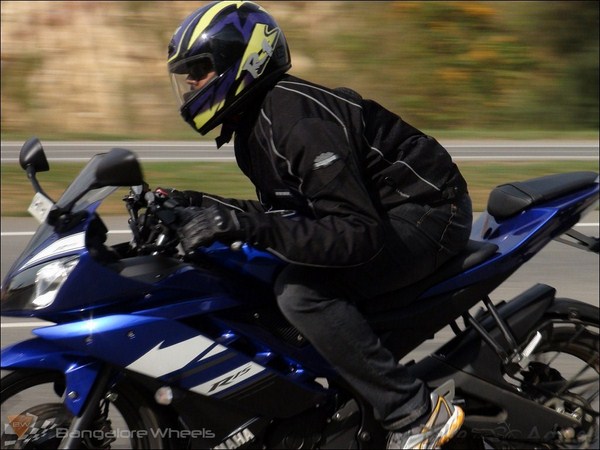 The new wider tyre offers decent road grip than the older one. I tried riding the bike off the road along muddy surface for about a mile and the bike didn’t deviate a lot out of the line. This will have a direct impact when the bike is tested in the racetrack. Cornering this bike is as fun as the older one. 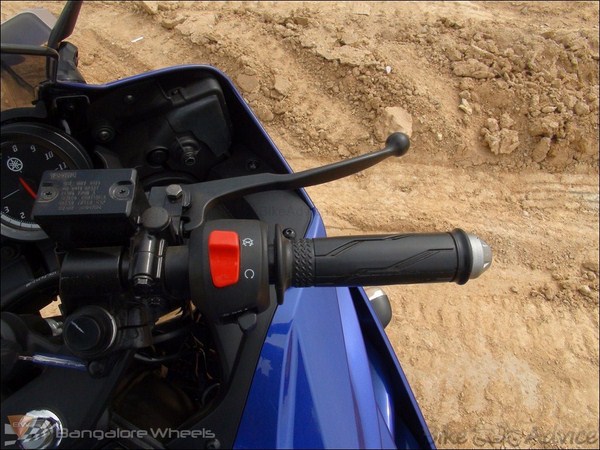 There is one fact I need to share with our readers at this point of the write up. I’ve always felt that the R15 is the perfect bike for a stoppie and the FZ is the one for a wheelie. But, the bulky rear wheel makes it a little difficult to pull the rear wheel up. Still, that’s not impossible but just a little more effort is required. 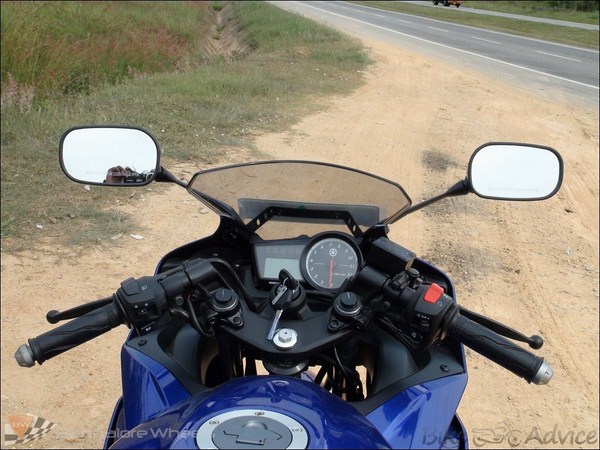 It is exactly the same as the old one. The bike houses a fully digital console with a set of two tripmeters, fuelmeter except the tachometer which is in the analog format. There is nothing much to share about this cluster at this point of time.

The seating position for the rider has not seen any change and hence offers the best of sporty riding position. The new rear tyre makes the bike more trustable at high speeds. The new version lacks the grunt while revving the bike at lower RPMs, which should be the result of the new ECU that this bike is fitted with. But, once the bike crosses 4000 RPM range, it handles brilliantly without any major vibration. 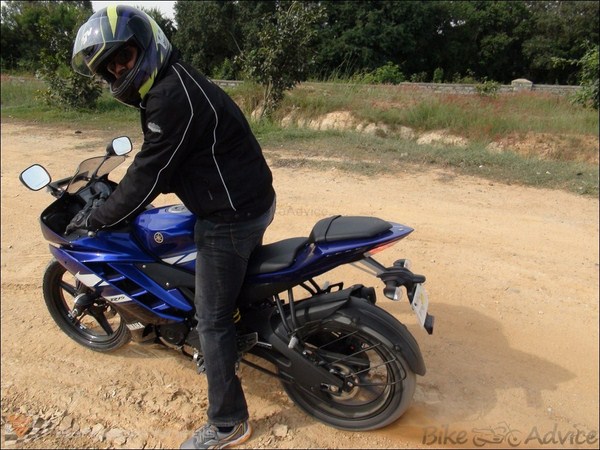 I pushed the bike to 134 kmph and that was all the bike was able to go as it was a brand new bike and the speedo showed just 0.8 kms on the speedo when I took her out freshly from the showroom. A regularly used bike should be able to hit 140 kmph mark on a long straight stretch. This is pretty similar to the speed of the previous version R15. The best part is that the R15 V2.0 exhibits its Racing Instinct, not only in the track but along the highway too. The suspension hasn’t seen any change but the revamp in design in the rear makes you feel that the suspension is also better than the previous R15. 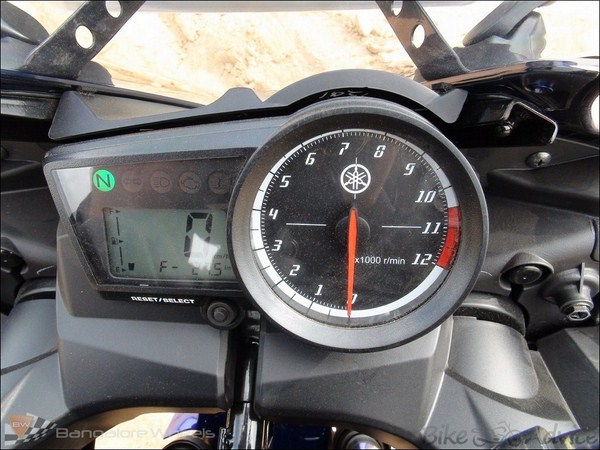 However, it would have been a greater experience if Yamaha had launched this version with an optional ABS too. Would have been really fun then; time for Yamaha to launch bikes with ABS for the Indian market.  If possible, C-ABS would be even more great. 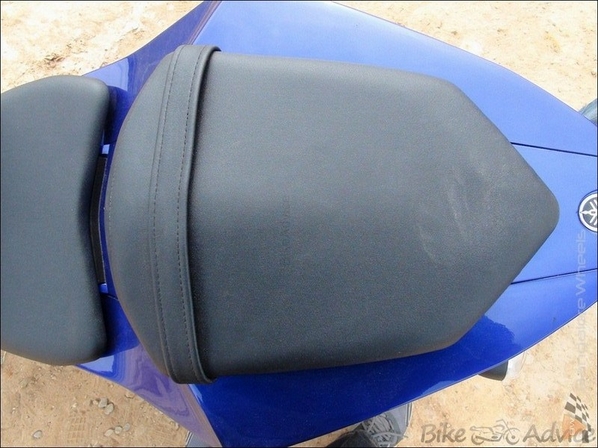 This is the controversial part of this bike. As I’d mentioned earlier, this is more of a sport bike unlike the old version which is majorly designed to cater the commuting purpose.  The rear seat is too high and irrespective of the height of the pillion rider and irrespective of it being he or she will find it difficult to sit during city commuting. 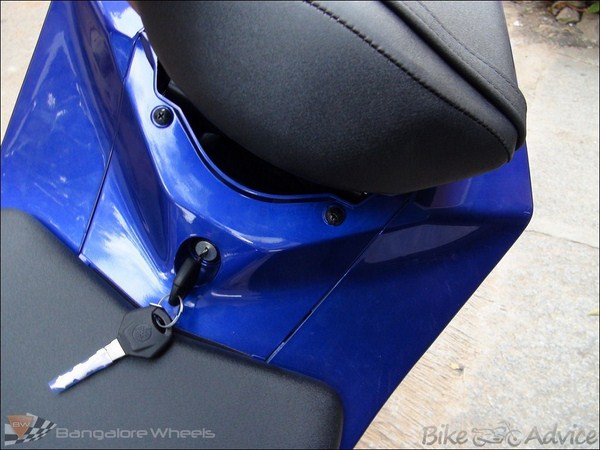 The reason attributed for this uncomfortness is the height of the seat as mentioned a little earlier. A hard brake will make them move front which towards the end irritates the rider’s position. However, this is not gonna be the case during long rides. The pillion seat is claimed to be Slip Resistant by Yamaha. But, the failure of a grab rail makes pillion rider’s position complicated, although it enhances the bike’s looks greatly. 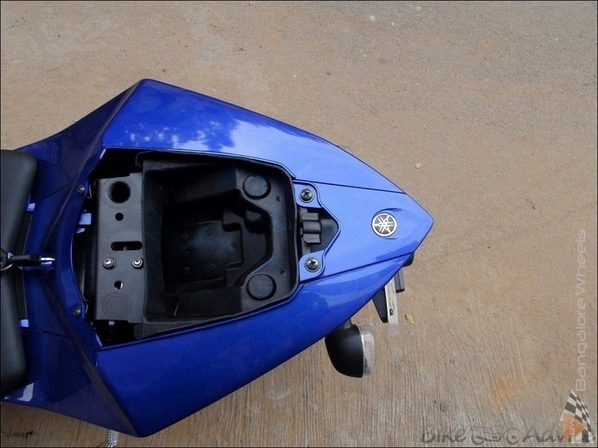 But, as far as I’ve observed, most R15 users don’t go about with a pillion rider. If you think that the frequency of you, going out with another person is considerably low, you can proceed with this sexy bike.

It is not possible to bluntly conclude that the bike has only undergone mere cosmetic upgrades and nothing else. Yamaha YZF R15 V2.0 becomes the first Indian 150 cc bike to house an Aluminium SwingArm, which has aided in weight loss compared with the earlier SwingArm. 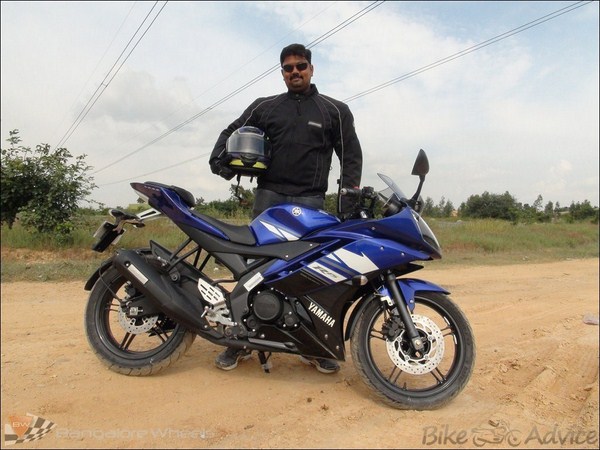 The engine ECU is tuned for improved performance, which is felt at the time of revving the bike at high speeds. This would probably make the power felt in the closed circuits. Brakes are another impressive factor about the new version R15. The dimensions of it are mentioned above. So, I don’t wanna touch upon it again. 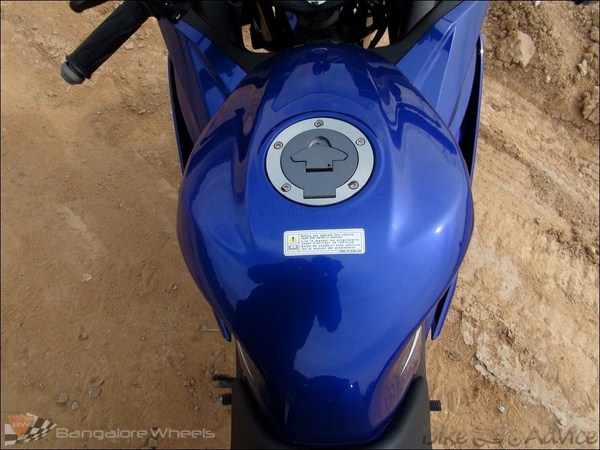 The figure will almost be more or less similar to the previous version as there are not much of engine tweaks done except the ECU getting tuned. The Yamaha YZF R15 V2.o should return in the range of 38+ kmpl if properly taken care of, which is a good figure for a sportbike which can perform as good as this. I personally feel there is nothing to regret about this figure. 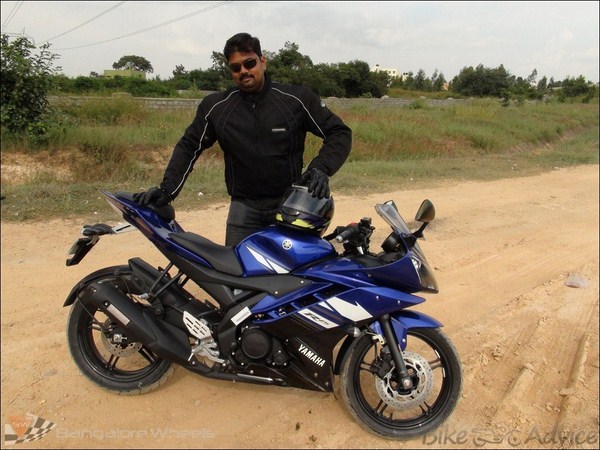 Overall, this bike is a perfect piece of art from Yamaha. It doesn’t ditch the expectations of a guy with biking spirit instilled inside him. However, it is to be clearly mentioned that this is not the bike for pillion riders. This is the only drawback when it comes to overall performance of this bike. Riding experience is something you’ll treasure for a long time and will take time to get faded out from your memory.

The interest and the intensity of the effort that Yamaha has put in designing of this bike have not gone fruitless and this is some fact for which the company is really to be appreciated for. Though the overall weight of the bike has gone up by another 5 kg, it is all part of _______ weight and hence doesn’t affect the performance. To comment about the bike in one line, ‘The Perfect Sportbike For India Has Gone Even More Sportier In Terms Of Visual Attractiveness And Performance’.

When I reviewed the earlier version of the R15 a long time back, I still remember offering a comprehensive score of 4.5/5 and I don’t mind offering the same score again for this hotty.

BikeAdvice thanks BangaloreWheels, the authorized showroom for Yamaha located in Rajaji Nagar, Bangalore for their constant and consistent support offered to us which has helped us greatly in coming up if this review.

I personally hope this review has aided our dear readers to a greater extent in getting to know more about the Yamaha YZF R15 V2.0.

Here is the brief specification list of the Yamaha YZF-R15 V2.0 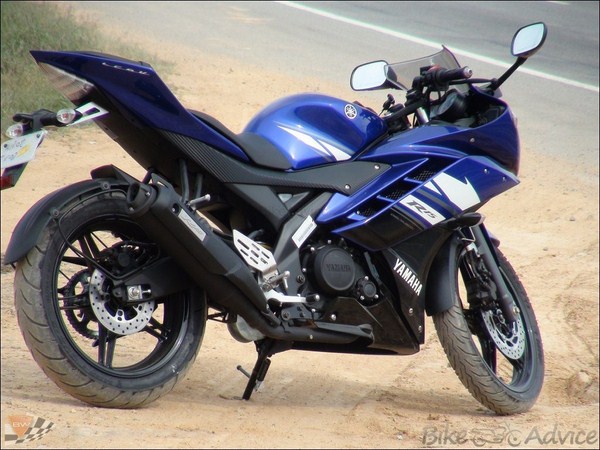 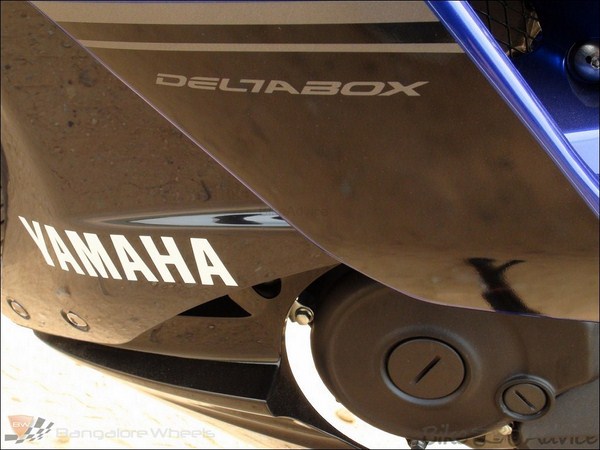 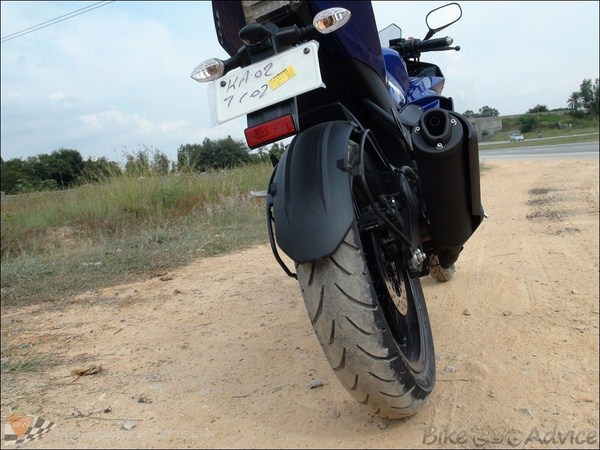