Market Research plays a vital role before launching any new product. Way back in the year 2008, when Yamaha decided to launch its YZF – R15, the general  perception of the people was that who would pay more than a lakh of Rupees for a bike with a mere 150 cc engine. But, Yamaha flipped the market towards them with the coming up of this beast. The bike had swept the entire segment that year with 4 of the most prestigious awards given for bikes. 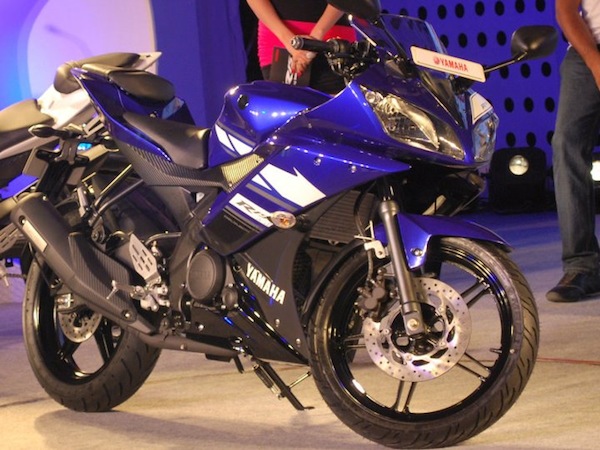 That was a small flashback to tell you how the bike came into the sub-continent initially.  Today was an important day, not only for the company, but also for all bikers, for it was they who have been waiting for about 6 months to get to know what the Yamaha YZF – R15 Version 2.0 is actually capable of and in what way it is gonna be different from its previous model.

The entire launch ceremony happened in the Le Meridian Hotel in the capital city. It started by 11.30 in the morning. The grand ceremony was preceded by Mr. Hiroyuki Suzuki, CEO & Managing Director, India Yamaha Motor and Mr. Roy Kurien, National Business Head of IYM. 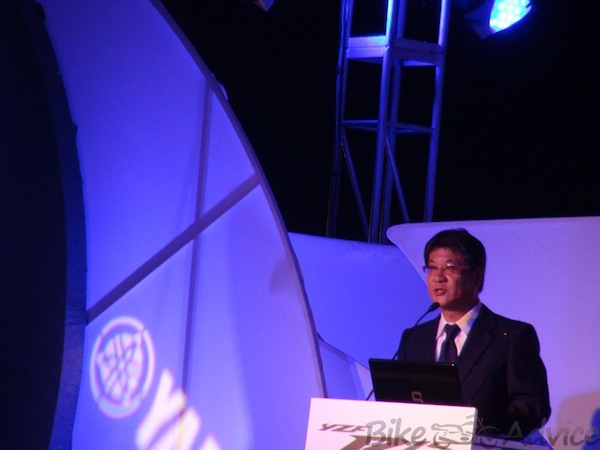 Mr. Hiroyuki Suzuki first addressed the gathering. He said, “The industry demand has rose to 6.2 Mn units, up by 18 per cent from the previous year. We expect around 17 Mn units. This steady growth demand should continue till 2012.” He then added, “Yamaha India Motor had sold 150,000 units the domestic market during the first half. This is 14 per cent more sales than the previous year.”

“In the 150 cc segment, which is our focus area, our sales have doubled”, he said. He also spoke a few words about the other models from Yamaha’s stable as well. “Last year, we introduced SZ-X to meet our growing demand in the commuter segment. Earlier this year, SZ-X got six awards from various media. Our SZ-X is enjoying brisk sales. In addition, our popular FZ series got minor changes this year. This model also continues o maintain high sales.” 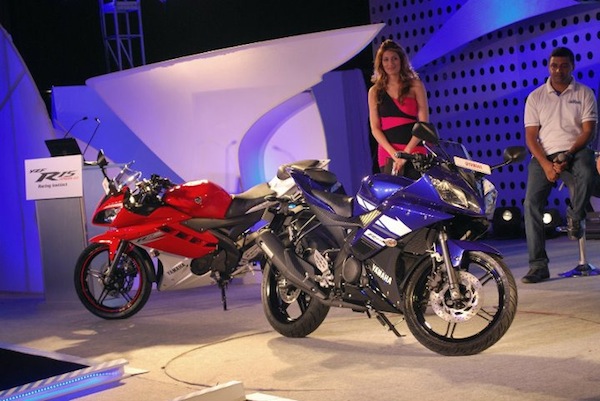 He also me mentioned a few words about the R15 in his short speech. About this bike, he said, “R15 has evolved its racing DNA, in inheriting its racing DNA of super sports from the R1 model. This model has become more attractive with newly designed sporty, stylish features such as a long aluminum swing arm, wider front and rear tires, split seat, LED taillights and new-design middle cowl & tail cowl.”

“We are confident that our customers will have exciting experience… With Daytona racing parts, R15 one make race will be much more enjoyable racing experience. ”

Finally, before ending up his speech, he mentioned a few words about Yamaha’s other activities. “Safety riding education is provided for elementary school students and for the college students too. Through Yamaha Safe Riding Program in co-operation with Yamaha dealers and local schools and colleges. We provide safe motorbike riding experience and contribute for an accident free environment. ” 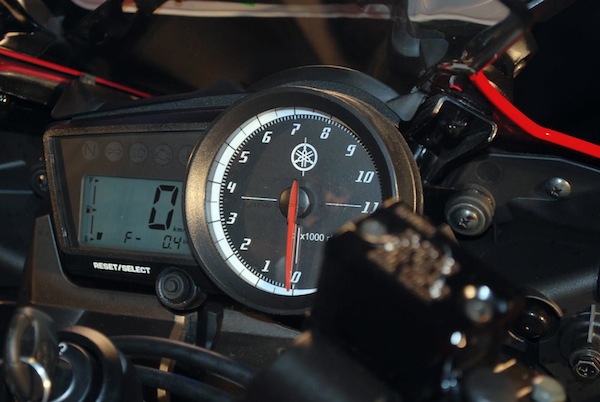 Finally Mr. Suzuki said, “We are committed to provide the value of Yamaha brand under the slogan ‘Yes Yamaha’.”

Then came Mr. Roy Kurien, National Business Head of India Yamaha Motor to the stage. He said, “Yamaha was re-born in India in the year 2008 with the revolutionary YZF – R15 sport bike.” 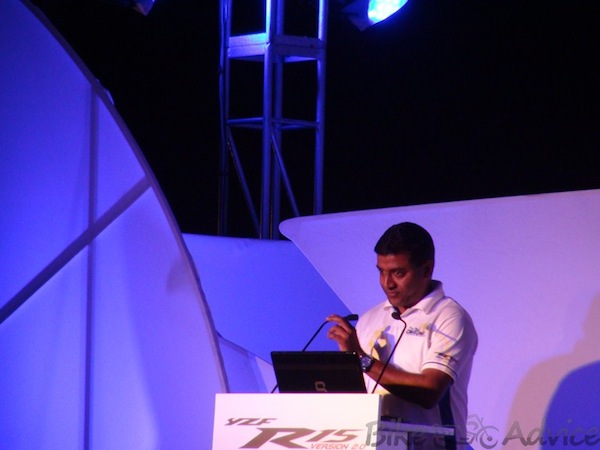 It was interesting to hear him talking about YBS, which stands for Yamaha Bike Stations. These are world class showrooms designed specifically to cater the Yamaha users and customers in all possible means related to their bikes. 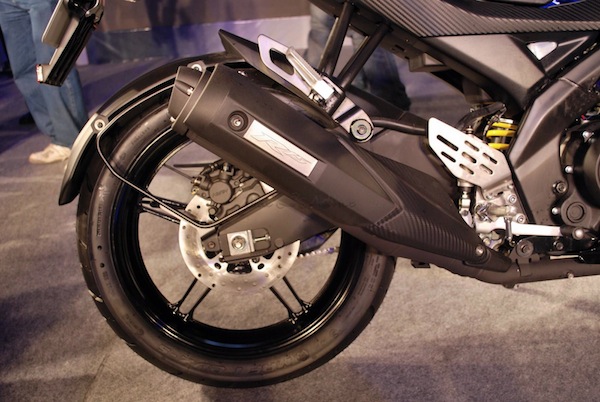 Soon after this, three guys in full racing kit rode the bike to the stage. There were all the 3 colours brought to the stage amongst much fanfare. I’ll bring the review and the detailed styling factor of this bike in a separate write-up. The photographers thronged around the bike to click pics of it and then the stage was opened for Q&A session. Just before this, he declared the price of this machine which was 1.07 lakh (Ex – Showroom, Delhi). 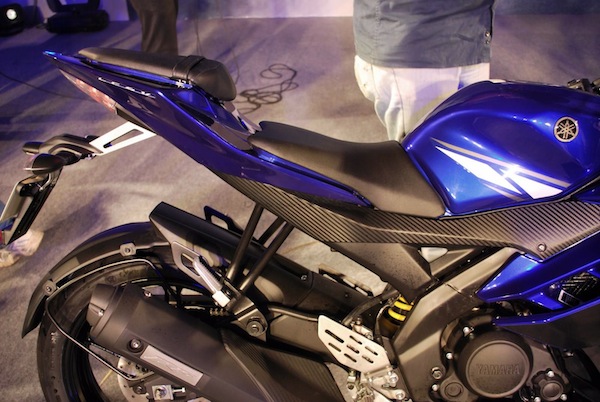 When asked about, “In how many showrooms will this bike be initially available?” Mr. Roy answered, “This is a nationwide launch and would be made available in across all the 400 dealerships and the sub dealerships in a parallel fashion.”

For a question which was asked about the fuel economy of the bike, he replied, “Expect an economy of around 45 kmpl on road.”

Then I asked them, “We’ve been hearing too much about Yamaha’s plans to foray into the scooter segment. When is that gonna happen?” The reply from their side was, “We’ll be launching the scooters next year. Our new vicion is to come up with a new model for this segment.”

There was also a question regarding the necessity for the R15 V2.0 while the old existing one is itself a big success. Mr. Roy answered, “Based on the customer feedback and requirements, the new R15 V2.0 is launched.”

This is exactly what happened in the launching ceremony of the much anticipated Yamaha YZF – R15 Version 2.0. As I’d mentioned above, I’ll come up with a separate write up about the new version of the existing bike. Hope you enjoyed this. Didn’t you?