It was really great to be one of the very few who have taken the glimpse of the newly launched Yamaha YZF-R15 V2.0. Let me share how the bike exactly looks like and what Yamaha Motor India claims about the bike. 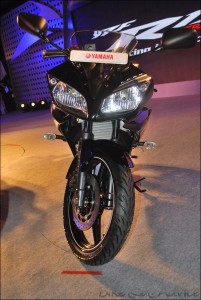 The entry of the bike to the stage itself was very stunning. Unlike the regular stripping the cover on the bike to reveal it, the company tried the new method of making 3 guys in full racing suites to ride the 3 different coloured bike onto the stage from the other end of the hall.

At the first shot, the bike looks really cool and it is very visible that the bike has underwent major cosmetic surgeries in order to make it even hotter than the current model. Unlike most other companies, to whom upgrades mean just a change in paintjob or graphic designs, Yamaha has really taken the pain to come up with the next version of its flagship model.

The front half of the bike is almost the same except the alloy and the side fairing. I’ll come to the alloy wheel a little later. Regarding the side fairing, there is a slight change in the way the air vents are placed. The company claimed that this would aid in improving the resistance value by as much as 4 per cent compared with the existing model, which in turn will improve the performance of the bike.

The rear part is entirely fresh and is damn appealing. The rear part of the bike along with the rear set is pushed up which gives a feel that the rear seat is actually swinging freely. Yamaha claims this seat to me slip resistant.  There is also a storage compartment under the rear seat and the lock for it is visible clearly, but it is not (at all) odd in terms of looks. The mono-shock at the rear looks very sexy with this modification even though it existed in the old one too. 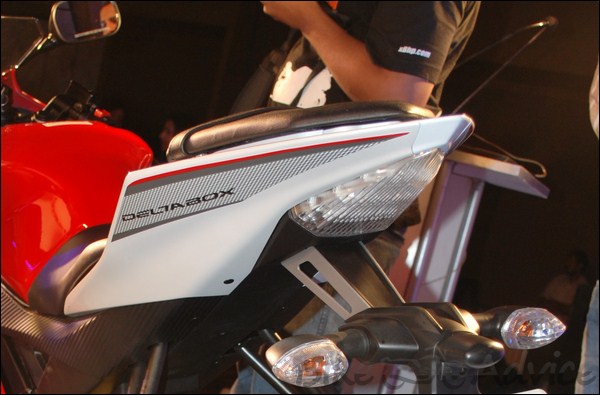 The grabrail is removed from the rear seat, which assists the machine in offering a perfect sport bike look which is the exact kind of image with which Yamaha wants to project the R15 Version 2.0. The excellently designed LED tail light adds to the brilliance of the design. A very look at it would reveal the fact that is derived from the R6. I, being a big fan of R6’s design admired this new version to the core. 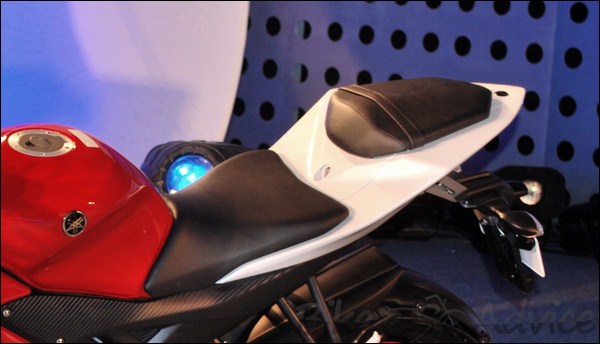 The swing arm is completely made of aluminum which aids the company in claiming to be India’s first 150 cc bike to house an aluminum swing arm. This will help the bike when being used in race tracks during cornering.

One fact I didn’t like in the bike was the usage of saree guard. But, as Indians we don’t have any options and we’ll be forced to have them fitted on the bikes, irrespective of it spoiling the design or not.

There is also a small metal piece that is fitted onto the exhaust which displays ‘R15’. What made me wonder was the fact that every single change that this bike is incorporated with is visible just on the first sight. Brilliant work mates! The way the end of the exhaust appears is also new. 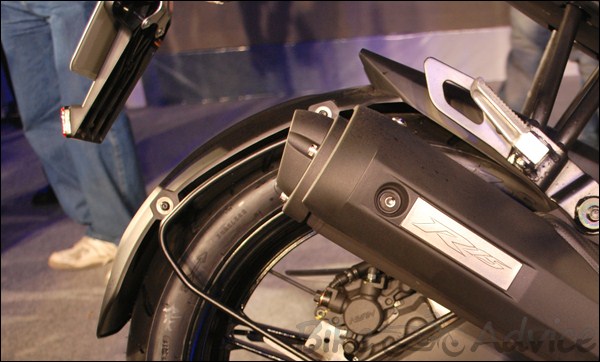 In one of my earlier review about the current model, I’d mentioned that the bike badly needs a wider rear tyre. I was relieved seeing the wider tyre at the rear as the bike passed me to the stage. The 130/70 radial tyre adds to the stability of the bike. The front tyre has also become fatter by 10 mm with the new 90/80 radial tyre. 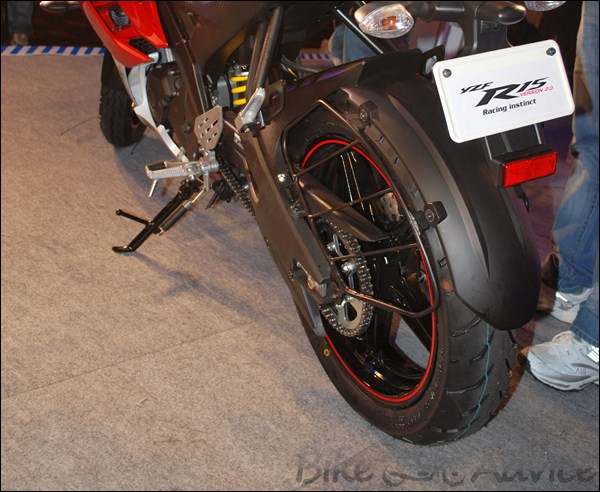 The 5 spoke alloy with double spokes looks not so impressive, but doesn’t spoil the look of the bike from any side. This is another new addition to the new version.

Apart from the looks, Yamaha also claims that the performance will have an edge compared to the existing model with the installation of new ECU and a drivetrain. In order to comment on this, we’ll have to get our hands on this bike which will reveal the truth.

There was a question put forth to Mr. Roy Kurian, National Business Head of IYM which was, “On what basis did you come up with this new version?” He said, “The customers of the current model were satisfied with the front half of the bike, but they felt that there existed a scope for improvement at the rear.” 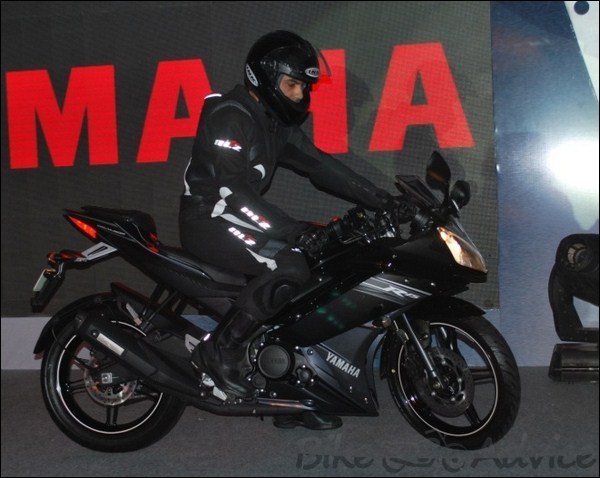 Three colour schemes of these bikes were displayed at the stage. Out of the three, the one with Sunset Red share is truly an eye catcher. A close observation of this bike will reveal the fact that there is a dual colour scheme employed. The white paintjob is amazing, especially at the rear where the space between the rider’s seat and the rear seat is painted in white. Oh Baby! That’s still in my eyes.

We’ll try our best to get a ride on this new model – Yamaha YZF R15 Version 2.0 as soon as possible so that we can update our dear readers about the performance too.