Yamaha R15 One Make Race Championship concludes with their fifth and final leg of proceedings at Madras motor race track, Chennai. The event was a huge success as it filled youngsters with ever rising excitement and the crowed turned out to witness the conclusion of the two day event was humongous. 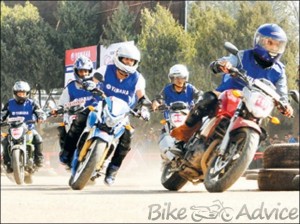 Yamaha organized the championship as a part of SIDVIN-FMSCI National Motorcycle Racing Championship 2010.

Usually Yamaha includes only its customers to participate in such events but this year both Yamaha’s customers and non-customers could take part.

The company says that this will inculcate a sense of consumer loyalty towards their brand which will eventually result in increased customer base. The event became more exciting when the bikes of the riders were mounted by Daytona racing kits. The event concluded in great style and Yamaha plans to introduce more such events in future.

As far as the results are concerned, Mr. G.R. Santosh of Bangalore was in 1st position followed by Mr. B. Lalrutsanga and Mr. Arjun E.B as runners up in Novice category.

The first race was followed by second race wherein Mr. Arun J Pillai of Chennai was crowned as the winner followed by Mr. G R Santosh and Mr. Deepak Pepineni.

After the novice segment, races were held in expert segment. The winners of the expert segments were Mr. R Deepak of Chennai (1st position), Mr. Shayam Shankar (1st Runner Up) while Mr. D. Dinesh Kumar (2nd Runner). Lastly, Bike Advice congratulates all the winners and hopes that Yamaha keeps up the good work in the future as well.