About one and a half years ago, I was sitting in my room alone and thinking of getting a new bike. I was still in college then and drove around in an old Bajaj Calibre which used to belong to my father. As I searched the internet for second hand performance models and cheaper new bikes, I found a very interesting deal. 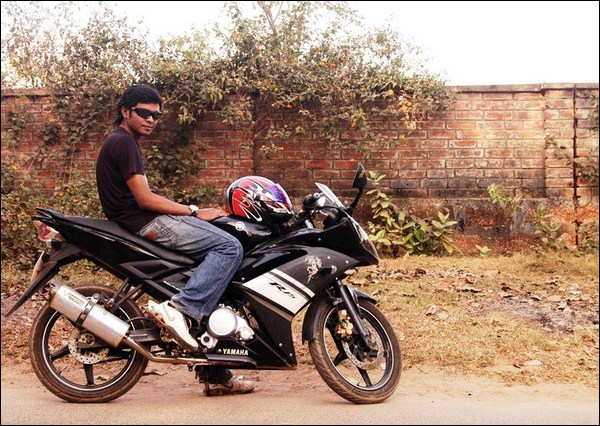 A Yamaha R15 was up for sale. It was only a year old and the owner needed immediate cash, so he was selling it for forty five thousand only! I was delighted to say the least and immediately called home. I asked my parents for the money and they simply refused. They even made it a point to make a joke about it by offering me five thousand to buy the bike.

I checked my account balance and it was only rupees six hundred and ninety seven. I couldn’t sleep that night. I had to come up with a way to get her. I always liked the Yamaha R15 but at over a lakh I always thought she was out of my league. But I was determined to get her.

Over the next few days I laid an entire plan which would help me earn the money over the next 4 months. I sold some of my old stuff and put the money into a small business. I also started teaching 3d Max software and worked freelance on architectural visualization projects. (I was studying to be an architect back then). I worked for it morning to evening ran, my own business and taught students. 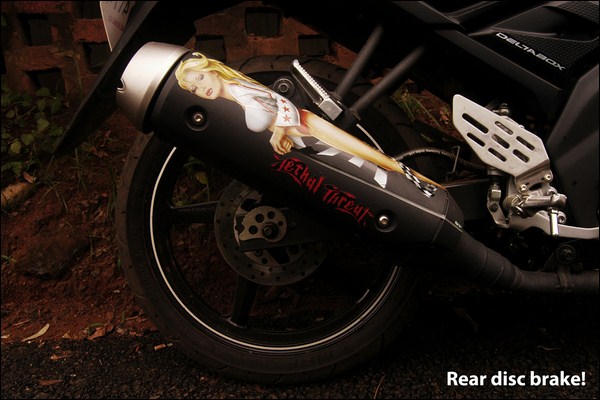 4 months had passed. I was considerably thinner and richer by fifty thousand. I went home and eventually made my way to the Yamaha Factory Shop (YFS) in Kolkata. My parents didn’t know anything about my plans and they were shocked after learning that I had amassed so much money in such a short time.

Now the Yamaha factory shop is a super showroom. They have hundreds of each model in stock and if you are lucky you may catch an R1 or MT-01 in the servicing area. On the first floor on the display pedestal she stood in all her sleek black glory, my Yamaha R15. I named her right then, sweetheart.

Adjusting to My New Bike

If you are moving from a commuter bike to a R15 the first thing you notice is the different riding posture. The legs go back and the hands move a little forward, giving you the racer feel. The six gears are also there. The gear ratios are very different as well. In the initial stages I tried to get attuned to the engine sound as that sound tells you when to shift. 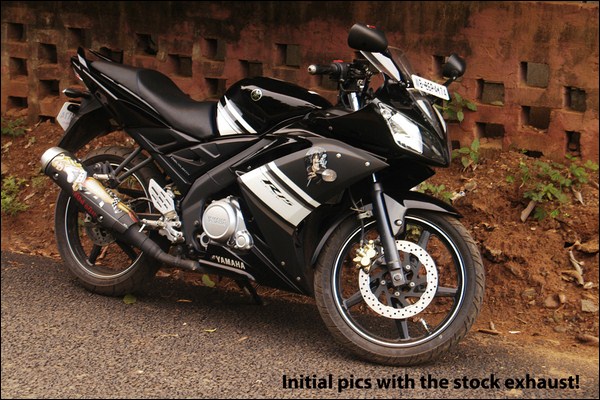 Being an NFS fan, I am very fussy about the ‘perfect shift’ as it gives you that high adrenaline pick up. I rode my bike for a few hours every day, tuning myself to the machine and it was very smooth at all times. As the bike was doing its first 500 kilometres I never took it over 70.

That is what the manual recommends; 4000 rpm at 6th gear gives you the speed of 60 km/h. I am one of the rear people who actually believe in reading the manual. After the driving it for over the first 500, I took it over for it’s first servicing and coming out of it I hit 100 km/h for the first time. No vibration, absolute stability and that continuous drone of the engine. Absolute bliss.

Yamaha has probably said everything about this bikes features. You can all go over to the manufacturer’s website to take a look. But what does it mean to the end user? First of all, the six gears make it suitable for power and mileage modes. Just take it to 50-60 in 6th gear and it should give you over 45 km/l.

Or go to the over hundred mark on 6th gear and blow the wind and gas at the same time at only 30 km/l. I have done both and they both have their own advantages. The bike is very stable at high speeds and even in corners. Probably the best in cornering barring the Ninja. Don’t let the thin tyres fool you; they hug the track like glue. 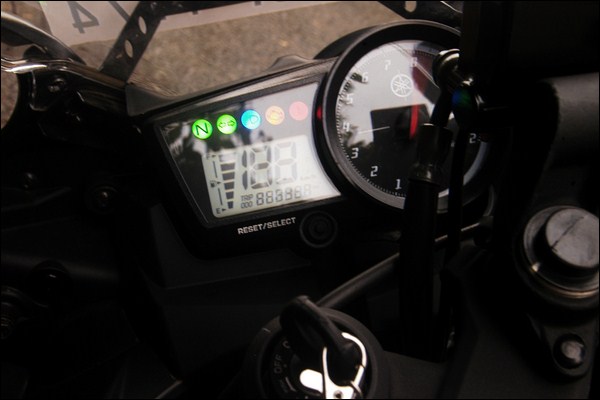 All round pick up is very good, provided you shift well. The dual headlights are very useful in the dark highways at night. In the looks department, I have nothing to say. Always pulls eyes, always people ask about the price and mileage as well! (It’s India, after all). Whatever shortcomings the first one had the version 2.0 makes up for it.

Firstly the rear tyre is great on track but unstable off roads or roads with pebbles. In India, depending on where you live this may be a problem. Shouldn’t be much of big deal if you live in a big city. Secondly, the power band from 4000 rpm. Some people say that the bike feels sluggish on 2000 rpm mark. I say if you shift right you can overcome most of it. But, yes there is a problem of power lower down. Go above 4000 for unleashing the little monster.

I have had one accident with my bike where a trashed the right side of the bike and the entire right cowls, footrest, and headlight plastic had to be replaced. It cost 3750, including everything. So repairs aren’t really very costly. The only problem is the parts. I found everything apart from the right main panel.

It actually took me 6 months to get them. (In the mean time I used the cracked one). The battery is really small and if you want to go for extra electrical accessories then you better watch it. You may fry the battery with Xenon headlamps.

Yamaha provided original accessories for the R15. Apart from that you get a lot of aftermarket stuff. If you have the taste and the budget you can seriously make your bike look unique.

Note: The Yamaha accessories are really hard to get in showrooms.

I wasn’t too happy about the lower power band and I decided to do something about it. The Daytona performance kit was a dream as it is very hard to get in a Yamaha showroom. I had the money from the business which was started for the bike itself. I decided to go the whole way and buy myself a Two brother’s vale exhaust system. You can see that in the first picture or the video posted below.

The boom is really loud. But that is not everything. Gear it up and it’s a different machine you are riding. The sound turns heads and your new found speed and pick up delight you. It’s almost like getting a new bike. Now the money I had to spend is considerable. You can get this from plannetdsg.com based in Pune. It’s worth it!

There was a time when I had to go to college every morning driving for over 40 kilometres. I always started from my home at 7:35 and reached before 8:00 am. I was never late, thanks to my beauty. In these early winter morning rides, I wore black leather jacket, black leather gloves, a balaclava and my red graphics helmet. I used studds then, now I have switched to an AGV. (Endorsed by Valentino Rossi).

In those trips I got to speeds at 134 km/h. Due to the loud boom of the exhaust cars would clear the right lane and let me pass when they saw me approaching. For one month I continued in this fashion and only once I was overtaken by BMW 5 series which was doing over 160!

Recently my bike turned 1 year old. Her birthday is 7th July. The relationship has been glitch free for the entire period she has been with me. Next year I might go for the big guns in an R6 when it’s launched. But I will not sell my true first bike, the one I bought with such difficulty. She is my sweetheart an icon of my youth and of my achievements.

PS: If you want to reach the high speeds with your R15, get an iridiam spark plug, a V.A.L.E. exhaust system, a K&N air filter. The Daytona sproket as well. Lean on your bike and shift at 7500 rpm. You will go over 150! Always ride safe, wear a full face imported helmet, and armoured jacket with gloves and boots. Happy riding!

Two brother’s exhaust R15 Video. I am there! With my loud bike!…