When it comes to booking a bike that performs top the best in the racetrack at an affordable price, you don’t have much of choice in India. You gotta choose one from the Yamaha YZF – R15 and the TVS Apache RTRs. (Honda CBR 250R is not taken into consideration in this category as it falls in the higher displacement range). 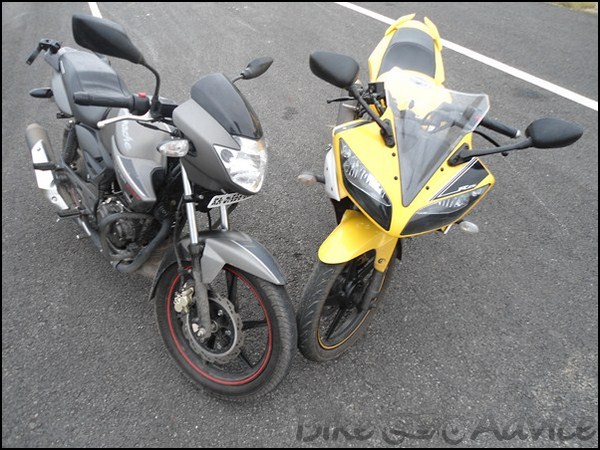 Known the fact that both these bikes are the best in tracks in various aspects, here we try to come up with a compare article on these bikes. They are compared under several categories and let’s see what is that we can conclude out of it. Note that only brief descriptions are given under each heading, thereby trying to make it crisp and clear. 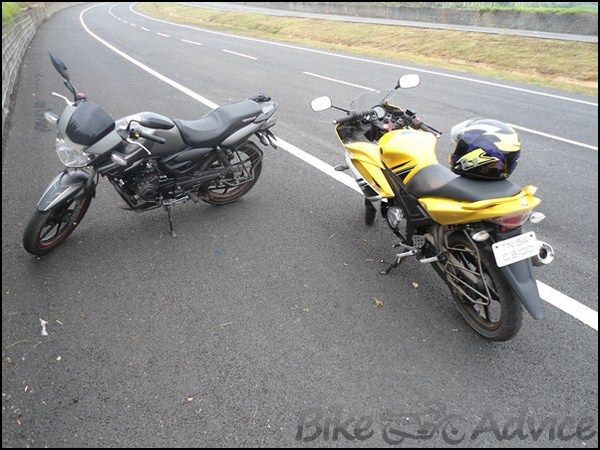 The R15 is clearly a true racing machine as it inherits the DNA of Yamaha’s R series of sport bikes. Yamaha’s close association with MotoGP has also helped this bike in adopting the delta frame design and the basic layout which matches the international bikes designed for the specific purpose of racing. It is also the costliest 150 cc bike available in Indian sub continent as on date. 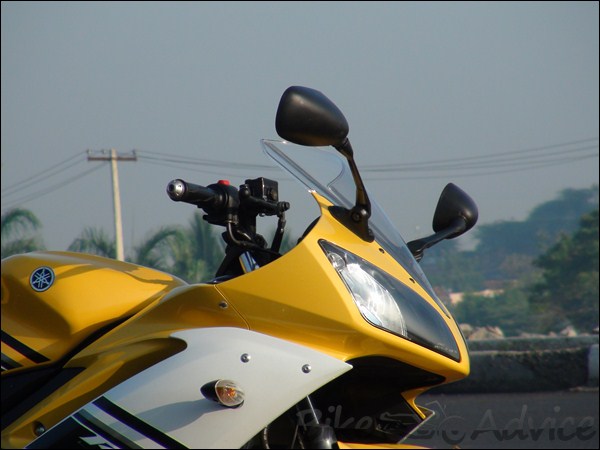 Coming to the Apache RTR Series of bikes, they are the brainchild of TVS Racing – the name that is synonymous with racing in the country for a long time, irrespective of the category under which they race. Many top racers out here in India are related to the TVS Racing is some way or the other. 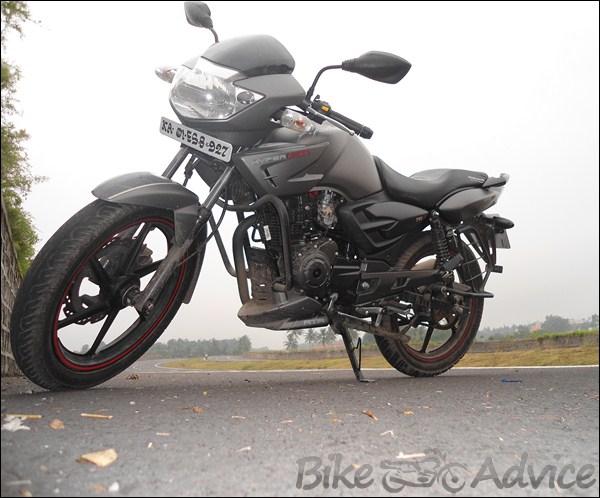 The specs of these bikes are not discussed much as we have had many ownership reviews and a lot of articles on these 2 bikes.

Let’s now get into the comparo of these racing machines

Let’s begin this comparo article with the styling factor. The Yamaha R15 in this factor is indeed a head turner. It scores heavily in terms of styling and looks. The layout of the bike is at par with all other R series of Yamaha machines – The top of the line models with R1 and R6. The side fairing of the YZF-R15 is the reason for its gorgeous looks and is the best of the best among the entire lot. Its twin headlamp cluster inspired from the rest of the R series of sport bikes gives it a perfect sport bike look and the style that it really deserves.  The sharp cut spilt grab rail is a cool compliment to this macho looking bike. The YZF – R15 is available in 5 cool colours. 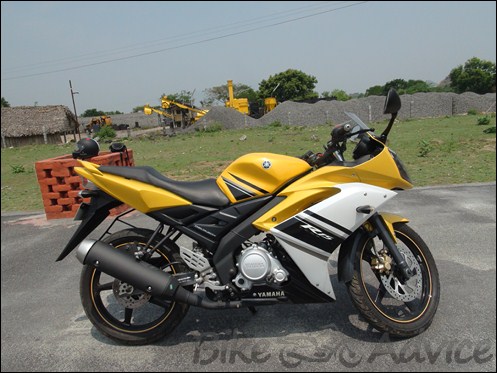 When it comes to the styling factor, the Apache is not a bike which scores less. The prime difference is that the Apache RTRs are not as macho with the side fairings. In a simple style factor, the Apache is equally good. The aerodynamic air scoop is the style quotient for this bike. The rear grab rail caters the purpose of adding a bit of beauty punch onto the rear part of the bike. The headlamp design is simple and cool. One of the factors that aided this model along the path of success is the wide range of colours the company offer. I am personally impressed with the white colour Apache RTR. It’s really amazing in the colour peace and purity. Not only did this colour suit it best, but so did the yellow, grey, black, red and even the orange colour scheme. The matte grey is another special colour on this beauty. 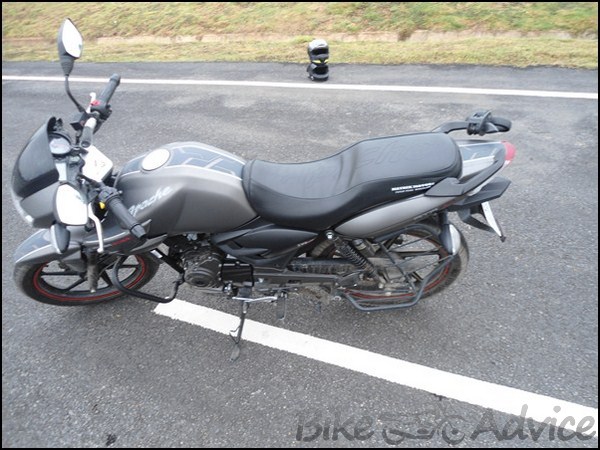 The R15 houses a perfect race seating position when compared with the Apache. The perfect lean forward position is highly ideal for comfortable long drives too. Outta my experience, R15 is one bike which has not irritated me (and the other riders too) with back aches when you travel for a few hundred kms at one shot. In the race track, when you take position, you get entirely covered into the front fairing of the bike, thereby increasing the aerodynamics at high speeds. There is one fact here which many bikers would not have noticed. There is a Yamaha logo on the petrol tank which will never get hidden in whatever postures you ride the bike. That’s the way Yamaha has designed it. That’s just brilliant! 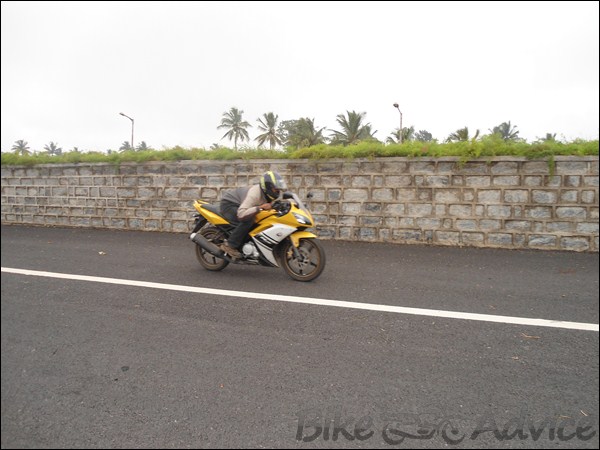 The Apache RTR 160 Hyper Edge, though doesn’t possess a seating position as good as R15, it is still good to race. It suits for racing purposes, but when it comes to highway cruises, it is not as comfortable as the others in the category, especially for guys who are a little tall. There is a common complaint among Apache users that the riding position creates minimal back ache when taken for a few hundred miles. Whatever it is, to a certain extent it is a track ready bike, I would say. But cornering along the curves is the greatest advantage attained because of its riding position. 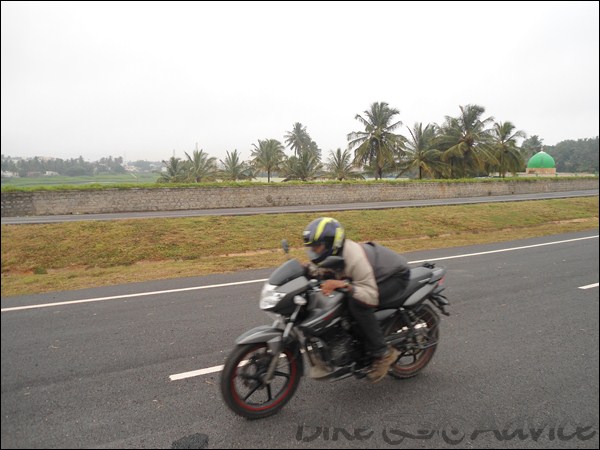 The R15 sports discs at front as well as at the rear. There is only one variant of YZF – R15 just like any other Yamahas. They are capable of aiding the rider with best of the braking experience. Precise braking is what the R15 delivers at times of emergency and situations demanding the same. As on date, there is no ABS variant available in R15. But, if you still are determined on owning a R15 with ABS, you gotta wait patiently till January 2012. That’s the time of Delhi Auto Expo where the next generation R15 will be revealed and that will house ABS as on optional feature (of course not standard, for they are not BMW Motorrads!).

Apache RTR has only Hyper Edge presently in the 160 cc category. It comes with single disc and there is also a variant with discs on both the front and the rear. The one we tested was the single disc variant.  But the brakes in the Apache are never an issue worth concern. But the prime advantage what this bike possess over its rival here is that it is the first Indian bike to sport an ABS. If you are damn determined that you wanna go for a sport bike with the safety feature of ABS fitted on to it, then the Apache is THE bike for you without giving you any other option in this price band and of course, with no second thought. 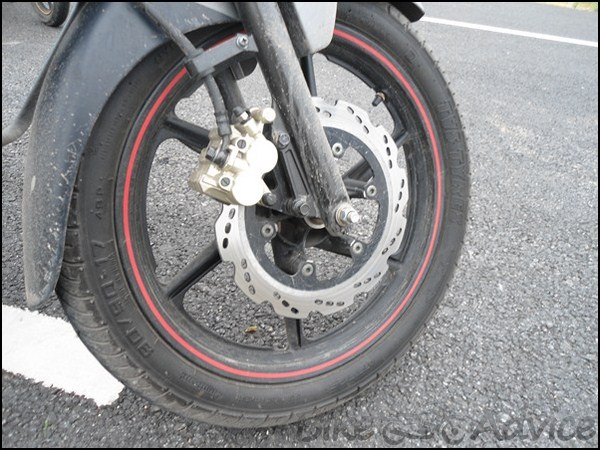 The Yamaha R15, is undoubtedly known for its breath-stopping performance. A speed of 120 to 125 kmph is absolutely a cakewalk for this machine. It is capable of cornering great on tracks owing to its delta box frame inspired from the MotoGP bikes. The ride quality is very smooth and the best part is that no vibrations are observed either at low RPM range, or at higher RPMs.  The riding position is an additional advantage of this bike, when she is put for a test on the tracks. Despite the fact that it houses a big and a gorgeous side fairing, it weighs less that the RTR. The kerb weight of the R15 is 131 kg. 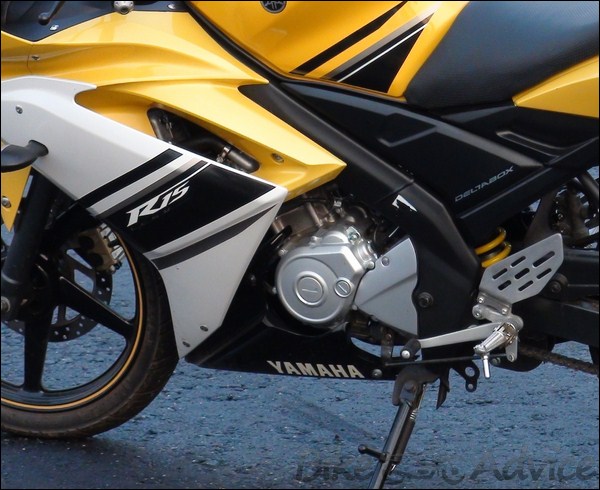 Apache, of course is a cool bike to be handles in track owing to its small dimensions. The cornering is really cool with her, but the ride quality is not as good as the R15. Vibrations are observed at higher RPMs. The bike handles good till a speed of 110 kmph and then goes a little scary by making the rider lose the confidence over the machine. The vibration issue though is not observed in the higher version, the RTR 180, is an issue here (in the RTR 160) and has to be rectified. We hope the company really takes care of this problem which can be eradicated totally. This bike is 5 kgs heavier than the R15 with a kerb weight of 136 kg. 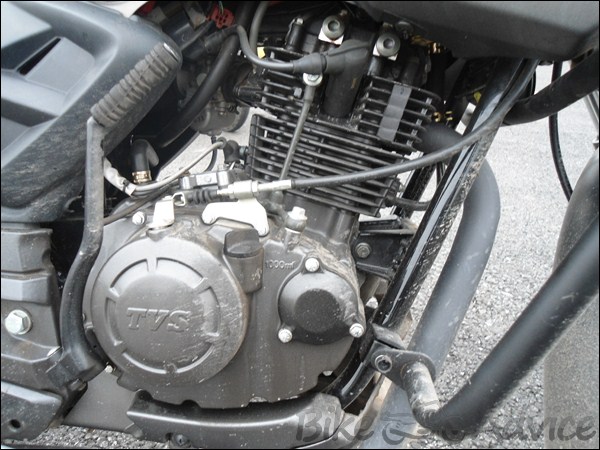 The tyres are an essential component when it comes to using a bike in the track. The front tyre of the R15 bears the dimension of 80/90 and is fine for the front part to take care of braking. The rear tyres are of the dimension 100/80 and needs to be a little wider. The road grip of the rear tyre is not very great. I really wish the next generation R15 houses a wider tyre so as to take care of the issue of road grip. However there is no problem with the tyre when used off the track in the city roads or in the highways. 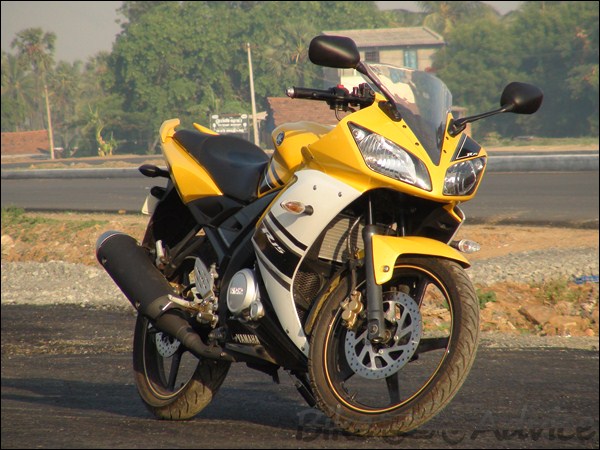 When it comes to the tyres of the Apache RTR 160 Hyper Edge, the front tyre’s dimension is 90/90 which is comparatively better than the R15’s. The rear tyre’s dimension is the same as the rival’s but offers a decent road grip owing to the small dimension of the bike. It is 100/80 and there are absolutely no complaints on it. 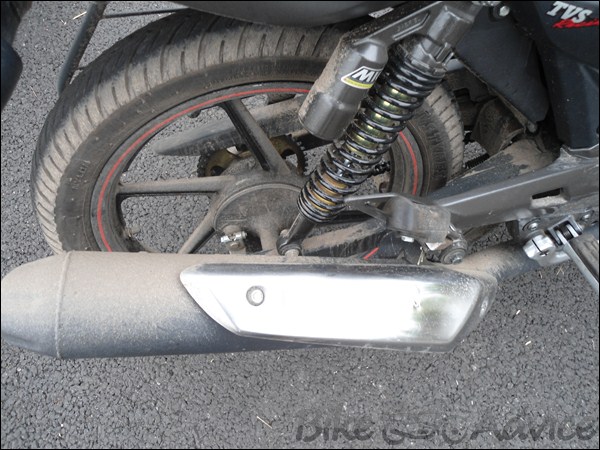 The R15 boasts a 6 speed transmission which is ideal for a track bike. The gear shift quality is at par with all Yamahas but the typical problem of getting stuck with the Neutral when you upshift from the 1st gear to the 2nd. Above all, a lag is observed when the bike is ridden in the 5th gear. She is fine when she is ridden in 4th and 6th. The problem is only with the 5th gear. 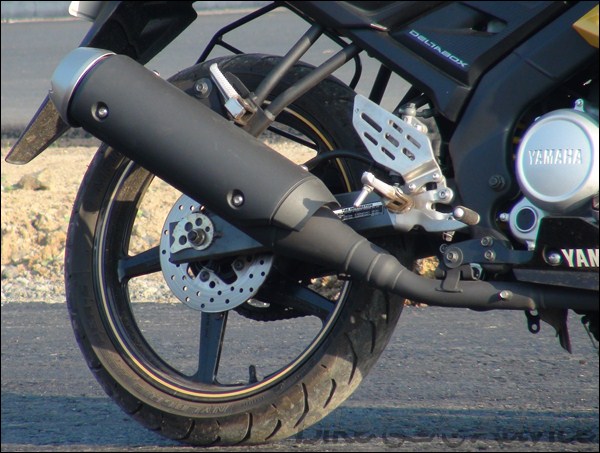 This is where Apache scores a lot when compared with the R15. The gear shift quality is similar to a knife pierced into butter. Never did I face the problem of the gear lever touching the neutral during gear shifts. Kudos to TVS for coming up with such a perfect transmission. 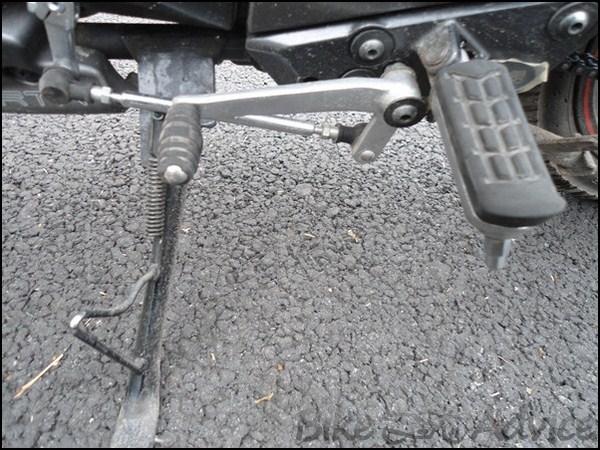 The R15 is a perfectly track ready bike. The bike houses no main stand, which has to be removed once you get into the track. Also, the mirrors on both the sides can be removed despite the fact that every mirror has 6 screws to it. 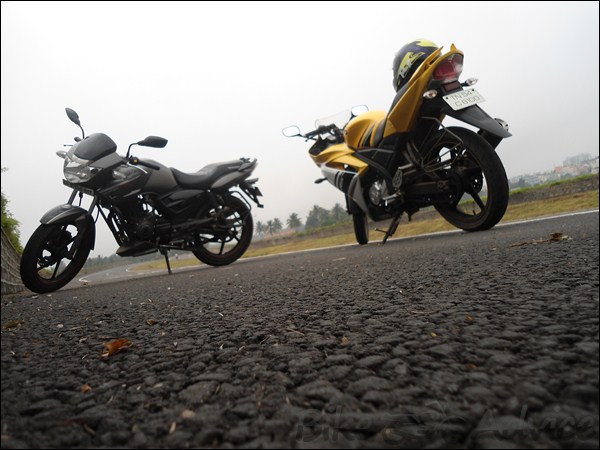 There are many aftermarket kits and components available for the YZF – R15. The Dagrex kit is capable of boosting the performance of the bike to a larger extent. With the installation of Dagrex kit, the bike becomes capable of crossing 150 kmph mark, which is unbelievable for a 150 cc bike. The best part here is that this brand of rave kit is offered in India by the company itself. Of course, it is an extra weight in your wallet. A full kit would cost you nearly 50,000 bucks. Apart from this part, many other brands like Performance Tuning and a lot more are available.

When it comes to Apache, there is not any such reputed brand offering similar kits. A small suggestion here is that TVS can start considering the idea of coming up with such performance boosting kits. This can be made possible with the assistance of the prestigious TVS Racing.

Overall, both these machines are good is some aspect or the other. R15 is not an easily affordable bike by all to experience the Racing Instinct. With a price tag of INR 1.12 lakh (On The Road, Bangalore) and a fuel economy comparatively lower than the Apache, it is not the bike for all. But, still if you really wanna unleash the racer within you and you are in need of a bike which would bring him out, then the Yamaha YZF – R15 is the only bike in the 150 cc category which is really capable of doing it.

One great option that has to be mentioned here is the Radium coated Key hole which enables to see the slot even in darkness. This makes the Apache a utility based bike too. The Apache RTR 160 Hyper-Edge is an amazing value for money bike. With a price tag of INR 75,000 (On The Road, Bangalore), it is indeed capable of unleashing the Racing DNA. If you wanna own a bike which can perform to its fullest in the track without burning a hole in your pocket, the Apache RTR 160 is the Saviour for you.