Hey bikers, this is Rohan Menon from Malad, Mumbai! Im an avid reader of Bikeadvice and this website has helped me a lot in choosing my first bike! Its time I give something back to the site! What better way than to write a review for my bike which recently completed 8 months with me! A Midnight Black Yamaha yzf-r15! 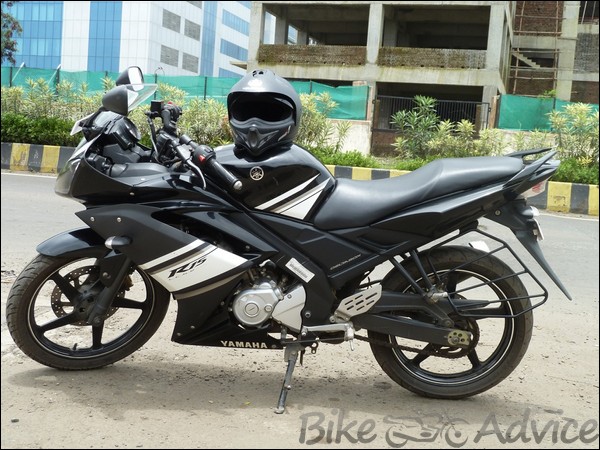 I bought it at a price of 1 lakh 12 thousand INR which was the on-road price for the same! This is my first bike and I have hit it right on the money the very first time! You guys don’t realize what an awesome machine she is! Owners of this machine will know what I’m talking about! I Bought this beauty on 9th of june, 2011. And ever since its been a dream, a roller coaster of a ride!

P.S. I Have Not Included Bikes Like KTM Duke 200, Honda CBR 150R, Hyosung Gt 250R, Pulsar 200 NS, Yamaha R15 Version 2.0 for comparison because 8 months back when I had bought this bike these bikes weren’t there in the indian market nor was there talk about these bikes.

My passion for biking started when I was a kid and when wearing helmets wasn’t necessary. It was the age of 2 strokers and my uncle owned a Yamaha RX-100 (a legend). And I rediscovered my passion for biking 2 years back when I sat behind my friend on his Yamaha fazer! (I See Myself Having A Strong Attraction To The Yamaha Company…..lol).

Anyways its been 8 months now and 8000 kilometers on the odometer and every single kilometer has been a joy! I Did intensive research on the net, test drove a lot of bikes viz.… Karizma ZMR, Pulsar 220, Avenger 220, Apache RTR 180 (Abs), Fazer, fz, Karizma R etc! Then came the time when I had to shortlist bikes and zero in on one bike that I would own.

The cost wasn’t an issue. My parents had told me that whatever bike I choose. I had to make sure that it lasted for a long time and something that didn’t have a lot of maintenance issues with! I decided my dream bike on the basis of the following points that I have mentioned in the review. 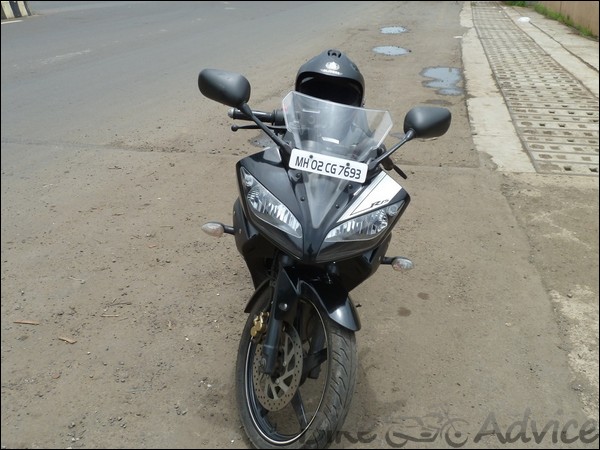 It is easily the best looking bike in the country. The bike rear doesn’t look as good as its front and few people might raise their eyebrows but when you stand at a signal and people stare at your bike, you know you have made the right choice.

The Options I Had When I Bought This Beauty

Karizma ZMR: This bike looks decent but it lacks that sporty look and its really huge and bulky, So it would be a big problem maneuvering it in traffic. And it didn’t have enough power I thought to move the bulky thing as fast as I liked. It is a great tourer though but I wasn’t looking for a tourer.

Apache RTR 180: I had a problem with the brand TVS. I was really unsure about its service and moreover I found very few showrooms of the same in my area.

Pulsar 220: First of all this thing is really bulky, not as bulky as the ZMR but still pretty heavy in comparison to the YZF-15! I was impressed with the raw power that it had (21 bhp) but then again it did not have eye catching looks and Pulsars are really common. I did not want to be one amongst the many Pulsars out on the road! (Egoistic pulsar fans are going to lash out at me for this) Its a really common bike! Also a lot of my friends weren’t happy with the Pulsars they owned for the rattling sound of their chains and for its cornering disabilities, servicing woes and cheap quality of parts used by Bajaj!

Honda CBR 250R: Awesome bike but the waiting period was 6 months and I really couldn’t wait that long!

Royal Enfield Thunderbird Twinspark 350: Again I was unsure about the service. I must add here that I was greatly impressed with its looks! But I have heard stories about the shoddy service of enfield! And I’m not really a big fan of enfield’s. I rather love sports bike more. Guess my liking for enfield’s will come with age.

Technology Used In This Beauty 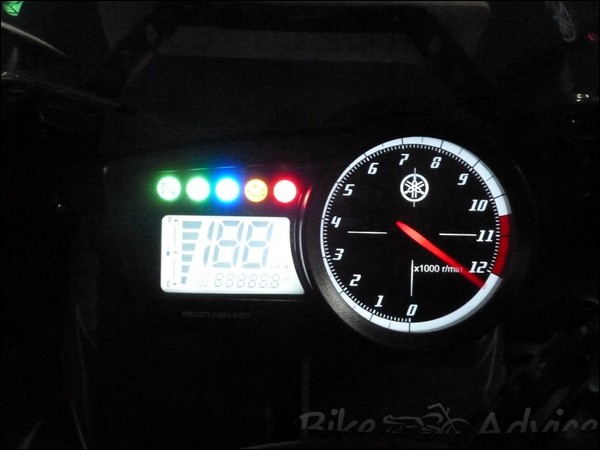 This has been Yamaha’s fortress for the last 40 years and it has been safeguarding it very well! This bike is light, it only weighs a 131 kgs. I got a top speed of 150 On The Western Express Highway, Mumbai and 147 On The Mumbai-Pune Expressway! (Yes, You Heard It Right…150 Km/Hr).

Once you cross 6k rpm on the tachometer, she starts roaring and that sound is probably most pleasing to a bikers ears and the best part is that at speeds even in excess of 140km/hr one never feels any sort of vibrations or any dip in confidence. It feels and handles like magic even at high speeds like that.

In city conditions too this bike handles very well. Cornering and maneuvering through traffic is very easy. Although on pot-holed roads the suspension doesn’t work as well. But this bike was designed for the race tracks and it does a supremely good job on the highways and empty roads and it is also pretty decent in city condition.

Mileage is also an important criteria and if you maintain your bike as given in the service manual, it should give you 35-38 kmpl (city conditions) And 40-45 (highway conditions). I have been riding it for 8000 kilometers now and it still is giving me a steady mileage of 35+ kmpl. I rode it on the mumbai-pune expressway and for 8 hours non stop and not once did the engine show signs of over heating!

This shows that the liquid cooled engine is very efficient and it does a great job in cooling the engine. The ghats of lonavala were fun to climb too on the yammie with the delta box frame and the light di-asil cylinder. A special mention to the handling of this beauty as all you bikers would know by now! Its top notch and is creating its niche in terms of handling efficiency.

Some of my friends have changed their stock air filters with K&N air filters and are regretting it. It sounds like an unserviced auto rickshaw to me and they have to take it to the mechanics more often. Also the K&N is made to filter out excessive dirt in dusty conditions and mumbai isn’t that dusty I think.
There is also no change in performance. Moreover I think the stock filters do a pretty good job and I haven’t found the need to change it to a K&N. Also the Yamaha service centre guy refuse to touch your bike if they see that you have replaced your air filter. I would say “stick to the original”. 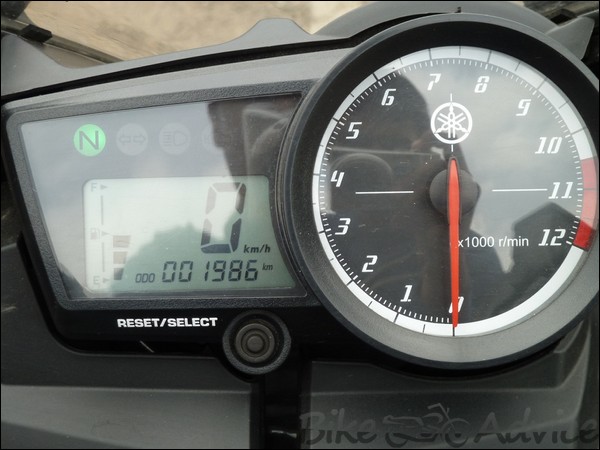 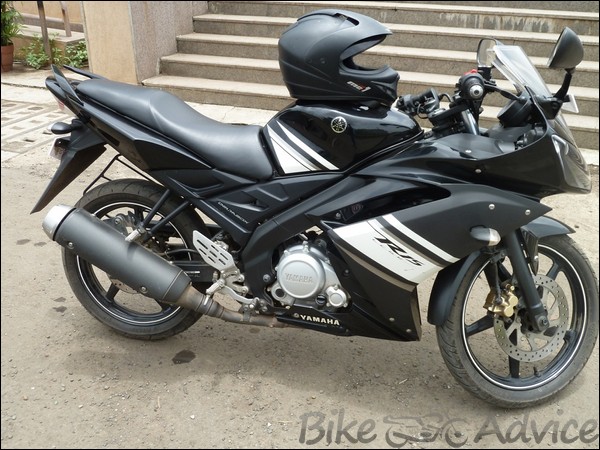 This is another area Yamaha should concentrate on! Yamaha service can be so much better! The guys at the service centre don’t even inform you if your bike is ready and they won’t let you to have a look at how the servicing is being performed! They just dump your bike in any corner they find empty once the servicing is done. The mechanics are pretty rude too!

I see people fighting with their mechanics for not doing the job properly! I have been lucky on this front. Thankfully nothing drastic happened with me and my bike during servicing. And this is the condition of the factory outlet of Yamaha (I.F.S.) at malad, wonder whats happening at the other centers!

You get 6 free services in a year. This is a maintenance free bike. Just need to pay for the engine oil (475 Rs) and occasionally air filter cleaning and oil cooler changing which is hardly 150rs. You also need to change the front and rear disc pads after an interval of 6-8 months depending on your riding style. I needed to change mine after 7 months. The front disc pad costs 475rs and the rear disc pad costs 650rs. 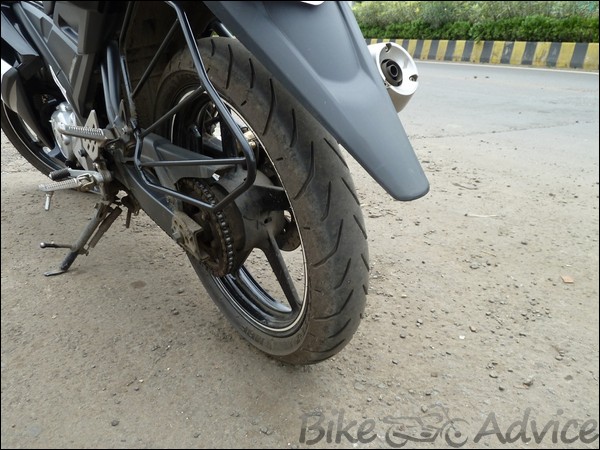 The labour charge for the same is 150rs. I’m not the guys who would shy away from servicing his beauty. If you drive sensibly the cost of each service shouldn’t go beyond 700 rs. And it is sensible to buy motul chain lube which costs 480rs for a bottle which will last you at least 4-5 good sprays after each service. Its better than giving the service centre guys 200 bucks for one spray!

The best thing Yamaha offered me is an extended 3 years warranty for just 777Rs which covers the engine, fuel injector, electrical system and air induction system. The extended warranty also offers 20 free services (6 free services + 14 paid services). I think its a great deal and so I have not made any modifications on the bike and have been performing timely service on this beauty. Once the warranty is over I’l either go for daytona mods or joel joseph’s modification (race concepts). Its almost become a itch to make it even faster but the warranty thing is holding me tight! 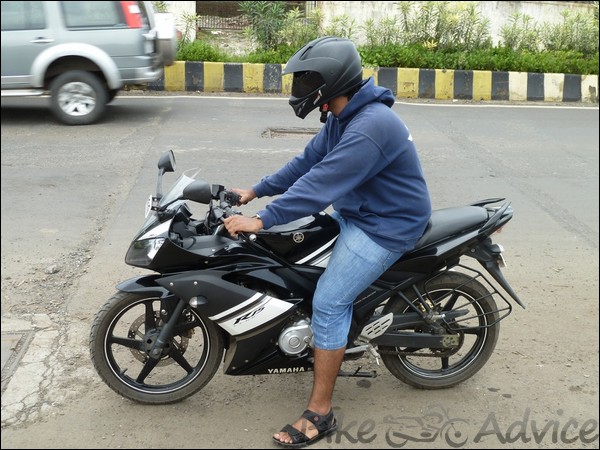 This is one area a lot of bike gurus will open their “experienced” mouths and try to convince you not to go for this one! Take this advice, the riding position is not bad infact its sporty and gives you the feel of riding the bike. It can be tiring if you sit on it for a long time but then all bikes will have that problem. But big ass or small ass this thing is not uncomfortable not for the rider not for the pillion (unless you go touring for more than 8 hours non stop).

Bike gurus will argue about the tyres not being broad enough! Don’t listen to those idiots. It has been specially designed for the r15 by MRF! And Yamaha guys aren’t stupid, they know how to design a bike and the tires offer superior road grip. Changing it with fz or Pulsar 220 tires will only drop your mileage and you may even have to compromise with the finesse of its handling.

Also I have ridden it in the heavy rains of mumbai and I have not skid even once nor have I ever felt uncomfortable because of the tyres being puny. Instead I would owe the great handling of this beauty somewhat to the small but efficient tyres. Although I must add here that replacing it with broad tyres makes the rear part of the bike look better. 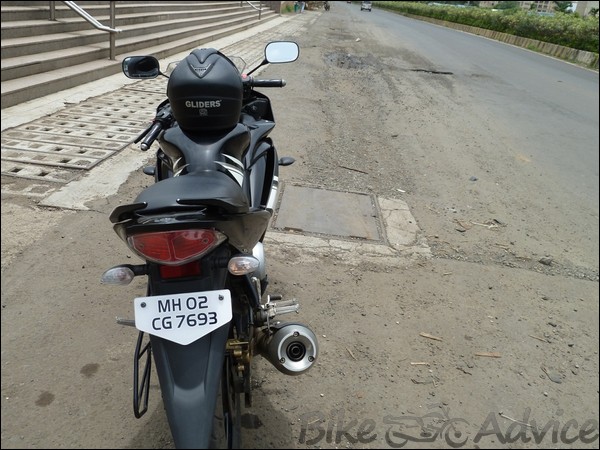 But some of my friends have replaced their stock tyres with pirellis and the tyres of Fazer and they say that they have seen a marked drop in the mileage and handling. So its not a good deal to replace your stock tyres to a bigger sized ones and lose out on the wonderful things this bike has to offer.

Replacing your stock headlights with HID’s (High Intensity Discharge Lights) will only drain your bikes battery. The stock headlights do a fairly decent job. I have ridden this beauty at night for long hours and I did not ever feel the need for a H.I.D or white lights at any point of time.

Imagine having a H.I.D on your bike and then your on an isolated road and because of your H.I.D the battery of the bike drains out and you can’t start the bike. Its a scary thing to even imagine because this bike doesn’t have a kick start, so then you will be stranded with this beauty plus H.I.D’s at the isolated place. “Keep it original…..keep it simple”

What makes Yamaha R15 stand out and beat its competitors?