I was in 5th std. when I saw Dhoom. As I was BIG fan of John Abraham, I loved his every role, but in Dhoom he really made everyone love him. I was fascinated towards his role and as well as with his bikes. Although, I thought that stunts were performed by him, I came to know at a later stage that stunts are never performed by actors. At that time I was in love with sports bikes as its appearance charged me and John was the addition such as a cherry on top of ice cream. 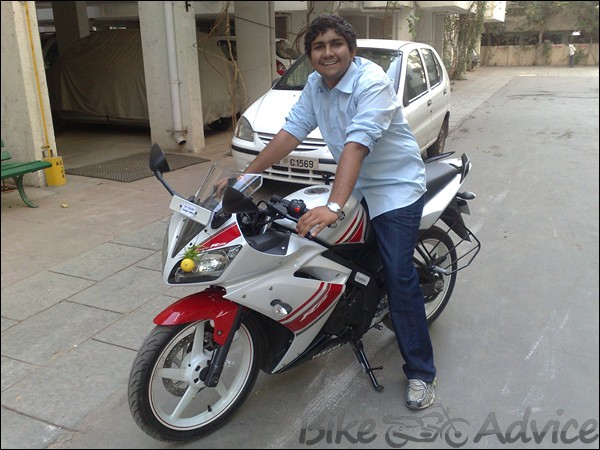 I was in 9th Standard when I first saw R15 red in color at a place called Hanumangarh situated in Rajasthan. The city was small so even the small thing seemed to be exaggerated. The Bike went into my mind and led me to think of it anytime whether it was day or night.

When I entered my 10th standard I saw many of my friends riding bikes after school but I was only provided with a 100cc Pleasure for my pleasure. I was not ashamed. But I always wanted to ride a bike.

Day by Day my hunger for a bike increased. Then my Dad got transfered to Ahmedabad and I came here (at Ahmedabad) after finishing my 10th standard. As being a huge city BIG things seemed to be small here. My life and angle of examining things completely changed.

When I saw Pulsar 180 for the first time, I thought how fortunate that guy is who got to ride that bike. I asked my father to buy me a P180 but he didn’t answer affirmatively as it was too early to buy a bike for me and I had my two years of school before college. I understood the matter from my parent’s point of view and didn’t speak to them for it about 1 and a half years.

In this 1 and a half years my demand raised from P180 to P220. Then, I saw FZ-16 and thought that I would be luckiest guy to buy that bike. I also found R15 attractive but I knew that it was out of my range so never bothered to think of having one. It was about 6 months back that I was sitting with my father and asked him: “Kya yaar papa ji, ek bike bhi nahin dila sakte”. 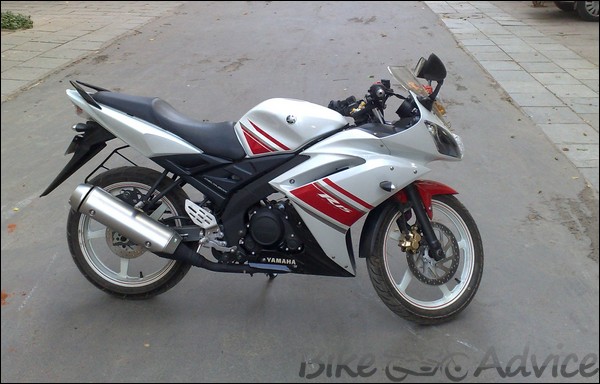 My father told me toh jo bike bolega I would buy it for u just wait for right time, and I chose it as right tome to ask for R15. He said we will look for that one. He know that I priced a bit higher than others. But I told him that we have to buy bike only once not again and again. At the time of final decision I was confused to choose between Karizma ZMR and R15. I was loaded with infinite thoughts and I checked each and every site possible to get a contrast between the two bikes.

At last I found this BikeAdvice. It has changed my life completely. I convinced my father to buy me an R15 but he was in favor of Karizma ZMR. I told him that we would test ride both and then decide.

It was late evening when me and my parents went to look for bikes. We went to Hero Honda show room first but it was getting renovated therefore they just showed us a used bike which came for service. I was disappointed. Then they recommended us to visit a nearby Hero Honda showroom where Karizma ZMR would be available for test ride. We went there but got the negative reply. 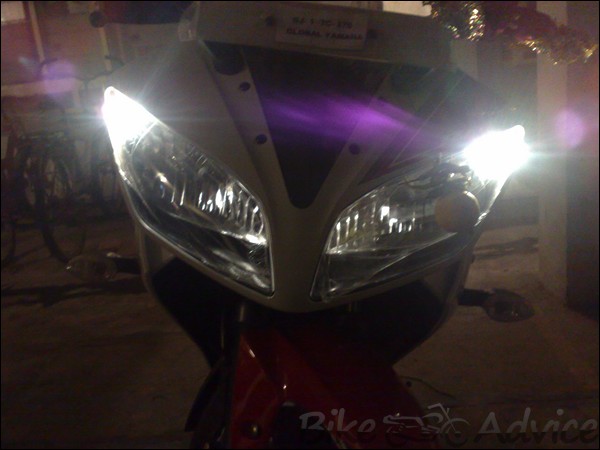 Then wandering here there my father told me to check out Royal Enfield too as it would suit my personality. We went to showroom but before entering the showroom I saw an R15 in the nearby building. The showroom was closed and the boards were not lit up.

I inquired about it from the workers nearby who told me that showroom is going to be inaugurated day after tomorrow and I can meet officials upstairs. I ran up the stairs and I saw a white R15 on display. I felt like I have entered heaven. I asked one of the officials whether it was available for sale. He answered yes and I was like out of my senses for a time being. 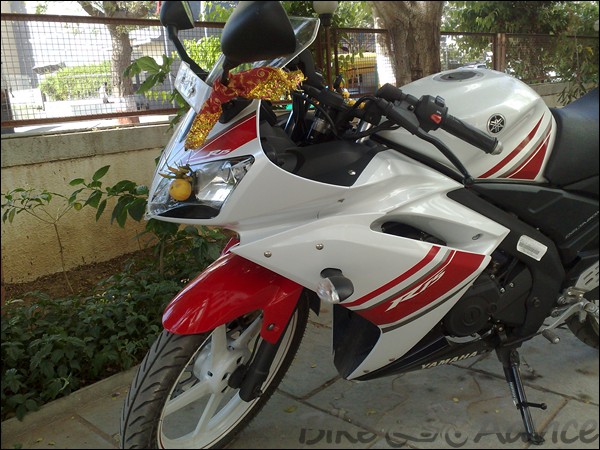 Than I called my parents upstairs and they talked to them while I was checking out the bike. They refused for the test ride as it was late and told that as their showroom is new they have got 4 Limited Edition R15 out which 3 are booked and only 1 is left. But my father told that we can’t book it right now as we need the test ride first and also have to check Karizma ZMR.

I was highgly disappointed and was in fear of losing the white R15 as no one other than R15 owners or lovers would know the value of a Limited Edition R15. But next day I went with my father to the same showroom and got the test ride. My father asked me whether I wanted to check Karizma ZMR but R15 lovers or owners would know that no bike seems to stand boldly in front of R15. I replied in no and my father asked whether we should book it. 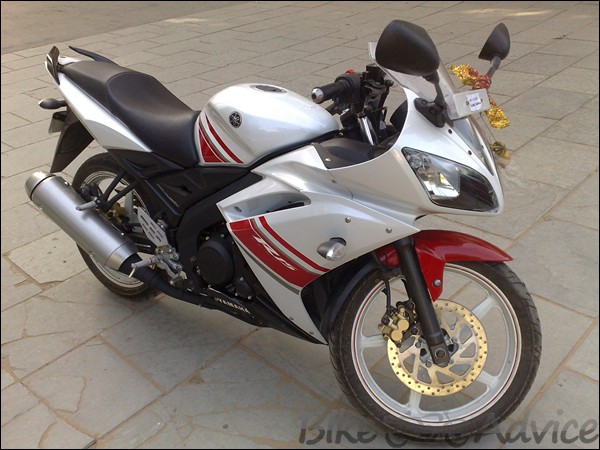 I bought the money from nearby ATM and booked the white R15. As we completed the booking two boys came to inquire about white R15 but they were refused and told to wait for next lot. I was in a hurry to get the bike that I told my father to withdraw cash and give money to them and bring my R15 home. Next day we were invited for the inaugural ceremony and I was handed over a big key from some official from Japan of Yamaha.

But the showroom owners refused to deliver my bike as it wasn’t ready and they were busy with the delegates from Japan. They told me that they would call us after 2 or 3 hrs and we can come then to receive my bike. Believe me guys, those 3 hours were like 3 life times for me.

Because waiting after coming so close to your dream is what not everybody’s cup of tea and especially mine. We got the call from show room at 2:15 and we reached there at 2:45. I rode white R15 brand new from show room to my home. I was so happy that I can’t express it in words. We did some rituals with the bike and it was ready to be flown off. 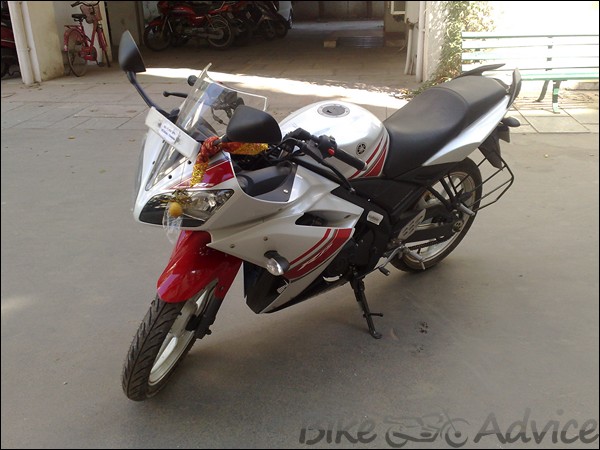 Today, when I ride my bike, I get noticed by everyone who passes by me and I ride slow so that everyone gets the chance to have a complete look at bike. Complete bike runs on sensors. And I would not go into technicalities as everything about bike is said before and would be known to any R15 lover and the one who doesn’t know is not in true love with the bike.

I have rode my bike for 191 kms in 7 days and still the thrill you get after sitting on bike is such that the bike has just come out of the showroom. And I must tell that it accelerates like anything. I love my bike and will continue to do so.