The review that you have been waiting for has finally arrived. Yamaha MT01 which has Torque like a hammer as Yamaha calls it, is one of the bikes with the biggest engine in India as of now. The following review has been written by my friend from Delhi who has recently bought this bike. My sincere thanks to him for taking the time out to share his opinions and pictures of his bike with us. He has chosen to remain anonymous, but he will answer any queries you have about this bike. Just leave your questions in the comments below the post. – Deepak 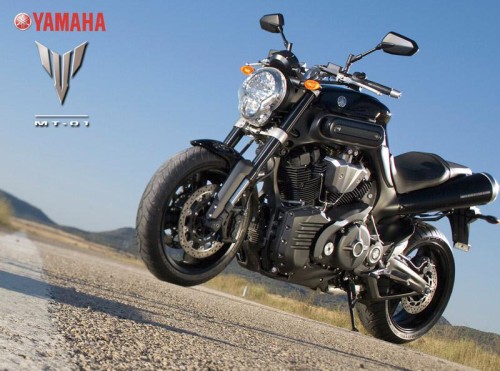 Yamaha Super Bike MT01’s delievery after I booked was awaited with both bated breath & super charged excitement! It took three days for me to get hold of my very own super cruiser bike! The first look was filled with mixed emotions. The net effect rivets your attention before your butt even touches the seat and you take in the pleasingly simple instrumentation: a big round tach wrapped around the digital speedo and warning lights.

The bike’s initials don’t stand for anything in particular, but Massive Torque sounds appropriate enough to me. It churns out loads of attitude even before the tach needle has moved from its stop. The moment Engine started for the first time its sound & looks were like a large, powerful outboard motor, spitting farting and gargling The Thumping sound ! The size is huge. Until you get on its comfy seat. It has fantastic brakes I realised it the moment I sat & drove for a short distance ! It handles like a sportsbike and doesn’t weave around high speed sweepers even with the throttle pinned to the stop. Though the back does wants for a rear end support for longer rides. People around were pointing and staring when you accelerate. If you roll off the throttle they get blown over by the back-blast. 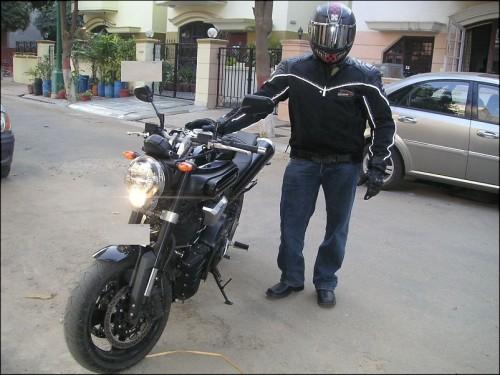 On the outside, the MT-01’s 1670cc air-cooled twin engine is powered by a huge, slow-revving push-rod. It’s big, lumpy, massively torquey sounds absolutely awesome. Its aggressively set up as an outrageously styled rocket. Its got radial brakes, exhausts that look like rocket launchers and a riding position that means your bum will last far longer than your shoulders, neck or driving licence. They gave it a headlight that could be considered to be aesthetically challenged but which works magnificently & somehow resenbles shape of Skull minus the boney cross! Its got big clear mirrors, the supplied horn is not as loud as the engine but looks like something off a moped and attitude that gets you pulled everywhere

Standard glance on to the bike itself – The MT01 is completely dominated by the engine. Both visually and structurally. And the riding experience is the same. The 1670cc vee twin is simply astonishing to look at and to use. It’s enormous, of course, but manages to keep most of the necessary external stuff as small and compact as possible. So the air filter doesn’t get in the way, the injection is tucked up inside the vee and things like the alternator and starter are all out of the way.

The rolling chassis is surprisingly conventional. Predictably massive fully adjustable upside down forks at the front are mated to an enormous extruded alloy frame with one of the biggest braced swingarms I’ve ever seen. A slight departure from convention sees the rear shock laid flat under the back of the gearbox instead of above the rear cylinder but the logic of heat dispersal and sheer height makes this positioning sensible. Adjusters are easy to reach too, though I would imagine they would soon get covered in road filth. 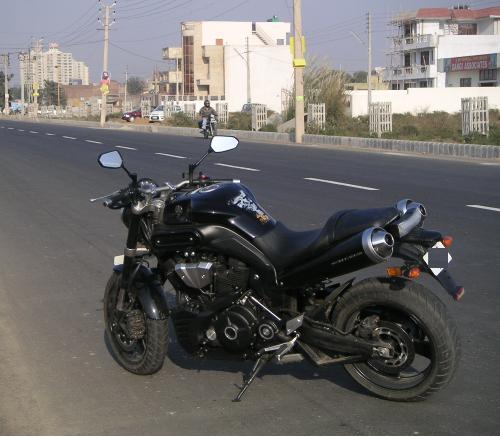 It’ll be no surprise to know that the engine makes its presence felt very clearly, even at tickover, massive pulses of raw power juddering the frame and rider. The effect isn’t unpleasant or even disturbing, but it’s very much there and you’re very aware of it. The clutch is light and sensitive and the gearbox, though noisy when shifted to first gear from static, is slick enough. Pulling away is fuss free, as you’d expect with a grillion pounds of torque, and the 270kilos of the bike vanishes instantly, leaving something with very neutral geometry and nice wide bars giving stacks of leverage. Once moving properly the bike, though heavy, changes direction easily and responds happily to pressure through the pegs. It’s rock stable.

As the pace ups a number of things become obvious. The MT-01 is extremely well sorted generally, the brakes are brilliant as told earlier. Open roads are a breeze, with the bike capable of cruising effortlessly at whatever speed your neck muscles are comfortable with. Overtakes, when they arise, are dispatched with no more effort than brushing a fly from your cheek. Whatever the gear, a brief handful will see your target demolished and spat out behind you in no time at all. 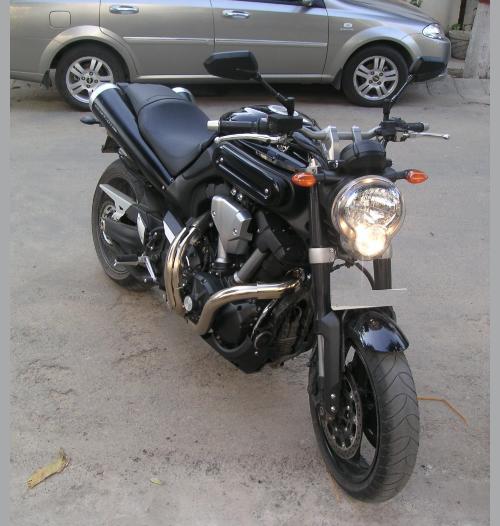 Aside from the fact that not enough people will see you – that’s important – the total lack of protection means that the experience will be rather less enjoyable than it should be.

In town the MT-01 acquits itself well. It’s narrow enough to filter through traffic without too much trouble, quick enough to demolish anything else off the lights should that be an issue and big & brash enough to get noticed. Indeed, getting noticed was something that happened a lot. At every Traffic signal where I required to stop for RED signal I was swarmed by other bikers more than just keen to know more about the bike, its power, its price & most important its top speed! I feel that most bikers are more than interested in testing the bikes top speed when ever possible. The ordeal of moobing gets over the moment light turns green & you throlle away & vanish around the next nook or corner!

Overall I thoroughly enjoyed experinence of owning the MT-01. Even after a couple of little moments I remained confident in the handling and brakes. Performance is as astonishing as you’d expect from an engine like that and there’s loads more available with kits ranging from the mild (slightly freer exhaust and ECU) to the wild (cams, exhaust, clutch, ECU etc) offering power hikes of over 30% and enough torque to bumpstart even an aircraft carrier 🙂 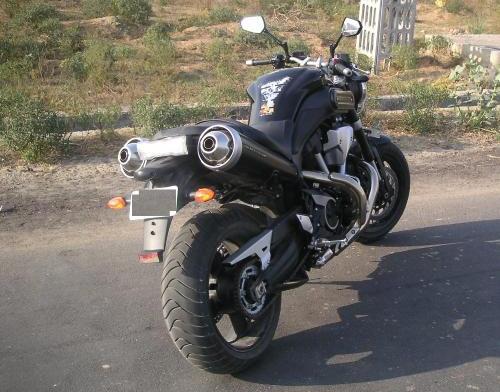 On more personal note, The bike exhuberates sense of power & aura of command on road. When I throttle my way on roads mostly users around give way out of curosity & as a sense of respect to the power mill running midst them. As such super bikes are not a very common site in Delhi & that too MT01’s are not seen at all; the unusual curious looks in passerby’s eyes are quite evident.

User safety: one can always order wind screens to make riding over 100kmph speeds more favorable for riders. Also the tank pads helps eliminate the chances of getting your brand new tank scratched from your belt buckkle. Slider when added to left & right side of machine will help it minimalise the damage in case you drop the bike on either sides on slow of stationary speeds lets us say while parking or turning etc at low speeds.

The bike is exceptionally comfortable when running but becomes the heaviest machine when have to handle or park manually. It is very risky to take U turns without being concious of the need of  balancing 270kilos on your single leg. It looks are certainly million dollars and sounds like nothing else on this earth.