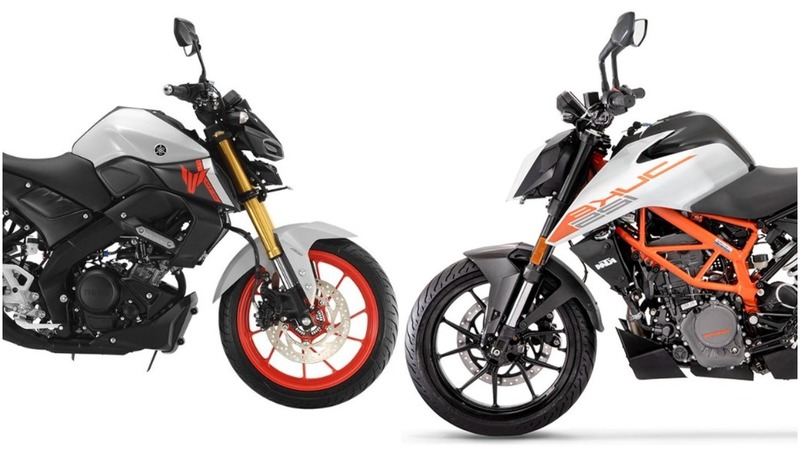 Today, we are putting two of the direct competitors in the performance naked motorcycle segment – The MT-15 v2 and the KTM 125 Duke.

Let’s have a look:

It is very clear that the Yamaha MT-15 v2 is more powerful than the KTM 125 Duke as the former has a bigger engine which produces higher performance numbers.

Interestingly, the difference is not that much. The Yamaha only makes 3.4 HP of power and 1.9 Nm of torque more than the KTM.

In other categories, both the rivals are very similar to each other.

Both the naked competitors possess performance and sportiness in their DNA. While the MT-15 is the naked version of Yamaha’s supersport machine, the 125 Duke is the smallest sibling of KTM’s monstrous 1290 Super Duke.

Both the bikes sport their respective company’s best chassis elements which includes the frame and the suspension setup.

One aspect where the MT-15 has the clear advantage is the ground clearance. The Yamaha rides 15 mm higher than the KTM.

In the dimension category, the MT-15 is the clear winner. It has a shorter wheelbase, weighs less and has a shorter seat height compared to the KTM.

Having a shorter wheelbase combined with lighter weight will definitely give an edge to the MT-15 in terms of handling and agility department.

A lower seat height will also facilitate a wide range of riders with varied stature.

Both the rivals are running on 17” alloys at both the ends. However, the rear tyre of the KTM is wider which will aid the bike in having a superior rear grip and control.

Looking at the braking hardware, the KTM has bigger disc rotors both at the front and the rear. Hence, the KTM will have better braking power and performance than the Yamaha.

Here the MT-15 v2 has an upper hand over 125 Duke. The feature list of the Yamaha is better equipped than the KTM.

Additionally, both the nakeds are lacking the turn-by-turn navigation system.

Overall, we can see from the above comparison that the new Yamaha MT-15 Version 2.0 is a better equipped machine compared to the KTM 125 Duke.

But, this is just some numbers on the paper. To really understand and specify which of these two is actually better, we have to get our hands on these machines and ride them back-to-back.