First and foremost, which is world’s number 1 two wheeler company? Our homegrown company Hero Motocorp always claims that it’s world’s number 1 two wheeler company. Now, that is correct only in a single company method. Hero Motocorp is the only company in the world which sells more than 6 million units of two wheelers in a single year across the globe. The second spot belongs to PT Astra Honda Motor of Indonesia, a joint venture between Honda Motor Corporation of Japan and PT Astra International, with 4.27 million Units in the year 2011 and the third spot belongs to our homegrown Bajaj Auto Ltd. with 3.8 million units in the year 2011.

Both Honda and Yamaha operates though various subsidiaries and Joint ventures due to which these companies do not have number 1 or number 2 rank as per single company method.  For example Honda Motor Corporation of Japan has a subsidiary HMSI (Honda Motorcycle and Scooters India ltd) in India and Joint venture in Indonesia Astra Honda (Joint Venture is between Astra group of Indonesia and Honda Motor Corporation of Japan).  Honda also had the joint venture as Hero Honda in India which was ended last year.  It is to be noted that although Honda does not have any stake in Hero Motocorp, Hero Motocorp still sells the Honda engine only.  Similarly Yamaha Motor Corporation has various subsidiaries like India Yamaha Motor Pvt. Ltd. (IYM)  in India and PT. Yamaha Indonesia Motor Manufacturing (YIMM) in Indonesia.

As per holding company method Hero Motocorp has the third spot and in the year 2011. It was just 0.86 million units behind the Yamaha Motor Corporation of Japan.  Both the companies were bullish about their prospect for 2012 year sales. Hero Motocorp targeted to sell 7 million units for the financial year 2012-13 and Yamaha Motor Corporation targeted to sell 8.3 million units.  However, the year 2012 remain sluggish for global two wheeler demand which made both the companies to revise their annual sales target. 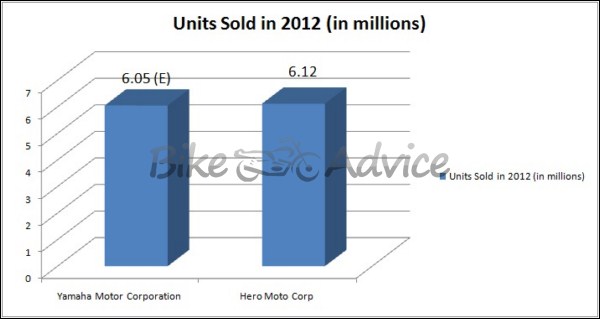 Yamaha’s 75% sales come from South East Asia Region.  Indonesia, Vietnam and Thailand are the major markets in South East Asia from where Yamaha’s most of two wheeler sales origins.  The situation remained disappointing in these markets in the year 2012. Indonesia which, accounts for almost 46% of Yamaha’s total two wheeler sales pie is going through one of the worst year in Indonesian two wheeler industry. For the nine months the sales remain in negative territory compared to last year. In fact in the May 2012 Indonesian two wheeler industry was shrunk by 13.5%. Moreover, Yamaha Motor Corporations has lost some market share to its arch rival Honda in Indonesia. The situation in other markets like Vietnam, China and India is also not encouraging enough. Sales growth in India has come down to single digit.

The world’s second largest market India, is dominated by Hero Motocorp and Yamaha has only 3% market share in India.  As mentioned above Yamaha will register de growth in Indonesia which is world’s third largest market.  In order to come out this situation Yamaha has planned to produce world’s cheapest motorcycle at $500, it has also planned to launch scooter in India and capacity expansion in Vietnam to increase its sales. However all these efforts will take time to boost sales and for the year 2012, Yamaha will not achieve its sales target for sure.

Compared to Yamaha, Hero Motocorp is in better condition to take Yamaha’s second spot. The company is registering more than five lakh units’ sales in India only and for the year 2012 the company has registered final figure of 6.12 million units which is lesser than what the company targeted.  However it is enough to compete with Yamaha Motor Corporation which registered 4.52 million units sells for the first nine month of 2012. Although the 2012 number is yet to be announced we expect the company to close the year around 6.05 million units which is more than 25% less than what company targeted initially.

Hero  Motocorp will have 9 million units production capacity by 2014. Further, Hero can use Honda engine till 2014 so the company will bind to grow in India given its brand equity. The only challenge which Hero Motocorp will face is retaining its market leader position without Honda support which is very crucial to its future.  However, for next two year we will not see any major change in the condition of Hero Motocorp.

It is interesting to see if Yamaha has retained its second spot or Hero Motocorp have gained world’s second largest two wheeler manufacturer spot on consolidated basis in the year 2012, once Yamaha Motor Corporation will declare its fourth quarter sales of the year 2012.