In the current year 2013, scooters are perhaps going to be one segment of vehicles that will attract the biggest limelight. We had brought news earlier about Bajaj Auto working on a stylish scooter to re-enter into the erstwhile dominated scooter market, which it somehow failed to capture with its earlier offering, the Flyte. Parallel, Bajaj’s competitor, Piaggio is also leaving no stone unturned to recapture the scooter segment market. Piaggio already brought out the first premium scooter in the Indian market, the LX 125. Now, the company is working on another, cheaper 125cc motorcycle for the mass public. Recently Honda Motorcycles updated their entire range of motorcycles, the Aviator, Dio and Activa and equipped them with Honda Eco Technology (HET) enabled engine to boost fuel economy. 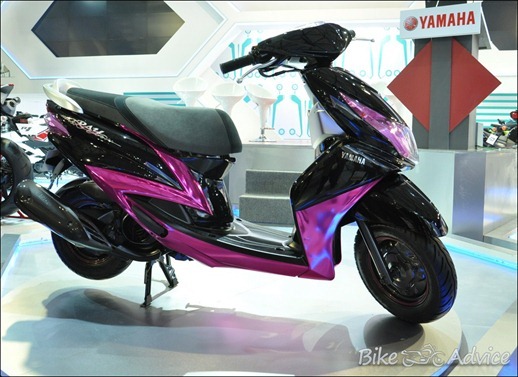 Now, news has emerged that Yamaha is also working on a bigger and more masculine offering after they came out with the Ray. Yamaha is targeting the Ray towards the fairer sex population and aggressively marketing for the same too. For the other half, Yamaha is currently in the stages of developing a larger scooter. With this, Yamaha also plans to penetrate more into the Indian 2 wheeler market. However, Yamaha officially has not provided any statement on this topic, probably because they are in the early stages of development. However, what we can say is that the scooter will feature aggressive and sporty styling and with telescopic fork suspension at the front. Unlike the Ray that features a 113cc engine, the latest scooter might feature a 125cc engine displacement with electric start and automatic transmission. The new scooter from Yamaha is expected to hit the roads in the later half of 2013.

Currently, the Indian scooter segment had been neglected by the manufactures due to lack of demand too. But with demand picking up, manufacturers are turning their attention to this segment and developing better products to fill this void.