Hello friends! This is Vijay Murugan (23) from Chennai working at a Government Organisation, First and foremost I would like to thank the entire BikeAdvice team for your works (Kudos guys!). This blog not only reviews but also gives updates about upcoming two wheelers. 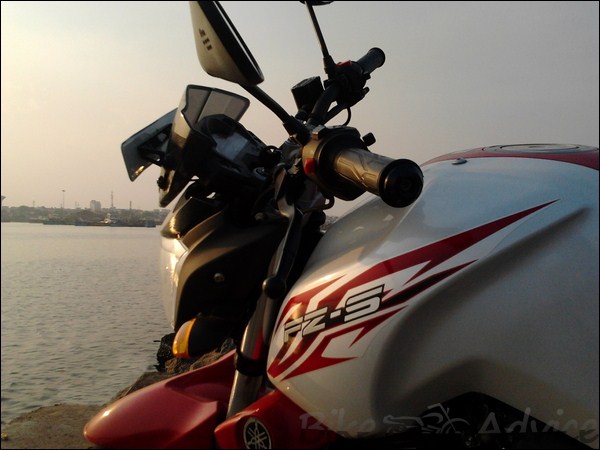 It also gives a broad spectrum of a particular bikes by publishing multiple reviews that gives the user a great idea about bikes and if he has any idea of buying a new one or interest on knowing more about them. I am personally very thankful to the Bikeadvice team. I would like to cut short the intro and get into the subject.

If the word ‘Bike’ is said, all that comes in my mind is ‘Yamaha’. It’s been almost 7 years since I became a member of the ‘Yamaha’ family and I always like to be forever. Yamaha Gladiator DX was my first ever bike and it was a great journey with him and I would like to say that I learnt the art of biking from him. We both had bitter and sweet moments.

It was gift from my beloved dad for finishing my college, is still remember the way I was clinging the bike always like a little boy with his new toy (Those are sweet memories!). It was 2011 and time to give my Gladiator a rest he needed. But this time it was different, I have become a mature rider and I know what I want from a bike. The choice was too simple, it was ‘FZ-S’ and FZ-S only. R15 was a great bike but I couldn’t afford a bike of that cost. 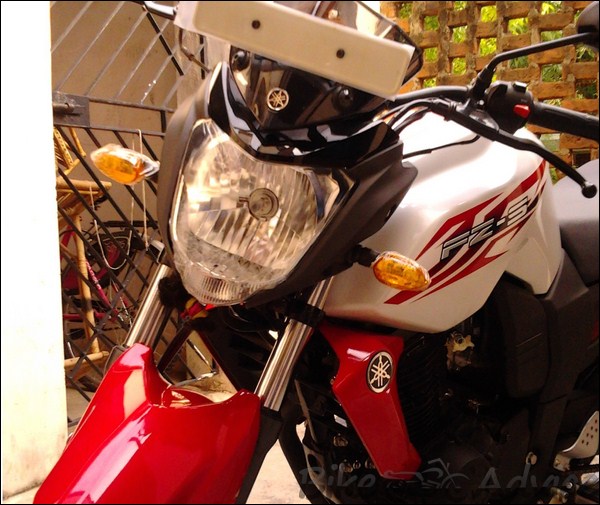 I am very much clear about FZ since I read numerous reviews from bikeadvice alone. I am a city rider and its Chennai the Busyness and adverse conditions one have to deal with on a daily basis. You got to be quick and agile to reach your destinations which is a tuff job (Thanks to the Metrorail Construction!) within the city. All I wanted is bike with some power and handling to tackle roads, simply to ‘rule the streets’. FZ hits all my check boxes so no second thoughts. I went to a Yamaha dealer and booked my white and red FZ and I am really fortunate get my bike in 2 days.

Usually people are very much tempted and jumping to see their new bikes arrival, in my case I was just cool and happy to see my bike getting ready for me. The very first look just amazing! I think I don’t have to explain the looks and design of the bike again and again, one word ‘He looks stunning in the White and Red like a warrior ready to conquer the roads’. 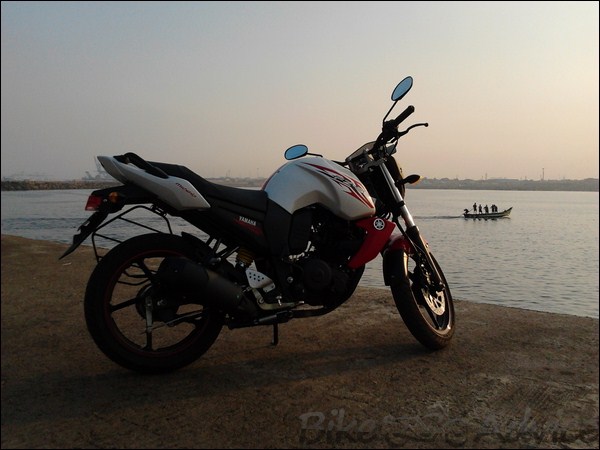 Happily took the keys and started the engine for the first time, the sound, the smell of new engine, the vibe it all brought me a kiddish smile. Those are my first experience, speechless! And again I closed my eyes and remembered my mom and dad as they were my guardian angels (love you dad and mom). This bike has brought me the joy and smile again!

The heart of the bike. Yamaha has really created a gem. I would say proudly that it is a finest engine on market that has a near perfect refinement and amazing power band. It satisfies the needs of a city rider. Sometime I wonder how could a 150cc engine produce such a power within a quick span of time. 40kmph to 90kmph comes as a dream just like that the speedometer jumps to higher digits like a crazy horse!

I would never abuse the engine since I know its capacity, 90kmph-110 was bit sluggish and I have to accept that since it was tuned for city condition. The 13.6Nm Torque was enough to give the punch on the city roads. What matters is the peak 13.6 N.m of torque will be generated at 6000 rpm itself. Simply great work by Yamaha engineers. The gear box is butter smooth and there need not be any dancing in the gear pedals in the city.

‘Magic’ can be a suitable word to explain the way it handles the corners. Once there was a situation it was a risky ‘S’ bend in the city’s hottest place and I always wanted to push the limits of the bikes handling. There was a Pulsar 180 and me on race line (Stop line!) I think he was in a mood to race me to next signal where inbetween comes the ‘S’ bend. 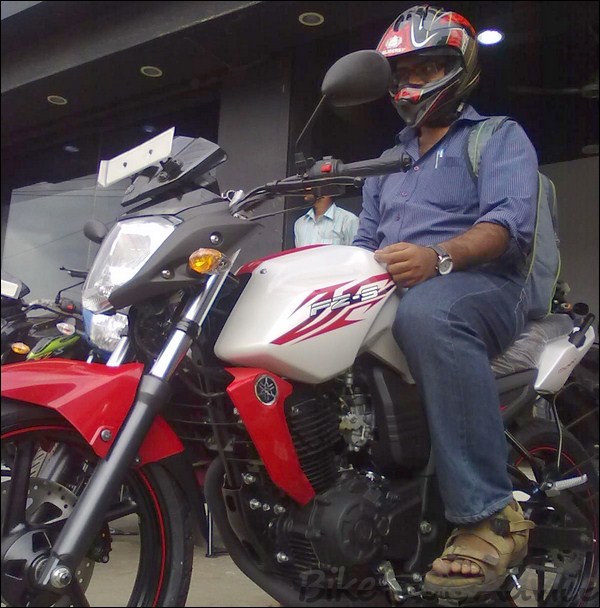 As soon as it turned green he zoomed leaving me in smokes, I know its difficult to take him down in the straight since he has 4ps gain on me. So I decided to power shift to meet him in ‘S’ bend, as soon as he approaches the bend he seems to be slowing it down but I decided to shift down and head on the bend, it was a fraction of a second I was speeding a approx 75-80kmph in bend, the G force was immense and fun.

I leaned till the foot rest made sparks on the road and left him with sparks. In few seconds we two were there in the next signal line. I nodded him and said ‘that was fun’, he replied ‘that was insane!’ we smiled each other and went our ways wishing each other ‘ride safe’. It is the best suited example for explaining the handling ability of this bike.

The Monocross Suspension plays a great part in the Handling department not only providing smooth rides in the city of potholes! This bike has the broadest tyres among the Indian bikes which actually provides more confidence in cornering and stability. The Braking was great 270mm disc will provide the stable cutting down of speed, braking in the rear drum is not that great but will do the work on combination with front disc (I personally think this bike deserves a rear disk! Seriously.)

The bike may look beefy buy Yamaha intelligently handled it with style. The fibre body parts crafted to perfection and also reducing the weight of the bike to 135kg. Since said it is a naked bike styling, Yamaha reduced to fibre parts and made the bike more revealing.

The Midship Muffler an iconic concept in the bike not only designed with aesthetic sense but also with a engineering aspect it help in Mass centralisation, the concept in which Yamaha is pretty much strong. It has a strong diamond frame and Meaty Front forks performing their respective duties. Yamaha has spent overtime on aerodynamics to give the bike an edge over its competitors.

The bike is an Engineering masterpiece that I could spent a day watching it really! Every FZ owner will feel the same as it fuses with you like a part of your body which is a unique feel even your slightest action will causes the reaction mechanically. Its a whole new experience for me. So far I did 6000kms.

Still every ride makes me happy and forget all my worries, He is more than a machine to me! We share a bond a bond that can be felt only when you understand your bike to the full. Every other bike companies concentrating on power but Yamaha is making revolutions in the Handling and performance section that needs an applause!

If you are a person who doesn’t care more about mileage then its for you. The aggression is all over the bike, make use of it only for the enjoyment not for proving that you have a best bike or you are a best rider. There are lot of worthy thing we need to prove in this world. Enjoy the ride have fun, some thrill and please don’t risk you life and others too. Use a branded and costly helmets instead of cheaper and cooler looking ones since spending a few more money on safety is not a crime.

Adios amigos! Godspeed! This is my first bike review so please forgive me for the mistakes.