Hello I am Sudesh and I am here to share with you the journey of my life as a biker. I am a B.E (CSE) from Saveetha Engg Collage and biking has remained an integral part of my life since my early childhood days. 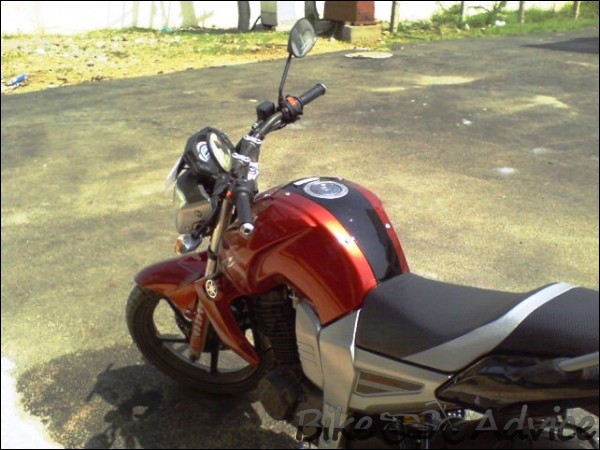 My passion for biking has started in quiet a young age. My first bike was Hero Honda splendor (Standard 9th to 12th), then came in the Yamaha Libero (Collage 1st year). I have good amount of experience riding Bajaj Discover and CBZ extreme as well.

My passion was ever rising and then I tried my hands on Yamaha FZ 16. It is a mere coincidence that I happen to be the first one to book Yamaha FZ 16 in Chennai (priority No: FZ1 for booking). Before I laid my eyes on the bike, I was unaware of the specifications, performance, mileage and price.

I was so much wooed by the design and the overall technical specifications of the bike that I have decided to review the bike. FZ 16 has unmatched specifications like broad tubeless radicals, Moncross and the eye catching design. I also have accomplished in making many heads turn in and around my locality. Let us now get started with a short yet deep review of the bike.

FZ 16 has one of the finest handling and stability when compared to other bikes like R15. When you are riding on FZ 16, there is no certain chance that your bike goes off balance or shows some handling problems. It has a tough body that has the tendency to prevent its riders from any severe damages even when the bike is met with some damage. I would say that the bike has excellent handling when compared to other bikes in the segment.

The bike is highly stable with sound braking system that allows you to stop when situation demands. FZ 16 has been designed on the platform of racing bikes and thus it shows excellent racing like features while riding. For instance, the bike bends smoothly on the sharpest of the curves without much of a problem. The braking system of the bike is really fantastic as it responds to the rider’s action quickly. This reminds me of an instance in my life, a few days back I was going at a pace of 80 Kmph with my friend sitting behind me, we were at a blistering pace and suddenly noticed a traffic stop signal with a brand new ford fiesta standing right in front of us. I applied brakes when we were just 5 feet away and the bike stopped right behind the car, this proves the efficiency of the braking system FZ 16 has. Unlike other bikes, FZ 16 doesn’t show any vibrations even at the speed of 80.

As far as the mileage is concerned, I did not care about it in the beginning. I used to refill my bike every time I saw blinking lights on my fuel meter with Rs.200 worth of fuel. This way my routine was fixed i.e. to and fro from collage to home (25 kms). One day I noticed that the fuel that was left over at the end of my journey was getting filled in my reserves and thus I decided to put my bike on a real test of mileage.

I filled in my bike with an exact liter of fuel and to I noted that the level touched reserves only after 42 Kms on highways. I also have tested FZ 16 in traffic and found that the mileage was above 30 Kmpl. Thus, I can say that FZ 16 gives you a good mileage in both the city traffic as well as on Highways. I was really happy to buy this bike because of its eye catching design and fuel efficiency.

When it comes to riding comfortably, I would say that there is no competition of FZ 16 except one R15. Other bikes like Karizma and the latest ZMR also are not good enough when it comes to bends on the sharpest of curves. I would like to request you not to compare the mileage of FZ with other 150cc bikes because FZ has got superior tyres which allow you to maintain perfect correlation between the tyre and road.

Pick up: The bike is not for pick up but rather it has a tendency to generate higher Bhp. You can gradually reach 132 Kmph on Speedo meter unless you are slowed down by traffic. As far as the pick up is concerned, FZ has a pick up of more than PS 150 but less than PS180. You can get a great pick up till 90Kmph and then it moves slowly till 110 Kmph. After the bike reaches 110Kmph, pick up lags and doesn’t move an inch more than that. The idea to raise the pick up more than 110 only lies with the people who take it for a long drive.

Speeding FZ 16 is never easy, you will have to pay attention to two important factors i.e. engine oil should be checked and the tyres are to be inflated at 33 psi. If these factors are paid attention to, you will surely see your baby cross 110 Kmph.

Directions to attain the much desired speed: Below are some directions that you may follow to attain maximum throttle and speed.

I drove ruthlessly rash and when I gave my bike after 26,000 Kms to servicing, by gods grace it was still in warranty and the service people obliged and changed the damaged valves. Thus my advice to bikers is not to ride rash every now and then.

Reasons To Choose Other Bikes in the Same Segment

R15: Yamaha R15 is a really expensive bike but it is worthy of your investment. I would say that if racing is all you live for then go for this bike. There is a problem with R15 that it hates the word mileage.

ZMR: The ZMR is really lengthy bike. You can go for this bike for maximum pick up and top speed. As far as the mileage is concerned, ZMR is not good enough. I would say that FZ is better in respect of stability with reasonable mileage.

Pulsars: Pulsars use outdated styling than compared to other bikes. Personally speaking I don’t like Pulsars very much. You should opt for Pulsars if you wish to incur least operating costs (Hero Honda, Yamaha, Honda are all expensive).

Honda Unicorn: It has got everything i.e. mileage, pick up and other things but somehow I feel that it is more of a bike suited to the elderly.

Apache RTR: I think the bike has powerful engine and good looks but its not my pick because of handling problems. I do not prefer RTR because of the instability quotient. A 15 year old Yamaha RX100 is better in terms of handling and control than RTR.

I do not intend to offend RTR riders in any manner but if you meet with an accident there are chances of getting yourself seriously injured. I will have to appreciate RTR for its powerful engine. Then again, only an engine doesn’t mean a full fledge bike. Apache shakes at high speed and is highly unstable too. I personally feel that there is no bike fit in all respects inn India.

Things to Consider Before Buying a Bike

Hope you all have an excellent Biking experience. Through this review I do not mean to offend anybody. Happy biking everyone.