The RX100 and RD350 ruled the roost during the golden age of two-strokes in our country. There was no doubt that Yamaha was top dog – but somewhere, somehow, they floundered with the four-strokes. However, they have now taken the decision to go back to their roots with the FZ series & R15 being the first step in that sporty direction.

Here is my review of Yamaha FZ-16. Got this bike on 27th October 2010 from Paras Yamaha, Chennai. Now crossed just over 1280kms.I chose this bike trusting yamaha, with milege not being on my priority, and handling, breaking & comfort being the top priorities.

No doubt, grabbing attention is something the FZ-16 does with ease. It’s impossible to lose focus when you’re looking at the new Yamaha — it is both shapely and arresting. 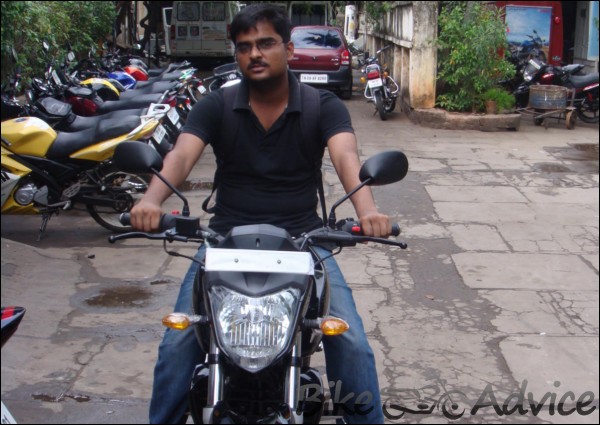 The Indian FZ borrows design cues from its gorgeous-looking big brother, the FZ-1, and is a similarly smashing-looking street bike. Minimal body cladding is the norm on the FZ-16, with its engine and cycle parts boldly visible as essential elements of the bike’s overall style. Designed to show minimal gaps and following a compact theme, the FZ-16 has been sculpted by longstanding Yamaha partner, GK Dynamics of Japan.

The new bike uses delectable slim-spoke alloy rims in black and the same colour scheme for its engine, swing arm and silencer.

Massive section tires add to its allure, while a broad, conical front headlight with a piercing beam and small city light peer from below the FZ’s petite Liquid Crystal Display (LCD) instrument bay. The instruments — including a rev counter; speedometer and fuel gauge — offer everything in a sporty-looking digital format.

Cons: the LCD Bay is not as impressive as the one found in Apache RTR 160FI, which has data logger etc. The fuel gauge is a misleading one in FZ-16. For instance, since the last bar started blinking I rode 53kms before I filled petrol that too without changing the fuel knob to Reserve!

A handy engine-kill switch is part of the package, as is a handlebar-mounted choke lever on the left. There’s a massive and fabulously sculpted dummy resin fuel tank as commonly found on superbikes, a brushed finish alloy fuel-filler that unfortunately lacks a hinge and snug knee recesses that perfectly tuck away a rider’s thighs. 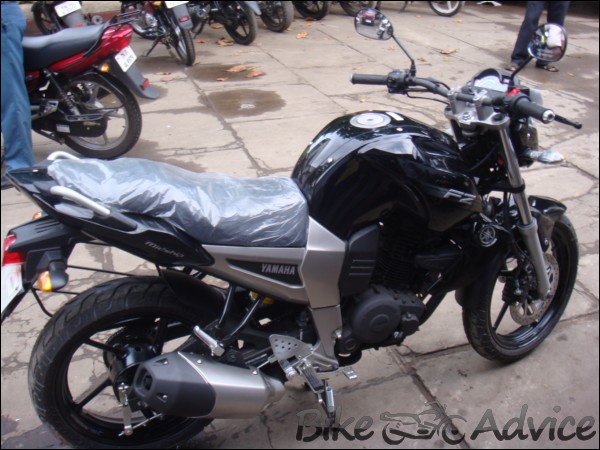 The tank is bisected by a bold secondary colour stripe down its centre, while the actual 12-litre fuel-storage bay sits tucked just below, purposely closer to the bike’s centre of gravity. The FZ-16 comes with a chic engine cowl, constructed with vents to direct and shovel air-flow straight to the engine and spark plug.

Other arresting details include alloy footrests for both rider and pillion, an exposed O’ring sealed drive-chain, smartly executed split grab-bar and a nifty rear tyre hugger. Look closely and you’ll see that the new Yamaha uses a compact sheared silencer which routes itself midship, beneath the bike’s swingarm and frame, in the region of its rear tyre hugger. This is constructed with 1.5 metres of exhaust pipe that coils like a snake in a box just aft of the engine. The FZ-16’s flanks and tail are drop-dead gorgeous, while its attractive tail light is housed within the rear mudguard.

The Yamaha FZ-16 uses an all-new, four-stroke, single-cylinder and CV carburetor-fed engine that displaces 153cc. The air-cooled power plant uses large size fins on its cylinder, as well as cooling fins in the lower sump region of the power plant.

Tuned primarily in the interests of easy city riding, the FZ puts out a healthy 14bhp on tap at 7500rpm, and offers a purposely torque-laden and linear spread of power, unlike the peaky R15.

Ignition mapping is three-dimensional and takes throttle inputs into consideration via a Throttle Position Sensor (TPS) located on its Mikuni-make carburetor. This thumb-started (with no kick-lever) engine uses an auto de-compressor for ease of starting, as well as a single-axis balancer that works to cancel out all vibes at source. Friction-slaying essentials like bearings on the rocker arms are incorporated.

The FZ-16 uses a five-speed gearbox that shifts via a toe-shift lever in the universally accepted one-down and four-up pattern. I found the FZ enjoys a perfectly weighted clutch, and precise, smooth-shifting gearbox with perfectly-spaced gear ratios that leave little room for improvement.

Twist the throttle, and the engine responds with a sporty note that makes other road users sit up and take notice of you. The engine is extremely smooth and vibe-free, and pulls strongly and achieves 0-60 around 5.5seconds. The bike moves briskly, especially when you factor in that the intuitive 5-speed gearbox needs just a nudge on its gearshift lever to swap ratios. Finding neutral is never a problem, either. The clutch is soft, with smooth engagement. Handling is exceedingly nimble.

Performance is sprightly enough, comfortably at par with most of its 150cc rivals. The highlight of this Yamaha engine is its punchy, smooth and user-friendly wide power band. Also the bike doesn’t vibrate even at top speed. I managed to reach only 90km owing to heavy traffic couldn’t go beyond that. I realized that 0-90km the bike reaches quickly. After that it may take some time to go further.

The FZ-16 uses a conventional diamond-type, single down tube tubular frame that bolts in its engine as a stressed member. A clear advantage over its rivals is the FZ-16’s rigid 41mm front forks, which are able to compress 130mm. This pair works in unison with a seven-step adjustable single rear shock absorber that does not use linkage. It gives the best suspension on uneven roads with lot of potholes.

The FZ 16 clearly proves itself a capable motorcycle, with 17-inch rims, a comfortably upright riding posture, well-padded as well as ample seat space and wide handlebar all coming together to make this Yamaha ideally suited for stress-free city carving and faster highway riding. It enjoys a near-perfect ride quality that is more firm than soft, with a sound handling character included in the package.

Cons: Long drive won’t be a comfortable one for the Pillion.

The FZ-16 also offers exemplary straight line stability and fine high-speed cornering manners at all times. This is a motorcycle that no good rider will want to dismount. My ride included several fast-twisting sections of road, where the Yamaha instilled confidence, allowing itself to be flicked from side to side with an easy, controlled feel, which continued even when the rains gods caught up with the FZ party, drenching me with a particularly nasty downpour.

The FZ comes with a 267mm front disc-brake and rear drum unit that works in tandem to haul the bike down safely from speed with an ever-present, progressive feel.

Its meaty, tailor-made radial, tubeless and special compound 100/80x 17 inches and 140/60×17 inch section MRF tyres work magic to provide enormous traction and a stable, planted feel at all times. No question of falling off, unless some vehicle hits us!

Suggestion: Fill it with nitrogen for much smoother performance.

CONS: No Disc brake for rear wheel. Though the current one drum brake is not bad. Disc brake would have been much better.

The Bike gives between 38 – 40kmpl in cities. Didn’t test it on highways.

Choose FZ—16 only on following grounds

Then FZ-16 is the ideal bike for you.

It’s not at all lean but it’s mean to the core. It’s got the looks that evoke sinful passion. It’s all new street smart FZ-16. So manipulative; it turns every obstacle into a piece of cake. So powerful; it makes every other machine feel worthless. Such a charmer, it uses its good look…s to get all the attention it could ever ask for.

And to top it all, it comes with such advanced technologies that it rules every bit of the street it treads upon. So make way for India’s first street smart machine, make way for the lord – Yamaha FZ-16.

Have a happy & safe riding

P.S. What do you think about my review? Please leave your comments! 🙂