Hello bikers! This is Amol Birje (AB) from Aamchi Mumbai and an avid bike lover. I own a FZ16 (Red) and I just love this bike. The reason I love this bike is because this machine has just boosted my confidence to a next level. This bike has turned out to be my companion. 24*7 I think about her and just can’t imagine my world without my FZ16. 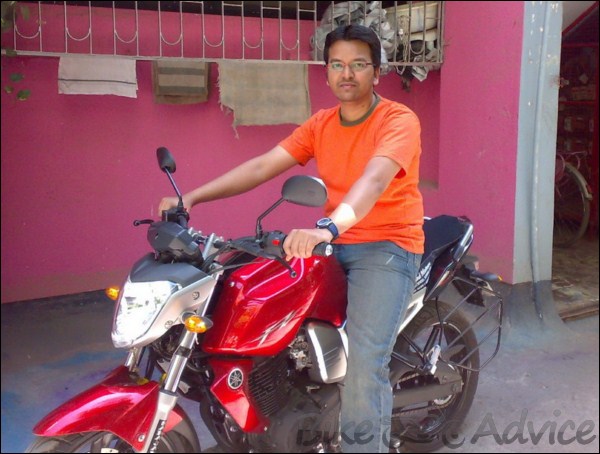 It was in the year 2000 when I was a college student and passion for bikes and biking took a place in the corner of my mind. I used to admire the bikes but never rode one. I was kind of “Virgin” in biking and it took me almost 9 long years (right!!) to settle my arse on a bike for the first time (I never rode one, not even as a pillion). My beloved wife found that I had a bug for biking in my brains and it was a surprise gift from my wife in February 2009 when she presented me a second hand Honda Unicorn. (I know not many guys are lucky like me).

I had this bike (Unicorn) with me for almost 9 months but I did not know how to ride it. I had very few friends of mine who used to ride but nobody had time to teach me and my bike was just waiting for a ride. One day I decided to learn riding all by myself and took the bike on tarmac. Just imagine a novice like me who doesn’t even know where the breaks are, what a clutch is, how to shift gears and how to throttle, is riding a bike for the first time without any instructor. It was very difficult for me to learn on the first day and all I could do was to ride the bike in first gear trying to maintain balance (Don’t laugh, I was a novice then. Try to compete with me now).

It was all what I did on my own for the next three days and literally struggled when my neighbor came to know that I was learning to ride. I was unaware he used ride and it was like he was sent for my rescue. He taught me some important things about biking and rode with me for almost an hour. I slowly got into the rhythm of my bike and within two days, I was able to ride my bike properly….well almost!! 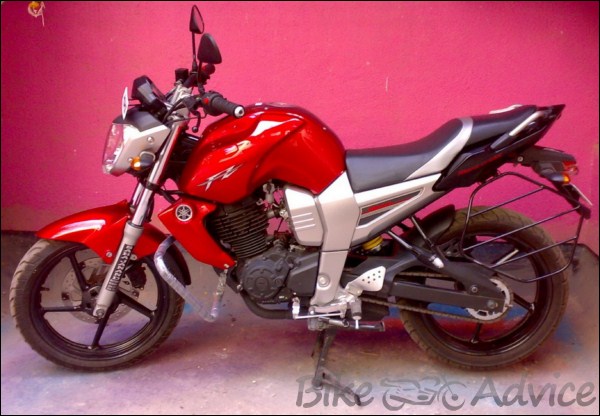 I then began to ride my bike for one hour every day. (I admit that I didn’t hold a driving license in those days) My confidence was building but still I was doing many mistakes which I realized later. Then came that unforgettable day in my life when I decided to ride my bike along with my wife. We decided to visit Ganesh Temple which is located nearby our colony and I was overconfident about my riding skills. I rode well until we reached the temple where I….err…crashed with another bike. Don’t remember much about that accident but only thing I could remember was that the biker with whom I crashed was riding like the road belonged to his grandpa. I had to take sudden left and at the same time he leaned to his left side and I just happened to collide with his bike. By god’s grace, nobody was hurt and that fellow was acting like it was entirely my fault. His bike didn’t even had a scratch and mine was a whole mess.

When we crashed, because of the mono-shock suspension of Unicorn, my wife was thrown away from her seat and I am thankful to god, she was unhurt. I suddenly realized that my wife was on the road and a bus was behind her. I quickly gave my hand to her and grabbed her to take her off from road. (Gosh I still remember that day which leaves a teardrop in my eye. It could have been the worst day of my life. Thank god!!) I headed to a nearby garage and total cost to repair my bike was about Rs. 1,500/- Moreover, the accident not only shackled my bike, but my ego as well.

After that incident (actually accident) I lost all my interest in bikes and was very much depressed and lost my confidence (loser!). I decided to sell my restored bike and say farewell to biking – but that was not going to happen. I eventually sold my bike (in Sep 2009) but the bug for biking was still bugging me, for days to come.

My wife realized I was low on confidence and knew exactly what needed to be done. She made me calm and consoled me saying that the second hand Unicorn must have been faulty. She just diverged my mind and taught me the most important lesson in my life, “Because of the other peoples’ fault, we sometimes have to face troubles. The only thing we can do is to take care of ourselves”.

I slowly came back on track and one day I saw an FZ16 when a thought struck me to own it. I had seen many FZs before right from the day it was launched in Oct 2008 and obviously was one of my dream bikes to own but I never thought I could actually own one. Even before buying the Unicorn I used to praise the looks and design of FZ16 and the fantastic work the Yamaha guys have done, but the bike was still a dream for me. It was my wife who insisted that I should go for the bike which I loved, for which I used to laugh. I then realized one day that I had some affection for that bike and eventually bought the bike (Feb 2010, with help from my dear wife, of course).

I knew the bike belongs to a premium segment and it almost tumbled my financial conditions but I insist you should pay the premium for the kind of bike you get in the form of FZ16.

I bought the bike then only I applied for a learning license (silly, isn’t it?). Again the same old story, nobody to teach me. I requested two of my colleagues to teach me and they agreed. I rode the bike for a whole day and realized it was a whisker to ride. A novice like me who lacked confidence was able to handle the bike like a pro in a single day. The rubber on the behind made sure I didn’t need to care much about the balance, and the gears, throttle, breaks everything almost tend to forgive you for all your mistakes. I gained all my confidence in a very short time.

I am almost 6 feet tall and the bike is just perfect for my height. The forward inclined riding style is awesome and you feel like a man when FZ16 is under your butt. The first large Ø41mm shocks in front and a Monocross rear suspension for rare tyre unit help ensure agile handling. The seat is comfortable enough and the design of the whole bike is macho and is a treat for the eyes. Fully digital speedo, another first in India. Many say that the pillion seat is a pain but my wife never complains about it (strange, right?). Headlight is the most attractive design factor for many but I personally don’t like it very much, providing the fact that the number plate on it just kills the good looks. Muscular tank and tank beefs, colour theme all over the body, comfy seat, great ergonomics, rear section and the rest of the components all are of top notch quality. Moreover, a smile is always glued on my face whenever I ride my bike. 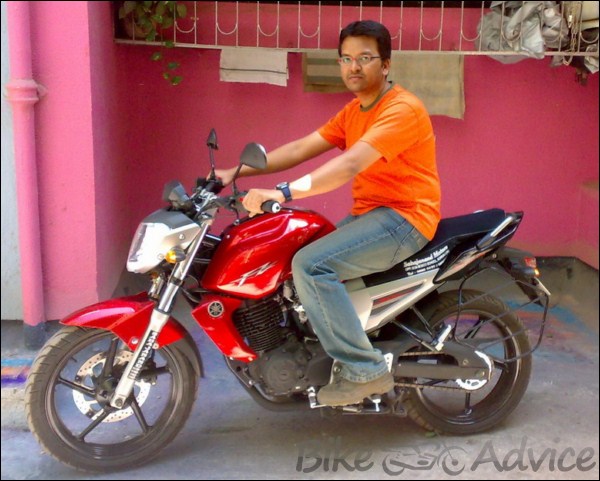 I never thought in my life that I can ride a bike for the speeds above 60 kmph, but believe me, I have easily crossed above 100 kmph mark many times and what I found is my bike asking to push her more (I seriously don’t understand why people say she looses breath after 80 kmph). The only thing you need to do is to take proper care of your genie and she will fulfill all your wishes. You have to maintain this bike regularly like time to time servicing and checkups so that you can get the most of her.

My office is just 13 kms away from my home and I wished it would have been far than that. 90% of my riding is on highway and I ride in the speeds in excess of 70 kmph. Yet, my bike retains a fantastic average of around 45 kmpl (yup, I calculated it). The bike is nimble to ride even if its day or night, sun or rain. It seems like you are playing a video game which keeps on getting more enjoyable. I take this bike on occasional trips outside Mumbai and every time it feels like a dream run, moreover, I take my wife along with me without any doubt about the bike’s capabilities. People stare at my bike and just wonder when I zoom past their khataras and can only see the fat rear tyre. Damn sexy!!!

Alright, you will say that this fellow is just in love of his bike and will only say good about it. Well, it’s not like that. I agree that there are a few issues with this bike. The bike is expensive for a 150cc. Not that nimble when a pillion is behind. Monoshock is not that great over big potholes. The bike may look like a toy. Some say Apache/Pulsar/Unicorn or a CBZ are better than FZ16. But let me tell you the fact that this bike is a joy to ride which no other bike in the country could offer to you. NO OTHER DAMN BIKE. You can not ignore the fact that this bike, along with R15, has changed the peoples’ point of view towards biking in India. It is after these two bikes that the other two wheeler manufacturers are seriously thinking about introducing world class bikes here in India where people are still negotiating for the ‘Fill it, forget it’ kind of crap. Enough said.

Anyways, I don’t give a damn what the others have to say about my bike. After all, it is not the best because I own it; I own it because it is the best. Period.