“Sync with me…” Yup, those were the very first words to come out of my mouth, with my right hand on the dome and looking deep at what was right there in front of me, minutes from becoming a huge part of me. Standing right in the middle of the room, posing like a superstar, in staggering and ferocious red with a pitch black stripe running along in the middle. 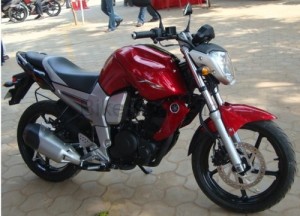 It was a moment that cannot really be described in mere words, it was an experience. The enormous gush of joy, excitement and sheer happiness was just out of this world. It was there; right there, under my palm… the end to my waiting.

My very own FZ. This is write up is not another review or an ownership take on the bike, nope, this is an experience. The one that I have been waiting to put it down in words for quite some time. So, here we go.

“But before I start off, I really do want to thank my parents so much for putting up with me and my quest for getting my bike. I honestly do thank them so much for this.” Now where was I, oh yes! Please read along now. It is this sense of nostalgia that crept into me from the past couple of weeks every single time I was riding the bike, a sense that completely fazed me out of the dreary traffic along my side.

Not that I wasn’t in my senses while riding or anything, but come on, any biker would understand what I’m trying to say here. With every rise in the throttle, and the super-slick gear shift, it is a feeling of amazement and the need to just zoom ahead of everyone and leaving them behind. What a feeling that is!

But it’s not all about speed and giving it the beans or anything, there is more to me and my bike than most cases. I really do owe a lot to my bike, ever since I got it home, things started looking up for me. It was like the end for a long phase of struggle slowly fading away to the past. But as I said, there are quite a lot of things I can relate to but that’s just for me to know.

I really do credit my bike for these to great extent. So in return like the English, I knighted him as with a name (Oh come on! like none of you have ever done this before!). I called him the “Dragon” [Eerie isn’t it!]. Don’t ask why, because I just did.

But as times flew by, and when things weren’t exactly normal, and with some of my close ones moving out to different cities and time felt passing by at snail’s pace or even slower than that. But the bike was there. It was there for me, on days when I was completely down and out. It knew the ways to cheer me and keep my spirits up. [Woah! Nearly started reminiscing the moments that I don’t want to reminisce. Move On! Move On! Move On!]

Well to divert a little from the usual, I see my bike as an entity with various personas. It is like the dog that I never had, it is the companion who connects on a whole other level, it is like a friend who knows how to lighten you up when needed, it is like your side-kick who would stand by you in the given situations, I can go on and on about the ways I relate to my bike. It really is quite an epic part of my life. I simply respect the machine immensely.

Now coming to a recent topic of discussion, I wouldn’t say that I have been one of the safest riders over the year, hell no. I guess that conception took a beating when I met with my first slightly serious accident. This incident literally split me up into something. Surprisingly, I ended up with just a few bruises here and there on my hands and knee.

But unfortunately, I couldn’t say the same for my bike, I wish I could but that wasn’t the case. After I got up from the fall, I turned to him, looked at him lying there in the middle of the road. That broke me. It hit me so hard that I genuinely wished it was me there instead of him. I couldn’t stop hating and beating myself up for what I made him go through. It really did ripped me apart within.

But as I took him to the side and dusted him off, corrected the mirrors, glimpsed at the damaged headlight, turned the key to ON and pressed the little start button and the champ roared back to life. It was a mix of sensation and respect then; I just couldn’t stop gaping at the bike and couldn’t get enough of the impeccable sound being produced by him.

“What a machine really!” Couple of weeks later, I got him fixed, although it didn’t sound like that much of a damage, like the headlight and one of the indicators had come out from its position and a slightly bent crash guard. But sure as hell, did leave a significant hole in my pocket. But I guess it was worth it. And given the situation, I thought I could give it a new nick name: say, Phoenix! signifying the rise of him, post a facelift. [Chuckles] Well, I really did want to, but due to excessive popular demand, I stuck with Dragon itself.

I don’t really want to get into the technical details or the performance of the bike because, I believe one’s bike is what one makes of it or how one uses it (plus there are quite a lot of reviews by experts posted already). For me, the bike is something as I said earlier, an elemental piece of engineering with which I get to connect on various levels.

For me, it rides perfectly, even long distances. It knows how to make the most when I show it some corners. It knows when to get thirsty and knows when not to and thus doesn’t burn a hole in my pocket. Overall, as a bike it works more than perfect for me. I have nearly come to the end of this write-up on my monumental experience with the little fellow, and just in time when he turned 1, few days ago.

As I said in the beginning, the bike, the magnificently crafted showcasing of masterful engineering. The yardstick of marvel and amazement. It is succinct, sublime and superb. It really is a consortium of prowess, panache and perfection. It really is a Masterpiece.