Pratik has submitted this review in our Ownership Review Contest No 13, ensuring himself an assured prize. The contest also offers a chance to win Riding Jacket, Helmet and more…Here are all the details.

Well , my name is Pratik Khandhadia, 20 years old from Kolkata West Bengal. My story starts from 5 years back when I was in class 8-9…. That time Dhoom movie was released and since that time my craze for bikes started. Yeah it was all worth of a child fantasies only. 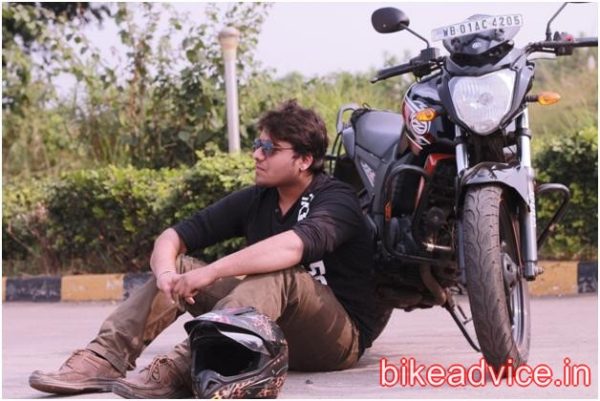 But this child fantasy didn’t seem to be limited to childhood only. It was carried onto my teenage also….. during those days one of my best friend got an Activa.. and we were like used to roam around full day. Whenever we got time whether it was day or night we used to roam around. The maximum stretch of kms in our area till we went was airport but that was also more than enough for us …

He taught me to ride Active and thus my childhood fantasy came to be turning into reality of riding a bike , although it was a scooty. Saurabh Singhania. thanks a lot buddy. Tu nhi hota toh mera bachpan ka sapna sapna reh jata :P.

Well then I was in class 9 when he started taking out his uncles Suzuki Heat – a 115 or 125 ccbike… although not so powerful but for me a starter, a person who doesn’t know anything about gear shifting and clutch that was a perfect piece of cake for me. Ultimately as time passed he taught me bikes also. Initially I used to think that Activa scooty is best as there is no gear shifting nothing just twist the acceleration bar and there your vehicle starts moving ahead but when I learnt bike it was like good bye gearless scooties and hello bikes…

I was in class 10 now. I scored 68.6% in science stream and when I asked for a bike as of dads condition of scoring more than 70% he refused saying 70 is 70. You didn’t score 70 so no bike… You can get a new PC or lappy but no bike. I was damn depressed and sad. Nothing worked out no hunger strike , no rona dhona nothing.

He said “to get something you have to earn it“. And true also. Then it was decided that in ISC I have to score 70 plus. And this time I was like yes I have too. But as we know in this era of Whatsapp Facebook, one cannot be so much into studies; exceptions are always there although. But I am not in those exceptions 😛 luckily.

Well, it was class 12 now also I used to ride that friend’s of mine his Suzuki and at times Activa. We rode more than 50000 kms on that Activa in those 4-5 years. 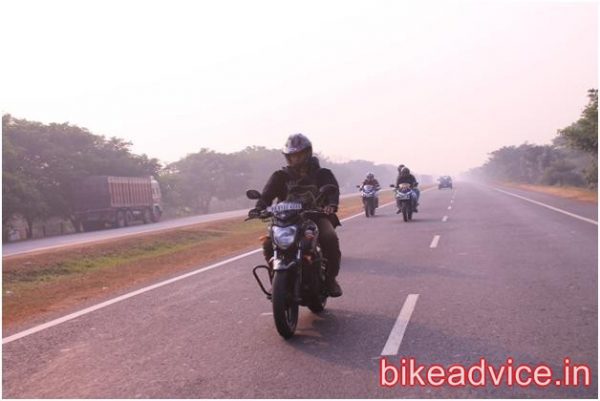 Well now its class 12. Time to pull up socks, I gave my best to csore 70 plus. But this time also luck didn favour me and I landed down at 68.45% all thanks to my sir on whom I trusted and didn’t attempt few chapters as they already came in last year exam. Well now as I knew I scored 68. I saw history repeating in front of me.

But this time I could not take any risk. I could see my bike going away from me. I told my dad and initially he told me so this time also no bike but later he himself said .. Will go in a week or two for a bike. I was like. Yepeeeeeee hurrayyyyyyyyyyy.

I started surfing online. Reading blogs, checking out showrooms of TVS, Bajaj and Yamaha all over. My heart was won by three bikes

Tvs apache I loved it simply for its racing dna and the white edition of it. Yamaha fz-s – a decent bike, decent mileage with good looks and great road grip. But my mind was fully occupied with R15 v2.

But I knew it was out of my budget and dad also wouldn’t allow me to have that bike specially with that kinda seating and all. Lols. Its obvious they wont like it.

Well, even one of my friend or colleague on Facebook, Ranet Mallick, helped me a lot in deciding my bike. I literally talked to him hours a day before when I purchased my bike. I kept switching from bikes to bikes and he telling me details of it very patiently. I must say he has loads of patience… lols he even thought that I am just fooling around and I am not going to buy but I am just doing time pass.

Well it was 24th may and dad said chalo lets go for a bike and I was like hurrayyyyy aaj subha kiska chehra dekhke I got up.

We went to keshtopur Yamaha factory outlet and got one fz-s. it costed me 85k on road.
When I entered the showroom and saw the bike I was like the bike is telling me to take the keys start it, push the self start button and hit the road. And honestly with the lord of the street. It was an awesome feeling

Well as all formalities were done, I sat on my bike. I bought a black and orange edition as it was new in market. I started the bike. The sound of engine. uff the vibes which I got. Cant express the feeling which I got at the first ignition of the engine. When I first shifted the bike to 1st gear. I left the clutch slowly and there I was on the road with my lord of the streets and vrooooooooooooommmmmm I was enjoying my ride. From showroom till home I rode for 20 kms. I was very happy..

Well as now my dream came true that night really I could not sleep. Was looking at the bike keys didn’t leave it, held it for whole night 😛 sounds funny and childish but whatta do. Cudn’t believe that I was living my dream 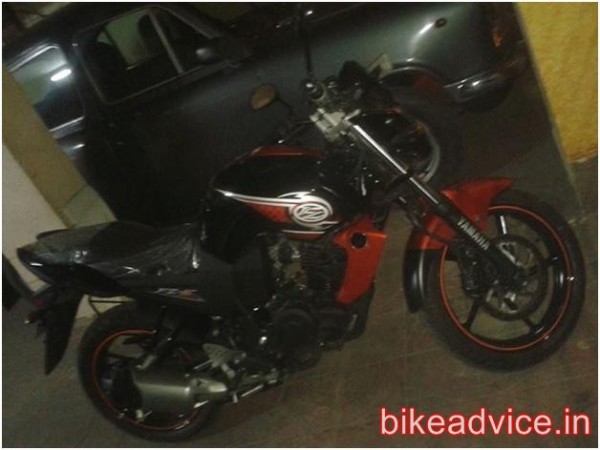 This is the first pic of my fz-s. love d shine the feel of a new bike..

Well it was hardly a month or so that I could not control and I hit the highways, NH2 for Bakkhali…. a 300 kms journey…. Left Kolkata around 6am and reached Bakkkhali around 12:30-1. And came back by 7 pm in evening…

First time I hit the highway the experience was awesome. I never ever knew how were highways also. I didn’t have any of my documents not even registered no plate nor d blue book nor the smart card but still I went for a long ride 🙂 😛

Well had an accident also on my new FZ-S… for some fellow idiots on road… seriously the tyre ad film says correctly. If you have seen … it says “the roads are filled with idiots”. 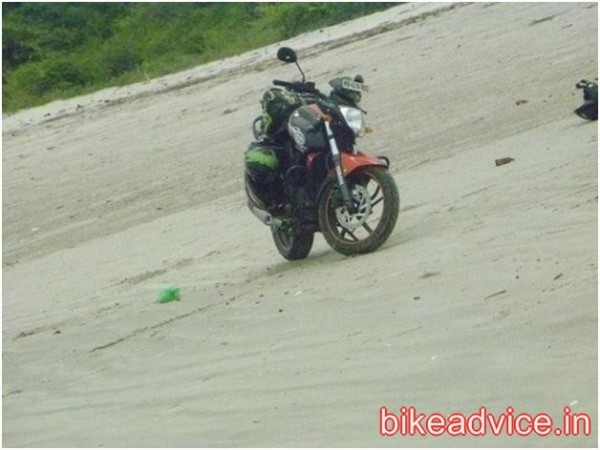 Nowadays bikes don’t go and bang into people. But people bang onto bikes. Nor will they cross the road nor will stand on sides; will stand infront in the middle and start doing left right dance..

Well again few months passed and now in the month of December I again hit the road. This time Basanti highway. And destination was again Bakkhali with my biking group known as chakra… 6 bikes accompanied me and it was a bunch of a fun thrill and excitement packed in one journey.

Roads were in very bad condition still FZ-S didn’t create a problem anywhere. No heating up of engine no fumes or smoke
No vibrations on high speed nothing. From highway riding till off-roading FZ-S rocks in both the segments.

This time full journey was off 345 kms. The foggy conditions at night on highways, the cold winter season which was damn cold… seriously had an all together new experience…

Now the amazing fact which I came through was, both the times when I went to highway my full journey was completed in Rs 500 petrol only. I refilled while starting the journey and even when I came back both the times there was fuel left in my fuel tank. And I was amazed seeing that in approx 6 litres of petrol or so. I travelled 345 kms.

Some pics from my second journey 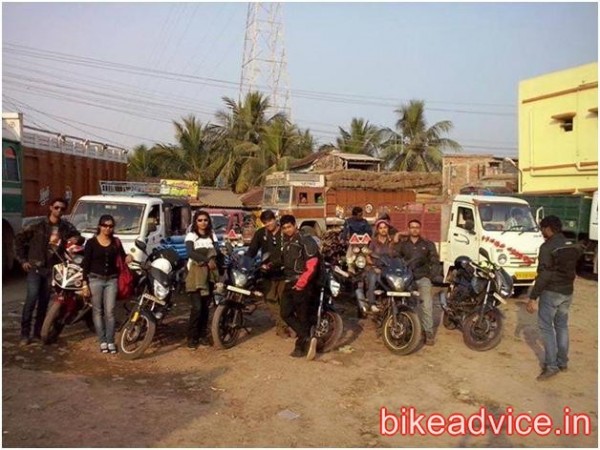 Well I love my fz-s like anything…..No complaints no demands…I love my bike and my bike loves me…the passion for biking and riding is increasing day by day within me. And I know its never going to stop as we know – The roads can have corners but it never comes to an end..

Thus, now in the end I would like to jot down some positive and negative points of my FZ-S that I have noticed.

Rest besides this there are no major faults or problems I found in Yamaha FZ-S. Well in the last I would just say love your bike respect your bike and in return your bike would love you respect you and be always there for you.
Riding+bike+my passion= ME.