Since the 80s Yamaha has carved a niche in Indian biker’s hearts with some stupendous launches under the RX and RD series of bikes. After being dormant for a few years in between Yamaha stuck the right chord launching the tech laden R15 and superb looking FZ 16. Following closely, to keep the freshness and the sales ticking, Yamaha launched the FZ S and here comes the third FZ from their stables, albeit under a different name – Fazer. One way of looking at this bike is just another FZ; whereas, we look at it as an indication and a signal of bigger things to come! Anyhow, we tried to demystify the new bike and here we are, talking about the pros and cons of the bike. 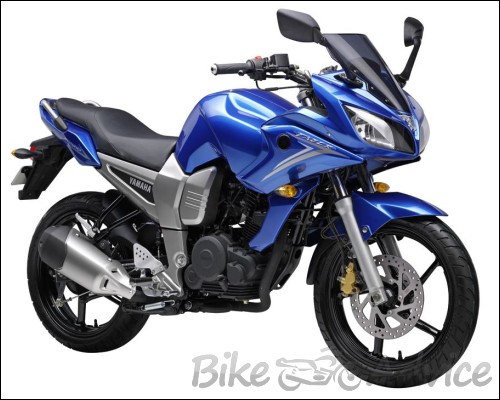 This bike is powered by the same Air Cooled 153cc 2 Valve refined mill from the FZ series which produces a peak power output of 14 Ps at 7500 rpm and a peak torque output of 14 Nm which comes at an early 6000 rpm. The engine feels stress free even after continuous journeys and performs at its best under long rides. 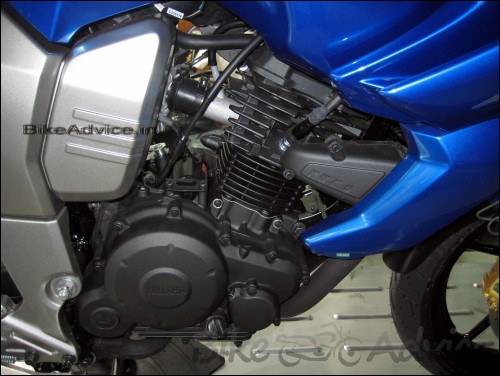 Fazer series the world over are known for their touring capabilities and this bike is just the smallest DNA of the same. With the inclusion of a beautifully crafted dual tone aerodynamic front quarter fairing, which can easily be called as the best front fairing in India currently, this bike sure grabs a lot of attention and has loads of road presence. The cowl and the visor is wind tunnel tested which protects the rider from heavy wind blasts and also makes sure that the bike is well planted even on those windy days especially on long open highways. 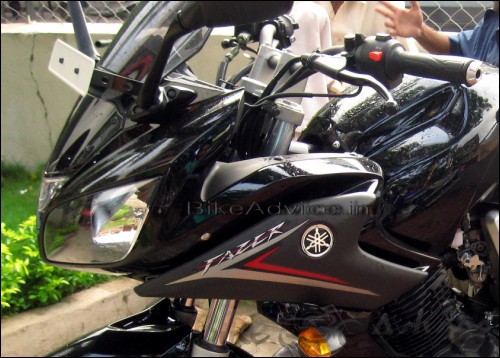 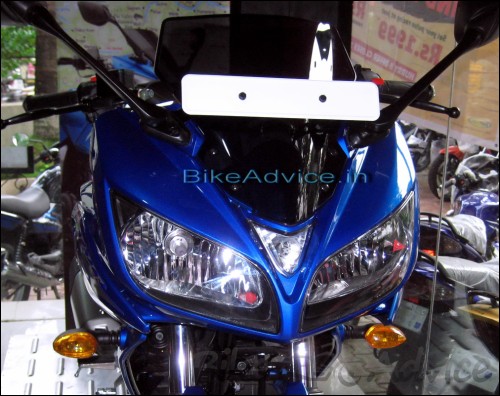 The bike has a more relaxed seating posture thanks to a little lifted handlebar which prevents fatigue and aids to the comfort for the backbone making it more comfortable for highway riding. The bike also carries the mid-ship muffler of the FZ series which concentrates weight close to the center of gravity for enhancing the control of the bike on high speed cruising. Paint job is top notch and the fit and finish exuberates typical Yamaha quality. 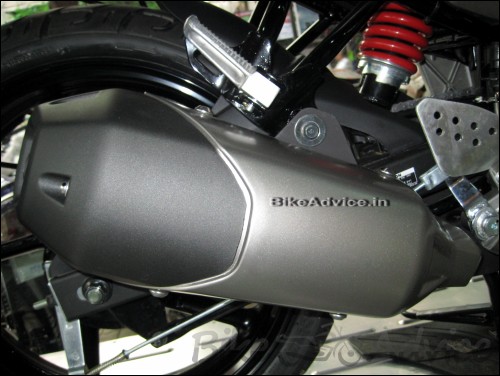 The bike comes loaded with India’s fattest and grippiest rear MRF radial tyre (140/60-17) mated with a 100/80-17 for the front for acute cornering and solid grip on any type of tarmac. 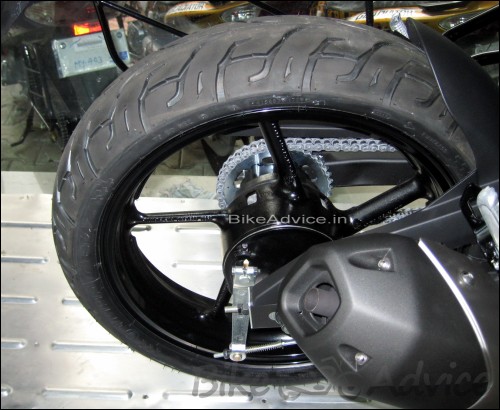 The bike is also loaded with a 7 step adjustable Monocross suspension of the FZ series which aids to the stability of the bike in a huge way and makes the bike a potent and stable performer. Yamaha has done away with the two tone seat cover for the Fazer. The bike now sports a carbon pattern all black seating skin and the seating is cushioned adequately to give one of the better and comfortable long rides. 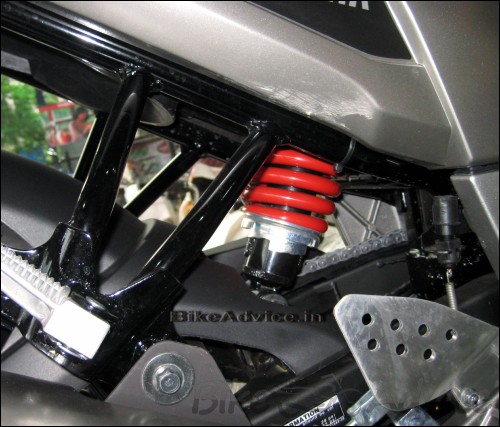 The bike also gets the All Digital speedo console which Yamaha calls as Full Liquid Crystal Display which has a tachometer, speedometer, apart from the regular tripmeter and indicator lights. The yellow backlit display looks awesome especially during nights with and with the visor hindering direct sunlight; it is also sufficiently visible during daylight. 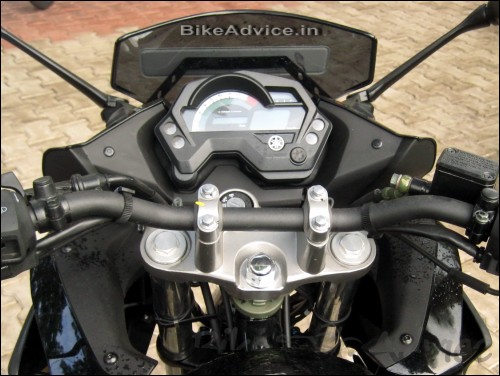 The bike has been revamped with a new graphics pattern which has Fazer written on the headlamp with a designer sticker job along with the Yamaha logo and the tank has been kept absolutely naked which makes it look even more muscular. The side panels have ‘Yamaha’ written on them which looks a bit odd with the rear panels getting the ‘Midship’ logo. 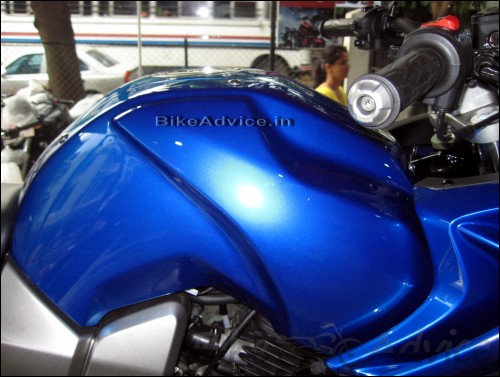 The bike also gets fairing mounted, new designed, well contoured, slightly pointed rear view mirrors which not only look sporty but also enhance the view of the back road. The bike also gets loud dual horns which are an all-important accessory on highways to keep the huge machines known of our presence. 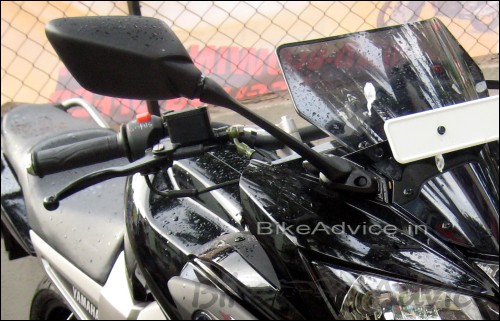 When I went in for a ride of this bike, I was amazed at the scintillating looks of it and inadvertently, they instilled a sense of a big powerful bike in me. I sat on the bike and that feeling got even stronger but as soon as I came back after riding the bike, I was disheartened at the lack of power this bike generates. The sheer lack of pulling power made me feel craved for a bigger engine on this otherwise good machine. 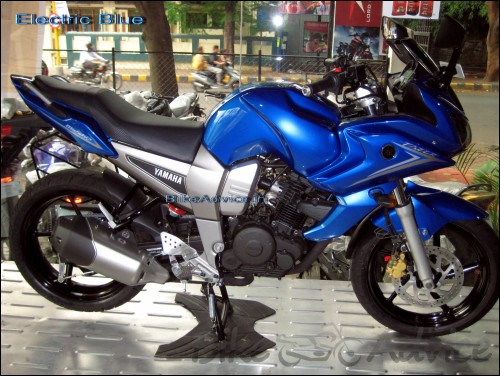 Remember, it’s the looks that deceive; otherwise, if you look at it as a 150 cc engine, the power is adequate and does its job well. The lack of power is more evident because of an increase of 4 kilograms which make the bike a 141 kg monster. All this comes at a price tag of an expensive Rs. 80,741 on road Pune. The bike would be available in four color options – Electric Blue, Midnight Black, Lava Red and Flaming orange. Black easily stands out of all the color options and the bike is a treat to watch in full black clothes. 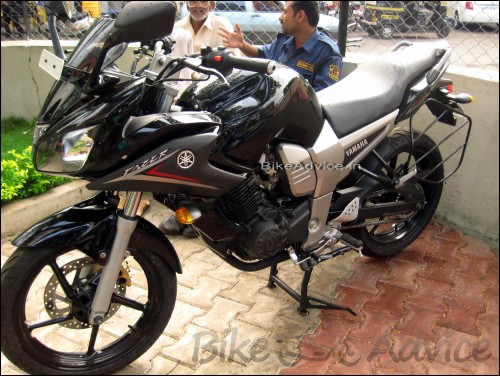 BikeAdvice Verdict: Go for the bike for the awesome looks it offers, exclusivity factor which it will boast off (because of the expensive price) and the ever so reliable Yamaha brand else we have much better bikes (sporty tourers) available in the market at similar prices.

What is your opinion about Yamaha Fazer?