It was 6th of October 2011, just four months ago, I woke up that morning all excited yet nervous, the day Had Finally come, the day I had been waiting for, for so long. When it striked had researched so much, had searched so much about her, had already rejected a few and finally chosen her to be. 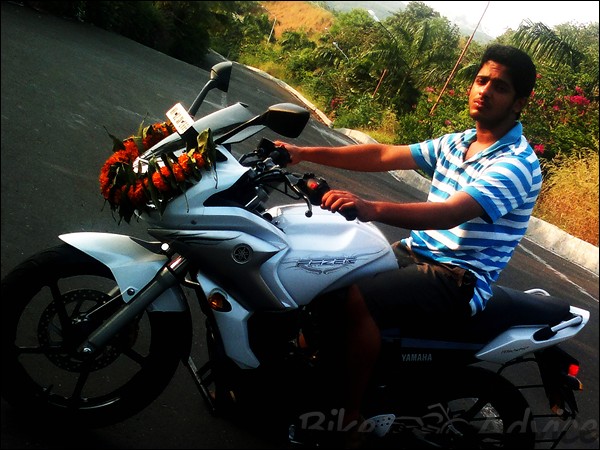 Looked at my mum who looked sheepishly at me, and wasn’t sure why was I excited, why did I wake up early and why was I forcing my dad to take me to her, she knew that I knew that she would arrive on this day, but that wait for a month over the waiting period was killing me. It was Dussehra, and my Mom had Scheduled the date to be on that Auspicious day, My dad went further into makin the day auspicious by setting up a time for delivery.

Never had I Eaten my food as fast as I did on that day, finally me and my dad sat in our car and went ahead to get my beauty. I remembered the Day When I actually thought of getting myself a bike was after my dear old Activa, owned by my dad broke down while riding and I had to push her for around 3kms to get to my house.

And while in the car a Unicorn passed by, my first choice, wanted a Japanese machine for myself and so after trusting upon Honda Activa, it was Honda Unicorn, Booked it from Panvel in January 2010 to reduce the waiting period by 3 months which came down to 9 then, but then over the next 4 months dad decided to increase the Budget, and that’s when the search for a Meaner machine Began. 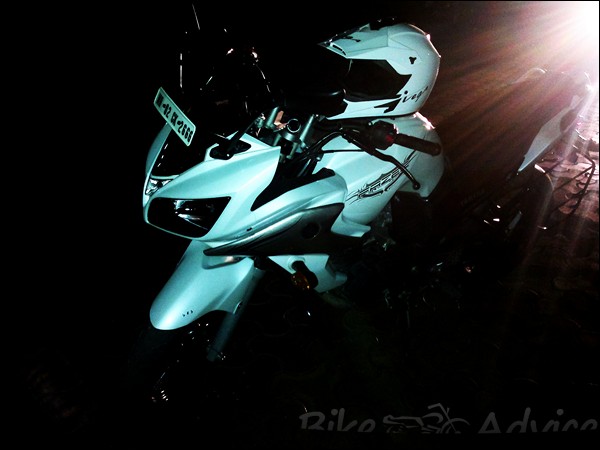 Research, forums and tests of Yamaha FZ-S, Fazer, Apache RTR 180 and Pulsar 220, but Japanese Machines is what I wanted then zeroed on FZ-S, went to the showroom where I was now going to collect her from, and that’s when my eyes fell on the White Yamaha Fazer, how beautiful it looked gleaming in the sun, the White and silver with the new graphics and the Fazer Graphic placed on the tank made her look wonderful, my dad immediately asked the price of this Beauty and well booked it while I was still admiring her color outside the showroom.

And Well there were no more changes even though it crossed the budget a bit but no compromise could have been made for this beauty, but there was one problem, the delivery date, the bike was going to be in the showroom within a week told the sales guy, n my mom told them keep her in the showroom we would collect it on the 6th of October, Dussehra, Damn I said, the bike would be in the showroom all paid for and I get to ride her a month from then.

So that’s why I was so excited so happy and so escatic about this day I had uselessly and hopelessly waited for this day, the “haath laga par muh na aaya” situation was finally gonna change. I got out of the car, and walked through 10 other people who were awaiting their bikes arrival, and there along with a few 10 FZ’s and FZ-S’s stood alone my babe, My Fazer.

Got the Paper work done and from then till now its been a hell of a Ride. The Japanese as I knew build the most durable strong and powerful bikes in the world and well the Fazer proves it. The looks of the bike have taken cues from its 1000cc variant and well I have noticed a lot of fazers but the White ones looks a lot like its big daddy. 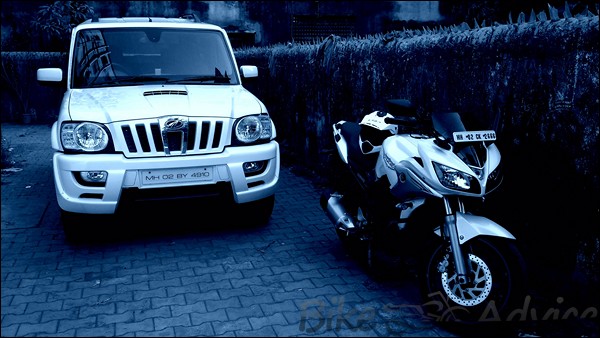 The bikes a tourer and is meant to be cruised but, a pull on the throttle and the bike zooms to great speeds in no time, without much of engine noise or vibration, the power of Yamaha gleams through the sunlight while riding this mean machine. Never got the opportunity in its four month old lifespan, but I know she will just prove all the points which Yamaha says in later years. Wont be explaining the Specs and details but can tell what I think about the bike.

Yamaha name stands for performance, The bike being a cruiser and not a racing machine gives out enough power on low vibrations and engine noise. The bike Cruises beautifully around the speeds of 60-70 on highway. The bike feels the best in performance when driven on the 5.5k to 6.5k rpm reaching the speeds of 90kmph easily, after which it becomes a drag to reach 110, the maximum I could achieve was 115, but the bike still had something left in her. While Cruising the bike in the speeds of 4.5-5.5krpm feels the best. The bike makes no noise and the engine feels the happiest here. The bike is fun to ride in the 3rd gear, smooth is the word, bikes have a certain special gear and for Fazer it’s the 3rd.

Though I don’t know much about this area, but would like to tell you that the bike Owns here, the bike is designed in a way to keep the air pressure move away from the bike, and the face of the rider, thus making it an easy cruiser also the downforce acting on the bike is excellent keeps it stuck to the road, so its not just the tyres which do wonders.

The bike handles beautifully while cruising on highways as well as through the city traffic, the bike is light in weight and so can be easily cut through traffic. The long handlebar makes the bike comfortable to ride and even new riders find easy to curve it. The fairing at first can be a problem making it look as if it cant go through gaps or turn a 360 in a small area, but it does, and one gradually understands it.

The seats are pretty comfortable, even for pillion riders, one can slip a bit on the sloping pillion seat but, on which bike does that not happen, the riders seat gives the bike a sporty look and the well placed foot pegs make sure that one doesn’t hide the looks of this Babe.

Overall Look of the Bike

As said picks up cues from its big daddy, the Fazer 1000, but has the body below the fairing of the FZ series. The bike looks all Macho and young, and the dual eagle eye lamps give an sportsbike kinda look to the bike. The bikes Newly placed Graphics and new color variants have made the bike and state of the art kinda machine. The Color I like the most is White as I own it.

Other then White the Black and silver looks great. The Fazer sticker on the Tank makes the bike look more filled than its predecessors. The Yamaha logo emblem on the side fairing panel and the back of the bike gives the bike a full new meaning. And the looks that one gets on the white model are excellent. Always remember people never look at you coz your face is covered with a helmet it’s the bike wooing the chicks n jaw dropping the males.

A no buy if you think about fuel efficiency, buy a splendor instead. The bike gives a decent 37-42kmpl. But given the performance and the feel of the machine it’s a Buy Factor.

Price is always the main factor. If you are a fan of cruisers and non naked bikes this ones for you and spend that lil bit more to be content for your life. The Bike costs around 86,000/- on road in Mumbai, but the bike is worth every penny. There are options like Apache RTR 180, Pulsar 220 in this price range, but if one needs durability and performance trust the Japanese. 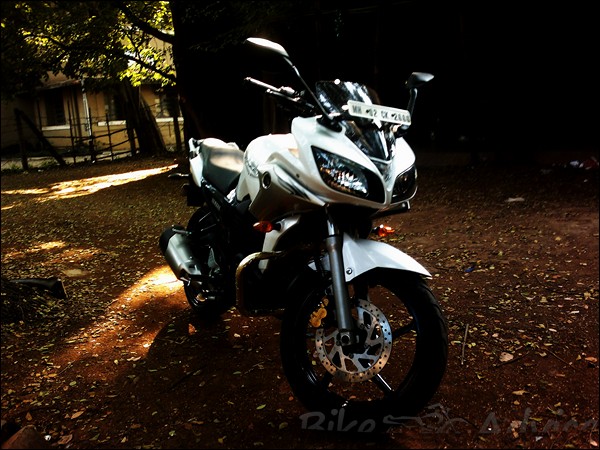 The bike is for those who still believe in the old school cruising long distance biking to be the real thing. If your looking for racing machines its not for you. It’s a value for every penny spent and so if your planning to buy in Cruising spirit well what are you waiting for Run To The Outlet Book It. And those who own it, well ride safe, be safe.

P.S. I am still awaiting a call from The Honda guys in Panvel about my booked Unicorn its been a year and 3 months now.