Yamahas are known for their racing inspired bikes all across the globe. The R series of bike is considered to be the ultimate machines preferred by bikers to quench their passion. Then as time passed, they became synonymous with naked machines as well. The small versions of these 2 categories of bikes are available in India in the form of YZF – R15 and FZ series of bikes. 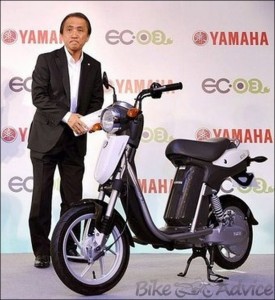 But across the globe, Yamahas are also known for their power scooters. The TMax scooters with their 500 cc engines are capable of racing against a bike in a few cases. How would the scooter category see a flip in quality if scooters like this forays into India. Let’s go a step ahead.

Besides power bikes and scooters, there is another category that Yamaha had forayed into. It is the least preferred mode of city commuting in India. Kudos to you if you said it right. Yes, it’s the Electric commuter segment. Named as EC – 03, this model is presently on sale in Europe.

For a country like India, fuel prices keep rising every now and then, an electric commuter  should be the best preferred mode of transport. But, that’s not the case owing to its designs and cheap plastics used. Also, no major two wheeler manufacturer except TVS has come up with electric models. This is where this segment lacks its punch.

What if these electric commuters enter India. Yes, it might happen soon that the road will be dominated by Yamaha commuters. Mr. Jun Nakata, Director of Sales and Marketing, India Yamaha Motor (IYM) told PTI, “For rising fuel prices, electric bike is a good option. Currently we are selling electric bikes in Japan and Europe. There is a possibility for the Indian market for introducing these products”.

Thought he company is likely to concentrate more (as of now) on new models of bikes in India, these electric commuters might enter India at some later point of time. Also, romours say that this commuter might be India- specific in all aspects including design, performance and power.

He also said that a scooter concept forIndia is getting ready in Japan and the work is in process out there.

When asked about the company’s plans for the scooter segment, Nakata said, “We are preparing to enter the scooter market. The product is under development in Japan and it will be an India-specific product”.

Taking about its plans for the current year, India Yamaha Motor National Business Head Roy Kurian said, “Every year we launch new products. This year we will introduce two new bikes and some variants of the existing models.”

Without giving any detail of the new products, he said the firm was consolidating its position in the 150 cc segment.

Regarding its sales figures, Kurian said, “Last year we sold 3.7 lakh units, including exports of 1.2 lakh units. Our target this year is to sell 40-50 per cent more than that of last year”.

Also, the company is expecting to capture 10 per cent of the Indian 2 wheeler market in the next 3 years.

How would Yamaha’s yet to come scooter and the electric city commuter fare in India. What have you gotta say about it’s new products which would roll over a period of time. Leave your comments below.