Ever since the iconic Harley Davidson came to India and priced their bikes aggressively, people have been more than accumulating monies from whatever sources they can to own one. In what is considered to be a bike for scribbled tattooed cowboy hat clad muscular daredevil hunks, a female joins the race breaking all those stereotypes! 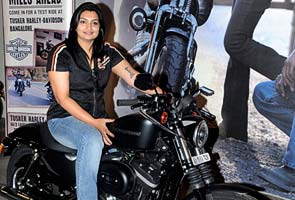 Sheeja Mathews, who works as an HR at a Bangalore based firm, has been riding another icon- her husbands bloody fast Yamaha RD350 for the past 10 years. As she puts it, she felt it’s high time she upgrades to a bigger bike and the very idea of expensive Harleys was born and a sparkling Iron 833 was zeroed in on.

Sheeja is a mother of a 7 year old son (a would be biker..?) and confirms that she had to shell out 8 lakh rupees for the bike in total out of which 20 percent were shared by her husband. Sheeja plans to take her new priced possession to office at least once a week. Also a drag racer, Sheeja loves bikes over cars.

With the growing income of Indian households, examples like these make the oncoming of these coveted brands to India do make us a gleaming star in the world economy.