The month of September this year has proved to be a month of great potential for the major Two wheeler manufacturers in the Indian sub continent. On one side, we’ve been hearing about the constant interest rate hikes which actually should have had an adverse effect in the automobile sales. But what happened in the Indian market is exactly the opposite of it. 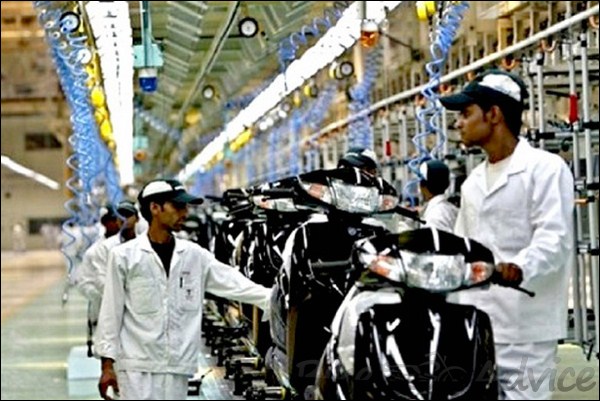 Companies have posted a record sale this month when compared with the sales figure of the same month, previous year. Indian major makers, which include Hero MotoCorp, Bajaj Auto and TVS have all posted record sales in September 2011. The reason that is attributed for this record sales is the fact that customers who are interested in buying small cars are turning towards buying new two wheelers, owing to the constant and continuous hikes in the fuel prices.

The company to have posted maximum sales figure is the Hero MotoCorp, which is doing amazingly great in the market following the split from its Japanese ancestor – Honda. Hero MotoCorp has sold 5.49 lakh units which accounts for a stunning growth rate of 27 per cent. Volumes for the first six months of the fiscal have crossed three million units.

Rejoiced about this best figure, Mr Anil Dua, Hero MotoCorp’s Senior Vice-President for Marketing & Sales said, “Sales have been regularly in excess of half a million two-wheelers per month since the formation of our new company. We expect this momentum to continue into the festive season, and our plans are in place to meet the market demand.”

To recall, World’s largest two wheeler manufacturer Hero MotoCorp which is a New Delhi-based company closed the second quarter (July-September) of 2011-12 with sales figure of 15.44 lakh units, which in total accounted for a growth of 20 per cent when compared with the corresponding quarter, the previous year.

When it comes to the second major player in the market – Bajaj Auto, the motorcycle sales grew at 18 per cent which also broke its own record. Note that Bajaj Auto has only motorcycles in its portfolio and no scooters in it.

TVS Motors, South India based company and the 3rd major player in India when it comes to two wheeler manufacturing crossed the 2 lakh unit mark accounting for a domestic sales growth of 16 per cent. Also, TVS’ exports were up 27 per cent with a sales figure of 25,973 units.

Mr Abdul Majeed, auto practice leader at PwC said, “People who want to buy small cars and can’t hold back their purchase are going for two-wheelers instead because of the poor market sentiments. Also, many people who already have cars are buying scooters and bikes for their personal daily trips, so that they can save on higher fuel expenses. They tend to keep the car only for family trips.”

This festive season will account for moiré sales for these companies as companies will begin to offer continuous discounts and offers. As a result, all that is gonna happen is that ‘Customers are gonna be spoilt for choice’ which is exactly what we need right?