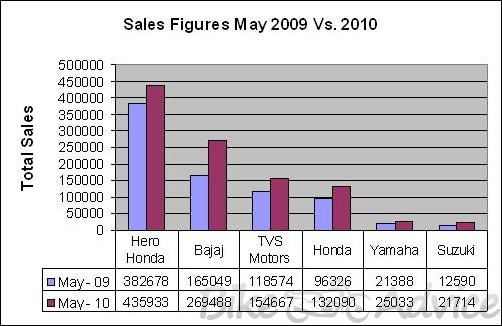 The robust performance of India’s largest two wheeler manufacturer continues after the battery shortage affected around 50,000 bikes last month. It in fact seems that these units got added to May’s share which helped Hero Honda achieve highest ever monthly sales of 4,35,933 units. These figures are 13.92 percent more than 3,82,678 units which Hero Honda managed to sell during May 2009. May’s figures are 20,796 units greater than the previous best sales performance of 4,15,137 units set in August 2009. Hero Honda also revealed that May became the 17th consecutive month where the company has sold more than 3 lakh units and the 4th month where company has recorded sales of 4 lakh and more units.

Pune based, Bajaj Auto, has also been doing wonderfully well burning the sales chart month after month. Bajaj posted a huge growth of 63 percent in May 2010 by registering total two wheeler sales of 2,69,488 units over 1,65,049 units they managed to sell in May 2009. The most important part is the fact that Bajaj’s concentration on more profit yielding Pulsar and Discover brands is paying off big time. These two brands constituted 68 percent of total sales with Pulsar brand chipping in with 75,974 units and Discover registering 1,07,076 units in the overall sales for the company. Bajaj also registered growth of 64 percent in exports where they registered 95,964* units as compared to 58,682 units in May 2009 (* these figures also include 3 wheelers). Bajaj’s latest masterstroke Discover 150, which is a 150cc motorcycle launched recently at a shattering price, registered 12,377 units during its initial month of sale. With the ever increasing sales of Bajaj, we might not have to wait for too long to see Bajaj cross that 3 lakh magic figure.

TVS camp also had a big reason to smile as they registered an increase of 30 percent in overall two wheeler sales for the month of May 2010. TVS managed to sell 1,54,667 units as compared to 1,18,574 units sold in the month of May last year. Domestic sales also saw an upsurge of 27 percent gaining from 1,07,439 units in May 2009 to 1,36,621 units in May 2010. Independently, motorcycle sales grew by 27 percent as TVS registered sale of 67,906 motorcycles as compared to 53,495 units in Mat 2009.Scooters displayed a phenomenal growth of 42 percent as they registered 31,884 units when compared to 22,486 units TVS sold during the corresponding month of the previous year. Exports have started generating consistent growth for the company as they managed to carve out 62 percent increase in sales at 18,046 units as compared to 11,135 units exported in May 2009. These figures reflect the positive outlook of the company and the launch of Jive and Wego has definitely helped the company bringing in more volumes.

Honda Motorcycle & Scooter in India (HMSI) did not release an official press release to the public this month. According to SIAM’s (Society of Indian Automobile Manufacturers) report, HMSI motorcycle sales jumped 52 percent from 36,200 units in May 2009 to 55,110 units sold in May 2010. Scooter sales also saw an upsurge of 28.03 percent and stood at 76,980 units in May 2010 compared to 60,126 units they recorded in May 2009. Considering the figures provided by SIAM as total sales for the company, HMSI sold 1,32,090 units in May 2010 as compared to 96,326 units they managed to stock out in May 2009. The impact of Twister and revamped scooters along with the launch of Dazzler is clearly reflecting in the growth pattern for the company. And we expect these figures to move up with each passing month.*All 2009 figures are calculated based on the percentage growth and scooter + motorcycle sales are considered total sales of the company for the full month of May 2009.

Suzuki Motorcycle India Pvt Ltd, fully owned subsidiary of Suzuki Motor Corporation registered a humongous growth of 72 percent as they registered total sales of 21,714 units in May 2010 over 12,590 units they managed in May 2009. Suzuki’s ploy of gradual and continuous expansion is paying them great dividends. As always company attributed the fantastic response to their flagship products, GS150R in motorcycles and Access125 in scooters. Suzuki is also planning to launch new products in India concentrating more on entry level bikes to boost volumes after displaying their prowess by launching the premium supersports GSX100R and versatile Bandit at very competitive price tags in India.