Volkswagen’s surprise concept for the Shanghai motor show wasn’t a car at all. The German automotive giant joined a growing number of car-makers that are considering branching out into motorbikes when it uncovered an all-electric two-wheeler called the E-Scooter. 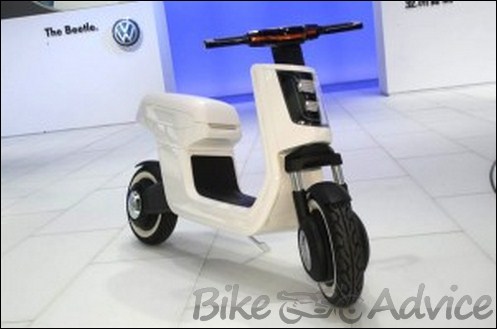 Weighing just 20kg without batteries and powered by a 350-watt motor, the E-Scooter has a range of about 40 miles and a top speed of roughly 30mph. Power comes from a nickel-metal-hydride battery that’s small and light enough to be removed and charged indoors.

But as VW’s director of design for China Simon Loasby explained, the bike’s range could easily be extended with a lithium ion battery for markets that demanded it – as could the bike’s performance, by a 700watt motor. Regenerative braking, which doesn’t feature on the initial concept, could also be added in later to boost range.

“Our idea was to come up with a solution for affordable mobility in megacities like Shanghai, and to give people who’ve never owned a car a way into the VW brand,” Loasby said. “The E-Scooter isn’t covered in VW badges, but you know it’s a VW from the shape of the frame, the detailing of the head- and taillight, and the premium quality of the product.”

VW is evaluating several business models for this compact battery-powered motorbike. One of them would see customers rent bikes out of city ‘hubs’ located outside of train stations, shopping centres and at key business parks. An electronic key card registration system would allow operating bodies to limit top speed for younger riders.

But selling the E-Scooter outright hasn’t been ruled out. “There are already 20 million electric scooters a year sold in China,” Loasby said. “Typically they cost about $500, and they’re quite cheap, disposable things. There’s no reason why we couldn’t fit premium features to one – LED lights, glossy plastics, a nicely trimmed leather seat and a sophisticated trip computer – and still charge less than $1000 for it.”

VW is considering trialling a fleet of E-Scooters in a still-to-be-confirmed Chinese city during 2012. If the scheme is successful, a worldwide market launch could follow.

VW also has plans to start a rental scheme for its E-scooter, wherein one can buy a prepaid ‘Mobility Card’ and pick up an E-scooter from one of the many hubs in major city areas such as railway stations. Malls, etc. The scooter can be used and later returned to any other hub in the city, thus ensuring faster and better commutes, apart from helping in keeping the environment clean. The manufacturer plans to start the rental scheme on a trial basis in China next year.