Guess what! Ducati, the ever best sporting brand in the world, has unveiled their latest technological advanced sports bike for 2011. The new beast is called the Ducati Desmosedici. Ducati has made it clear that Valentino Rossi will ride on this new monster for the Moto Gp 2011 championships. The unveiling of the machine was done at Wroom event in Italy. According to Ducati, both Valentino and Nicky Hayden (team mate) will have the privilege to showcase their skills on the new monster. Below is the video that showcases this demon.

Well, Ducati has certainly left no stone unturned as far as tuning the latest machine is concerned. Mr. Filippo Preziosi (boos of the Ducati racing team) said that the main and the important change is in the engine as the engine has been internally and externally redesigned to attain better power and torque. Further, the aerodynamics of the bike have also been worked on to reduce drag, enhance top speed and reduce the lifting of the front wheel. Ducati has tried to invoke stability by working on the aerodynamics.

Team boss Filippo Preziosi further said that the company has also been working on new carbon fiber chassis for the 2011 season. The chassis will help the bikes attain different rigidity, torsion and the swing arm with varied stiffness. He further said that the company is working on anti-wheelie and traction control because those factors play a major role in performance of the bikes. 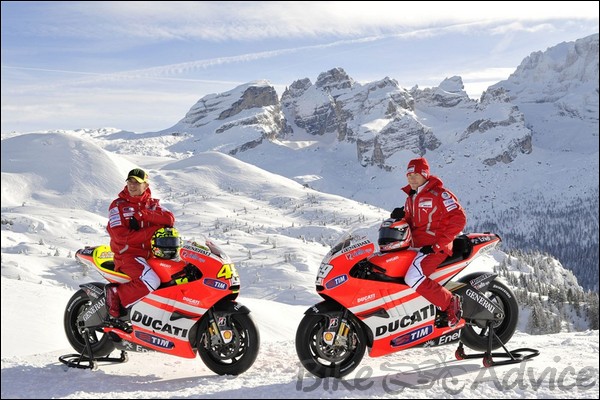 Furthermore, Ducati is happy with a new addition to their team in the form of Jeremy Burgess (man behind the success of Honda and Yamaha). At last Ducati is sure that this 2011 is going to be Valentino’s year and he will make other teams a run for their money.