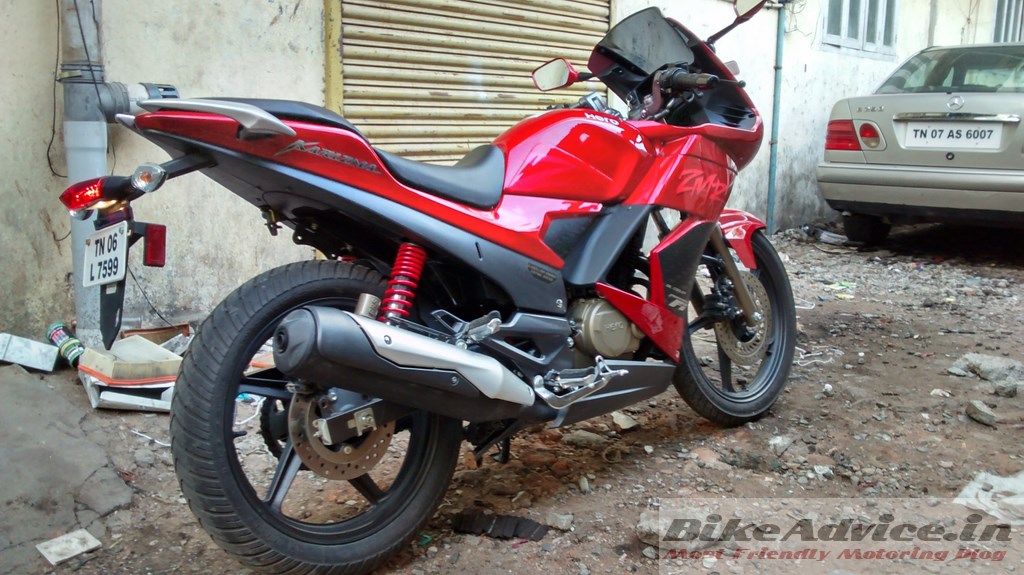 Our avid reader Kashif has shared this user review of his new 2014 Karizma ZMR. You can also share your bike’s reviews to us at saad@bikeadvice.in.

Hi, I am Kashif and working in the Software industry for the past 3 years and happen to own the new 2014 Karizma ZMR and wanted to share with you the reviews about the bike. 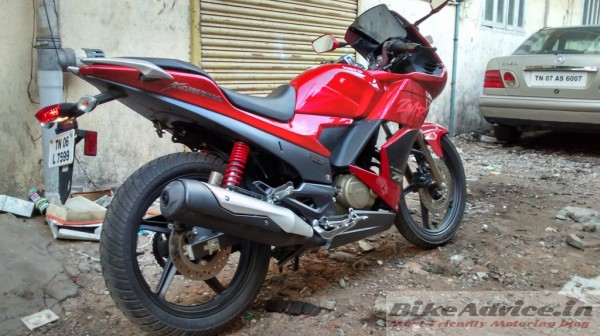 I have been driving a five year old Hero Honda Hunk and was looking for an upgrade for the past 6 months, First when Hero showcased the ZMR in September 2013 and the video of the ZMR in red I had made up my mind to go for it, though it didn’t look that good in the pics ,I kept waiting for it to be launched at the auto expo in Feb 2014 but when the launch was delayed I began searching for other bikes. The contenders were the following.

Duke 390 – Awesome vehicle for highways and racing but for city use it’s a pain, the tall gearing and the stiff suspension doesn’t help for city use.

Pulsar 200NS :- Its almost 2 years old now, and the pulsar 200ss is still some time away, I didn’t find the bike to be as torquey as the Karizma twins and wasn’t as smooth as the Karizma either.

Thunderbird 350:- Well it felt a little heavy and I realized that a royal Enfield can be bought later in life, but in your mid 20s you need to drive a nice flashy bike that can outrun other things on road.

New Karizma R:- Well I personally liked the analog console on this and its really aggressively priced at 93k on road in Chennai which is just a few thousand more than the Yamaha Fazer and other premium 150cc bikes, but still didn’t feel as substantial as the ZMR. 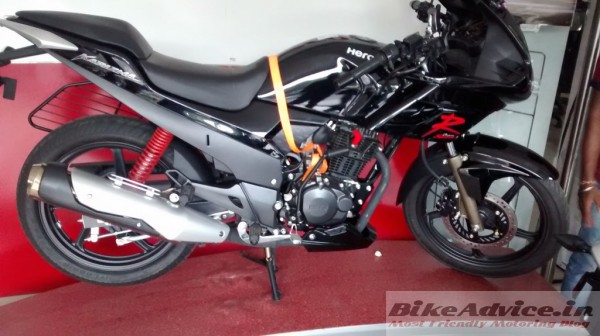 New ZMR :- After a quick test ride I realized that this is the bike, people on road yelling Dai pudhu ZMR da (look the new ZMR) to their friends was enough to convince myself to get the bike. It was butter smooth and the acceleration was also awesome. The bike costed 115283 on road in Chennai and that’s comparatively cheaper than the R15 and CBR150 by approx 15k which are low on displacement and power compared to the ZMR. 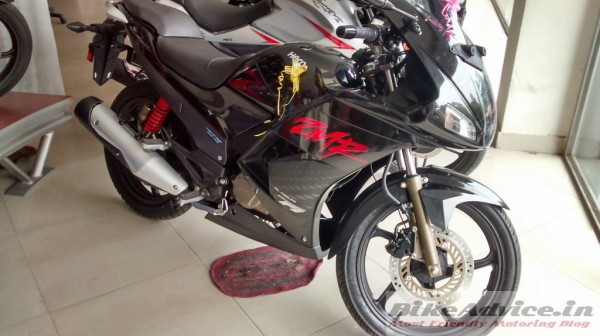 ZMR was offered in three colors on the website then but of late the orange color has been added, the white one was never in contention because of the maintenance factor, but it was a tough call between the black and Red ZMR. Finally I decided to conduct a poll amongst my family and friends and the red ZMR won by a narrow margin….so the Blazing Red ZMR it is. 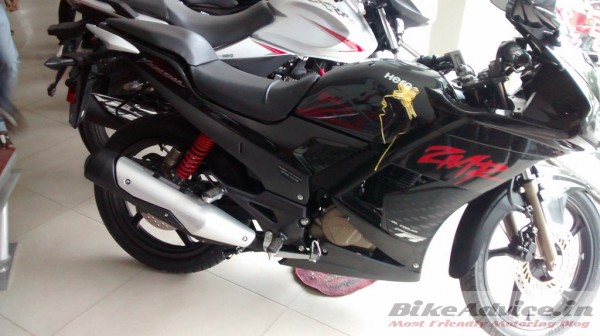 I had a tough time calling up all the dealers in Chennai and finding out whether they had the Red bike, finally found one in a showroom which is 20kms away from my house. These were the first set of bikes dispatched by Hero and I took the delivery of the Blazing Red ZMR on June 14th. The delivery process was smooth and I thought this being the first ZMR to be delivered from their showroom they would take a few pics and do a little key handing over ceremony but nothing of that sort was done and the mechanic parked the bike outside and said enjoy your ride and the delivery was over. 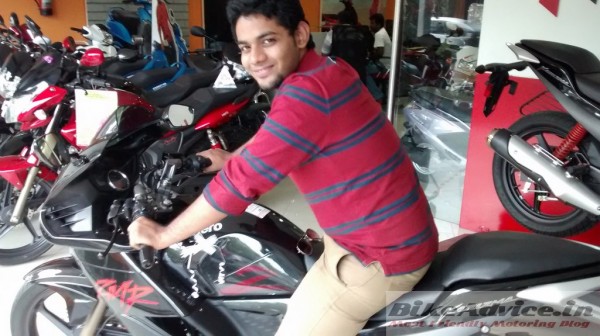 Though the bike didn’t look good in the pics, it looks substantial and huge in real world, the tail part is the best and never seen before, the front part takes some time to grow on you and the fairing seems to gel well with the bike. I personally like the look from the rear, the fat rear tyre and the raised back seat give it a big bike feel. The DRL’s are really good to look at in the day and night. 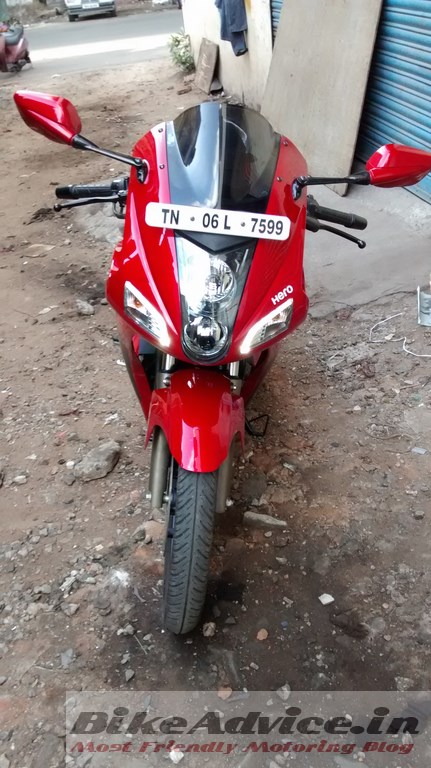 People accuse Hero of copying the design from every other manufacturer but they have just taken design inspiration from EBR 1190RS. Check below. 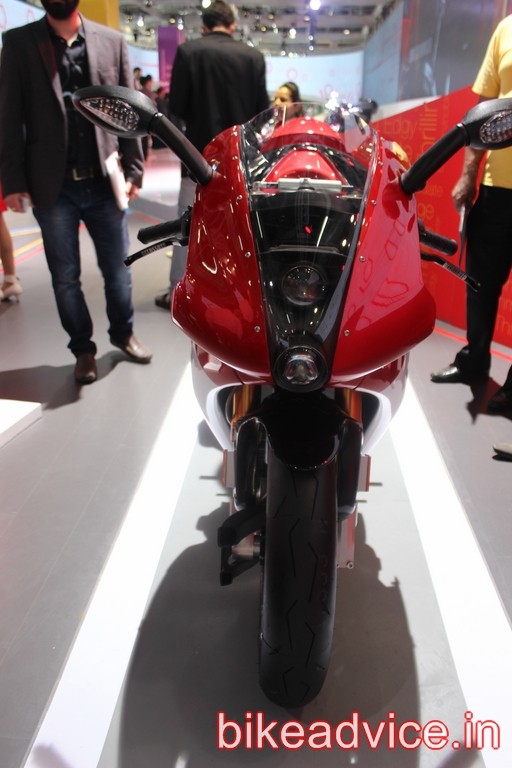 The rear looks an exact copy of EBR though the front is a failed attempt to make it look the same. 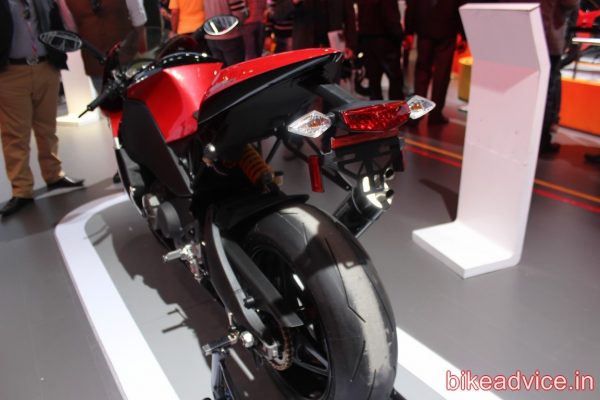 Check out the fat rear tyre when parked beside the splendor. 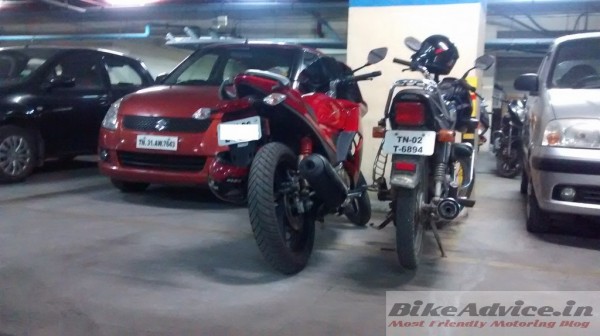 If you are turned off because of the looks of ZMR let me remind you that a bike is bought not for the looks but for the ride it offers and trust me out of all the other bikes I considered I found the ZMR to be the most comfortable.

When I had first gone for a test ride on an empty stretch of road what surprised me was the awesome torque available across all rpms, the bike is really tall geared and hence the best for touring on highways, The suspension is soft and handles bumps nicely. 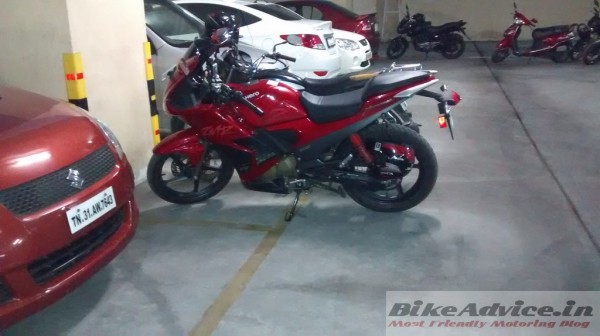 Many complain that Hero should have introduced a monoshock at the rear as many 125cc bikes also offer that nowadays but changing the chassis to incorporate a monoshock would mean more changes to the design and more cost and the new bike would have easily costed a lot more, this way they have managed to price it almost the same as the outgoing variant. 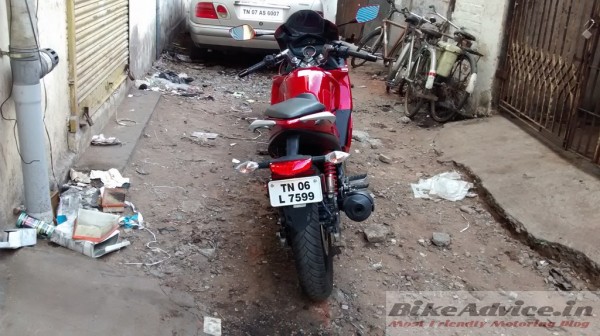 The bike at 157 kg is not light, but once you start riding you don’t really feel the weight. It feels light and the clip on handlebars are easy to turn, The earlier bike weighed 159 kgs and I managed to bring the weight of my bike down even further by removing the saree guard as it struck like a thorn in my eye and it was pretty heavy at 4 kgs, so now my bike is even lighter than the Karizma R.The bike feels steady at high speeds. The rear seat is comfortable and the pillion sits very high. 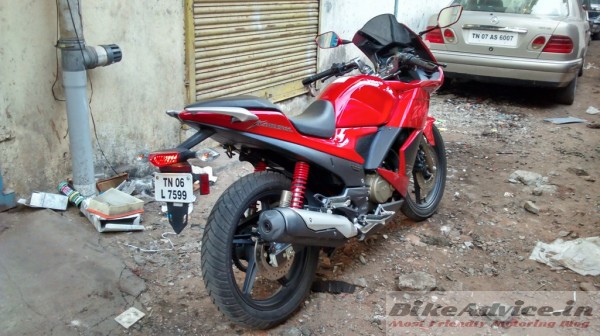 Well this is the major change that has happened in this bike. It produces 20 bhp at 8000 rpm than the earlier which was 17.6bhp at 7000 rpm, and torque has also been bumped from 18.35 nm to 19.7nm. Hero could have changed the redline of the bike as the redline comes in early at 8.25k but this bike also produces max power at 8k rpm so a 8.25k rpm redline doesn’t make sense. 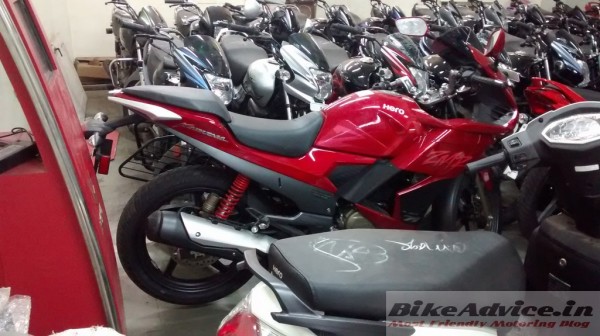 The bike is under run in so I haven’t tested the 0-60 and 0-100 numbers but it surely feels fast and I trust hero with the 0-60 in 3.6 sec timeframe. However, I got tempted once and opened the throttle on the highway and the bike was doing 126kmph. The vibrations were too much to handle at this speed and the motor was screaming at 8k rpm. The bike is new so I guess the motor vibrates profusely, but have been resisting myself to 80kmph on highways.

This is one question that everyone keeps asking on road, at signals, at parking lots because the bike looks really huge, the ZMR is fuel injected hence it doesn’t have the petrol on off and reserve switch that can be used to calculate mileage, and the only method to find out the mileage is by doing tank full to full method.

At first service the mechanic advised me to maintain at least 5 liters of fuel as these are fuel injected bikes and should always have fuel else it will lead to air block, you can’t ride these till the last drop of fuel like how we drive carb bikes.

I have managed to get around 37 to 40 in the city and hopefully that it will go up by 3 or 4kmpl once run in is completed. Mind you these are fuel efficiency figures of a normal 150 cc bike in the city.

Well talking about the instrument cluster, it’s one of the best I have seen till date on an Indian bike. The tachometer is almost like the one on the FZ but that looks more toyish. The welcome and goodbye messages feel nice, they can be programmed to display a 6 digit username that can be used in the welcome and goodbye messages, programming that is easy and can be done with the help of the manual.

Then there is a side stand indicator, the message shows up on screen and blocks the odometer while driving, there is an FI Unit malfunction light in the dashboard and technically that should never glow LOL

Apart from this there are many other sensors like tilt sensor, air intake sensor etc etc.

A word has to be said about the Real time mileage indicator, I feel it really helps in squeezing out the last drop of fuel in the bike, though it shows irrelevant figures when driven really hard like 2.7km/l and while going downhill without accelerating it jumps up to 175km/l. The manual states that it can show anything between 0.0 to 199.9 kmpl. Cruising at speeds of 60 kmph the RTI shows 65kmpl and it decreases as speed increases, cruising at 100 the RTI shows 42 km/l and at 125 it shows 32km/l.

The first free service was done at 705 kms on the odo, had problems with rattling of the fairing that were sorted out. The service was done in front of me and it took approximately two and a half hours, the mechanic completely stripped my bike and explained to me all the details about the engine and the sensors available. 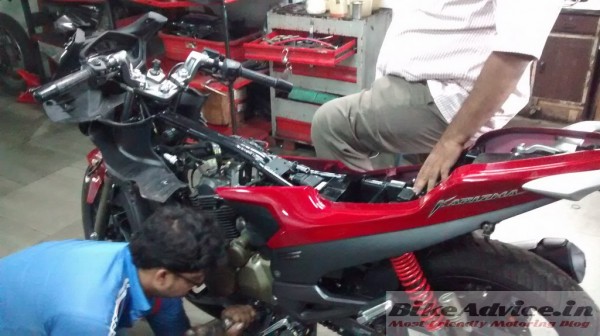 He disconnected a few sensors and showed me how the FI unit malfunction light glows. The light will glow at a specific time after switching on the bike for a specific error, for eg if tilt sensor is disconnected or not working then the orange light at the dashboard will glow at the 20th second from switching on the bike. The ECU is located below the seat . 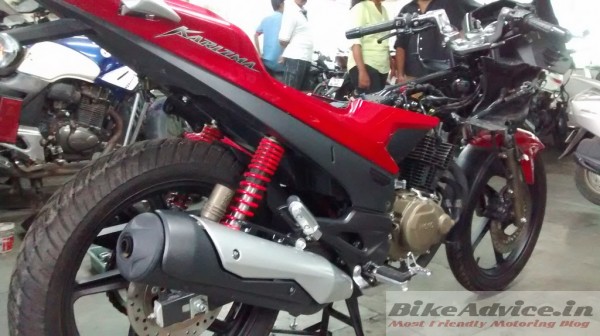 Well what can you upgrade on a bike that already has all the goodies. Will just add a K&N RC 1060 performance filter when the bike is due for Second service and the mechanic during first service told me not to get it installed somewhere and to bring it to him and he will install it as some changes have to be made to the fuelling or ECU in order to accommodate the filter and to see an increase in performance.

Why should anyone buy the Karizma over any other bike?

It’s a proper 223 CC bike not a 150 cc motor trying to match the speeds and numbers of a higher displacement engine. The drivability is superb in the city due to the awesome torque available, the bike cleanly pulls from as low as 35km/hr in 5th gear to its top speed, it gives a big bike feel and won’t be as common on the road as the R15 and CBR and hence you are sure to grab eye balls.

Anyone planning to get a new 150cc bike can put in another 10k and get the Hero Karizma R (It looks really killer in Red and Yellow) which sells at 93k and those looking for a fully faired bike have the ZMR for 1.15 Lac which is still considerably cheaper than the R15 and CBR150R.

Check All Bike Reviews on BikeAdvice