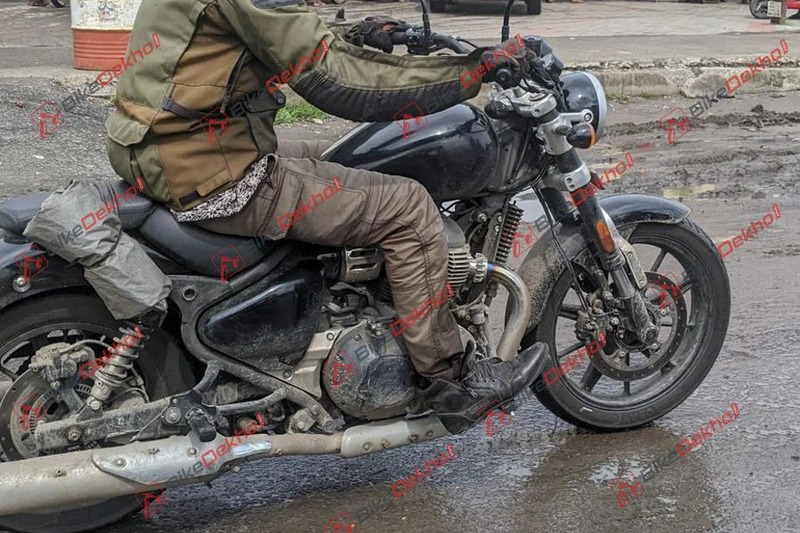 Royal Enfiled will be launching their true cruiser motorcycle based on the 650 cc platform in upcoming weeks. And by now us writer and you readers have seen the bike in test prototype form and, in one instance, top-spec chrome trim as well.

Though it was covered in Black cloth to protect it from the rainy weather it was being tested in, it gave us a clear view of how the top-of-the-line Chrome trim of the Super Meteor/Thunderbird 650 cruiser will look like. It also sported cruiser soft-saddle bags mounted on either side, giving it the aesthetics of the true mile-muncher, just like the Indian cruisers.

However, the latest spy-images shared by an online portal again feature the dull Blacked-out test prototypes of which we have become quite familiar, annoyingly enough.

Once again the long true-cruiser stance is confirmed for the upcoming bike, further highlighted by the forward-centric foot controls, very similar to the current Royal Enfield Meteor 350.

As for the mechanical hardware, it boasts USD forks at the front coupled with dual shock absorbers at the rear – a departure from what we’ve seen on the current Royal Enfield bikes up until now. The braking duties are handled by a big single-disc setup at both ends.

Additionally,  the Super Meteor 650 will be powered by the staple 648 cc, parallel-twin, air/oil-cooled motor that we’ve seen on the sibling Interceptor 650 and Continental GT 650 – boasting 47.6 PS and 52 Nm. The bike was also spotted testing abroad with accessories earlier this year, so safe to bet that RE will be offering a slew of accessories, including touring-friendly ones.

It is expected that the new Royal Enfield Super Meteor/Thunderbird 650 could be launched at the Rider Mania 2022 scheduled for November. The pricing expected for the true-cruiser could be upwards of Rs. 3.5 Lakh (ex-showroom).