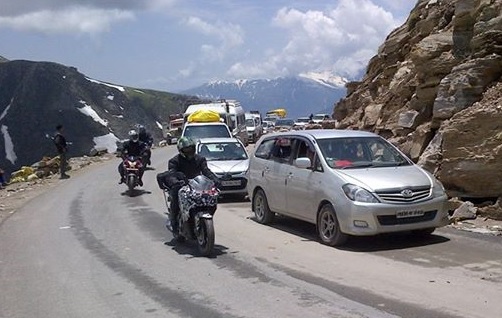 The Bajaj Pulsar family, one of the best-selling motorcycle series in India is all set to get a major revamp in the line-up in the near future. The 200NS, probably the best looking Pulsar ever, sharing its engine with the KTM Duke 200, is to get a new fuel management system.

The Fuel Injection, replacing the age old carburetor, will help in improving the throttle response and will also probably make it a little more fuel efficient.

Bajaj has already launched the 200NS FI in a few international markets like Turkey but there is no word about it for India. The fuel injected Pulsar 200NS has been spied testing in India again, along with the faired Pulsar 200SS or 400SS.

This convoy has been snapped at Rohtang and shared by Mohit Agarwal on Facebook. Spotting of these bikes at these heights clears that Bajaj is carrying out the high altitude testing of the upcoming motorcycles.

*One older spyshot without camouflage

The Turkey 200NS FI churns out exactly same power and torque output and the Indian version may also continue with the same 23.5 horses.

Coming to the faired Pulsars, this is a step closer to lead us to believe that the Pulsar 200SS will also be fuel injected, obviously if this is the Pulsar 200SS. It can also be the bigger Pulsar 400SS which Bajaj had showcased at the Auto Expo in February. According to the information we have, Bajaj should be launching the 200SS and the 200NS FI in India sometime very soon.