Have you ever wondered why the TVS Victor is still not removed from the TVS Motors’ homepage?  The Victor which once dominated the Indian roads and gave a fierce battle to the Hero Honda Splendor and all the other bikes in that segment is rumored to re-enter the Indian soil with a slightly refreshed looks. 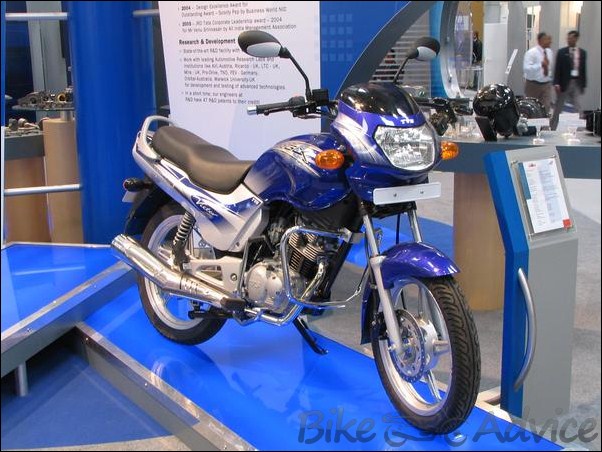 Though, the bike is still in the website only in list of bikes for the international range, one should remember that TVS Motors has explicitly said that it is planning to launch a new bike and a scooter by the end of this year.

As per the spy image published in June edition of Autocar, it is pretty similar to old Victor GX. The ‘Scooty’ brand is pretty synonymous with the scooter segment in India, as against Victor for commuter bikes. I could still remember God of Cricket – Sachin endorsing the Victor bikes, to be still more specific, the violet coloured one. The colour also added up to the success of the bike in India. It was new and fresh at that point of time when commuters had not much colour options to buy and own.

Also, TVS can put its collars up for having designed and brought out the first indigenous bike – the Victor brand. For all those who think it is the Pulsar, please correct yourself, for it’s the Victor. Though, the reasons for downfall for this bike is unidentified, it certainly is a reliable and a low maintenance cost incurring bike ideally suited for city commutes. Following the Victor GX 100 was the GLX 125, the 125cc bike from the same Victor brand which again did not go well in the Indian bike market.

The company certainly needs a good bike to launch immediately owing to the flop of the much hyped Flame DS 125 and Flame SR 125. There might be even plans for the Victor to replace the Flame.

But, we are highly unaware if the bike in the spy pic caught in Chennai is for the domestic market or for overseas. But, if my guesses go right, it should come to India late this year and might slowly replace the Flame at a later point of time.

Sorry to say that we are unable to publish the spy pic published in Autocar at this point of time owing to the unavailability of the same in digital from, but we assure you we’ll soon come up with the pic for our readers.

Do you personally feel that this is the right time for Victor to re-enter?  Will it dominate the market again as it did years ago? Post your views and comments below.

Thanks to 2wheelsindia.com and Autocar India