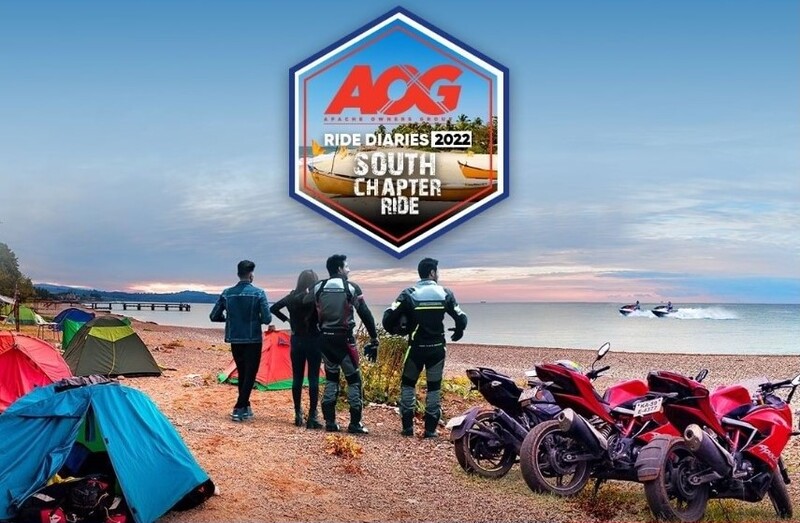 TVS AOG South Chapter happened over three days and rode through twisties of the Ghats and besides the Arabian Sea….

So, TVS announced the successful conclusion of the 4th Chapter of their Apache Owners Group (AOG) South Chapter in the beautiful city of Mangalore, Karnataka.

TVS describes the Apache Owners Group (AOG) rides as the ‘Celebrating motorcycling and riding brotherhood’. The TVS AOG began 4 years ago and, presently, is active in 65 cities across India consisting of over 1 Lakh members. TVS AOG community boasts to have completed over a thousand rides till date.

The 4th edition of the AOG South Chapter took place over three days, starting on 8th and ending on 10th of April in the city of Mangalore, Karnataka. The event saw nearly 120 Apache series owners come together to ride through the twisting and engaging roads of the Western Ghats and a scenic ride by the vast Arabian sea.

The First day of the event saw the AOG riders taking part in high-adrenaline motorsport activities along with having ample time to spend by the beachside. On the Second day, the TVS AOG South Chapter took a group ride to the scenic Maravanthe beach.

The AOG group rode through coastal roads which run parallel to the Arabian sea. During the afternoon came the adventure-filled experiences full of water sports activities, followed by a fun interactive session with TVS experts and officials.

On the same lines, Bajaj also began their own ‘Dominar Rides’ event to promote riding and touring in our country. Their first excursion took 15 Dominar riders for nearly 2200 km tour from Mumbai to Rann of Kutch – led by Sarath Shenoy.