I still remember seeing the ad of TVS Star City featuring Indian Captain Mahendra Singh Dhoni with his long hair. It’s been years since then, with India winning almost every major trophy. So has been the journey of TVS Star, which was early TVS Star City. 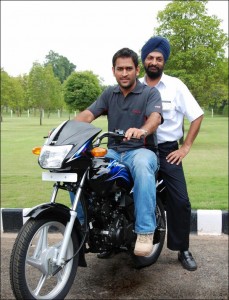 The bike was launched in 2004 with TVS’s whole new strategy of coming up with a feature packed bike, but in the economy class. The bike was priced competitively which even remained as the cheapest motorcycle in the country for a while, competing with the Bajaj Platina.

With just two years after the launch of the bike, the company signed MS Dhoni as the brand ambassador of Star City in the year 2005. TVS Motor Company has announced that it has crossed the 3 million mark in cumulative sales of Star brand of motorcycles.

“We signed on successful Indian cricket captain M S Dhoni as brand ambassador in 2005 and even today he is the face of the Star brand. We consider him to be a strategic fit with the brand as he reflects the brand image of being strong, reliable and a symbol of achievement” H S Goindi, President, Marketing, TVS Motor Company said.

He also said, “TVS Star was introduced as part of the company’s customer centric approach. We have always made concerted efforts to incorporate maximum customer expectations while introducing technology superiority. The brand philosophy of being a complete value for money product has been well accepted by our customers. Constant upgrades with new features, styling and refreshing graphics at regular intervals has helped us achieve this milestone. ”