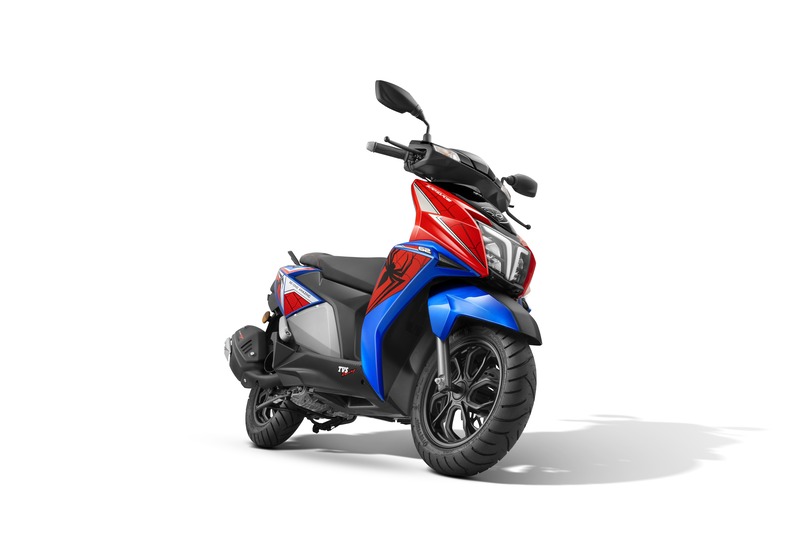 TVS has introduced two new superhero inspired NTORQ 125s to their existing SuperSquad edition – The Thor edition and the Marvel Spider-Man edition. The SuperSquad version of the scooter is a resultant of the collaboration between TVS Motor Company and Disney India’s consumer product business and was launched in October last year. Initially, it was offered in three variants – Black Panther, Iron Man and Captain America.

The TVS NTORQ 125 SuperSquad Thor edition and Marvel Spider-Man edition embodies the key characteristics of these superheroes and are decked-out with the graphics inspired by them.

The inspiration even extends to the TVS Connect App which comes with customised UI inspired by these superheroes. Even the TVS name in the background of each app screen is re-created in the respective superhero character traits.

Mechanically, these new variants of the scooter are absolutely identical to the regular road going variant. That means they continue to be powered by the same 125cc engine which produces 9.25 BHP of power and 10.5 Nm of torque.

Talking about features, the scooter has an LED headlamp, digital instrument display, Bluetooth connectivity, voice assist function and dual ride modes (Race and Street), among many others.

TVS’ website misses out on the Iron man edition which may signify that it has been taken off from the line-up.