The Chennai based two wheeler manufacturer TVS Motor Company  has announced that its president for marketing H S Goindi has resigned from the company. 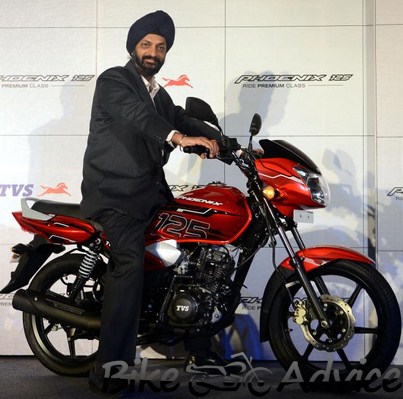 In the company statement it said “H S Goindi, President Marketing, TVS Motor Company has expressed his desire to pursue interest outside the company and as such has requested us to relieve him by March 31st 2013.

It is said that the management of TVS Motor Company has also accepted H S Goindi’s resignation by acknowledging the efforts put in by him during his period bringing great success to the company it said. The statement also said that “No immediate replacement has been announced”

Having said that it is to be noted that TVS Motor Company had witnessed a 3.70 Percent decline in it’s total vehicle sales in February at 1,65,696 units compared to the 1,72,061 units sold during the same month last year. The total two wheeler sales of the company dipped by 4.79 percent in February 2013 by 1,60,895 units compared to 1,68,996 units during the same period last year.

With all these figures rendered, I’m afraid that this decline in sales figures is still going to rise if TVS Motor Company does not actively come up with what the majority wants which is in our case a simple 220 to 250cc bike which I don’t find it really hard for a racing pedigree like TVS to bring it out.