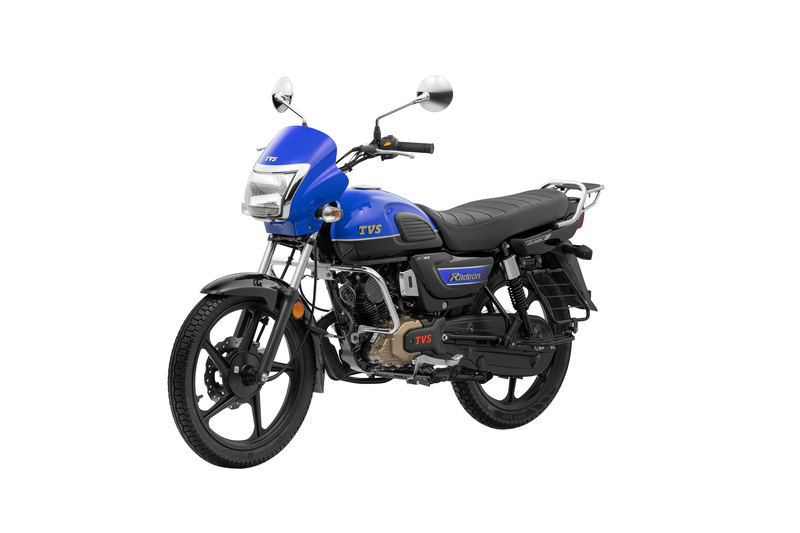 2022 Radeon price for the entry level variant is about Rs 3000 more than the outgoing version. It gets RTMI, top speed and many new features..

So, TVS Motor have launched ‘2022 Radeon’ to take on the new tech-loaded Hero Splendor+ XTEC.

The New TVS Radeon has been introduced in 4 different variants –

The most important addition the new Radeon comes equipped with is a multi-colour reverse LCD instrument cluster which is a first-in–segment feature.

Additionally, TVS have also equipped the new Radeon with their Intelligo technology –  which aids in fuel saving for the rider. This feature switches off the engine after it’s left idling for a few seconds and it can be started again by a slight twist of the throttle.

The new Radeon remains untouched in all other aspects and retains much of its characteristics from the previous versions.

It is powered by TVS’s tried-and-tested 109.7 cc, air-cooled engine that produces 8.08 HP and 8.7 Nm of torque. The engine is assisted by a 4-speed transmission system.

Not Retron, Not Zeppelin, TVS’ 6 July Bike Could be Called As…

Based on a single cradle frame, the new Radeon rides on 18” alloy wheels at both ends that are suspended by telescopic forks at the front and dual springs-shocks at the rear.

The Braking setup comprises a drum at both ends for the drum-variant while the disc-variant gets disc brake hardware only in the front wheel. The new Radeon comes equipped with a 10 L fuel capacity.