TVS Motors has recently rolled out a bigger brother of its award winning Apache series, yes the RTR 180! The much waited and anticipated APACHE RTR 180 which was being developed under the project code known as Menace was launched recently creating a big revolution in the world of racing. 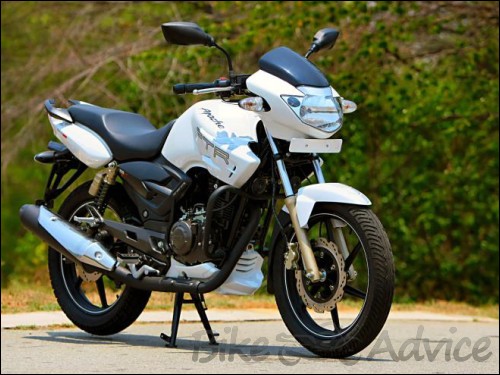 The bike is just stunning with it’s refreshing new looks the engine and not to mention the new ergonomics, the bike takes it all with pride.

Bull Horn Grab Rails: RTR is always known for it’s uniqueness in each and every detail that is being fused on to the bike, and the main highlight is the split grab rails that are shaped with Bull Horns in mind, will give the bike an aggressive look and the bike gels with it adding style to functionality.

Engine Fairing: With this part alone one will be able to understand how much of detailing has gone into making of this bike, the design has some aggressive curves that cools the engine rapidly and allows the heat to be dissipated as well as adding style. Not to mention it over does its job of saving the engine from elements that can knock the engine while riding.

Graphics: The bike also comes with all new graphics to be precise the Legendary Racing GT Stripe that adds best complements to the bike when looked from all the angles it’s an absolute turn-on to every biker, also the RTR decal that is put partly on the air scoop and the tank. The RTR rims also have luminous rings that distinguish men from the boys.

Forged Brake Lever: The RTR employs one of a kind of Forged Brake Lever and Gear Lever Set which is much lighter in construction when compared to the normal ones add functionality with great sense of styling.

Removable Rear Fender: This feature is one-of-a-kind that is first in India where the bike employs a rear fender that acts as a Mud flap that can be removed giving the looks of a Super Bike rear fender with safety reflectors attached as TVS never compromises on safety.

Lightweight Alloys: The RTR 180 employs all new stylish light weight alloys that are designed specifically for this bike reducing the burden of weight when it matters only about speed. Light weight doesn’t mean that these will wear out fast but these are tested extensively for durability too giving the bike a sturdy feel in all terrain conditions.

Ok, let’s pack the above features for now and let’s peep into the essence the bike that possesses:

The bike is totally a tech savvy and some of the most innovative and advanced features includes:

Over Square Engine: That’s the technology implemented in RTR 180, an Over Squared engine that churns out 17.3 ps @ 8500 RPM with a max torque of 15.5NM @ 6500 RPM is just mind blowing. With these values the bike is just a screamer and can easily reach top end without losing out its breath. To the stunters out there the bike can pull really good wheelies in 2nd gear and that is the amount of low end torque this bike possesses.

Roto Petal Disc Brakes: The bike employs ROTO PETAL DISC BRAKES for both front and rear that can put all the power to a stop when required. With 270mm front and 200mm rear ROTO DISCS the bike never hesitates to stop and also for people who wants to know about this advantages of ROTO DISCS, it’s been proved that these discs dissipate heat faster than the normal discs and provides a fool-proof braking.

Clip-on’s: The bike comes with all new wider Clip-On handle bars wider than the old RTR models that provide the rider with great posture for riding as well as adds a tinge feel of racing as these are the standard equipments in the Superbikes and in here it also comes with adjusting feature that can be adjusted for the reach of the rider according to his height.

Rearset Foot Pegs: The Bike employs sporty lightweight foot pegs that are placed in the rear set giving the user the racing feel and also for the techs this design contributes to the bike’s power to weight ratio.

Wider Tyres: The Bike employs the widest rear tire in the entire RTR series with a size of 110/ 80 that can put all the power on to the ground without hesitation at all.

With all the above Features and Technology that no other bike has, the new RTR 180 is truly a racing pedigree that is waiting to unleash its power. Taking a test ride of the bike, the bike sounded and felt really amazing and doesn’t have the old boring complaints of its ancestors and you guys know what, yes, the Vibes. TVS has this time did their homework well on this issue and has bought the levels of Harshness and Vibrations down and this adds to the new feel of the bike wanting to accelerate faster and faster and coupled with a carburetor there is always some room for further improvements which can’t be done in the case of an FI. The bike accelerates faster and cleaner than the 160’s but not as clean as the FI. But who cares when it’s a screamer, the bike screams past against all the bigger competitors with ease and it surprises me each and every time when I think of that.

Although the RTR-FI and RTR-180 share the same 0-60 timings, from 60-100 and above the total scene with the RTR-180 is all game. It accelerates faster than the fastest leaving others behind and the top speed that I was able to achieve was 136 Kmph on the Speedo console and I still felt that there was lot more juice left to extract from the engine, but being a new engine I didn’t want to rev the bike hard. The bike also comes in an all-white scheme that distinguishes the other RTR’s from the 180 and personally I like this color as it looks like an angel while parked and a white devil when ridden. The other color options available are Yellow, Grey and Black which are also equivalently good and I would say it’s always a personal choice and go with what your heart says…

The all new RTR 180 with tons of positive feedbacks and features is surely a value for money than any other bike in this segment and I would surely not hesitate to book right away for the thrill it offers.