Hi I am Ajinkya from Nagpur. I own a White TVS Apache RTR 180. It was 9 months back when I was going to buy a bike I got to know everything about bikes and did a lot of surveys.
Final verdict came out The Pulsar 220. But at the day of the purchase one of our neighbors son got an accident and a few more on pulsars then we changed our decision to buy the second option of the RTR180. Till now it has been a mixed reaction. 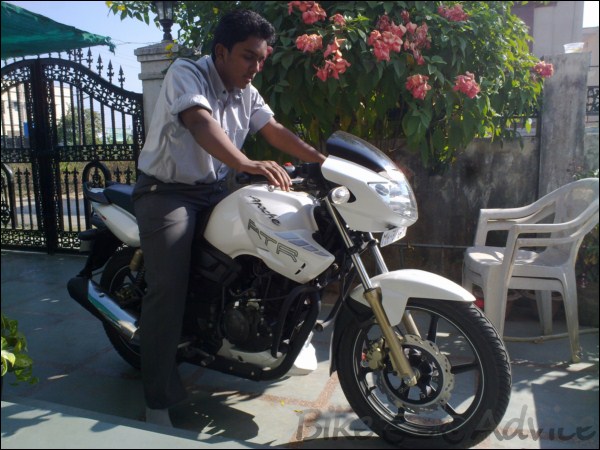 I took the delivery of my bike at night and the service men delivered it to my home as i didn’t have my driving license. The next day i found many problems in the bike. The handle clock was one sided and scratches on fuel tank and silencer. I complained about it and got a new one. Now starting with the bike.

Its a true head turner anywhere. I have seen people on other bikes noticing my bike on signals, cruising, parking everywhere. Its actually a rare bike in small cities there are very few one bought. You can see children talking about the bike and most of all the questions asked about are is it legal to have a white colored bike as it is only applicable for police. 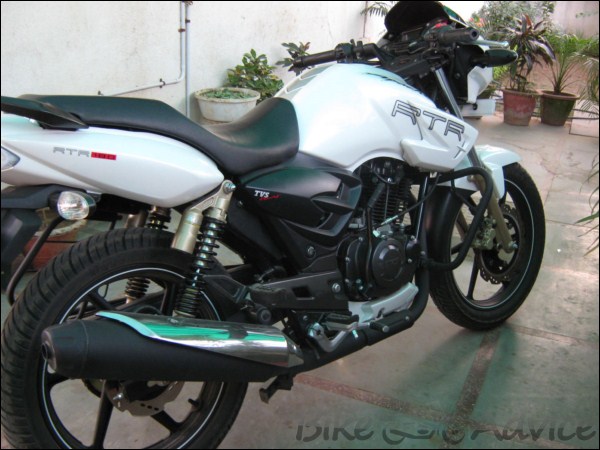 It has radium on its rims which come with the bike factory fitted. Its shiny white color shine even without Teflon and doesn’t look dirty till days as compared to black color bikes. It also has a engine cowl which is not available in the pulsar.

The main point of a racing bike is its performance and the TVS Apache RTR 180 doesn’t disappoint you at it. It is the next bike after the R15 which can beat the Pulsar 220 and the Karizma in place of pick up and speed. It takes very short time for the Apache to get to 100kmph nearly 200m or more. considering it is only 137kg as compared to the R15 which is 131kg. If you manage to remove the leg guard, sari guard and the mirrors it will be more similar to the R15 power to weight ratio. 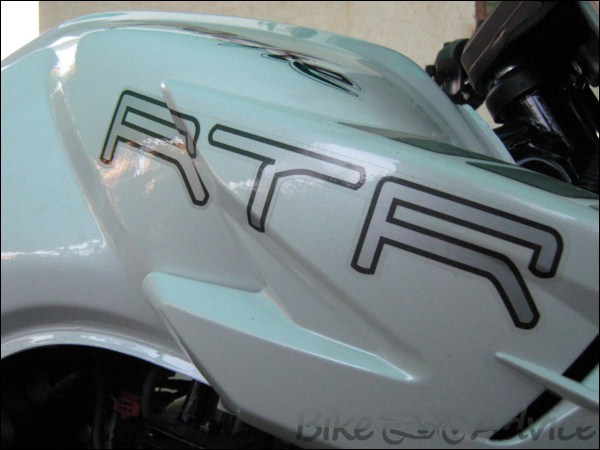 Considering the bikes 17.3ps of raw power and the over square engine it accelerates very quickly to 80kmph on the city roads which is difficult for other bikes as they lag the racing throttle response. The engine is rev happy as considered to other bikes which are limited to 9000rpm the RTR can be rev up to 12000rpm. I installed a K&N air filter considering my riding environment which is pretty polluted due to the undergoing construction so that i can protect my bikes engine.

After fitting the K&N I got more attention on the road as I drag my bike from the signal or while overtaking, the huge grunt of my bike takes the attention of other riders. If you felt that I am over stating my bike then try a fifth gear roll on from 60kmph to the top whack with the pulsar 180 or 200 you will notice the difference in performance. TVS claims the top speed is 124kmph but I think they meant by if you have just purchased the bike. After run in you can take the bike above 130 easily. I did 132kmph when my bike had done just 2000km on ODO. People have done more than 130kmph, some claim to do 138kmph. At last the fuel economy as we are indians we always consider the fuel economy first it gives 50kmpl+ if you ride it gently and 30kmpl to 40kmpl if you rip it hard.

The TVS Apache RTR 180 has got the best speedometer I have seen on Indian bikes. It has a digital speedometer with blue back light and a white face tachometer. 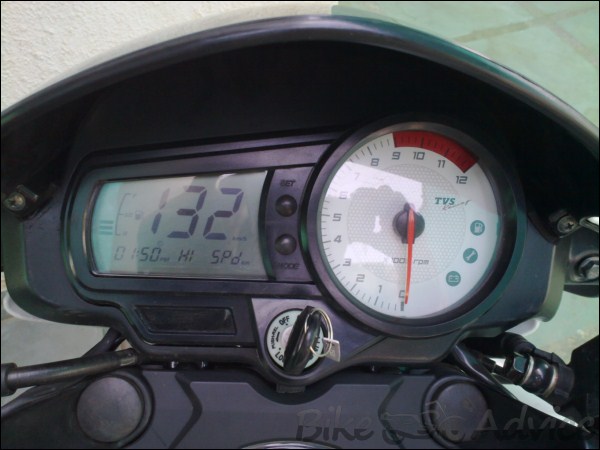 The speedometer is a adrenaline pumper on the bike, it has a very good refresh rate as compared to the Pulsar and R15, the pulsar claims a top speed of 144 but it actually does about 135 max, the speedometer is over enthusiastic. The head light is 35w bright with multi reflector and is good for night riding. As compared to other bikes the Apache has a AC battery.

It is the drawback that the TVS Apache RTR 180 has got bad tyres and are more slippery in rain as compared to MRF tyres. The tyres bring down your confidence while riding the bike but you can lean the bike in the corners like the R15. 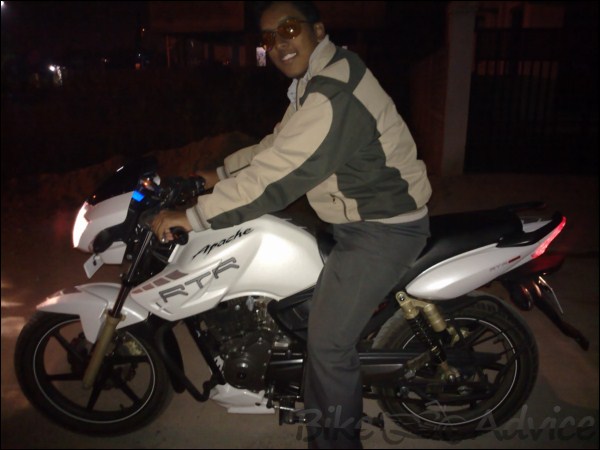 As in may case I got my fear about reading it in the reviews so cannot push my bike to the limits. It is easily flick-able because of its light weight and brakes are satisfactory on the bike. The rotary petal disc brakes are made more faster cooling than the regular discs which come stock with other Indian bikes.

Don’t trust the service station personnel blindly. You can get fooled for something that you don’t know or what is not done on your bike. On my second servicing I paid for Oil change and found out that they didn’t change the oil at all they just washed and handed my bike to me. Always go to the TVS service station for your bike not to the Sales and Service. If you want to lessen the vibrations of the bike use the oil of another manufacturer beside the TVS Tru4t oil.

As they say NO PAIN NO GAIN. If you want to own a head turner, a performer you must have to bear all the pain which comes with it. Overall the bike is really addictive both visually and performance wise once you get it going you cant stop it till you get satisfied. For Rs.75000 it is the best available option for performance and fuel economy. In other words TVS Apache RTR 180 Pain unleashed.