Hi I am Bharat from NewDelhi pursuing a bachelor’s course from IP University. Following is my ownership experience of my TVS Apache RTR 180. 14th of August, 2009 was an awesome day for me as I bought my first bike-TVS APACHE RTR 180-THE MENACE. Before purchasing this bike I had many criteria’s under which I short listed two bikes the TVS Apache RTR 180 and Bajaj Pulsar 180 UG 4.There were many confusions in my mind regarding which bike to purchase. 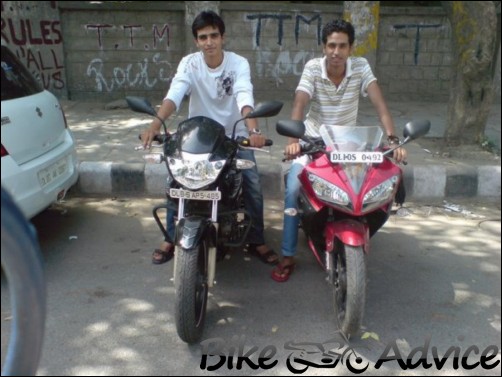 Personally as I was a big fan of Apache 160, due to its sporty posture, drivability and ease that bike offered the rider with which it cuts through the traffic. Because of all these good points I was much on side of Apache RTR 180 as it was a successor to its sibling Apache 160 and definitely it had improvements over apache 160 like improved wheelbase, improvement over vibrations and soft compound fatter tubeless tires.

I went for a test drive of both the bikes but the bike which drove me crazy was Apache RTR 180. After the test ride I was sure that this was the bike I wished for and made up my mind for this bike. I just loved riding it, therefore went for one more test drive on another day to explore my craziness for this bike and booked it in black and got it delivered in two days. First month of my bike with me was in the “running in” period which restricted me to stick the bikes needle under 50kmhr. Although I was very impatient to crack the bike in high speeds as I wanted to feel the thrill, the experience of this fast accelerating bike but again restricted myself for its own good. As my bike had its first service done, the TVS engineers told me that now I can experience whatever I want in my mean machine. 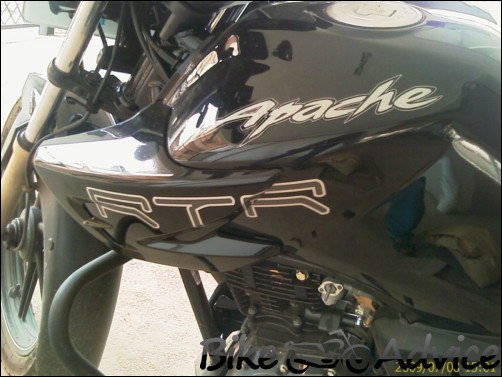 I tried to accelerate the bike to its fullest and it went off from still to 60kmhr within 4.3 seconds, thanks to its lap timer which is found only in TVS APACHE till now among all the Indian bikes. I tried to improve my acceleration figures and guess what I got 0-60 kmhr acceleration in just 3.5 seconds. I use my bike for commuting to my college that is18 kms away from my home and bike gives me a handsome mileage of 41 kms a liter. I just love commuting on my bike to college and love it when people turn around to have another look of my bike. Also Love those moments when my girlfriend appreciates looks of my bike. Here’s a small review;

Looks: It is personal choice which can vary from person to person, but according to me its looks are awesome. Tvs Apache RTR 180 gets newer graphics which distinguishes itself from its sibling Apache 160. The canister gas reservoirs for rear shocks are painted in golden unlike black ones in apache 160 that distinguishes the old from new ones. Clip-on handle bar are black in color with a dashing RTR 180 emblem in center. The best part of it looks which I personally felt was big RTR logo on its tank. New white background tachometer with backlit blue LED light is a pleasure to look in the night, these add up to give RTR 180 a much sportier look. Also to mention is its unique rear fender which adds up to give bike a sportier look and Pulsar180 which I preferred as my second option didn’t have these sporty, killing looks like RTR has. The bike is available in four shades-black, matt grey, yellow and the white one.

Performance: Now this is the segment which I admire my bike about the most. Believe me it is a very fast accelerating bike we have in India. Its lap timer feature gives me adrenal rush to test its acceleration a number of times. I achieved its 0-60 km/hr acceleration in just 3.5 seconds which is an unbelievable part that we expect from a 180 cc engine. While the pulsar 180 sprints itself to 60 km/hr in 4.2 seconds. 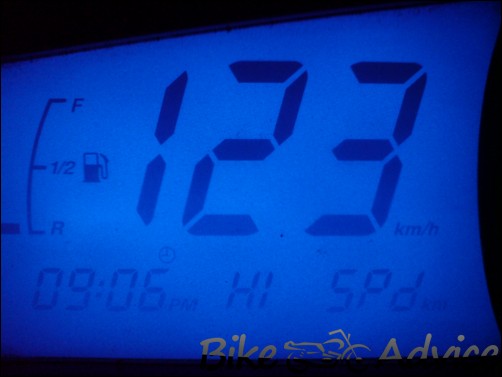 Apache RTR 180 gives a power of 17.3 ps at 8500 rpm and a torque of 15.5 nm. The new 177.4cc mill is a bored out variation of the 160cc mill, and has a longer stroke too. The new engine still remains an over square unit, but not so much as the 160. The aerodynamic air scoops add to the design plus it ensures air travel towards the engine unit to aid in better cooling and efficiency.

Ride and handling: TVS Apache 180 has a longer wheelbase than Apache 160 by good 400mm,making it more stable and confidence inspiring than its earlier iteration when leaned over. RTR 180 feels more stable both in straight line as well as around corners. The engine fairing design shows the amount of detailing gone into its development plus adds aerodynamic properties. The riding posture on the RTR 180 is forward set up one which brings a huge difference in ride quality. A pillion rider will also feel more comfortable sitting on a RTR because of its forward set foot pegs and elegantly designed unique grab rails. RTR’s specially developed race crouch mirrors provide better angle and safety besides looking great too. Do not worry about the potholes while you are riding Apache 180, as the bike is smooth in this regard and your ride will not be all that bumpy at all. Pulsar though scores a point here with its MRF nylogrip zappers and TVS Apache RTR sports the Srichakra tyres. Adorned with MRF tires and the upgraded swing arm it makes a huge difference to the handling of the Pulsar 180.

Verdict: TVS Apache RTR 180 is a bike for a  real bike enthusiast who wishes for his dream machine on a budget. I am getting a mileage of around 42-45kmpl, which is good for a 180 cc bike. The bike is too good for my daily usage as I save a considerable amount of time than traveling in car or bus and save money too. But runs like crazy, it’s so difficult to keep it below 50kmph (stipulated for first 1000 kms-running in period). Be it cornering or braking or through heavy traffic, the controlling is poised. There is a little vibration though if u r not in correct gear, u got to lower gear if u slows down. I just love my bike a lot and feel eager to race with any bike just to show off acceleration of my bike. Even if I am an apprentice in field of biking, I will definitely recommend this bike to anyone, who likes performance and not to forget this bike is bike of the year for 2010, that proves the capabilities of this mean machine and I being a proud owner of THE APACHE RTR 180 just want say YES, RACING DNA UNLEASHED.