I first thank and congratulate bikeadvice.in for its wonderful effort in bringing in so much info at one place which helps buyers to make their buying decision and also keeping us updated on the latest happenings on the Indian bike scene. This isn’t a “My bike is the best” kind of review. Rather, its a “What’s best in my bike” kind. Every bike is unique in its own way which gives the rider/buyer ample choice in the market for what they need in a bike. Some may want power, some may want mileage the most, some may want the most comfortable bike and some may need the most stylish one. Buying my first bike was really a very awesome experience. The first need in mind is Power and killer looks (along with a budget of 70k actually). 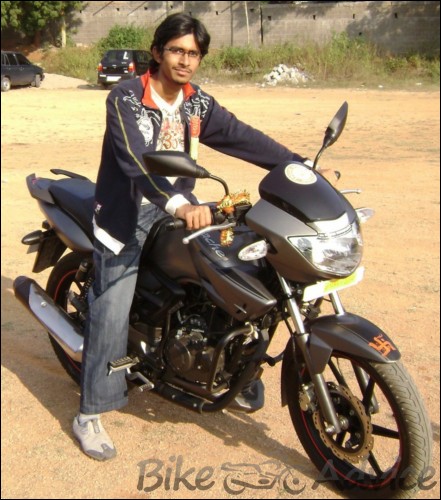 The choices were Galore, Bajaj Pulsar 150/180, Honda Unicorn, Yamaha FZ 16, Hero Honda karizma, Hero Honda CBZ Extreme, Hero Honda Hunk etc. Karizma would obviously be the ultimate choice, but it was 15k off my budget and Pulsars had already taken over every ‘Gully’ in India and are such a common sight. Least was on my mind the Apache RTR 160 because of the not so good reputation of TVS service.

The Decision: All it took was One Ride to change my mind, Just one ride. I borrowed my friend’s Apache RTR 160 one day in college and hit the highway. The bike zoomed past 60 in no time. It went past 90 in a jiffy. Even doing 100 was a breeze. The best part was the instant throttle response, true to its name of Racing Throttle Response (RTR). I totally fell in love with it. Even the handling and cornering (like a racer with the knee scraping around the corners) were fantastic. All other things like mileage, vibes, and service became secondary as the adrenaline rush was more than you can ask for from any bike in this segment. After a month long wait I finally laid hands on my brand new Titanium Grey Apache RTR 160 which is my monster. Just couldn’t wait to ride it. But I was told not to cross 50 kmph for the first 1000 kms for the engine to run-in properly. It was worth the wait though. I had not bought the EFI as it was new on Indian roads and needed more time on testing (though boasts of higher mileage and power). 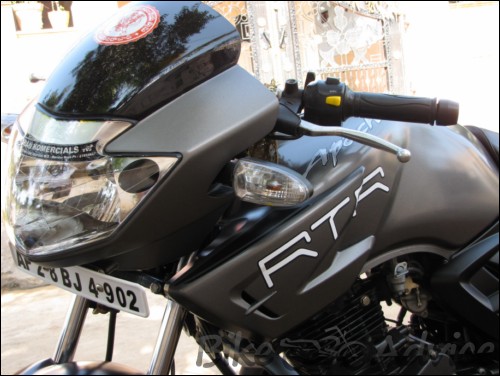 Specs and Performance: 15.2 bhp of power was more than enough for our present road conditions. The disc brakes on the Apache RTR 160 (roto petal discs) are the best in its class giving more superior stopping power and shorter stopping distance than any other bike. TVS claims a top speed of 120km/h, but I managed to do a top whack of 129km/h. Wonder how much it was more than the actual speed though. The shortest time recorder (0 to 60 timer) shows my record of 4.5 seconds. The bike can go on par with a pulsar 180 initially and can also beat it, but the greater pull on the pulsar gradually makes it go further than the apache. The vibrations on the bike are negligible for someone who needs nothing but power in a bike and ride at high speed, but you can’t expect the refinement of a unicorn in an apache. The tyres are a bit slippery not only on wet roads but also on slightly muddy surface too. This makes corners very scary. TVS must have provided wider rear tyres at least of the Apache 180’s. Wonder what reasons TVS has got for such tyres. Just wish that the racing kits of the apache which increases the power by more than 3 bhp are available in the market. As of now they are not available to commuters but only to TVS track racers. 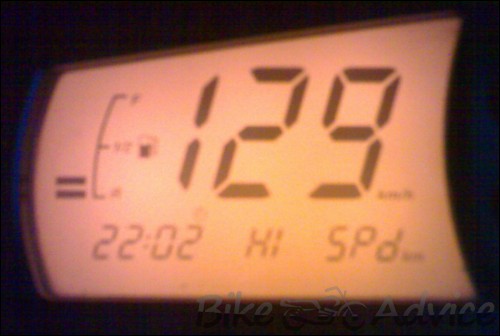 Looks: The looks of the bike are pretty amazing with mean Headlamps and split grab-rails. The rear set foot-pegs too are a boon to youngsters giving a more sporty seating position. The pillion seating is a little uncomfortable due to its raised position. The open chain needs more maintenance and regular oiling/greasing than closed drive chains. The instrumentation of the bike is the best in the segment and is good enough for touring and high speed highway riding. The LED tail lamps are sure attention grabbers. I had got stickers like the Apache 180 on the front air scoops and it surely gets head turns wherever I go. People can easily mistake it for a 180 unless they give a very close look. 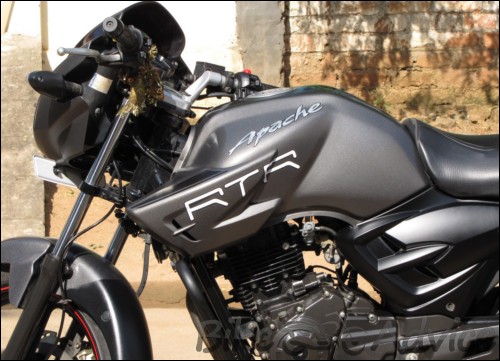 Mileage and Maintenance: My bike has now done more than 12000 kms and I have enjoyed every bit of it. I experienced both the extremities of mileage. I once got a meaner 43 (due to driving on the highway at speeds of about 80-100) and also good mileage of about 54 kmpl (speeds of about 50-60). This was a mixture of both highway and city driving. As I live on the outskirts, I need to take the highways to reach the city. So I can average out the mileage of RTR 160 in general at about 48. Not a bad price to be paid for the awesome power. The only cribbing about is the poor quality service provided by TVS. Though the bike seems to be performing good after a service, the negativities crop back up within a few days or weeks of riding. After having offered such a wonderful bike from its racing stable, TVS should seriously look into the proper servicing of these bikes to add another reason to but the bike on the road.

Conclusion: Hope this review helps in choosing the right bike for you and my take is that if you want a bike that is fun to ride and that makes your friends go Greeeeeen, Apache RTR 160 is the call. It’s truly “Now or Never”. Do remember to wear safety gear while riding.