It’s been quite a while since TVS did something to their RTR series after the 180. Then comes the ABS edition. The TV commercials seems to be a rip of the usual Indian, ‘larger than life’ films which does not highlight the utility of the ABS rather than its race track friendliness. 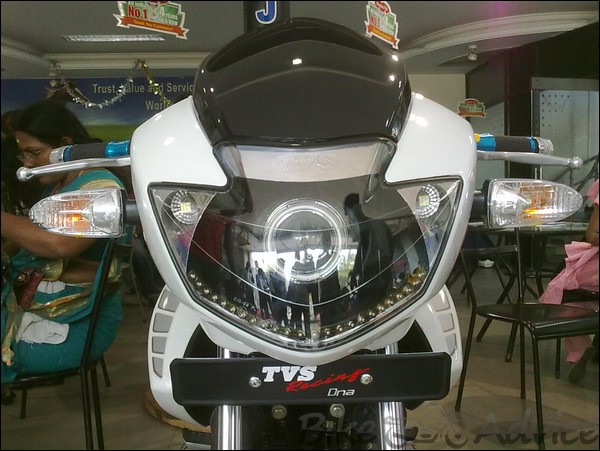 Only time can tell the maturity of the Indian bikers towards tech like ABS being featured in bikes and how many are willing to pay for it. With all the fuss going around the the RTR 180 ABS. TVS have silently released the Racing DNA Edition of the Apache RTR 180. Following the suit of FZ series, the Racing DNA series accessories for compatible with all the RTR’s after the Air Scoop edition. 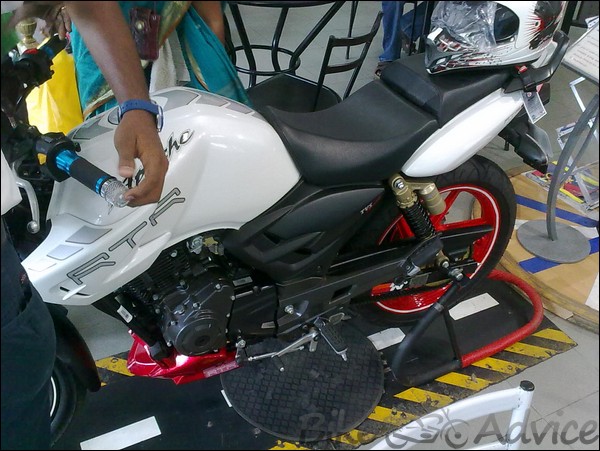 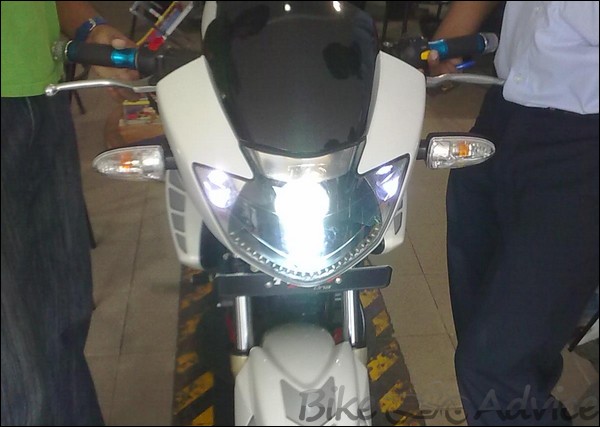 The projection lamp assembly looks too good on the TVS Apache. And kudos to TVS engineers on that front for stacking in the Xenon lamp, which for unforeseen reasons Bajaj have not been able to do on their P220-S. Even the local mechanics where able to stack two of those in R15’s but let’s set them aside because TVS’s setup is tried and tested to work with the Apaches and Factory fitted. 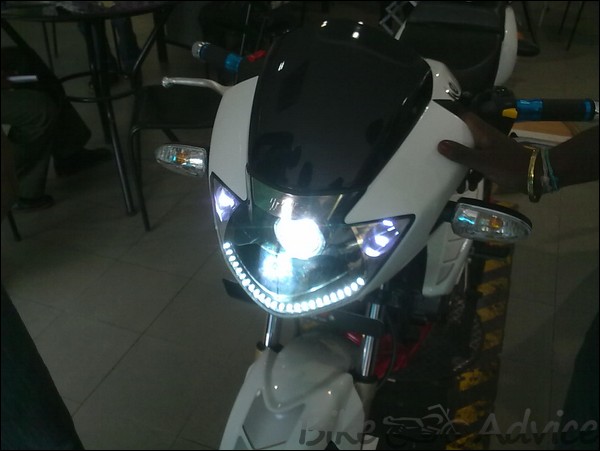 And this setup has a good light throw and should look jaw dropping gorgeous with Xenon lamp in the streets during nights. It has both high and low beam configurations. The switches to enable the LED bling or the Angel lights are neatly tucked on the left hand side of the head lamp fairing. 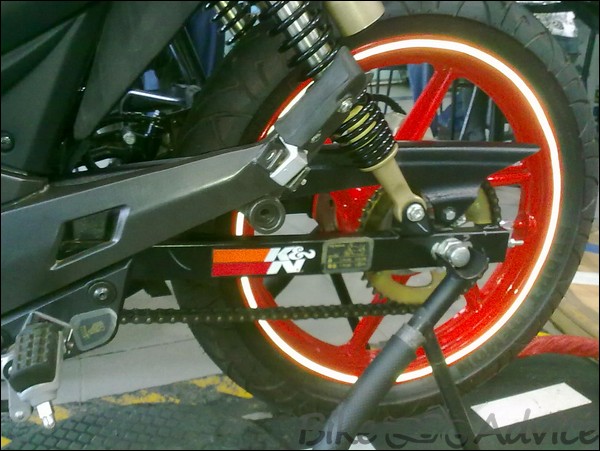 Fitted with Pirelli sport demon 90 section tires seemed impressive on the first look. The tread also seemed favour our Indian roads. Then came the puzzling part. The Tyre said “Pirelli Sport Demon Front”. If the tyre says “front” then it has tread pattern for a front tyre. What is it doing on the rear wheel? 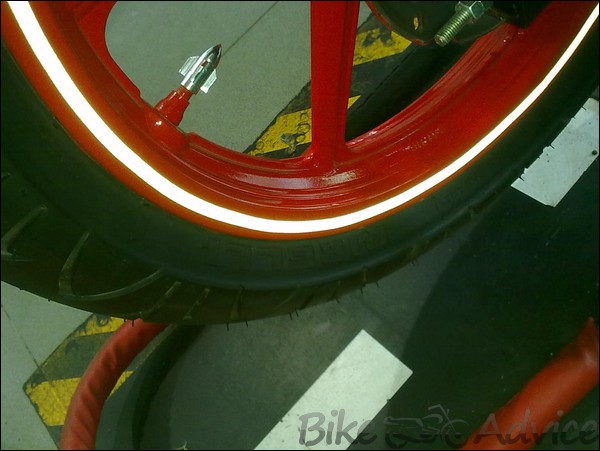 And the worst part is yet to come. The front tyres are still the same old TVS tyres found on all the Apache fronts. We all know what’s pulling the enthusiasm when we hit the corners with engaging RTR is their lame rubbers. And it still has the same TVS tyres. Maybe a Pirelli sport demons upfront and a proper rears would a made a world of difference. 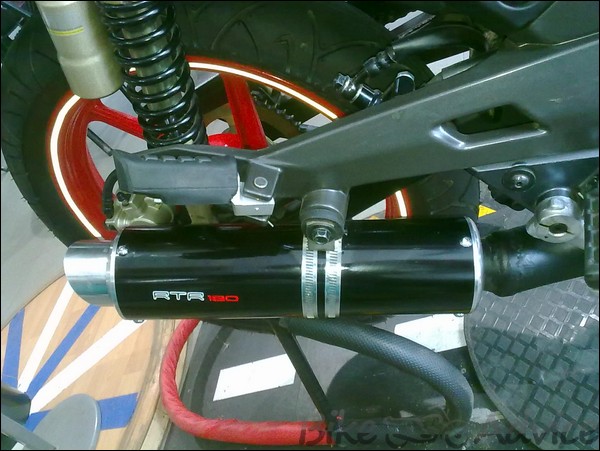 Certainly doesn’t go well with the apache’s overall design. But it does grow on you if keep looking at it from a distance. These will serve you during your track day glory but on streets, don’t think these are road legal as claimed by the TVS rep. K&N air filters don’t need any introduction to bikers. State of the art air filters is sure going to improve the performance figures of the already peppy RTR 180. 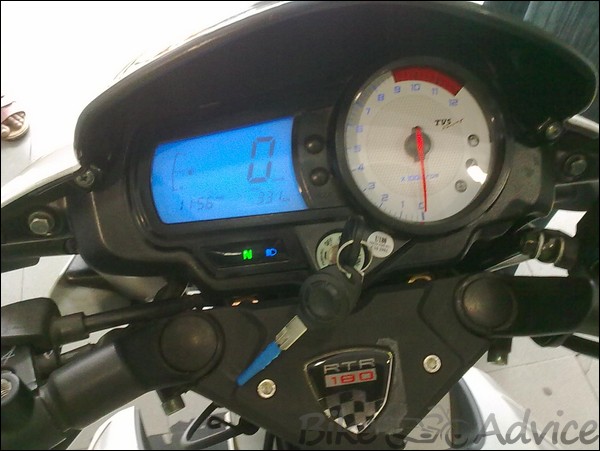 The Design flow seems to be good overall, but the over dosage of LED bling all over the bike with blinkers over the engine has spoilt this great looking machine. That’s not a serious problem because we can choose the accessories we want from the never ending TVS accessories price list. 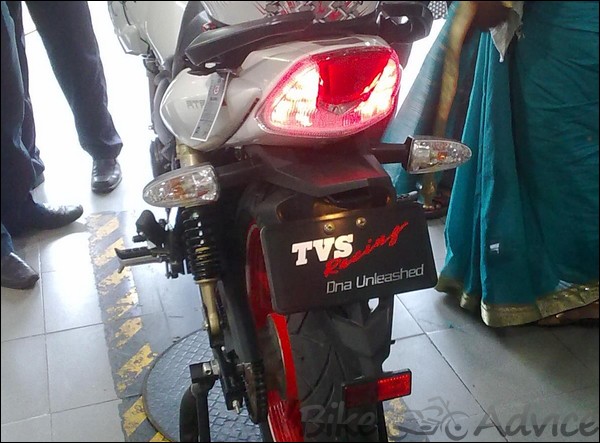 Split seats weren’t looking natural, but seemed to the cheap split of the regular apache seat like the dudes who do their split seats on their P150’s. What grabs the eyes are the sexy looking engine scoops. Red coloured and goes well with the White-black-red design methodology.

It is nice touch by TVS to bring in these accessories for the diehard apache enthusiasts. It sure will make their apaches more attractive. This shows the TVS’s dedication towards their bikes. But all that will make them more competitive in ever growing Indian biking dog fight is to refresh the Apache line up with new designs and to refine their engines from vibes rather than minuscule addition of bhp’s to their bikes. 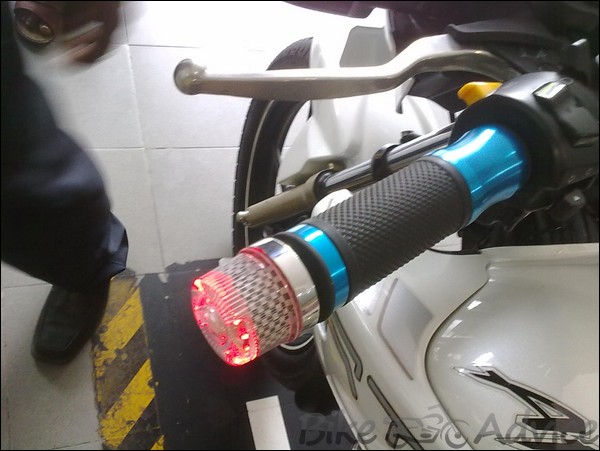 It’s been long since we saw any radical design changes with the apaches. They sure do have a superb design team which did showcase their pedigree at auto expo’s, but still they don’t seem to be translating into proper production models. 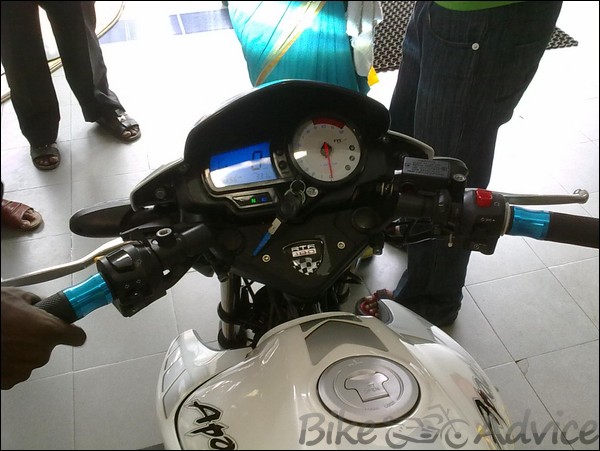 Bajaj has been doing the same thing but they have totally exhausted the life time of the Pulsar design and have to bring in new and radical designs to stay competitive. With their KTM allies they are looking good. And the now that independent Honda’s are looking to go for the kill as well. So, TVS get us some mean machines, shake up the competition, we want a new Apache! 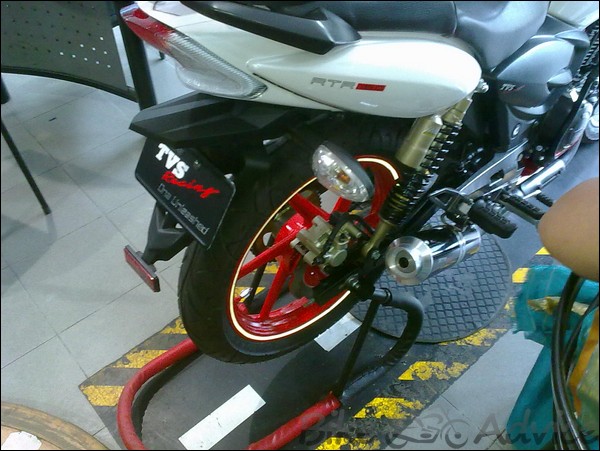 There were no performance figures available with us and neither is there any information on TVS sites regarding this special edition bike. All the accessories can be fitted at the authorized TVS dealership with extra fees. Prices quoted above are approximated. May change from state to state with local taxes. The official price list was not available during this write-up.