I’m personally not a great admirer of naked bikes myself. But this angry monster impressed me so damn much that I keep looking at the bike’s images since last night. 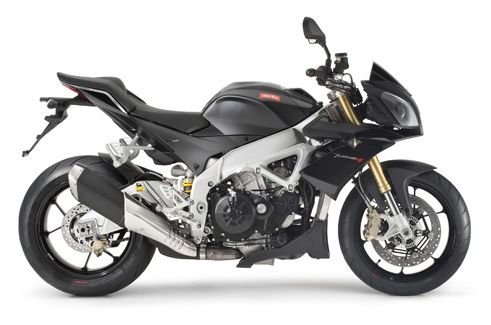 Well, the monster, I’m talking here is the Tuono V4 R, probably the next Aprilia to foray Indian market. With its 65° V4 engine unashamedly flaunted and framed by the brushed aluminium elements of the twin spar frame, the Tuono V4 is a naked clad only with the bare minimum necessary to let you saddle up and teach it to respond to your will.

Adding yet another touch of aggressiveness is the aerodynamic new top fairing tipped with two polyelliptical headlights and LED indicators at the sharp end, which gives the bike the unequivocally mean, daunting stare that you’d expect from a machine with an incredible 167.3 horsepower. 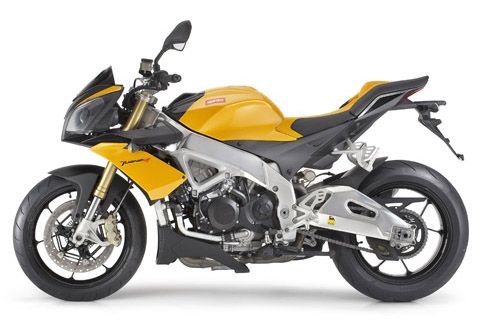 The Tuono V4 R boasts more power than ever seen before in a naked, achieved by reconfiguring the V4 engine of the RSV4 to make it better suited to street use.The features inherited by the Tuono V4 R from the RSV4 include the new exhaust system with bypass valve, which is two kilos lighter than the system used on the RSV4 R, and latest generation Ride by Wire throttle control.

The first three gear ratios are now shorter, while the maximum torque value of 111.5 Nm is on tap at 9,500 rpm: characteristics that make the Tuono V4 R a wild beast at low and mid engine speeds, with the ability to unleash a devastating hurricane of power at higher engine speeds. The Tuono V4 R maintains a clear parentage with the twice SBK world champion in the proportions of the tail fairing, saddle, tank and side panels, and is one of the best examples of Italian motorcycle design from the past decade for its perfect balance between formal beauty and function. 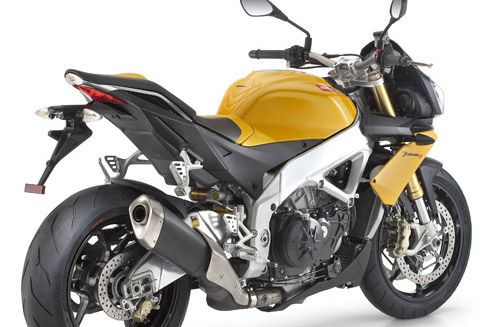 The rider will be taming this beast from a riding position tailored to create a symbiotic relationship between the body and the bike, for unparalleled feedback through the three points of contact – the saddle, footpegs and handlebars.

On the Tuono V4 R however, the rider sits with less weight taken up by the arms, making the bike less strenuous to ride and extraordinarily nimble and controllable on the road. The original design of the saddle, which is generously sized and specifically shaped to comfortably accommodate a passenger, blends perfectly with the style of the side fairings and tail fairing. 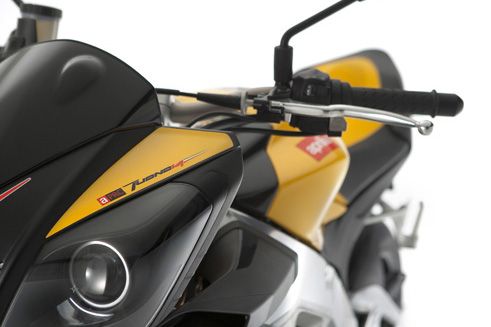 From the vantage point of the saddle and with the broad tapered handlebars firmly in your grip, you immediately discover that the APRC (Aprilia Performance Ride Control) version features an immediately intuitive joystick for rapidly accessing and adjusting the functions of the second generation electronic dynamic control suite developed by Aprilia to let the rider explore the physical limits of riding.

A Choice of three different engine maps selectable by the rider with bike in motion is available viz ‘T’ denoting ‘Track’, ‘S’ denoting ‘Sport’ and ‘R’ denoting ‘Road’. Now, to mention about its engine, the Tuono V4R is the only naked powered by a narrow V (65°) 4 cylinder engine with unique characteristics.

Extremely compact, as slim as a twin-cylinder and installed in an ultra-compact chassis, the 65° V4 engine is the epitome of Italian engineering ingenuity. The Tuono gives away very little to its RSV4 sibling in terms of pure performance, but in exchange offers a greater fluidity that make it more enjoyable and rewarding to ride on the road and when carrying a passenger.

The bike is available in a range of four colour options – Sunlite Yellow, Competit Black and Wing Grey. To mention a last word on its launch and pricing, Tuono V4 R is expected to follow the much awaited RSV4 in India. So, soon after RSV4, we would expect the official announcement for this angry monster. The price is likely to be INR 20 lakh upwards. But this beast deserves that whole lot of currency.