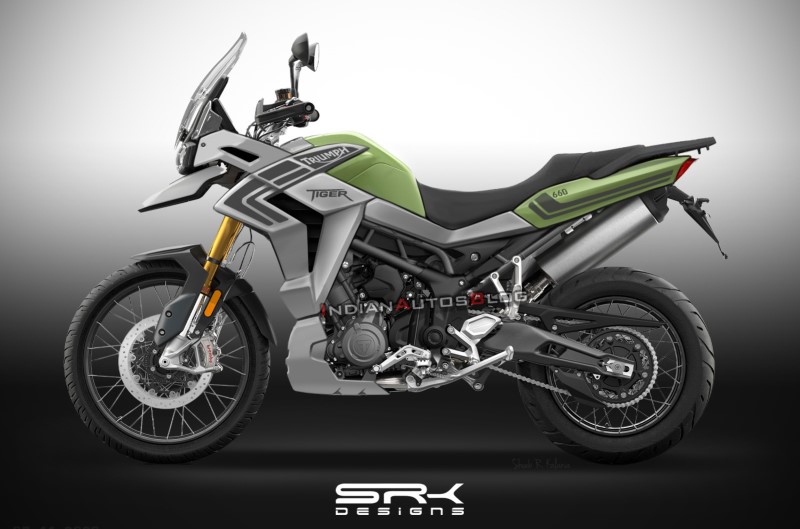 Tiger 660 launch will give Triumph a very worthy mid-capacity Adventure motorcycle that can rival V-strom 650, Versys 650 and others….

The British manufacturer – Triumph recently unveiled its latest middleweight motorcycle – the Trident 660. The bike is built on an all-new platform, which the company will use on its other upcoming motorcycles, as well.

Triumph also showcased two ‘Adventure’ bikes that it plans to launch which will use the same, new platform. In a latest development, an online portal has posted speculative digital renderings of how one of the ADV may look like. Considering the popularity of the Tiger brand, it is likely that Triumph will call it the Tiger 660.

The artist imagines the bike in a green and grey avatar, with mild graphics on different body panels. It has ‘Triumph’ branding on the fuel tank, and Tiger badging on the side, just below it. We can see spoked wheels with discs at both ends, equipped with Brembo calipers. While the front has twin-discs, the rear is shown with a single disc.

The bike also features USD Marzocchi or Showa front forks and a monoshock at the rear. The Trident Tiger 660 is expected to share its engine with Trident, which comes with an in-line 3-cylinder engine. The motor produces a peak power of 81 bhp and max torque of 64 Nm. However, the motor will be retuned to match the adventure application of the Tiger.