The iconic British motorcycle marque, Triumph Motorcycle showcased its 2012 line up for Indian market which includes 7 models ranging from Daytona 675 to Rocket III Roadster at Delhi Auto Expo, 2012. Triumph is in process of setting up 3-4 dealerships in the India this year. The first three dealerships will begin at Delhi, Mumbai and Banglore while the fourth dealership may find its way in Chandigadh later this year. The company will gradually increase its dealership count to 10-12 down the line three years. 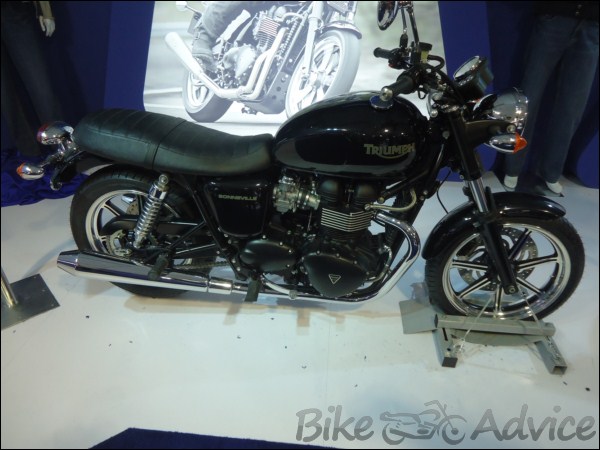 Mr Ashish Joshi, MD, Triumph Motorcycles India, at the Delhi Auto Expo said, “2012 is a very crucial year for Triumph Motorcycles globally as we take our first steps into one of the most evolving motorcycle markets in the world. Our market entry is perfectly timed as Indian riders have been longing to be given the power of choice. With the first of our India lineup, our customer base will get the opportunity to choose from some of the most sought-after motorcycles in the world. We are extremely proud to present these to the Indian consumer.

Triumph model range will start from staggering `5,50,000 thanks to CKD route. The company will import four out of seven motorcycles via CKD (Completely Knocked Down) route from Thailand while three models will be imported on CBU (Completely Built Unit) basis. The four units which will be imported by CKD route are Bonneville, Street Triple 675, Speed Triple and Daytona 675 while the three units which will come through CBU route are Tiger 800XC, Storm, Rocket III Roadster. These motorcycles then will be assembled at Triumph’s assembling plant in India. The location of Triumph’s assembly plant is still not known. Note that CKD route attracts 60% import duty while the CBU route attracts 110% import duty. Triumph motorcycles are known for its consumer centric approach.

“The emphasis for Triumph Motorcycles across markets has always been to give our end-consumers an overall brand experience. With India being a very important part of our global strategy, we will be making conscious efforts to provide Indian customers with everything from genuine parts, unrivaled after-sales services to bonafide Triumph merchandise and accessories, through our dealership principals. This brand philosophy will form the cornerstone for all our plans for India,” added Mr Ashish.

Triumph is planning to retail its motorcycle from the June 2012 and due to its robust image it will surely give tough fight to its Japanese rivals Suzuki, Kawasaki, Yamaha and Honda and American rival Harley Davidson.